Profits keep rolling but growth is elusive for Jazeera Airways

Jazeera Airways is now six months into STAMP, the business programme designed to take the positive momentum from its financial turn-around programme and return the carrier to a growth trajectory. The programme is based around three key pillars: enhancing yields; improving the carrier’s load factors to a modest 68% by 2014; and leading in market share on the routes it operates in and out of Kuwait.

All of this will be achieved while the carrier maintains the same network of 19 destinations out of Kuwait for the next three years.

Even though Jazeera Airways managed to report a record new profit of KWD3.8 million (USD13.5 million) in 1H2012, the first half of the year has not been an unqualified success for the carrier. While it turned its seventh and eighth consecutive quarterly profits, the carrier’s passenger traffic and load factors have suffered due to the regional unrest in the Levant.

Jazeera Airways’ traffic into Syria, and to a lesser extent Lebanon, has been affected by the regional situation. Jazeera operates to three destinations in Syria: Aleppo, Damascus and Dier ez-Zor. It also operates a five times weekly service to Beirut. With the carrier’s network of just 19 destinations, the effect has been significant, although manageable.

Outside of these areas, passenger growth was still subdued. Traffic in the Egyptian market – where Jazeera serves five destinations – was described by the airline as “moderate”, although this is expected to improve in 2H2012. The airline is witnessing improved demand out of its Kuwait hub, although it still believes its home market is suffering from overcapacity from foreign carriers.

Overall, passenger traffic dipped for the airline by 3% in 1H2012. Load factors for the first six months eased to 62%, down 3ppts from the same period in 2011. The fall in traffic levels is particularly notable given the generally improving performance of the Kuwaiti market and the disruptions to traffic in early 2011 due to the Arab Spring. Jazeera estimated in 1Q2011 that it lost 14,000 passengers.

Jazeera’s traffic performance was lacklustre compared to the general momentum in the Kuwaiti market. Traffic at Kuwait International Airport was generally positive during 1H2012 (Mar-2012 data is unavailable), although growth in the Kuwaiti market is generally lagging that of other Gulf region countries. After the sharp decline in passenger traffic experienced in early 2011 traffic has still only bounced back by around 4-8%. 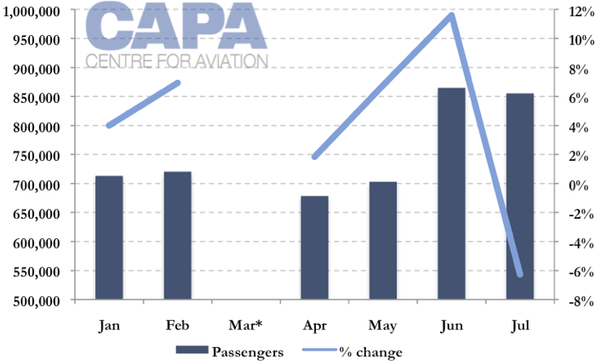 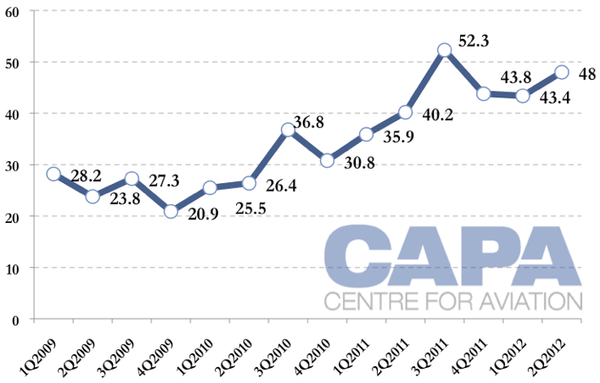 Jazeera Airways has focused aggressively on yield management for the past few years, combining its short booking cycle with nimbleness in capacity management and continual improvement to its service offerings across both economy and business cabins.

The carrier’s revitalised business class offering, launched in late 2009, has done much to improve yields. Although it lacks a dedicated business class seat – instead transforming the middle seat of a three-seat row into a workspace – the airline now offers its business class passengers exclusive check-in counters, business lounge access, an in-flight ‘à la carte’ menu and a 60kg free baggage allowance.

It has also increasingly tailored its offering and booking process to corporate customers, offering a dedicated corporate booking website and discounts for clients spending more than USD100,000 p/a. The carrier’s on-time performance – which it stated was the best in the Middle East in 1H2012 at 94.2% – has also attracted business passengers, as customers have become increasingly frustrated with Kuwait Airways’ poor on-time performance due to its staff shortages and older aircraft.

One of the keys to the carrier’s yield management has been its commitment to maintaining strong market shares on key routes. The carrier has a weighted average market share of 22% across its route network, although Kuwaiti’s open skies policy leaves the carrier open to aggressive regional competition from both full-service and low-cost players.

The Egyptian market has been a particular focus for the airline. In 2Q2012, Jazeera captured 71% market share on the Kuwait-Luxor route, 60% on Kuwait-Sharm El Sheikh, 50% on Kuwait-Assiut and 38% on Kuwait-Sohag. The carrier also had 38% of the market between Kuwait and Cairo, generally the fourth or fifth largest route out of Kuwait International Airport, despite only having debuted on the route in May-2011.

The Cairo route is one of the carrier’s highest yielding routes and was “instantly successful” for the airline. Jazeera Airways also achieved a 31% market share on the Kuwait-Alexandria route in 2Q2012.

The carrier’s 1H2012 revenue growth of 11.8% was based almost solely on its yield performance. Operating costs at the airline were up 5.6%, mostly thanks to fuel costs and the slight increase in flying hours. 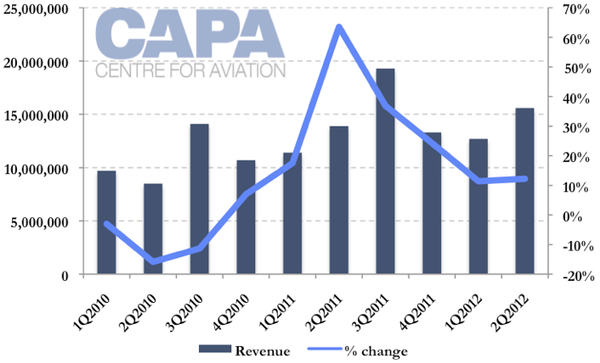 During its turnaround programme, Jazeera Airways worked actively to ensure that it was not just profitable on a full-year or quarterly basis, but profitable from month-to-month. This is an achievement that has been carried through to STAMP, partly thanks to the focus on revenue and capacity management, but also thanks to the stabilising presence of its Sahaab Leasing unit.

While Jazeera Airways was undergoing its turnaround, the group’s Sahaab aircraft leasing arm provided the lion’s share of profit. Jazeera Group acquired full control of Sahaab in 2010, and used the leasing arm to shunt away excess capacity. Six A320s were put on lease to foreign carriers, with aircraft going to Virgin America and Sri Lankan Airlines.

The decision was a profitable one. In 2011 Sahaab Leasing earned 52% of the group’s profit, despite contributing just 12% of overall revenue. Since then, Jazeera Airways has slowly improved its contribution to the overall profitability of the group, even with lower levels of passenger traffic in 1H2012 and fuel price hikes. The airline business contributed 54% of net profit in 2Q2012, and its share continues to improve from quarter to quarter.

Jazeera Airways is looking forward to a strong summer travel season, reporting high levels of consumer confidence and better demand from both business travellers and frequent flyers. It expects “double digit” increases in yields in 3Q2012.

However, concerns about excess capacity in the Kuwait market remain a worry for the carrier. The slow decline of Kuwait Airways has left a vacuum in the long-haul market, which is being filled by other GCC carriers such as Emirates, Etihad Airways, Qatar Airways and Gulf Air. As a result, Kuwait Airways has been deploying more capacity into the short-haul market, with its regional network having significant overlap with Jazeera Airways.

Low-cost competition also presents another worry for the airline. With Jazeera chasing higher yielding passengers and route dominance, it leaves itself vulnerable to being undercut by carriers such as Air Arabia and flydubai, which are both more focused on the lower end of the market. Jazeera Airways runs the risk of being stuck in the middle, unable to compete with fellow LCCs on price while at the same time not able to offer a comparable business product to the Gulf region's fifth freedom carriers which have a heavy presence in the Kuwaiti market.

Oil prices are also a concern. Fuel as a proportion of Jazeera’s costs is expected to go up in 3Q2012, due to the increase in flying during the peak summer period as much as the steady march in prices. While fuel costs dipped in late 2Q2012, oil prices bounced back by nearly 25% over the past two months.

At the moment, oil prices are still well within budget for the carrier, which has a worst-case scenario of USD123 per barrel. However, the global crude oil market remains both volatile and highly uncertain, with significant upside and downside risks to oil prices related to global and regional economic conditions and threats to demand and supply.