What a difference two years can make. After a dismal 2009 and 2010, Jazeera Airways Group has spent the past 24 months undergoing one of the most comprehensive restructuring and turn-around programmes in the industry, transforming its results from deep losses to record profits and marking out a clear path for a sustainable future, aided by its higher-margin Sahaab leasing division that generated 52% of profits in 2011.

Following expansion and development since the carrier launched in Oct-2005, Jazeera had been forced to abandon its second base at Dubai and was struggling in its home market at Kuwait. The local market, opened up by the Kuwait government with its open skies policy, was characterised by overcapacity, low load factors and stagnant yields. During 2009, 44% of all seats operating into Kuwait were unfilled. In 2010, 51% were empty.

At the beginning of 2010, Jazeera Airways had suffered losses in six of the previous eight quarters. 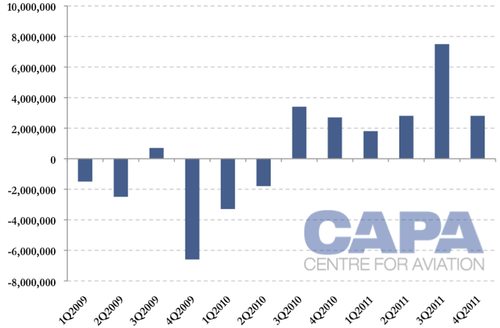 Faced with losses and an almost untenable commercial situation, Jazeera Airways embarked on a radical shake-up of its outlook and operations. Jazeera slashed its capacity, cutting its fleet from 11 to just five aircraft. Excess capacity was redeployed into its Sahaab Leasing unit, which it acquired full ownership of in early 2010, providing stable cash-flow for the company.

Along with the fleet reduction went 30% of the carrier’s staff and much of its route network. Loss-making routes were dropped in favour of a new, customer-optimised network of 18 destinations, based on short-haul routes around two hours flying time from Kuwait. Aircraft utilisation was dropped in favour of more convenient schedules, especially for the corporate market. Jazeera Airways cancelled 25 of the 40 A320 aircraft it ordered, further evidence of its new strategy of profitability over growth.

CEO Stefan Pichler, talking to CAPA, characterised Jazeera’s business model as “LCHR”: low-costs, high revenue. Mr Pichler said Jazeera positions itself to have a service proposition passengers are willing to pay, increasing yields. That strategy he says is more sustainable than having a proposition only of a low cost base. “There will always be a new entrant with lower costs. That’s life,” Mr Pichler said.

(NB: Mr Pichler will be speaking at CAPA's upcoming Airlines in Transition summit in Istanbul on 19/20 April 2012 about Jazeera's evolving business model).

Jazeera moved away from “pure” LCC practices to hybridise its model, emphasising to passengers free luggage allowances and a European-style business class (the middle seat becomes a workspace), which Mr Pichler says is responsive to Jazeera’s targeted market. “They are more hooked on product,” he said, adding that price sensitivity is not as strong. Other LCCs serving the Gulf cater more heavily towards migrant workers.

Having a premium product also allowed Jazeera to access the lucrative Cairo market. Despite unrest there last year, yields are growing and profit is increasing, Mr Pichler said.

Yields at the carrier rose almost 46% over 2011 and have almost doubled over the six quarters since the formal introduction of the carrier’s turn around plan in mid-2010. 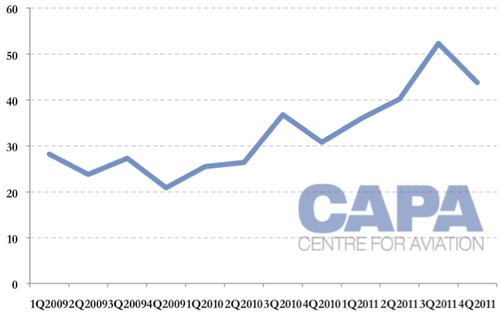 The yield increase at the carrier has been linked to a number of factors by Jazeera Airways. The first is the downsizing of its A320 fleet and its tighter capacity management. Tied to this has been the airline’s network optimisation, not only in cutting loss-making routes but also in retiming the network to provide better customer convenience, albeit at the cost of some aircraft utilisation and crew optimisation. The carrier has also cited its excellent on time performance – above 95% for 2011, which it claims it the best in the Middle East – as attracting higher yielding business traffic.

Passengers down, yields increasing, profits up

By 3Q2010 – less than six months into the turn around - Jazeera Airways returned to profitability, reporting a net result of KWD4.4 million, its best single operating quarter in its history, although it was boosted by its leasing division. Since then, the carrier has reported six consecutive quarterly profits. 2011 was the most profitable in the carrier’s history, with a net profit of KWD10.7 million. 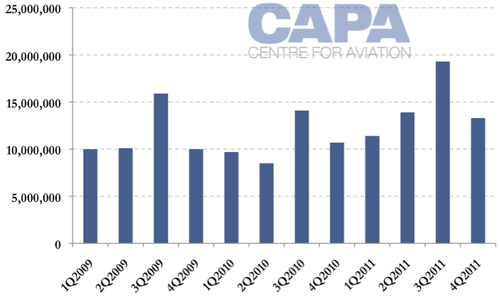 Large capacity cuts in 2010 followed by a 28% capacity cut in 2011 but passenger numbers were only down by 12%, evidence of the over-supply in capacity. Load factors rose by 7.2 percentage points, to 65.2%, a figure Jazeera intends to further improve.

The capacity situation in Kuwait was also helped by the failure of Kuwait National Airways, parent of Wataniya Airways, in 2011. However, Jazeera Airways also reported a decline in confidence in the market following the collapse of the carrier.

The short booking cycle – allowing the carrier to quickly adjust fares – has also helped yields. Jazeera Airways also seeks to operate a majority market share on most of the routes it operates, giving it significant pricing power.

Also aiding the dramatic yield growth has been a number of enhancements to the carrier’s product and service offerings. While Jazeera firmly remains a low cost airline, like most LCCs it has found that increasing the sophistication of its model allows it to enhance revenues. The carrier has added new menus – rotated monthly – and expanded its free baggage allowance for both economy and business passengers. It has also added a basic loyalty programme. It is also enhancing its IT environment to increase passenger convenience; the carrier has become the first in Kuwait to offer web check-in and plans to roll-out a mobile booking service.

The revenue situation has not been without its downsides though. 2011 saw revenue impacted by regional unrest. In late 2010, Jazeera Airways implemented a high-level Emergency Response Team (ERT) to allow it to react swiftly to changes in its regional markets. The ERT is still in place and continues to monitor the situation in Syria. The carrier recently pulled 12 of its 18 weekly frequencies from routes to Aleppo and Damascus, redeploying it to Dubai, Jeddah and Cairo. According to Mr Boodi, these high demand alternative destinations have “flourished” and are in need of more capacity.

Cost containment has been a continual objective at Jazeera Airways. With capacity cut by 28% in 2011, non-fuel operating costs were reduced significantly. However, higher fuel prices pushed Jazeera Airways’ fuel bill up by KWD4.5 million, pushing overall costs for the year up 3.3% to KWD43 million.

Jazeera Airways has no hedging policy and has not indicated it intends to implement one, relying instead on fuel surcharges to offset higher oil prices. In 2011, Jazeera’s jet fuel costs were up by 37%. Fuel accounted for 35% of costs during the year.

The carrier managed to mitigate some of the impact through fuel surcharges, as well as taking advantage of the 10% discount on jet fuel offered in Kuwait. The carrier uplifts more than 90% of its fuel in Kuwait, indicating it typically departs Kuwait with enough fuel for the return leg to avoid paying higher foreign rates.

Also weighing on results in the final quarter was foreign exchange, with the carrier suffering a KWD500,000 forex loss in the final quarter, compared to a KWD877,000 forex gain in the same quarter in 2010. However, for the full year currency fluctuations worked in Jazeera’s favour, resulting in a KWD768,000 addition to its net result.

The upswing was a major increase in both operating and net profit. The carrier achieved an operating result of KWD14.9 million in 2011, compared to just 1.1 million in 2010. Its net result turned around from the KWD2.8 million loss of 2010 to a net profit of KWD10.6 million, including a KWD529,000 tax gain.

Underpinning the turnaround has been the vertical integration of Sahaab Leasing into Jazeera Airways Group. Chairman Marwan Boodai labelled the acquisition as an “ideal business combination”, providing steady revenue and cash flows for the business and strong profits. CFO Donald Hubbard said that both Jazeea Airways and Sahaab Leasing are making good profits at “every level” and contributing to the bottom line.

In 2011, the leasing arm contributed just 12% of Jazeera Airways Group’s revenues, but 52% of profit before tax. The leasing market is “down” according to Mr Hubbard and leasing rates for aircraft may be lower in 2012.

The leasing arm has 12 aircraft placed and delivered: 6 with Jazeera Airways, 4 with Virgin America (earning it USD155 million) and two with SriLankan Airlines. The leasing arm’s fleet will remain at six in 2012 but in 2013  take delivery of another two aircraft, taking its total to eight.

New aircraft in the group are first deployed to Jazeera Airways with older aircraft then taken out and placed with Sahaab Leasing.

Jazeera looks to return to growth

Its turnaround plan is now officially over, having achieved its goal of putting the airline on a secure financial footing, with both stable and sustainable yields and consistent profits. At the beginning of the year, Jazeera Airways began its Strategic Master Plan (STAMP), a three-year programme to ensure that the airline stays as a profit-making entity, while at the same time bringing back some growth to the airline.

Under STAMP, Jazeera Airways will keep its network to 18 destinations, focusing instead on adding frequency on its highest-demand and most profitable routes while gradually building load factors. 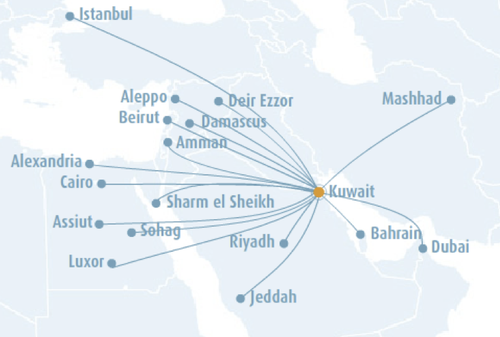 Fleet growth will also be modest. Jazeera Airways took delivery of its sixth A320 earlier this month, the sole new aircraft it will accept this year. The carrier will take delivery of just one more aircraft over the three-year duration of STAMP.

The group’s balance sheet is also healthier, with the external debt to equity ratio reduced from 5.9:1 in 2010 to 3.2:1 in 2011. Cash reserves and deposits have increased to KWD16 million, while working capital has improved to KWD12 million. With a pending rights issue to increase capital, which still awaits final regulatory approvals, and an improved balance sheet, the carrier believes that it is adequately capitalised for the future.

While Sahaab accounted for just over half of Jazeera’s profit and at a higher margin than the airline, Jazeera expects the airline to contribute the “lions share of profit in the future”.

Mr Pichler is pleased with Jazeera’s achievements, especially considering the market Jazeera competes in. “All around you are government airlines,” he says. Having achieved quarterly and annual profitability, Mr Pichler said Jazeera now aims to be profitable every month, noting January is slow.

The carrier’s outlook for 2012 is for mild growth over 1H2012, demand increase in 3Q2012 and then growth easing somewhat in 4Q2012. The carrier is looking to either sustain or increase yields. It will continue to focus on cost containment, but without a fuel hedging programme fuel prices are a concern, although the government already exerts influence on fuel prices.