Business is booming for LCCs in the Middle East. The two oldest low-cost airlines in the region – Air Arabia and Jazeera Airways – have both reported profitable first quarters, as the regional political environment cools and oil prices begin to trend back from their highs earlier in the year.

Both airlines have positive outlooks for this year. Jazeera Airways just reported its seventh consecutive quarterly profit – a record run of profitability for the airline – and aims to continue the success with its new strategic management plan (STAMP). Air Arabia achieved a double-digit increase in profit during the first quarter and the carrier plans to continue to enter new markets and launch new business ventures this year.

A much reduced and more tightly focused Jazeera Airways emerged from a 2010 Turn Around Plan (TAP). With its fleet cut to six aircraft and its network reduced to 19 destinations, most of them less than two hours flight time from Kuwait, the airline has managed significant improvements in revenue and yields at the expense of passenger volume.

The carrier reported an operating profit of KWD2.3 million (USD8.3 million), up 25.5% year-on-year. Net profit was KWD1.2 million (USD4.3 million), a 17.8% improvement over the same period last year, in what is traditionally a weak quarter for the airline. 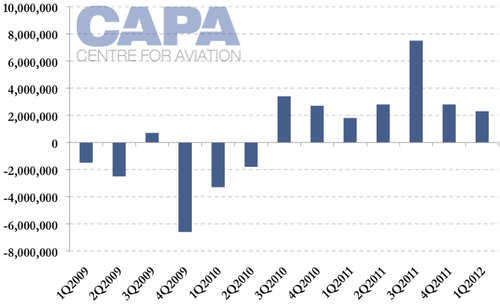 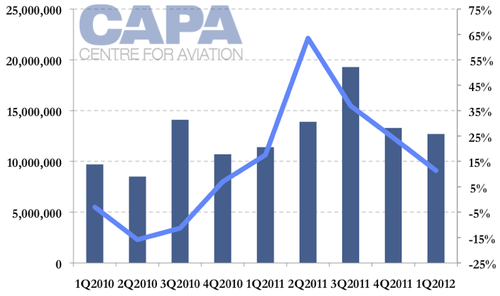 Overall capacity increased by 1.5%. Due to the lower traffic and higher capacity, passenger load factors during the quarter eased to 61%, down from 64% for the same quarter last year. Improving load factors remains one of Jazeera Airways’ long-term goals under STAMP, with a three-year goal of 68%.

Jazeera Airways has offset cost increases by dramatically improving yields through its low-cost, high revenue approach. It has added frills such as meals and increased baggage allowance and paid for ancillary services where appropriate to capture more revenue from passengers. Its route selection has also focused on higher yielding destinations, with the carrier reporting strong performance on new destinations such as Cairo. 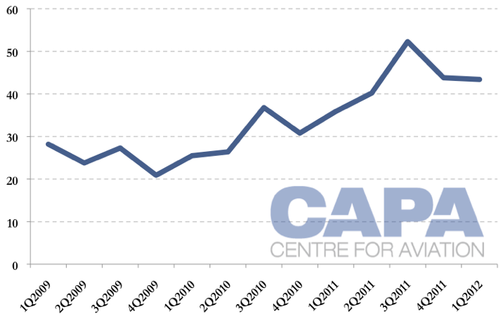 It is also overcoming some of its seasonality related issues by diversifying its passenger base to ensure a steadier level of traffic. 42% of passengers flying with the airline are travelling on holiday plans, 34% are visiting friends or relatives and 22% are travelling on business. The remaining 2% are religious passengers.

The carrier also makes sure that it has a dominant market position on the majority of routes it operates out of Kuwait. Jazeera Airways more than matches Kuwait Airways – its only Kuwait-based competition – on the majority of the 12 routes they compete on. Only on Jeddah and Riyadh does the carrier fall behind its local competitor in terms of weekly frequencies.

A key to overcoming seasonality is the Sahaab aircraft leasing business. Jazeera Airways group leases six A320s, which provides steady cash flows and profits. Jazeera Airways took delivery of a new A320 during the quarter, shuffling an older A320 to the leasing unit.

The carrier managed to decrease its overall liabilities by USD28 million in reaction to shareholder concerns. Overall external debt/liabilities ratio was reduced to 3.0 and the carrier has increased its cash reserves from USD28 million to USD67 million. The airline is also still committed to its planned rights issue, which has been delayed into 2Q2012 due to red tape.

The carrier launched a new Kuwait-Najaf route, following a new bilateral air services agreement between Kuwait and Iraq. Under STAMP, the carrier had announced that it did not plan to expand beyond 18 routes for three years. However, the Iraq market was an opportunity too good to miss and the carrier reacted quickly to an official invitation to become the first carrier to operate Kuwait-Iraq services in two decades.

Jazeera’s entry into Iraq follows that of other carriers, which are experiencing significantly strong yields on routes into Iraq.

Jazeera Airways sees Najaf as a “gateway” destination in the country and could add more routes, although it has not announced any formal plans. Under STAMP the carrier ostensibly plans to keep its network at 19 destinations, with “moderate” network expansion afterwards.

Air Arabia reported another solid quarter, with a net profit of AED49.2 million (USD13.4 million), an increase of 11.6% on the previous corresponding period. The carrier stated that the result reflects its “strong operating performance, leading market share and solid profitability path”. 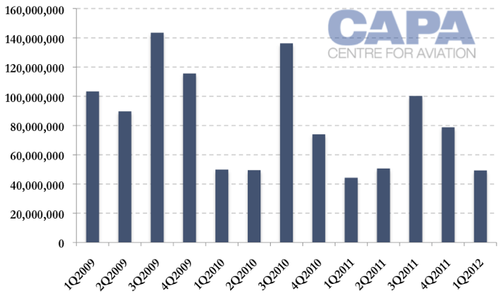 Revenue was AED621 million (USD169.1 million), an increase of 21.1% compared to the AED513 million (USD139.7 million) in 1Q2011. Fares and yields at the carrier continue to improve, with the carrier stating it will continue to look at new ways to grow its ancillary revenues. 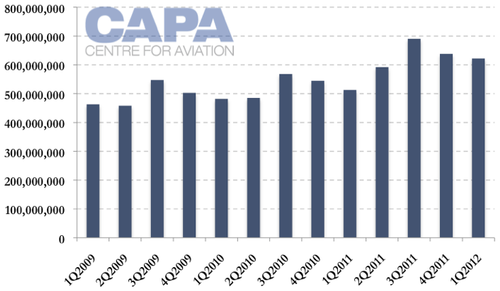 With capacity growth outweighing the increase in RPKs, average passenger load factor was 82%, down 3 ppts from the same period in 1Q2011. However, average load factor is on a generally upward trend for the airline, after slipping below 80% during 4Q2011.

The carrier added six new destinations during the quarter: Gasim, Yanbu, Moscow, Yekaterinburg, Donetsk and Kharkiv. Air Arabia and flydubai have both been busily entering various Eastern European markets over the past six months, attracted by strong tourism and migrant worker traffic potential. With three hubs in operation, the carrier operates to 73 destinations in 32 countries. 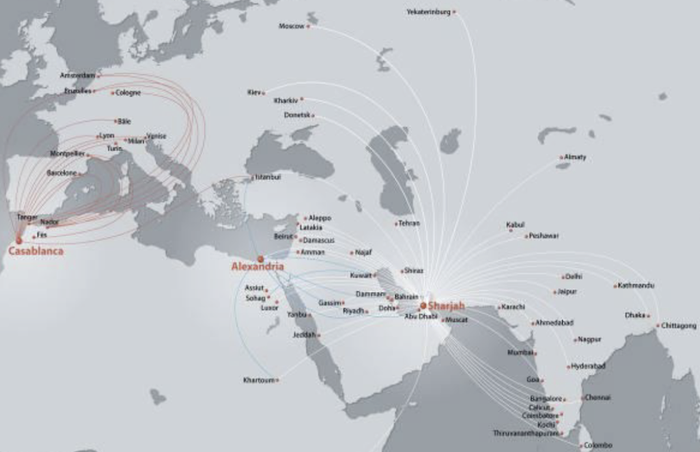 Despite the political unrest across the region, both North African hubs are still operating at load factors well above 70%.

Air Arabia controls 49% in the Egyptian operation, with the majority share owned by Traveco Group. The Egyptian unit operates to seven destinations, through the Middle East and Europe and also operates tourist charter flights into Western Europe and Russia.

The carrier owns 41% of the Moroccan operation, with the remainder split between various local investors. Air Arabia Maroc serves niche destinations in Europe through several locations in Morocco, with its main hub at Casablanca and flights from Nador, Fez and Oujda.

With a horizontal bilateral agreement between Morocco and the EU, Air Arabia plans to use the Casablanca hub to expand operations into Western Europe and seek further flying rights to Africa to link it to Europe through Morocco. The carrier recently launched scheduled charter flights between Nador and Palma de Majorca, which will continue through to the end of Mar-2013.

The carrier took delivery of a single new A320 in 1Q2012, the ninth of 44 it ordered from Airbus in 2007. The airline will receive five more A320s in 2012, in line with growth plans that will see it add another four to five destinations during the year.

The airline did not report operating costs, but the price of oil continues to be a challenge, even if it has eased in recent weeks. In early May-2012, Air Arabia CEO Adel Ali said the carrier has no plans to introduce a fuel surcharge but will "continue to monitor the fuel price movement closely".

Air Arabia’s long-term plan will see it continue to expand operations from Sharjah to Central Asia, Russia, the CIS and Eastern Europe. At its Alexandria hub, the carrier plans to continue to grow organically to serve destinations in the Gulf region as well as Africa and Europe.

The consistent profitability of two LCCs is also good for their shareholders. Both paid significant dividends on 2011’s results. In Apr-2012, Jazeera Airways shareholders approved the distribution of a 10% dividend as bonus shares (10% of paid-in capital, or 10-for-100 shares) thanks to the record profitability the carrier achieved in 2011. The issue also raised the carrier's share capital to KWD24.2 million (USD86.9 million)

Maintaining the momentum through 2012

Jazeera Airways’ STAMP outline calls for only modest expansion of the carrier’s fleet and no expansion of its route network beyond the existing 19 destinations until 2014. Its focus is clearly on staying a commercially viable and profitable carrier in the crowded Kuwaiti marketplace. The carrier is forecasting another strong year in 2012 – in line with a growing Kuwaiti economy – and expects a mild increase in demand in the second quarter, a seasonal increase in demand in the third quarter and then a mild fourth quarter.

Air Arabia’s chairman Sheikh Abdullah Bin Mohammad Al Thani said that despite the regional political instability and sustained high fuel costs that continue to challenge regional carriers, “the appeal of air transport, and especially the low-cost model pioneered by Air Arabia in the region, remains strong". CEO Adel Ali stated the carrier is on track to achieve a profitable 2012 despite rising fuel costs, saying, “we have budgeted for a profitable year. And we are on track to achieve the same”.