Another round of new routes to Iraq is occurring over the next few months, continuing the wave of expansion by international carriers as the country's economy develops and trade links grow. After almost two decades of limited activity, commercial aviation is playing an important role in the redevelopment of Iraq.

Between the early 1990s and 2000, Iraq was faced with heavy international sanctions, effectively preventing commercial travel. Royal Jordanian was the first international carrier to resume operations to the country, initially operating irregular cargo and charter services and then an on-again, off-again scheduled passenger service. It was only after the fall of the Hussein regime in 2003 that commercial airlines began to return to the country in any numbers.

What began as a trickle of airlines and a handful of routes become a torrent at the end of 2008. More than 20 airlines have added services to Iraq over the past three years. In the past six months alone, flydubai, Etihad Airways, Emirates, EgyptAir, Pegasus Airlines, Turkish Airlines and (the now defunct) Viking Hellas have all added new services or extra capacity into the country. Qatar Airways and Jazeera Airways are set to enter the Iraqi market in the next few months.

Iraq’s main hub at Baghdad International Airport now sees regular scheduled operations from two-dozen foreign carriers. More than half of these airlines have added Iraq to their networks since 2009. 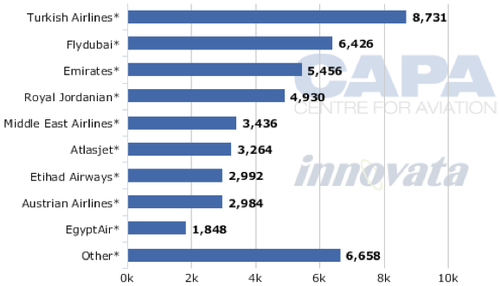 The largest international carrier into Iraq is Turkish Airlines, operating more capacity than any other carrier to more Iraqi destinations. In early 2011, Turkey and Iraq signed an aviation cooperation agreement, to encourage traffic between the two countries. The agreement has seen the fast-growing Turkish Airlines expand its network to six destinations in Iraq, most recently adding service to Mosul. The carrier also flies to Baghdad, Erbil, Sulaimaniyah and Najaf.

Ethnic Kurds make up approximately a fifth of the Turkish population, making Iraq’s northern Kurdistan Autonomous Region an important market to serve. Another Turkish carrier, AtlasJet, operates to the Kurdistan cities of Sulaimaniyah and Erbil. The airline has been so encouraged by the potential of Iraq that in 2011 it announced its intention to launch an Iraqi subsidiary, Atlasjet Iraq. The plan is to have the new carrier operational by May-2012, offering domestic services.

A third Turkish carrier, Pegasus Airlines launched services from Ankara to Erbil in Nov-2011. The carrier is reportedly looking at expanding the route or adding links from Istanbul and Izmir.

The UAE is Iraq’s most important single country market, with flydubai, Emirates, Etihad Airways and Air Arabia all offering services between the two countries. With Iraqi Airways' international operations limited to just a dozen destinations, the UAE and Gulf countries are important for Iraq, providing vital links to the rest of the world.

Dubai-based LCC flydubai recently selected Iraq as a cornerstone market, opening four routes into the country. The carrier first launched services to Iraq in 2010 with routes to Erbil and Sulaimaniyah. This year it added two new routes – Baghdad and Najaf – and now offers 14 flights per week between Iraq and the UAE. The routes were launched as part of flydubai’s drive to add connectivity to “underserved airports”.

Emirates operates to Basra and Baghdad and offers dedicated freighter service into Erbil. It launched flights to Iraq during Nov-2011. After just three months in the Dubai-Baghdad route, the carrier found demand strong enough to increase frequency from four to seven times weekly.

Etihad Airways began flying to Iraq in Apr-2010 with a daily service to Baghdad. Erbil added to the network five weeks later. In 2011, the carrier handled more than 100,000 passengers between Abu Dhabi and these two cities, with the Baghdad route enjoying “strong growth”. The carrier plans to add a new route to Basra in mid Apr-2012, as part of its strategy to target underdeveloped routes. Etihad's CEO, James Hogan, said that Iraq’s “surging" economy represents a "good opportunity to add even greater depth to our schedule”.

Qatar Airways has also announced a number of new routes into Iraq. From May-2012 it will add service to Erbil, while Baghdad will be linked from Jun-2012. The carrier will initially operate four weekly frequencies on both routes, but could add more if demand warrants it.

Also lining up to operate to Iraq is Jazeera Airways. The Kuwaiti and Iraqi governments successfully concluded bilateral air services negotiations earlier this month, granting Jazeera Airways permission to operate services to Najaf. Jazeera intends to launch the route within the next six months. The LCC will be the first Kuwaiti airline to operate a scheduled service between Kuwait and a city in Iraq. The bilateral discussions also granted services to other Iraqi cities, including Mosul, Baghdad and Erbil.

Also in the GCC, Gulf Air has noisily lamented the political differences that forced it to pull its four routes to Iraq. Along with Iran, Gulf Air had been developing a high-frequency network of underserved regional routes. Its Iraq operations were among its most profitable flights.

Western European carriers were slightly slower off the mark in returning to Iraq, with flights initially limited to charter carriers and smaller airlines looking for high growth markets. Nordic Airlines – now bankrupt – started Iraq charter flights in early 2009. It was followed later in the year by Blue Wings, which operated charter services from German destinations. Viking Hellas, a subsidiary of Viking Airlines, added Athens-Baghdad service in early 2010, but the carrier has since ceased operations. French carrier Aigle Azur commenced Baghdad flights in Nov-2010, but has since pulled off the route.

It was not until Austrian Airlines launched Vienna-Baghdad service in Jul-2010 that a major scheduled western European carrier operated to Iraq. Even then, Austrian pulled off the route temporarily, due to weak demand, before resuming it in mid-2011. The carrier also operates to Erbil.

South Asia next on the map?

Indian carriers are also reportedly interested in services to Iraq. The present bilateral agreement allows up to 800 seats per week from either country. India is yet to take a final decision on designating a carrier to operate to Iraq, although there are reports Jet Airways and Air India have expressed interest in operating to Baghdad, Karbala and Najaf.

Iraqi Airways on a long process to recovery

National carrier, Iraqi Airways, is in the process of a major rebuilding effort, having been almost moribund for most of the last two decades, in the face of international sanctions. The carrier resumed international operations in 2004, and has slowly been adding to its domestic and international network. Iraqi Airways commenced services to Karachi in 2009 and launched Najaf-Mumbai service on 18-Mar-2012. Southeast Asia offers a strong potential market according to the airline, while domestic Iraqi services are also returning. Earlier this year, the carrier launched Baghdad-Mosul service, marking the resumption of services between the two cities after a nine-year gap.

A recent agreement between Iraq and Kuwait, which settled the question of reparations to Kuwait Airways over the 1990 Iraqi invasion of Kuwait, will aid the carrier immensely. The conflict in the early 1990s saw most of the assets of Kuwait Airways seized or destroyed. After the war Kuwait claimed reparations of more than USD130 billion, of which more than USD20 billion are still outstanding.

(Kuwait Airways had been seeking more than USD1.2 billion in reparations, and was embroiled in a series of legal battles to ensure the payment. A USD300 million settlement agreement was announced in 2009, but Kuwait Airways continued to seek another USD1 billion from Iraq. Attempts were made to seize or freeze Iraq Airways assets, including bank accounts in various countries and 10 Bombardier CRJ900 regional jets purchased by Iraq in 2008. In May-2011, it seized USD130 million in funding from Iraqi Airways' bank accounts in Amman, following orders issued by a Jordanian Court. The threat to the carrier was serious enough that in 2010 the Iraqi Government began preparations to dissolve Iraqi Airways and sell all its assets to avoid the claims. The dissolution never occurred and a plan to replace the state-owned carrier with private airlines was never realised.)

The rebirth of commercial air travel in Iraq has been fitful, with security and infrastructure concerns paramount, but continues to gather momentum. There is strong potential for air transport development in Iraq and the country views its aviation sector as a key driver of economic growth and provider of jobs. With stability and improving trade links, commercial airlines in the region are now putting Iraq near the top of their route development priorities. Further afield, European carriers are also contributing to a surge in traffic at Iraqi airports.

There are still issues to overcome though. Iraq suffers from a lack of aviation training and qualified aviation personnel in most fields. Aviation infrastructure in the country remains underdeveloped, mostly due to a lack of funding. The main international hub at Baghdad has capacity for just five million passengers p/a, a figure that will expand to 7.5 million p/a when it completes its new terminal.

With the reparations issue now settled, Iraqi Airways can turn its full attention to growth. The carrier faces very little competition domestically, with just a couple of smaller private carriers offering mostly charter services. Iraqi Airways has been slowly developing its regional network, augmenting it with a few key European routes. It is integrating CRJ900 regional jets into its fleet, with deliveries of new 737-800s to start this year.

The 2012 Iraqi budget allocates approximately USD1 billion to transport projects, and more investment is expected from the private sector and via international aid grants. Earlier this year, the Iraqi Transport Minister Hadi al-Ameri made an appeal for foreign private investment in Iraqi transport projects, including rebuilding airports and helping to develop a major rail network.

With stability returning in the past few years and an improving security environment, national rebuilding is well under way. Investment money and new businesses are pouring into Iraq. Up to USD50 billion in airport and logistics infrastructure related projects are being considered for development across the country. This bodes well for the continued expansion of aviation activity to, from and within Iraq.