LCCs grab 10% of seats in the Middle East, but growth is slowing

The LCC phenomenon in the Middle East is entering the home stretch of its first decade. The importance of the LCC market in the Middle East has grown steadily since the launch of the region’s first LCC flights by Air Arabia in Oct-2003, but the growth has not been as high as initially anticipated, as carriers can attest to.

There are also some smaller carriers in the region that are filling the gap between LCCs and full service airlines. Bahrain Air markets itself as a “premium value” carrier, including some LCC elements in its model but also offering two seating classes – including an all-new business class cabin – and a correspondingly greater emphasis on service and product levels. RAK Airways, based in the UAE emirate of Ras Al Khaimah, also has low cost elements, but like Bahrain Air has adopted a hybrid model between full service and low-cost airlines.

LCCs have 100 new aircraft on order in the Middle East

Between them, regional LCCs operate close to 75 aircraft, with around another 100 on order, a figure that will likely grow only moderately in the near future. flydubai CEO Ghaith al Ghaith confirmed in Dec-2011 that the carrier is considering an order for the new narrowbody aircraft being offered by Airbus and Boeing. Most other regional LCCs are not expected to order more aircraft anytime soon: Air Arabia still has 44 aircraft on order, while NAS Air has 27 more due to it. Jazeera Airways only has three aircraft on order but plans to expand its fleet only marginally over the next four years (the company also operates a leasing division, which will add to its fleet).

LCCs in the region account for around 10% of all regional seating capacity: 11.8% of intra-Middle East capacity and 8% of seats to/from the region. 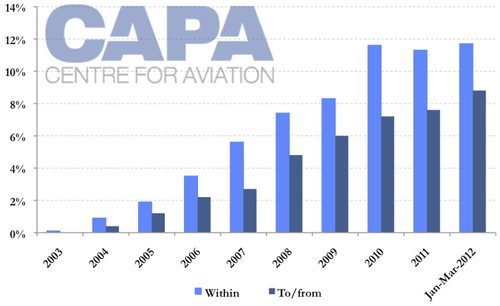 Source: CAPA – Centre for Aviation & OAG
*Year to Mar-2012 based on schedule data

LCCs have built a notable presence primarily in foreign worker and, to a lesser extent, leisure markets in South Asia, North Africa and southern and eastern Europe. They are increasingly expanding into underserved markets in Africa and Europe, as well as expanding capacity into promising Middle Eastern tourism destinations as regional governments continue to develop and promote their local tourism markets.

Adapting to the regional situation

LCCs in the Middle East serve a multi-segment market. On one hand, they have adapted their model to cater to regional clientele. They offer plenty of frills, such as leather seats, generous baggage allowances, loyalty programmes, reserved seating and complimentary meals. However, regional LCCs also target worker, leisure and VFR traffic.

No proper premium product if offered on the region’s LCCs, although Jazeera maintains a European-style business class in which the middle seat is blocked.

With their higher density configurations, Middle East LCCs have extensively targeted the migrant worker and VFR traffic flows from North Africa and South Asia, particularly into the Gulf region.

The past few years have seen a slowing of the explosive growth rate of LCCs in the Middle East. A number of factors, including high barriers to entry, protectionism in favour of state-owned carriers and the regional unrest to hit the region, have all contributed to this slow down.

The 2010 and 2011 regional unrest was particularly unfavourable for LCCs, due to their higher exposure to local traffic and tourism traffic. Several carriers slowed their expansions and Air Arabia delayed the launch of planned new regional hubs in absence of stable political and economic climates.

However, the larger market situation in the region has not been particularly amenable to LCC development. During the 2008-2009 international economic downturn, several regional full service carriers found themselves with excess widebody capacity, which they then deployed on regional routes, making it difficult for LCCs to compete.

While the 2010 failure of Saudi Arabia’s Sama has been the only notable LCC closure in the region, several regional low-cost carriers have scaled back their operations in the face of overcapacity, losses and regional unrest.

Jazeera Airways was forced to abandon its Dubai hub in 2008 due to political pressure. A dramatic reversal of its early solid profitability forced it into drastic action. In 2009, the carrier slashed its fleet from 11 to five aircraft and reworked its network, reducing its workforce by a third in the process, and slashed its aircraft orders. Its leasing division accounts for the minority of revenue but the majority of profit compared to the flying division.

Also slowing proliferation of LCCs is the region’s lack of viable secondary or smaller alternative airports or terminals, a mainstay of LCC operations in Europe, North America and the Asia Pacific. While there are exceptions to the rule – such as Air Arabia’s operations at Sharjah – most regional LCCs operate from crowded major hubs where they are forced to share space with regional full service carriers.

These airports typically lack the mindset that LCCs are looking for to support their operations. Prior to its bankruptcy, Sama pointed out the unfavourable situation with Saudi airports. Air Arabia has also pushed for the opening up of more airports in the Middle East.

Aviation in the Middle East region remains highly regulated and airline ownership is concentrated in government hands. As a result, many regional full service carriers enjoy strong levels of government assistance and protection from competition. Barriers to entry remain high.

Unlike in Asia Pacific or Europe, Middle East full service carriers have generally avoided experimenting with LCC subsidiaries. There have been a few experiments with LCC-style operations by state-owned airlines. Gulf Air launched its Gulf Traveller subsidiary in 2003, but wound it up in 2007 under the weight of the carrier’s shifting ownership. Etihad Airways launched an all-economy service at the end of Oct-2010, but has limited it offering to just two A320s, operated to Alexandria, Colombo, Damascus, Thiruvananthapuram, Calicut and Peshawar, all high volume, low yielding destinations focused on labour traffic.

While typically brash Qatar Airways CEO Akbar al Baker has made references to being able to establish a LCC subsidiary should the carrier feel threatened, the scale and volume of the region’s network carriers – Qatar as well as Emirates and Etihad – allows them to enjoy low-cost bases. The gap between that and what a LCC could potentially achieve is not strong, and further eroded by establishment costs of new branding and duplication of services, staff and infrastructure.

What is evident for potential growth in the region is carriers focused on serving the region with convenient schedules. While the network carriers have a strong regional presence, their services are aimed to primarily connect with long-haul flights and often have low frequency at ideal travel hours. Gulf Air is explicitly targeting this niche while the region’s LCCs benefit indirectly from passengers looking for greater schedule options. Their presence, and want of frills, may indicate why regionally-focused carriers like Jazeera offer more frills than Air Arabia, which focuses more on the extremely price-sensitive migrant worker market.

The appearance of LCCs has added some momentum to the deregulation process in the Middle East, but liberalisation, as elsewhere, is a slow process. When Jazeera Airways launched in 2005, it was the only wholly privately owned carrier in the region and since then has been joined by only a handful of others.

The LCC market is atypical in the Middle East in that it is has a high level of private ownership: Jazeera Airways and NAS Air are wholly privately owned while Air Arabia has a 55% public shareholding. Government ownership in LCCs in rare, but the emirate of Dubai has sole ownership of flydubai as part of the emirate’s multi-pronged aviation development strategy. The emirate of Sharjah has retained 45% ownership in Air Arabia.

Outside of the LCC market, private ownership is slowly coming to airlines in the Middle East. Jordan sold a majority stake of Royal Jordanian Airlines in 2007 and a number of state-owned carriers are in the midst of privatisation processes.

With such low market penetration, the Middle East market is still ripe for exploitation by low-cost carriers. Regional governments are slowly opening up to the possibilities that LCCs offer for their local travel and tourism markets, with liberalisation underway in previously highly protected markets such as Saudi Arabia, Jordan and Lebanon. Privately owned LCCs in the region have shown that they can, with time, be properly and profitably run, a fact that should trigger more LCC growth in the Middle East.