While five Philippine airports are connected with South Korea, Manila and Cebu dominate the market. The Cebu-South Korea market has particularly grown rapidly, and South Korea now accounts for 60% of total international traffic at Mactan-Cebu, the Philippines’ second largest airport.

The rapid growth in the Philippines-South Korea market will be discussed at the 2019 CAPA LCCs in North Asia Summit, which will be held in Cebu on 24/25-Jun-2019.

Philippines-South Korea capacity has nearly doubled over the past seven years. In Sep-2011 there were 28,000 one-way weekly seats.

The Philippines is a popular destination for Korean travellers

South Korean visitor numbers to the Philippines and year-over-year growth: 2009 to 7M2018 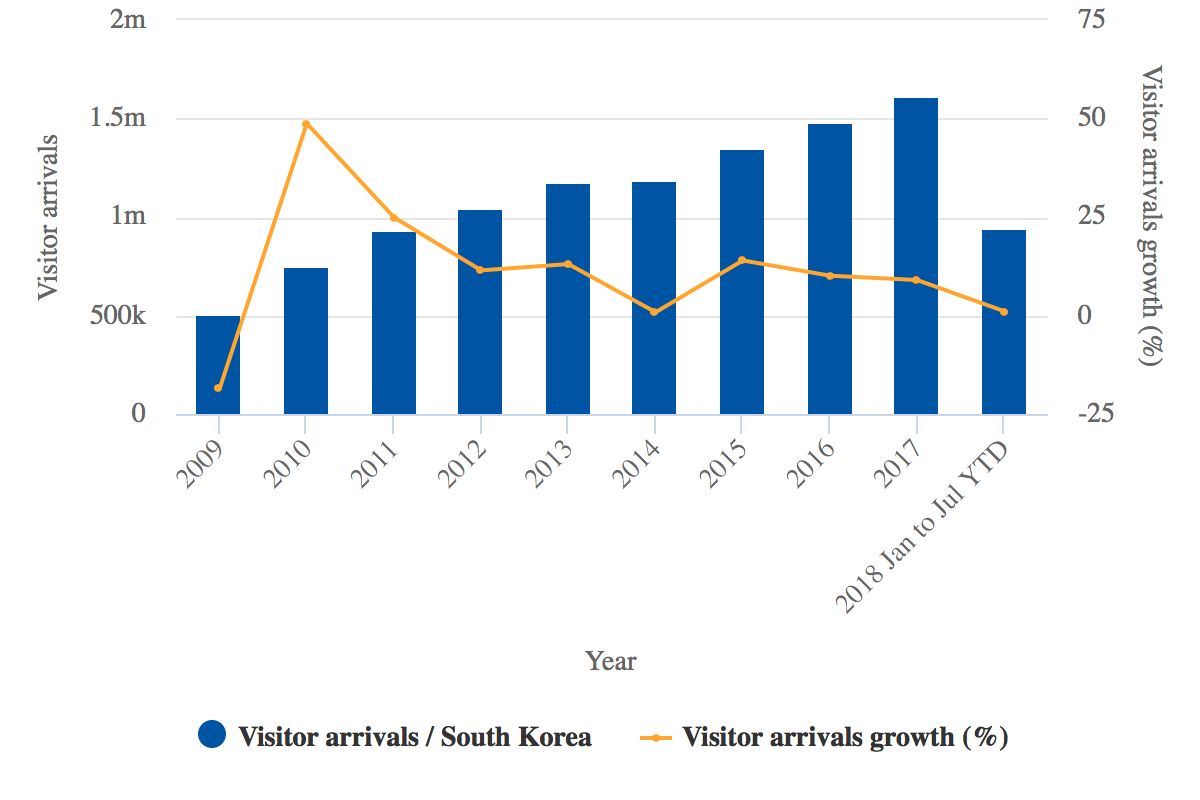 Source: CAPA – Centre for Aviation and Philippines Department of Tourism.

Visitor numbers this year have been impacted by the closure of Boracay Island, which is one of the most popular tourist destinations in the Philippines. Boracay is closed for six months – from Apr-2018 to Oct-2018 – for an environmental clean-up. South Korean visitor numbers to the Philippines declined in the March to July period after increasing by 16% in the first two months of 2018.

Clark is a fast growing alternative airport to Manila, while Puerto Princesa in Palawan and Tagbilaran in Bohol are emerging alternative beach destinations that are starting to become popular with South Korean travellers.

It is no surprise that Manila and Cebu account for most of the Philippines-South Korea traffic, given that they account for more than 90% of total international seat capacity from the Philippines. However, Cebu is punching well above its weight when it comes to South Korea. While Manila has seven times more international traffic than Cebu, Manila has only slightly more traffic from Korea.

Six Korean airlines serve the Cebu-Korea market, along with four Philippine carriers. Jeju Air is the largest foreign airline at Mactan-Cebu by capacity and currently operates two daily services from Seoul, along with one daily service from Busan. Jin Air, Korean Air and Air Busan are also among the six largest foreign airlines in the Cebu market.

Cebu and the Central Visayas are popular destinations for Koreans. Cebu also attracts significant South Korean traffic heading to secondary and tertiary destinations in the Philippines. Mactan-Cebu has more than 25 domestic destinations and provides passengers with a better transit experience than Manila.

South Korea has a relatively small Filipino population compared to the other main international markets from the Philippines. There are approximately 60,000 Filipinos living in South Korea.

Philippines-South Korea services also generate some sixth freedom traffic. Seoul Incheon is a particularly popular transit hub for Philippines-North America traffic. The US has the largest overseas Filipino population and Canada has the third largest.

LCCs account for more than 40% of Korea-Philippines capacity (the exact share fluctuates depending on the time of year). Five of South Korea’s six LCCs and both Philippine-based LCCs currently serve the Philippines-Korea market – which is hardly a surprise, given the large size of the market and the fact that all Philippines-Korea routes are easily within range of narrowbody aircraft

LCCs have accounted for most of the growth in the market over the past seven years. During peak periods there are now nearly 30,000 weekly one-way LCC seats from the Philippines to South Korea. Seven years ago, there were less than 13,000 weekly one-way seats during the peak season. Two LCCs have since entered the market, and all five of the LCC incumbents have expanded.

AirAsia, Jin Air and Jeju Air have expanded the fastest and are now the largest LCCs in the Philippines-South Korea market. Each has close to a 10% share of total capacity and each has the number one position in the market, depending on the time of year.

AirAsia currently has up to 6,300 weekly one-way seats in the Philippines-South Korea market. All these seats are generated by Philippines AirAsia (PAA), which launched in 2012 and completed a share swap with Zest Airways in 2013, essentially resulting in a merger. Zest was subsequently rebranded Zest AirAsia and was formally folded into PAA in 2016. Seven years ago Zest was still independent, and had between 2,000 and 4,500 weekly one-way seats to South Korea (depending on the time of year).

Note: Zest AirAsia was originally known as Zest Airways and was not part of the AirAsia Group until 2013.
Source: CAPA - Centre for Aviation & OAG.

Full service airline capacity has also expanded, but not as rapidly as LCC capacity.

Of the FSC competitors, PAL has expanded the fastest, broadly doubling capacity over the past seven years. PAL is the overall market leader, with approximately a 21% share of total Philippines-South Korea capacity – or 24% when its regional full service subsidiary PAL Express is included.

Pan Pacific Airlines, a small Philippine airline following a charter/leisure model, has also served the Philippines-South Korea market since 2017. Pan Pacific currently operates from Cebu to Seoul and Muan. Pan Pacific also operated from Kalibo to Busan and Seoul before the closure of Boracay.

Note: Zest AirAsia was originally known as Zest Airways and was not part of the AirAsia Group until 2013.
Source: CAPA - Centre for Aviation & OAG.

There are 11 routes connecting from the Philippines to South Korea

Manila-Seoul and Cebu-Seoul combined account for more than half of the total Philippines-South Korea capacity. Manila-Seoul has more capacity, but Cebu-Seoul is the more competitive – with service from eight airlines compared to six airlines for Manila-Seoul.

There are currently 11 routes connecting the Philippines and South Korea. With the resumption of Kalibo-Seoul and Kalibo-Busan, in late Oct-2018, there will still be 11 routes as PAL is planning to suspend Puerto Princesa to Busan and Seoul when Boracay reopens.

Besides Manila-Seoul and Cebu-Seoul, none of the Philippines-South Korea routes are served by more than three airlines.