Mactan-Cebu International Airport has emerged as a major gateway to the Philippines, more than doubling international passenger traffic over the past four years. The airport is poised for more rapid international growth following the opening of a new international terminal.

Mactan-Cebu opened Terminal 2 in Jul-2018, expanding the airport’s capacity from 4.5 million to 12.5 million annual passengers. Mactan-Cebu was previously operating well above capacity, handling 10 million passengers in 2017. The existing terminal is now being used for domestic operations, which have also been growing rapidly in recent years, while all international flights have been relocated to Terminal 2.

The airport was privatised in late 2014, when a joint venture consisting of India’s GMR and the Philippine company Megawide Construction took over operations and committed to building the second terminal. Construction of the 65,500 metres terminal began in Jul-2015 and was completed in just three years.

Mactan-Cebu passenger traffic has increased by more than 50% over the past four years. The airport is on pace to handle 11 million passengers for the full year in 2018, compared to less than 7 million in 2014. 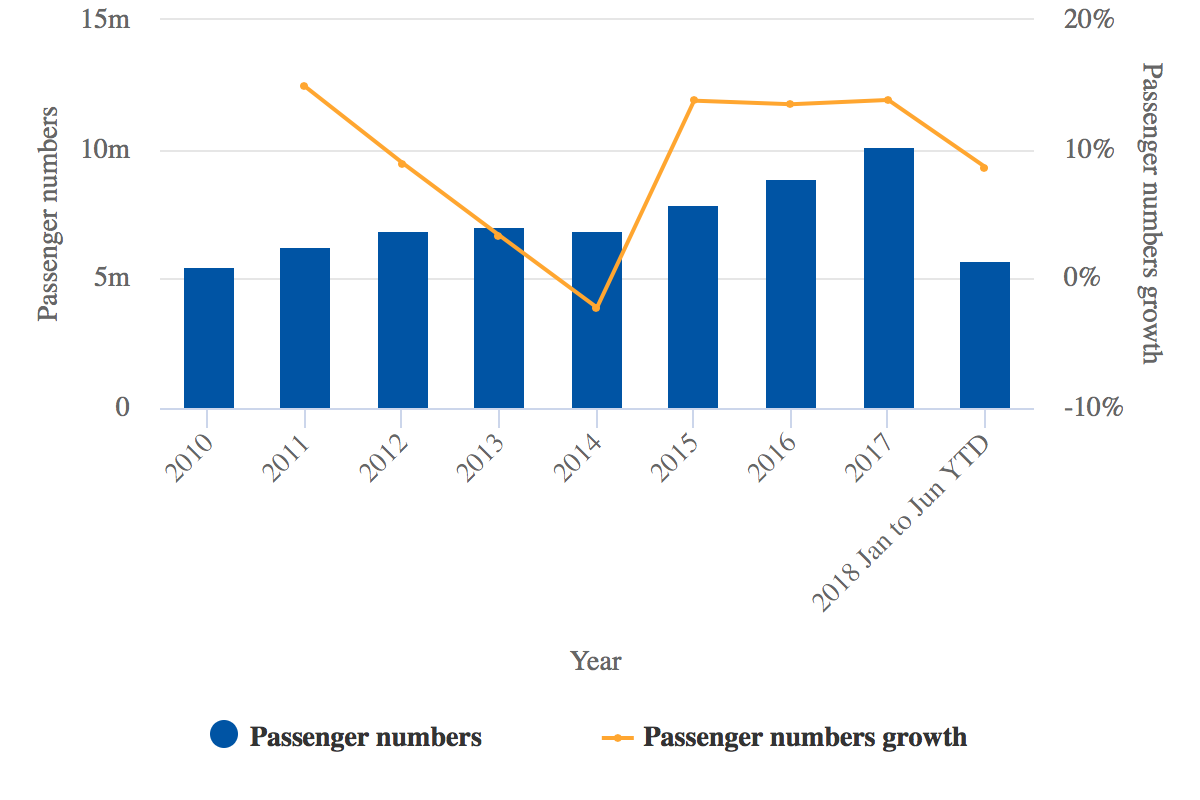 Mactan-Cebu has particularly experienced rapid international growth, driven by a slew of new services from both local and foreign airlines. The airport is on pace to handle approximately 3.7 million international passengers in 2018, compared to only 1.7 million in 2014. 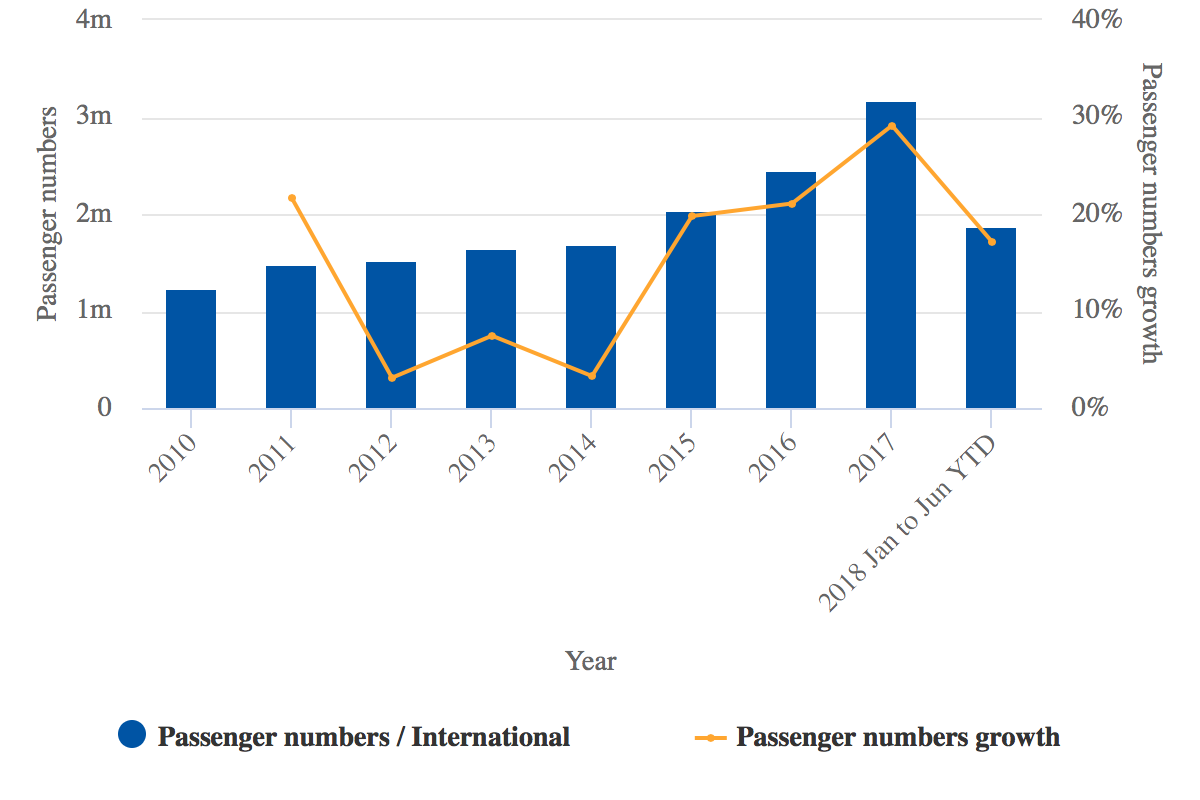 The airport’s domestic traffic has also increased rapidly in recent years, but not as rapidly as the international traffic. Cebu’s domestic traffic was up by 12% in 2015, by 11% in 2016, 8% in 2017 and 5% in 1H2018 – in all cases a few percentage points slower than the overall traffic growth. 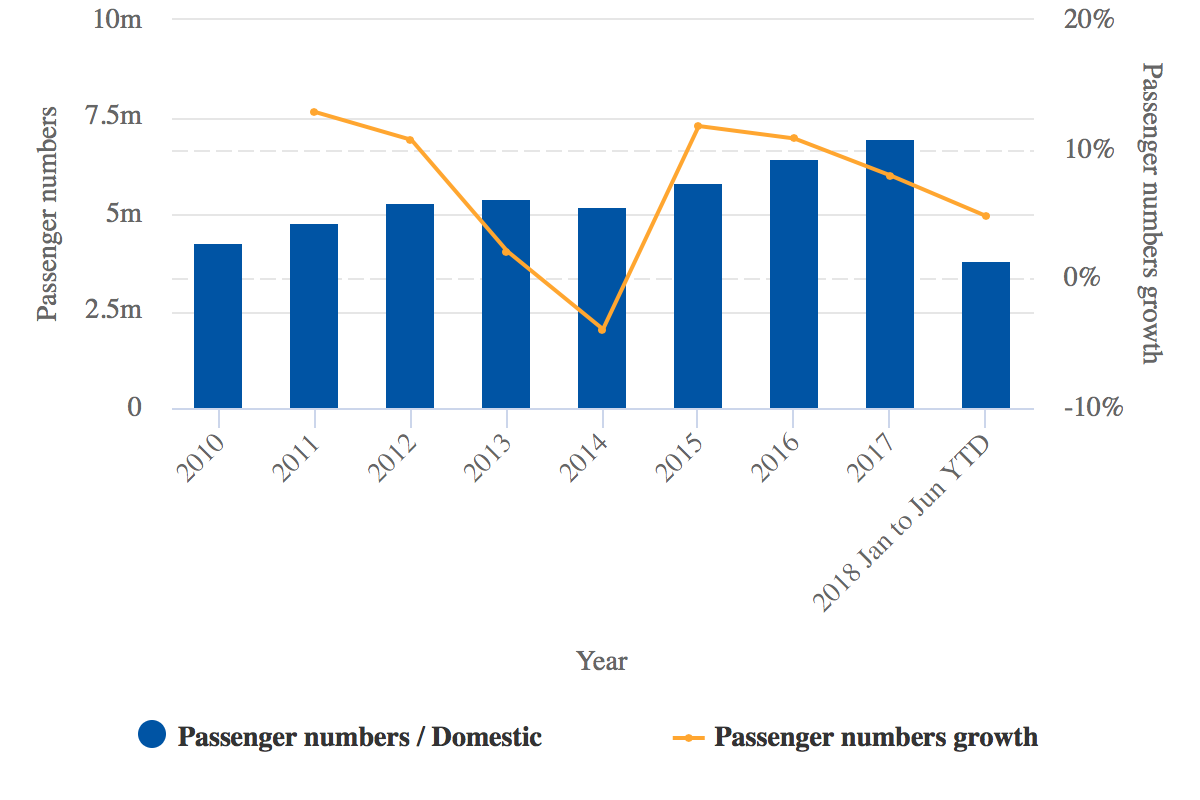 Cebu Pacific is the market leader, but PAL and AirAsia have been catching up

While Cebu Pacific has been able to maintain its status as Cebu’s largest airline, its market share has been declining in recent years due to more rapid expansion from the PAL Group and PAA.

The Cebu Pacific Group’s current share domestic seat capacity is approximately 44%, compared to 68% in Aug-2014. Cebu Pacific has slightly reduced its domestic capacity in Cebu over the past four years.

The small independent regional airlines AirSWIFT and Air Juan also operate from Mactan-Cebu but account for a less than 1% share of domestic seat capacity, according to CAPA and OAG data.

AirAsia and PAL focused on Cebu as their fleets expanded

Cebu Pacific took a hiatus from expanding its narrowbody jet fleet over the past few years. However, the airline is resuming narrowbody expansion, which will give it the capacity to resume domestic expansion over the next few years at Cebu and other markets.

PAA and PAL have continued to add aircraft over the past few years and have been focusing expansion at Cebu – and, to a lesser extent, other secondary airports – due to the slot constraints at Manila.

PAA and PAL have also pursued international capacity expansion at Cebu over the past few years, as has Cebu Pacific. However, the number of international seats added is relatively modest compared to the domestic expansion, and foreign airlines have accounted for a large share of the growth in Cebu’s international market.

PAL and PAA are the largest international airlines at Cebu

PAA is currently the largest international airline at Cebu by capacity, accounting for a 16% share of international seat capacity. However, this is temporary, and PAL will retake the top position later this year.

PAA currently has close to 16,000 weekly international seats at Cebu, compared to less than 8,000 at the beginning of this year. However, PAA is planning to reduce its international seat capacity at Cebu to 9,000 seats in Oct-2018 after Boracay Island reopens. Most of PAA’s international expansion at Cebu in 2018 has been driven by the transfer of North Asia routes from Kalibo during the six-month closure of Boracay.

In Nov-2018, the PAL Group’s share of international seat capacity will be approximately 21%, compared to 12% for both PAA and Cebu Pacific. Foreign airlines account for most of the remaining 45% of capacity as the other two Philippine airlines operating international flights from Cebu – Pan Pacific Airlines and Royal Air Charter – are very small.

Korea is the largest international market from Cebu and currently accounts for 60% of Cebu’s international seat capacity. Six Korean airlines serve the Cebu-Korea market, along with four Philippine carriers.

North Asia overall accounts for 85% of Cebu’s international seat capacity, according to CAPA and OAG data. Southeast Asia has a 10% share, and the Middle East accounts for the remaining 5%.

LCCs now account for close to half of Cebu-North Asia capacity and account for nearly 60% of total capacity at Mactan-Cebu. Fittingly, Cebu will host the next CAPA LCCs in North Asia Summit on 24/25-Jun-2019.

Middle East capacity is expected to grow by early 2019 as Qatar Airways has unveiled plans to resume services to Cebu. Qatar suspended services to Cebu in 2012, when the Cebu market was much smaller, and has included Cebu among a list of four new Southeast Asian destinations to be launched in its current financial year.

Qatar has not yet announced a launch date for Cebu but Mactan-Cebu Airport expects Qatar to launch Cebu-Doha service by the end of 2018. The airport is also reportedly working to secure new long haul routes to Europe from Finnair and Turkish. A new link with Australia is also a priority, with Brisbane being most likely the first Australian destination.

Mactan-Cebu also hopes PAL will resume service to Los Angeles, which it operated thrice weekly from Mar-2016 to Mar-2017 with A340s. PAL has been considering potentially using its new fleet of A350s to resume Cebu-Los Angeles; however, it is somewhat reluctant to use the new aircraft type from Cebu because the market consists primarily of leisure passengers, whereas the configuration of its A350s has a premium focus. PAL’s 777-300ERs are less premium-focused, but are too large for the Cebu-Los Angeles route.

While Cebu will likely be able to attract some new long haul services, North Asia will continue to account for most of its international growth. In particular, China is a fast growing source market for tourism in Cebu and the Central Visayas region. Mactan-Cebu expects five more China routes will be launched by early 2019.

Mactan-Cebu already has 12 routes to mainland China but China has less than half the capacity of Korea, although Korea has only four routes. South Korea is the largest source market for the Philippines and the Central Visayas region, but China has been growing faster. Chinese visitor numbers to the Philippines increased by 43% in 2017 and another 44% in the first five months of 2018, while South Korean visitor numbers increased by 9% in 2017 and only 3% in the first five months of 2018.

Mactan-Cebu has the ability to attract transit traffic

Mactan-Cebu has clearly benefitted, and will continue to benefit, from rapid tourism growth in Central Visayas. The airport is also well positioned to benefit from tourism growth in other regions of the Philippines due to its wide domestic network, which now includes 25 destinations.

For passengers heading to secondary and tertiary destinations in the Philippines, Mactan-Cebu offers a much better transit experience than Manila. Philippine carriers are also keen to encourage international passengers to transit at Mactan-Cebu rather than congested Manila, where airlines are better off focusing on the local market, given the limited ability to add capacity.

The recent opening of Terminal 2 further widens the gap between Mactan-Cebu and Manila, providing an even better experience for connecting passengers. The new terminal is spacious and has a unique resort style design. Extensive retail and food options are available, providing connecting passengers a level of service that has not previously been offered at any Philippine airport.

Other Philippine airports have also been expanding their international networks and new international airports are preparing to open, including a new airport on Bohol Island (which is also located in Central Visayas). However, the other secondary international airports in the Philippines are much smaller, they do not have extensive domestic networks, and will attract a relatively small share of visitor arrivals with a focus on niche local markets.

Mactan-Cebu has the capacity to continue growing

Mactan-Cebu has successfully positioned itself as the second major gateway to the Philippines, adding two million annual international passengers over the past four years. Manila is still much larger and has seven times the international passenger traffic. However, Mactan-Cebu will gradually close the gap with Manila because it has invested in the capacity to support growth, whereas Manila remains constrained.

Terminal 2 has ample capacity to support further international growth for the next several years. Even if Mactan-Cebu’s international passenger traffic doubles again, the new terminal will still be operating slightly below capacity.

However, GMR-Megawide will need to continue investing in expansion to remain ahead of the growth curve. The original (now exclusively domestic) terminal is still operating above its design capacity, despite all international flights moving to Terminal 2.

The airport will need to expand its domestic terminal capacity and soon will also have to start planning a further international expansion if international traffic continues to grow rapidly.