Annual seat capacity between Munich Airport and long haul destinations has jumped by almost a quarter over the past two years. Since last summer there have been route launches from Munich to Bogotá by Avianca, to Banjul (Gambia) by Corendon Airlines Europe, to Osaka by Lufthansa, and to Dallas by American.

Eurowings is planning four US route launches from Munich in 2020: Anchorage, Phoenix, Las Vegas (operated by Eurowings in summer 2018 after Condor had operated the route in summer 2017) and Orlando.

Munich is a significant second long haul hub for Germany after Frankfurt, whose North America and Asia Pacific capacity has remained virtually unchanged over the past two years.

In the week of 19-Aug-2019, Munich's seat capacity to North America is 38% of Frankfurt's and to Asia Pacific, it is 39%. Lufthansa will increase its A380 fleet at Munich from five to seven aircraft from summer 2020, matching its Frankfurt A380 numbers.

For the purposes of this report, long haul destinations from Munich are taken to be those in North America, Latin America, Asia Pacific and Africa excluding North Africa.

North America is the largest of Munich's long haul regions, accounting for 53.2% of its long haul seats in 2019, according to CAPA analysis of data from OAG. 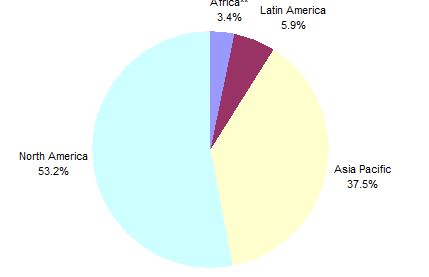 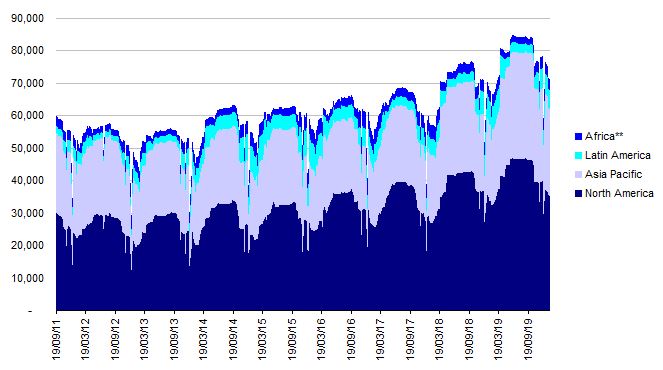 Over the past two years combined, long haul growth will have been 23.6%, compared with 8.7% for seats to all destinations.

Between 2017 and 2019 more than 770,000 additional long haul seats will have been added, with the two largest long haul regions each contributing approximately half of this number. 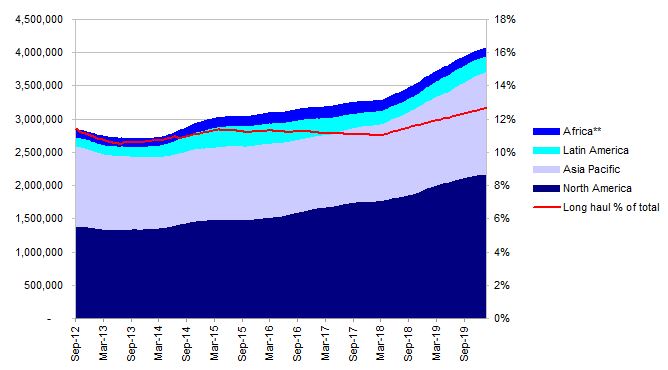 The faster growth in long haul seats compared with total capacity from Munich over the past two years has led to an increase in long haul's share of total seats. This was broadly 11% between 2012 and 2017, fluctuating within a fairly narrow range. However, it rose to 11.7% in 2018 and is set to be 12.6% in 2019.

The number of long haul destinations has fallen since 2017

Although the numbers of seats on long haul routes from Munich has leapt since 2017, the number of long haul airports with direct links to the Bavarian capital has actually fallen.

According to CAPA analysis of OAG data, Munich has 32 long haul destinations in the week of 19-Aug-2019 (in the summer peak period), compared with 38 in the equivalent week of 2017.

The number of routes has dropped in all long haul regions, apart from Asia Pacific, where it has grown from nine to 10.

The increase by one in route numbers from Munich to Asia Pacific between Aug-2017 and Aug-2019 is the result of Lufthansa's launch of a daily Osaka service in Mar-2019. Lufthansa is the sole operator.

Capacity to Asia Pacific has additionally been boosted over the past two years by Lufthansa's entry on two routes.

Lufthansa entered Munich-Singapore in Mar-2018, with a five times weekly service, codesharing with Singapore Airlines, which operates the route daily.

In Jun-2019 Lufthansa entered the Munich-Bangkok Suvarnabhumi route, matching the daily frequency on the route already operated by Thai Airways. According to OAG, Eurowings will assume the Lufthansa operation from the start of the coming winter season.

In addition, Lufthansa has increased its summer frequency to Seoul from six times weekly to daily. 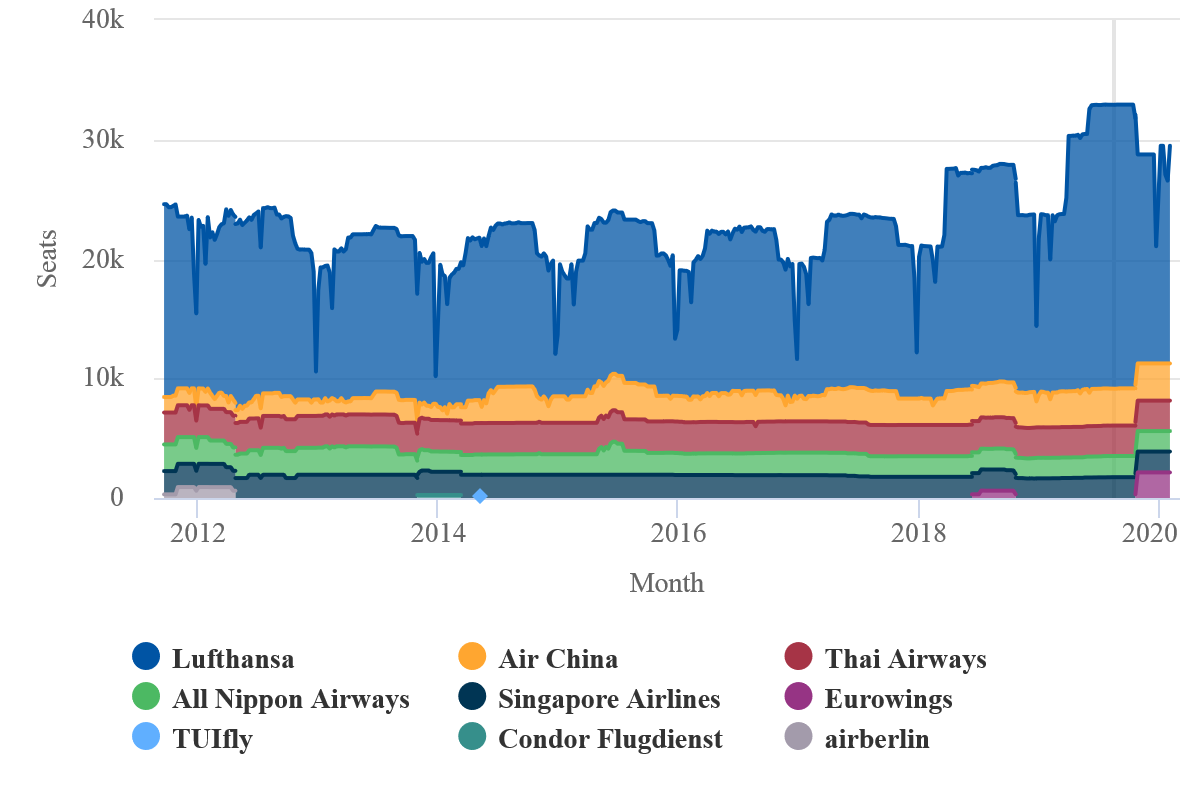 In North America, the net decline in destinations between Aug-2017 and Aug-2019 by three follows the cessation of four routes and the launch of one.

Munich-Halifax was only flown by the sole operator Condor in summer 2016 and summer 2017.

Munich-Las Vegas was flown by Condor in summer 2017 only and by Eurowings in summer 2018 only, and is no longer operated.

Munich-Seattle was briefly operated by Condor between Jun-2017 and Oct-2017 only.

Munich-Philadelphia was operated for many years by American Airlines (and previously, US Air) until Mar-2019, when it ceased.

American Airlines replaced its Philadelphia service with the launch of Munich-Dallas Fort Worth in Jun-2019. It flies the route daily as sole operator.

In spite of the smaller number of routes, seat numbers between Munich and North America have grown over the past two years. This has been driven by American Airlines' Mar-2019 entry into Munich-Charlotte Douglas, matching Lufthansa's daily frequency. 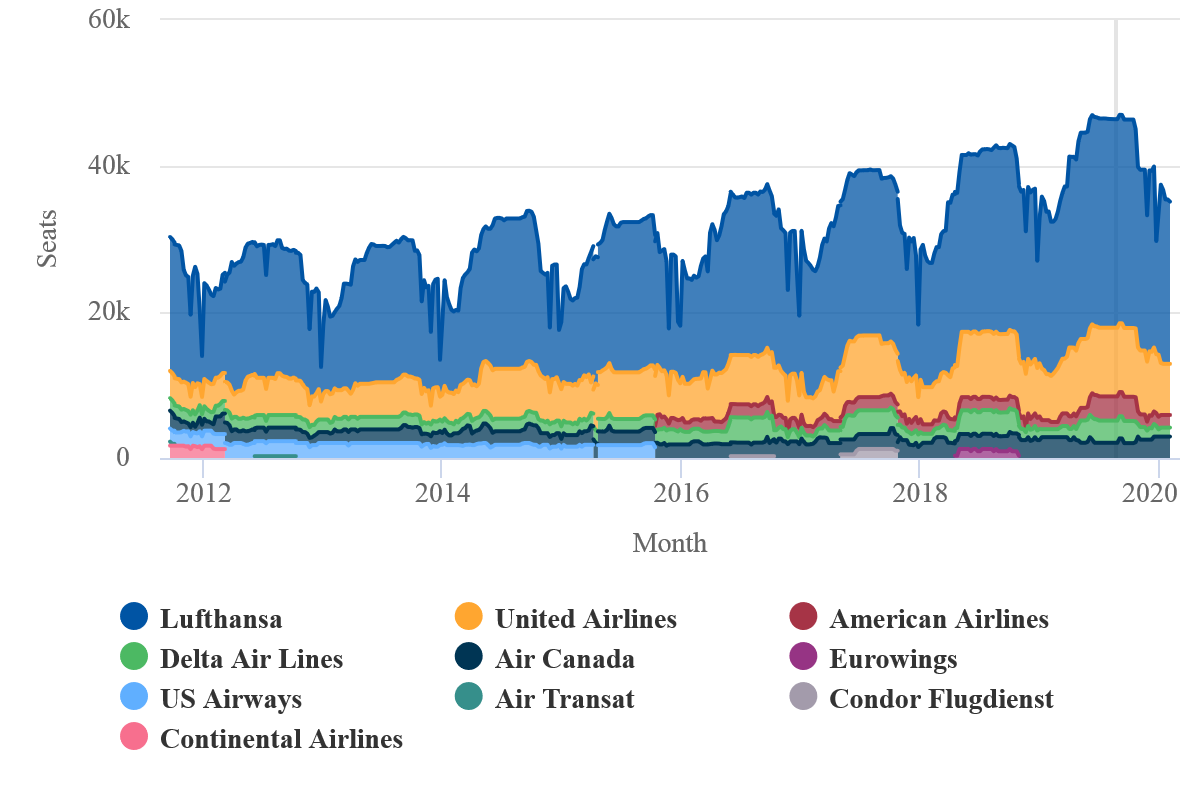 In addition, growth has resulted from Lufthansa's summer 2019 frequency increase on Munich-Chicago from daily to twice daily (its JV partner United also operates the route, with a daily service).

Lufthansa has also upgauged on Munich-Montreal, while maintaining a daily frequency.

The Munich-Latin America market has added one route, but lost four routes over the past two years, for a net reduction of three in mid August.

However, three of the four routes no longer operating this summer will return in the coming winter.

Munich-Cancún and Munich-Punta Cana, previously year-round routes for Condor (and Eurowings from Apr-2018 to Apr-2019), are now winter-only and so, are not operating this summer.

Munich-Havana was also previously a year-round route for Condor, but is now winter-only. Eurowings also operated the route in winter 2018/2019.

Munich-Mauritius was operated by Condor between Jan-2017 and Apr-2018, when it withdrew. Eurowings entered the route before withdrawing in Apr-2019. The route has not been in operation this summer, but Condor will re-enter in winter 2019/2020.

Munich-Holguín was terminated by the sole operator Condor in Apr-2018.

Route numbers between Munich and long haul Africa have fallen from five to a net of four since Aug-2017, following two cessations and one route launch.

Munich-Mombasa was terminated by the sole operator Condor in Apr-2018 after two years of operation.

Munich-Mauritius was operated by Condor in winter only until Jun-2017, when it began a year-round service. However, this was terminated in Apr-2018, when Condor withdrew and Eurowings entered as the sole operator, but then pulled out in Apr-2019. According to OAG, Condor will return to the route in the coming winter season.

Corendon Airlines Europe launched a weekly summer-only service to Banjul Yundum Airport (Gambia) in Apr-2019 and is the sole operator.

Munich has more capacity to major long haul regions than other European airports that have higher total passenger numbers.

Even without that possibility, Munich is a significant long haul hub, giving Lufthansa additional flexibility in its network and welcome bargaining power with its main hub at Frankfurt.