European carrier shares fell with the wider market on Thursday (11-Mar-2010), on concerns China will increase interest rates after a rise in inflation in the country. Investors were also disappointed with economic data from the US, which pushed down Wall Street.

Lufthansa (-1.4%) fell after the group reported a net loss of EUR112 million for the 12 months ended 31-Dec-2009, compared to a profit of EUR542 million in the previous corresponding period. However, the group posted an operating profit of EUR130 million, but this was down 89.8% year-on-year. A breakdown of operating profit/losses are as follows:

The carrier now expects operating profit results to improve this year as the global economy recovers and it moves to further cut costs by EUR1 billion by 2011. However, it added recent acquisitions may continue to weigh on earnings. The carrier forecast sustainable recovery is likely to occur from 2H2010, but declined to forecast whether the Group would be profitable this year.

Vueling load factor not as strong as expected

Air France (+0.6%) was one of few gainers for the day. The carrier confirmed during trading that it filed a complaint with the European Commission against Ryanair at the end of Nov-2009, with respect to the "financial aid it receives from French regional and local airports". Ryanair responded, stating it has not received any such state aid, while Air France had. 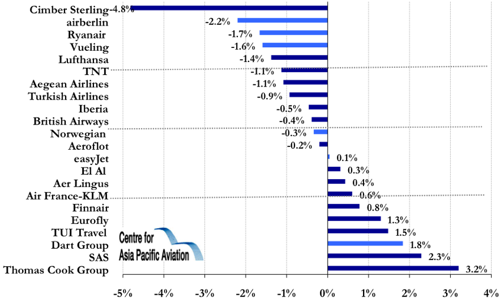