Europe's low cost carriers (LCCs) have consistently increased their presence in the Portuguese international air travel market during the last eight years, from a capacity share of just 2% in Jul-2001 to a peak of 35% in Jul-2008, since when their market share fell back slightly to 33%. This is broadly in line with the growth in LCC capacity market share within Europe in the same period. LCC domestic share trundled along at virtually zero until last year. Since then it has grown very quickly, but from such a small base that even now it counts for only 4.3% of the total. One reason appears to be that Portugal still has nothing to offer in terms of LCCs of its own.

As charts 1 and 2 below demonstrate, the growth of international LCC capacity to and from Portugal and within Europe are virtually identical. Portugal actually had a slightly higher ratio of LCC capacity in 2008 before the downturn set in. Portugal is similar to neighbouring Spain in that most budget airlines’ flights target incoming tourists, to the capital, Lisbon, or to Faro for the Algarve vacation region, or to Porto, a less well developed vacation area to the north and location of the country’s second city. All these airports are operated by the state-owned but to-be-privatised ANA Airports of Portugal. The others are Ponta Delgada (Azores), Santa Maria, Horta and Flores. There are stand-alone airport organisations located in the islands of Madeira (ANAM) and the Azores.

Where Portugal is dissimilar from neighbouring Spain is that traffic is largely concentrated on the airports serving these three regions, whereas Spain has over 40 airports spread over its much larger area. Spain also has a greater degree of traffic directed towards its island airports, especially Palma de Mallorca, which is the country’s third busiest.

Both countries have seen their traffic reduced by the economic downturn, exacerbated by the comparative reliance on tourism and the fact that many LCC leisure-oriented flights originate in the UK where the GBP remains weak against the EUR. In the six months to end Jun-2009 all ANA airports had lost on average 6.1% passengers with a trough of -18.4% in March. The figure at Lisbon (including Jul-09) was -4.8%. The reduction at Faro, essentially a vacation airport, was more severe, at -11.3%, while at the more industrial Porto region it was -3.4% (five months data only). This appears to indicate that traffic to and from airports with greater levels of commercial traffic has held up better.

By comparison the figure for all Spanish airports in the period Jan-Jul-2009 (seven months) was -12.1%. Using this measure, Portugal has been affected half as badly during the recession as its much larger neighbour. More so as the Spanish statistics include the month of Jul-2009, when the traffic reduction was considerably less than it had been in all the preceding months except Apr-09 (Easter). In fact, while Spain lost 5.1% of its passenger traffic in Apr-2009 compared to the previous year, ANA recorded an across-the-board increase of 7.6% in that month, with all the airports except Madeira’s Porto Santo (-18%) and Faro (-1.6%) showing an increase – the vacation airports again losing out.

LCC management will be aware of this trend and it may affect the commencement of new or planned services. Chart 1 suggests it may have done so already. 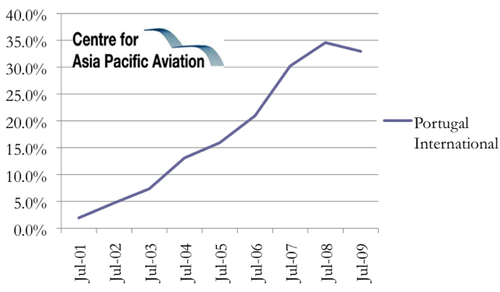 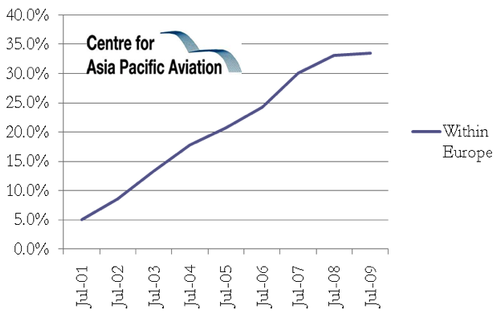 The major European LCCs flying to Portugal include Ryanair (7% capacity share) with 23 routes at its Porto base (Jul-09, the 33rd, and the last before the 20-Aug-209 announcement about Leeds-Bradford airport, its 34th) and 13 at Faro.

Ryanair is not represented at Lisbon, which falls within the airline’s traditional definition of a primary airport (although it is, very much so, at Madrid, with 34 routes). One interesting development is that Ryanair is known to have sounded out the potential for operating from Porto to Cape Verde, the West African island nation that was a Portuguese dependency until the mid-1970s and which has become very popular with European tourists during the last five years.

Should it do so, it would break TAP Air Portugal’s grasp on its ex-Colonial routes, most of which are operated as monopolies or duopolies with the appropriate state airline, although the majority of them in Africa and Brazil are way out of Ryanair’s operating range in its present incarnation. It might also open the way for Ryanair to look more closely at increasing its domestic Portuguese routes, on the mainland and to the islands. So far, it flies only Porto-Faro. 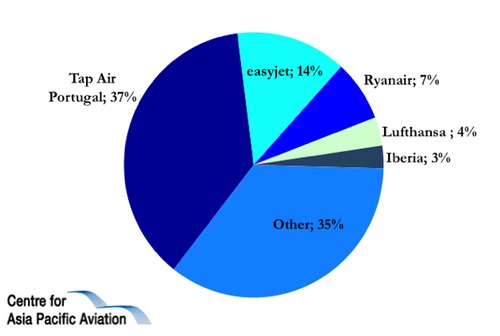 easyJet (14% capacity share) is represented at Lisbon (13 routes, mostly to primary airports in keeping with its clear differentiation from Ryanair), Faro (10 routes) and Porto (five routes).

Another British LCC, bmibaby, has no operations at Porto, but flies to Lisbon (two routes, both primary airports) and Faro (four routes). Jet2.com has three routes to Faro.

Of the mainland European LCCs, Air Berlin has a vast network of 27 routes to and from Porto, and equally large networks from Lisbon and Faro but most of these routes are via its Palma de Mallorca hub rather than point-to-point flights. It also operates to Funchal, Madeira. Spain’s merging Vueling and Clickair are so far limited to services connecting Lisbon with Madrid and Barcelona.

Other LCCs with lesser destinations include Aer Lingus, Germanwings and SkyEurope.

The fact that there is so little penetration by LCCs on domestic routes is partly explained by the lack of Portuguese LCCs, (there aren’t any, just as there are no French LCCs). The sudden increase of almost four percentage points in the share of capacity on domestic services attributed to LCCs (Chart 4) and easyJet’s 4% of the share (Chart 5) are both a result of easyJet’s arrival on the Lisbon-Funchal market, together with Air Berlin’s small number of passengers to Madeira and Ryanair’s Porto-Faro flight. 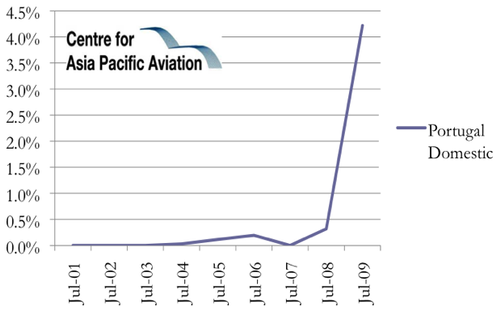 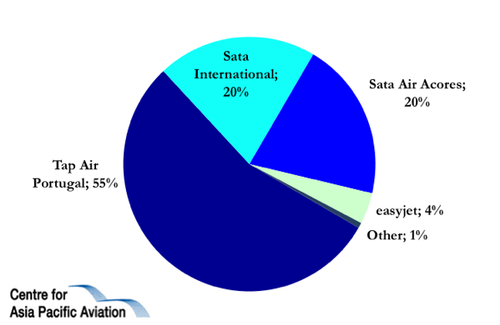 TAP dominates in the domestic sector

Other reasons include the fact that Portugal is a thin and not especially long country with little need for cross-country air travel options, together with TAP’s continuing dominance in the domestic sector, where it has a 55% capacity share compared with its 37% international capacity share. When speaking of TAP, it is important to point out that this includes also Portugalia, the popular regional airline that was taken over by TAP in Nov-2006. Portugalia now operates flights on behalf of TAP under its own brand name and also as PGA Express to secondary Spanish airports.

An unusually robust regional Portuguese airline is SATA Internacional, which is based in Ponta Delgada (Azores). It operates scheduled services to Madeira and mainland Portugal and, together with SATA Air Acores, which operates within the Azores only and manages four airports there, accounts for 40% of the domestic capacity.

Highest fares in the world

SATA has managed to retain this capacity level despite recent allegations that fares for journeys by air to the Azores are not only the highest in Europe, but in the world. However, such is the low level of demand, coupled with the need for a reasonable level of frequency, that LCCs would find it an impossible market to work in – there is not the volume and a once daily flight would be inadequate. Turbo-prop operations (as are carried out in Cape Verde between the islands there by TACV with ATR equipment) are usually best suited to these island regions. The population of the Azores is around 240,000, spread over nine islands, the furthest away of which are actually on the North American plate rather than the European one. The average distance from Lisbon is 930 miles.

The autonomous region of Madeira has a population of a very similar size to that of the Azores, but there is only one inhabited island.

TAP does not try directly to take on the LCCs, preferring to establish and reinforce connections with major commercial cities (it recently commenced services to Moscow and Helsinki) and it has this month announced expansion of its already well-established medium and long hail services to Africa and Latin America, with connections from Europe. Earlier this year TAP cancelled thousands of flights to reduce expenses during the economic downturn but the news emanating from Lisbon in mid Aug-09 indicates that the recession may be drawing to an end in Portugal.

This will raise the hopes of budget airline operators that they could increase international services. There is still room for more, but the dominance of the ‘big two’ of Ryanair and easyJet make entry all the more difficult. As for domestic services, those are probably best left to the local experts.