LCC capacity share in France, Germany, Spain & the UK. Each with their own story to tell

An analysis of low cost carrier penetration into the key European country markets of Germany, France, Spain and the UK reveals two clear trends. Firstly that there is still some rapid growth taking place in the domestic segment, especially right now in France and Spain, and secondly that growth has stalled in the respective international segments for each country. When compared to other global countries, some nations like India have grown their LCCs much more quickly in the domestic segment, while in the international one the four European countries hold up well by this measure.

Germany: Under the influence of Ryanair and Air Berlin

Looking at each country individually and commencing with Germany (Charts 1 and 2). In the international segment, LCC growth came very slowly in early years of this decade as Lufthansa mounted a succession of rearguard actions, particularly against encroachment from Ryanair. LCC services then grew rapidly in 2003, thereafter increasing by 25%-50% each year until 2008, the peak year. So far in 2009, there has been a slight reduction in LCC activity, reflecting the weak economic situation.

In the domestic segment, growth was more steady until 2007 and 2008 (+20% and +18.3% respectively), but tailed off to +6.2% so far in 2009. During the boom years, Air Berlin grew in strength and influence after acquiring both dba (by which it increased domestic share to 25%) and LTU to become Germany’s second largest airline after Lufthansa. But during the last year, its influence has begun to wane after permanently grounding 14 aircraft. But it has now taken over the city flights network of Hapag Lloyd. 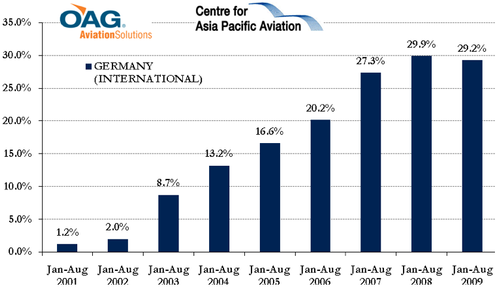 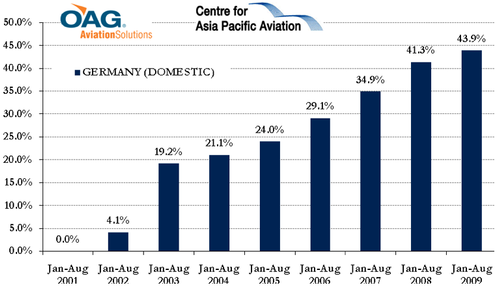 German economy: Germany, the world’s fifth largest economy, recently came officially out of recession, having a banking system that was more resilient to the collapse in financial markets, with typically smaller banks, in greater abundance, and offering a universal range of service. It also was able to benefit from manufacturing remaining a large part of its economy although the prevalence towards exports has proved a disadvantage in the context of weak global demand.

Even though the economy contracted in 2008, GDP growth was the strongest of the four countries analysed here. The Jul-2009 forecast by the IMF (table 1) for -6.2% GDP growth in 2009 appears just now to have been overtaken by events although the possibility remains of a double dip (the so-called W-shaped recovery). The modernisation and integration of the Eastern German economy - where unemployment still exceeds 30% in some municipalities - continues to be a costly long-term process, with annual transfers from west to east amounting to roughly USD80 billion.

The international market share for LCCs in France (Chart 3) is broadly comparable to that of Germany with a 21.7% share in 2009, and also slightly down on the previous year. Growth was quite even in the period 2005-2008, approximately three percentage points each year and down by 0.4 percentage points in 2009.

The main difference between the two countries is that although Germany has one very large LCC and several supporting smaller ones, France has none of its own. The two largest budget airlines operating there are Ryanair, with over 20 cities (though it has been bigger, Ryanair does not like the airport charges structure there) and easyJet with 12, including both the Paris airports. 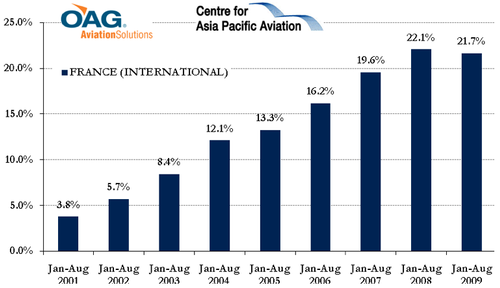 The lack of LCC penetration within France is clear from Chart 4. Even though capacity share has jumped to 8.3% in 2009, (+3.4 ppts), after four static years, that is less than one fifth of the share in Germany. Air France is still dominant on both international and domestic routes. 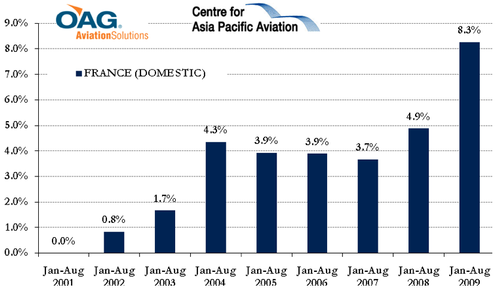 French economy: Like Germany, France has officially ‘exited’ recession, judged by the last financial quarter. GDP growth had dropped to 0.3% in 2008 as evidenced by Table 1. But as with Germany, a reduction of -3% for 2009 may be overstated. The French government plans to increase public investment and continue injecting capital into the banking sector to alleviate the negative effects of the crisis during 2009.

With at least 75 million foreign tourists per year, France is still the most visited country in the world and maintains the third largest income in the world from tourism. That alone is a stimulus towards more LCC flights.

Spanish domestic and international LCC market shares have also risen over the period in question so that the share is now a quarter (domestic) and a half (international) respectively.

Domestic share (Chart 5) increased very rapidly between 2006 and 2007 (five times) and between 2007 and 2008 (two times) then steadied to a 4.6 percentage point gain in 2009. Prior to 2005 there was no budget capacity at all on domestic routes, which were dominated by Iberia and its subsidiaries, as the state generally controls most aspects of aviation to this day. Growth since 2005 has come largely from clickair, the low cost subsidiary of Iberia, and Vueling, the independent LCC. Between them they cover many Spanish airports, providing some competition to the powerful state rail system, RENFE. Vueling and clickair are merging now. 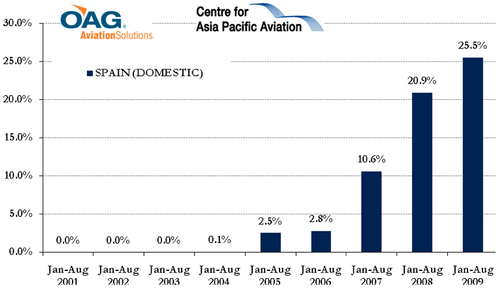 Internationally (Chart 6), growth has been more steady, but the continuous augmentation of LCC share from 5.4% in 2001 to 52.0% in 2008, a factor of 10, in testament to how Spain, the world’s third most visited country with over 48 million annually, has embraced the low cost movement to help it retain that status, whereas France has not.

Apart from the ‘costas’ and their beach resort offerings, LCCs have enabled foreign visitors to access Spain’s rich cultural history in cities the length and breadth of the country, typically on short breaks. This segment of demand has been critical because the Spanish tend not to travel abroad as much as their European counterparts, although they do travel extensively, internally.

The leading Spanish LCCs again have been Vueling and clickair, while the ever-increasing popularity of the costas means they are well-served by a panoply of LCCs from across Europe, with numerous bases and focus cities. Air Berlin even established a hub on the island of Majorca. 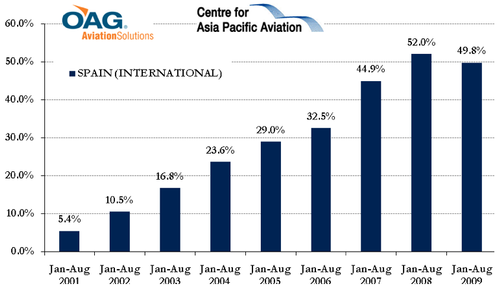 Spanish economy: Spain’s economy is one of the worst of the four countries under review. It grew every year from 1994 to 2008 before, overly reliant on construction and tourism, it entered a recession that started in 3Q2008. The economy was greatly affected, especially after Prime Minister Zapatero's second term began in Apr-2008, by the bursting of the housing bubble and construction boom that had fuelled much of the economic growth between 2001 and 2007. The global financial crisis exacerbated the economic downturn. GDP growth in 2008 was 1.2% (Table 1), well below the 3% or higher growth the country enjoyed from 1997 through 2007 and there is little to suggest in this case that the IMF forecast for 2009 (-4.0%) and 2010 (-0.8%) is inaccurate.

At least the Spanish banking system is considered solid, thanks in part to conservative oversight by the European Central Bank, and government intervention to rescue banks on the scale seen elsewhere in Europe in 2008 was not necessary. But the unemployment rate, especially noticeable in the tourism business, is close to 20% and international visitors to Spain are down on average by 10% in 2009 to date.

UK: LCC capacity has flattened out

Finally, to the UK (Charts 7 and 8). The UK is where the low cost movement outside the US started, in 1994, and developed by airlines like Ryanair and easyJet and more recently by clones or individually styled ones like bmibaby, Flybe, Jet2.com and Monarch Scheduled.

Having shot up after September-11, growth in both the domestic and international segments has been both slow and predictable for the last five years and actually fell back in 2009 (international) and 2008-09 (domestic). 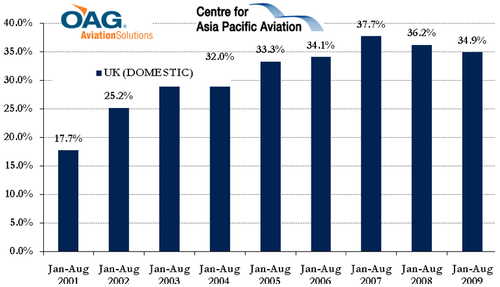 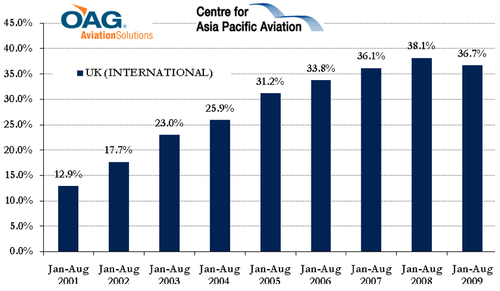 Nor is the UK LCC share as high as some people think. Both the German domestic and Spanish international segments have higher LCC capacity shares. The other peculiarity of British LCCs is that they are hardly present at all at the principal London airport, Heathrow. They most certainly are at Paris CDG and Madrid, though not so much at Frankfurt International. In the UK they are based and operate out of London Stansted and just about every other commercial airport in the country and the 65.1% legacy airline share in the domestic segment is mainly down to the trunk services operated out of Heathrow by British Airways and bmi to the key cities where rail travel is only, or less, comparable (Manchester, Glasgow, Edinburgh) or impractical (Belfast).

There is little scope for LCCs on the short cross -ountry air routes, many of which are operated by regional airlines with turbo-prop equipment, except where there is a ‘big city’ level of demand propped up by VFR travel (e.g. Belfast – Manchester, Birmingham, East Midlands and Cardiff).

UK economy: The heavily-indebted (GBP800 billion) UK economy was the first to follow the US into recession and will probably be the last to follow it out. But there are some signs that the economy is slowly turning so the IMF forecast for 2009 and 2010 looks to be accurate. At the same time the economy is still sensitive to knocks, such as the recent negative report by the Bank of England that caused the GBP to fall below EUR1, which has an immediate knock-on effect on leisure travel to mainland Europe. 2010 and 2011 will be testing times as the government begins to recover the billions of pounds it pumped into the banking sector to save it from complete collapse (which included the full or partial nationalisation of half a dozen banks) and will be manifested in the form of income tax rises of up to three pence in the pound (GBP0.03 in the GBP1).

On top of that, natural gas and oil supplies are beginning to dry up and the UK became a net importer of energy in 2005 for the first time in three decades and at the mercy of foreign governments and corporations.

With no manufacturing sector left to speak of, recovery will once again be left in the hands of banks whose powers will be scaled back. In short, costs will increase dramatically for all inhabitants and that fact will impact on travel choices with the LCCs probably hit hardest.

In conclusion, how do these LCC capacity shares compare on a global scale? Well, as Chart 9 spells out, over the period 2001-05-09, all the four European countries have fallen behind some others in the domestic segment, notably in Asia, where the LCC ‘phenomenon’ took longer to gather pace, but which are not only sustaining growth but actually doubling or tripling it in the period 2005-09.

But a word of caution. India especially is a country where growth may have been too far, too fast, as we will find out when the economy there returns to normal. The same may be true of Mexico and South Africa. 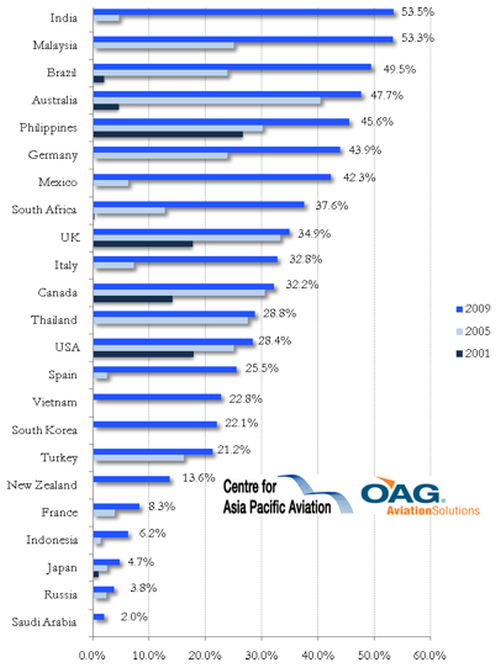 Chart 10 indicates that the four countries hold up well overall in the international segment compared with global counterparts and in some cases continue to grow solidly, notably Spain and Germany.

France lags behind in both segments and one is tempted to conclude that if the LCCs cannot ‘take off’ by now they probably never will, while Air France-KLM retains its iron grip. 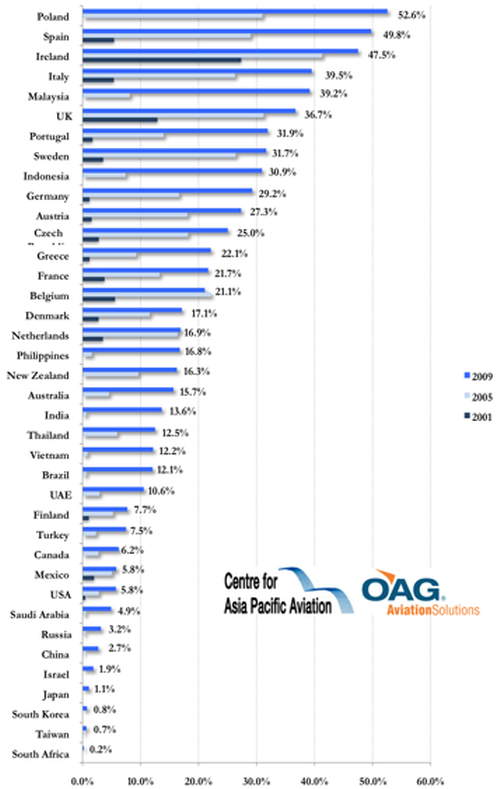