Although financially weaker than their competitors to the south, US carriers continue to dominate Latin America’s international market. As a result, US airlines are well positioned to exploit the anticipated growth in the region. Complacency, however, is not an option. US carriers should seriously consider making strategic investments in Latin America’s leading airline groups to ensure their place in this important emerging market.

Latin America is a natural playground for US carriers given the geographic proximity and economic ties between the two regions. US carriers have traditionally accounted for a large majority of capacity between the US and Latin America. This has always been a sore topic for Latin American airlines, who over the years have repeatedly complained about an uneven playing field and how difficult it is to compete against their larger and aggressive competitors to the north.

Over the past decade, Latin America’s leading carriers have emerged as some of the most profitable in the world, as their US competitors have incurred big losses and been battered by multiple bankruptcies. Latin American carriers are now stronger competitors on international routes to North America and Europe. But foreign carriers still dominate the non-regional international market.

Excluding intra-Latin America flights, foreign carriers now control about seven out of 10 international seats to and from Latin America. Five of these seven are controlled by North American carriers. 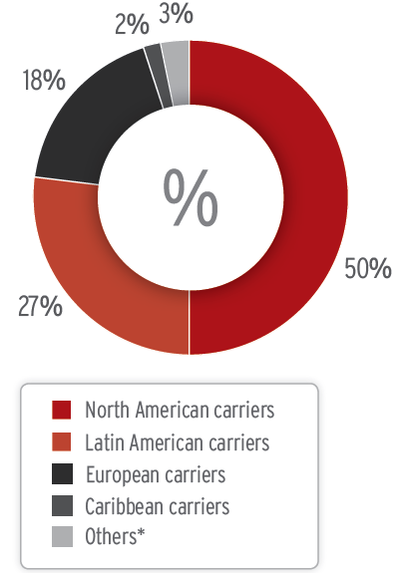 Source: CAPA – Centre for Aviation & Innovata
Notes: *Others include carriers from Asia, Australia, Africa and Middle East.
North American figure includes 46% for US carriers and 4% for Canadian carriers.
The chart is based on total capacity (seats per week ) to and from
Latin America (Mexico, Central America and South America). 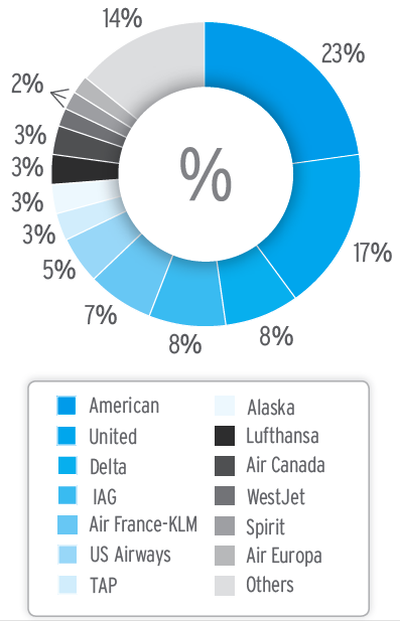 American is now the largest carrier in several key US-Latin American markets, including Argentina, Brazil, Mexico and Venezuela. Overall, US carriers account now for 66% of total capacity in the US-Brazil market, 67% in the US-Venezuela market and 76% in the US-Argentina maket (see background information).

By far the biggest Latin American market from the US is Mexico. The collapse of Mexicana last year, then the largest Mexican carrier in the US with about 18% of the US-Mexico market, led to a widening in the gap between US and Mexican airlines.

US carriers swooped in and quickly absorbed about half of the roughly 300,000 passengers per month that were transported by Mexicana on its US routes. Mexican carriers, led by Aeromexico and Volaris, have also added trans-border capacity this year and increased their market shares to the US – but from relatively low bases.

Current schedule data shows Mexican carriers again account for more than 25% of total capacity. But it is unlikely they will be able to capture even one-third of this important market in the foreseeable future.

Delta, the third largest US carrier in Latin America but much smaller than American or the newly combined United-Continental, could look to duplicate its investment strategy in other Latin American markets. It is by far the most aggressive international player among US majors, having added more international capacity in recent years than its rivals and made an ultimately unsuccessful attempt to buy a stake in Japan Airlines in 2009.

Gol could be Delta’s next target. Like Aeromexico, Delta already has an MRO partnership with Gol as well as a codeshare. Investing in Gol would be strategically important at it could help Delta in its bid to woo Gol, which is currently un-aligned, into SkyTeam.

American and United should take note. US carriers have largely missed out on investing in the world’s biggest growth market, Asia. Latin America could be their last chance to diversify and directly play in a market which undeniably has more growth opportunities than the mature North American market.

It is unlikely US carriers will acquire large stakes or pursue mergers with Latin American carriers. Airline ownership restrictions remain onerous and even where they have the cash, US carriers still lack the will to support buying sprees. But even small stakes such as the Aeromexico-Delta tie-up are strategic, provide a seat on the board and go a long way in cementing ties between carriers.

In the 1980s and 1990s, ownership ties between US and Latin carriers were common. But Delta’s investment in Aeromexico marks the first time a major US carrier has invested in Latin America since 2008, when Continental sold its remaining stake in Panama’s Copa.

Continental initially purchased a 49% stake in Copa in 1998 for USD53 million and gradually sold off its shares for profits. Copa today has a market cap of almost USD3 billion.

Copa and Continental have remained very strong partners, with Copa even using OnePass, which is now in the process of being merged into Mileage Plus, as its frequent flyer programme. United should now consider re-establishing the equity tie-up with Copa and also look at South American carriers. Copa already plans to join United-Continental in the Star Alliance next year.

Besides Aeromexico-Delta, the only other current example of North American carriers investing in their Latin American counterparts is in the regional sector. Utah-based SkyWest acquired a 20% stake in Brazil’s TRIP in 2008, while Canada’s Jazz last year purchased a 25% stake in Uruguay’s Pluna. Two airlines that do not even serve South America can clearly see the opportunities a growth market provides. For major US carriers that already operate their own aircraft in the region and have large market shares to defend, the opportunity is even more obvious.

If US carriers don’t respond, European carriers probably will. South American routes support some of their most profitable operations and interest is natural.

Air France-KLM and Lufthansa could also be enticed to make an investment in Latin America to diversify their European portfolios. The recent profitability of airlines in Latin America is clearly an attractive proposition for any airline group in a mature market.

As they do to the US market, Latin American carriers have relatively small market shares on European routes. This is particularly true on Brazil-Europe routes, which is by far the largest Latin America-Europe market.

The Latin America-Asia Pacific market is also dominated by foreign carriers. Aeromexico is the only Latin American airline serving the Asian continent, with routes to Tokyo and Shanghai (Aerolineas and LAN both serve New Zealand and Australia). However, a half dozen Asian carriers now serve South America. Middle East carriers in particular are expected to add capacity to the region over the next few years, opening up routes and city pairs Latin American carriers will never be able to operate viably.

With so much growth within Latin America, the region’s carriers are generally not interested in significantly investing in long-haul expansion.
Tie-ups, through alliances and codeshares, will remain the preferred route for building up networks outside the region – an attractive feature for alliance partners.

It is logical for US carriers particularly to look towards Latin America as they shed their insular roots and ponder investments in foreign carriers. It is also logical for Latin American carriers to look northward as the region’s international market remains US-dominated with a relatively small amount of international capacity to Europe compared to North America. Equity tie-ups and (if US ownership regulations are relaxed) mergers will likely follow alliance lines. 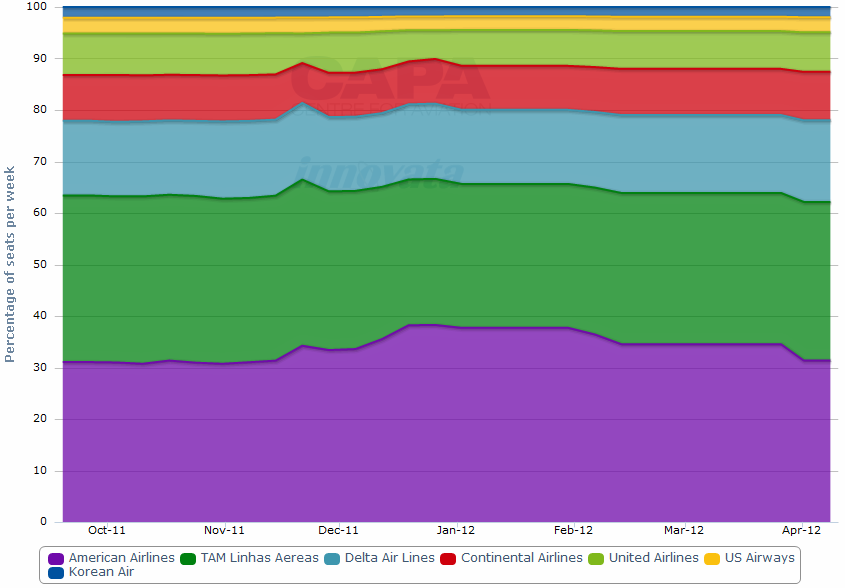 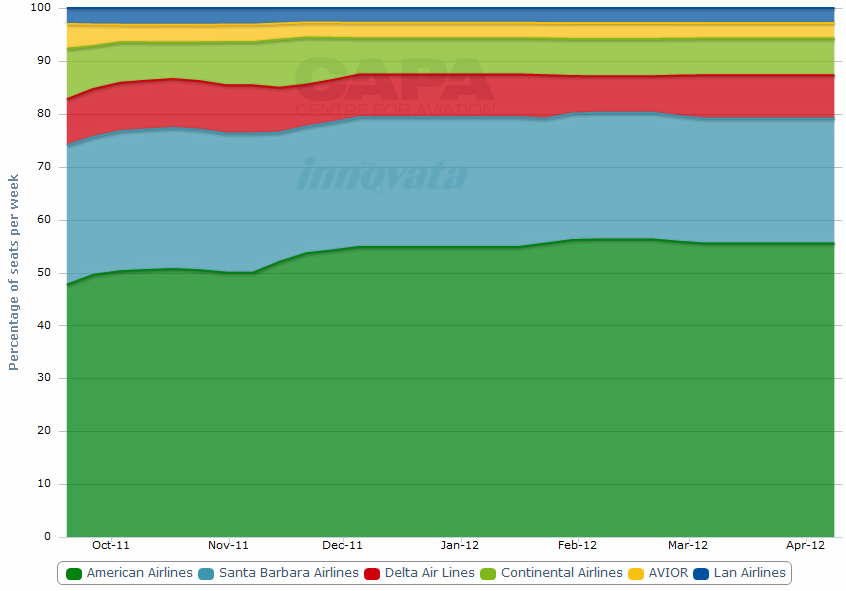 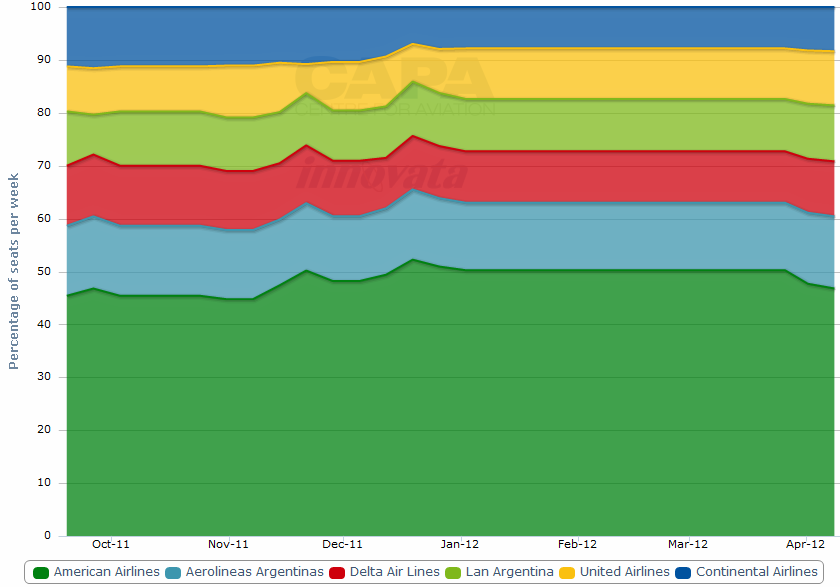 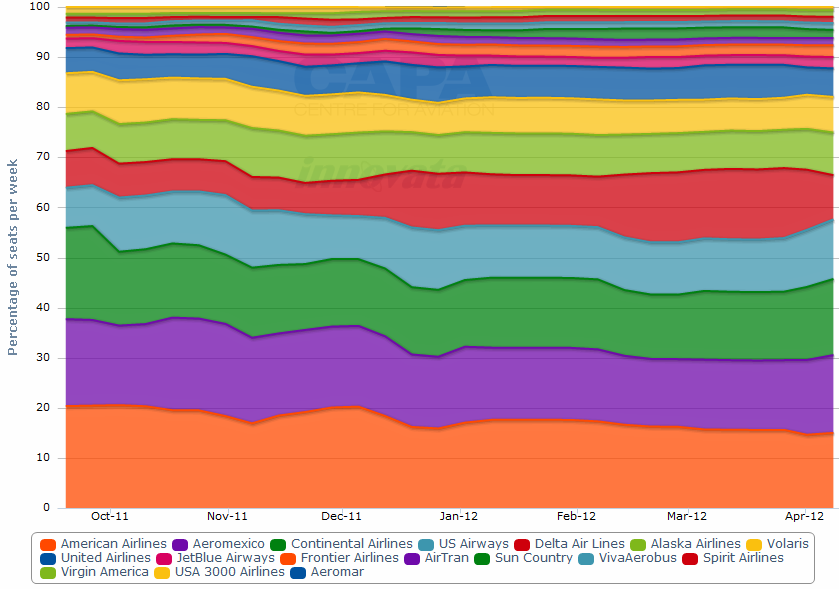