Jetstar Japan has secured its position as the largest of the low-cost carriers that launched in Japan in 2012. But this size has come at a price. Jetstar Japan perhaps under-estimated the limitations posed by its home base Tokyo Narita's curfew.

While Jetstar Japan's punctuality has been in line with global averages, Japanese legacy carriers have created expectations in the market with extraordinarily high on-time performance and low cancellation rates. While that makes ANA and JAL super reliable, it also inflates their cost base. But the market, in an all too typical tale, has demanded the the same reliability but with the lower fares. Another growing pain was issues over safety procedures, leading it to voluntarily put a hold on growth.

But now Jetstar Japan has adjusted to its market and is looking forward, as CEO Miyuki Suzuki told CAPA's recent LCCs and New Age Airlines Summit in Seoul. An Osaka Kansai base and international operations have been put on hold. Jetstar Japan has been handed a considerable opportunity by the situation at AirAsia Japan, also based at Narita. AirAsia Japan will suspend operations in Nov-2013 and re-launch in Dec-2013 as Vanilla Air, bringing to ANA not just a new name but new strategy as Vanilla, like half-sister Peach Aviation, places more emphasis on international flights than on domestic. That leaves the new LCC domestic market to Jetstar Japan. Its next competitor, Skymark, will be distracted in 2014 as it takes A330s and A380s, moving away from being an LCC to more of a hybrid operation.

Jetstar Japan has been aggressive, taking about one aircraft a month, and keeping its capacity entirely in the domestic market. In FY2012, ending 31-Mar-2013, Jetstar Japan carried fewer domestic passengers than Peach. But, adjusting for its later launch, its size becomes apparent. Jetstar Japan even registers as one of the nine largest carriers, foreign or domestic, serving Japan. Peach and AirAsia Japan do not make the ranking. 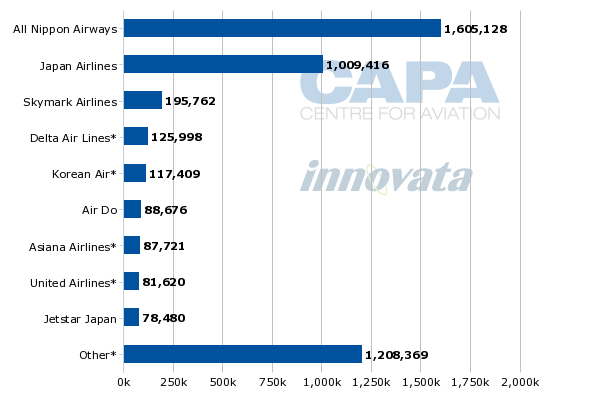 Ms Suzuki calls Jetstar Japan the fastest growing airline in Japanese history. Ms Suzuki told the conference Jetstar Japan has sold over half a million tickets for less than JPY5000 (USD50.10). As of Sep-2013 it operates 14 aircraft, all A320s.

Jetstar Japan differs from AirAsia Japan and Peach, amongst other areas, by only flying in the domestic market. This benefits its two main shareholders: JAL and Australia's Qantas Group, which owns the Jetstar Group. JAL wants to strengthen its position in the domestic market while Jetstar can benefit from domestic feed. Various Jetstar affiliates serve Japan from assorted points in Australia, the Philippines, Singapore (soon to end) and Taiwan.

Domestic yields declined after the LCCs launched. A decline was to be expected as the LCCs mainly launched in the popular summer season, with the slow season immediately afterwards. But the rate of decline was higher than incumbents experienced. Yields rebounded for Jetstar Japan and Peach in 1Q2013 (01-Apr-2013 to 30-Jun-2013) according to data they supplied to MLIT.

The yields exclude revenue from ancillary services, such as checked luggage. But it seems considerable ground remains to be gained compared to launch yields. Peach's 1Q2013 yields were lower than a year prior despite heavy discounting in the start-up phase. 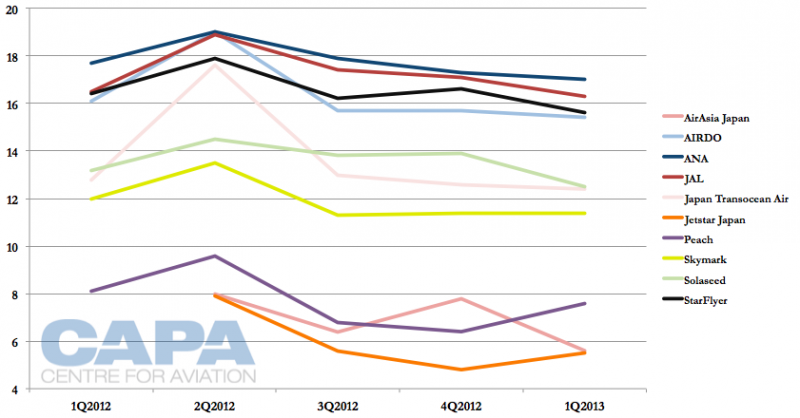 Jetstar Japan has seen lower brand recognition than Peach. This is despite Jetstar serving Japan from Australia since 2007. By the time of Jetstar Japan's launch, the Jetstar Group had carried two million Japanese passengers to Australia. Jetstar Japan was beset with trouble early on as it under-estimated the limitations of the curfew at its Narita base and the sensitivity of the public to punctuality. This was worsened by a media spotlight in the initial few months that saw reports on almost any sort of delay or cancellation.

Ms Suzuki acknowledges Jetstar Japan's operational performance was not initially strong, but over summer 2013 on-time rates were above 90% and cancellation rates below 1% – in line with ANA and JAL and above global expectations. 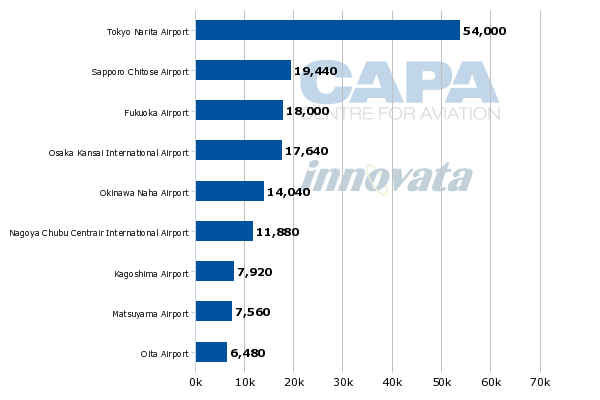 One specific market Jetstar Japan is targeting is resort destinations, especially those known for their onsen facilities. JAL was pleased to see Jetstar Japan enter markets on the country's fourth largest island, Shikoku. 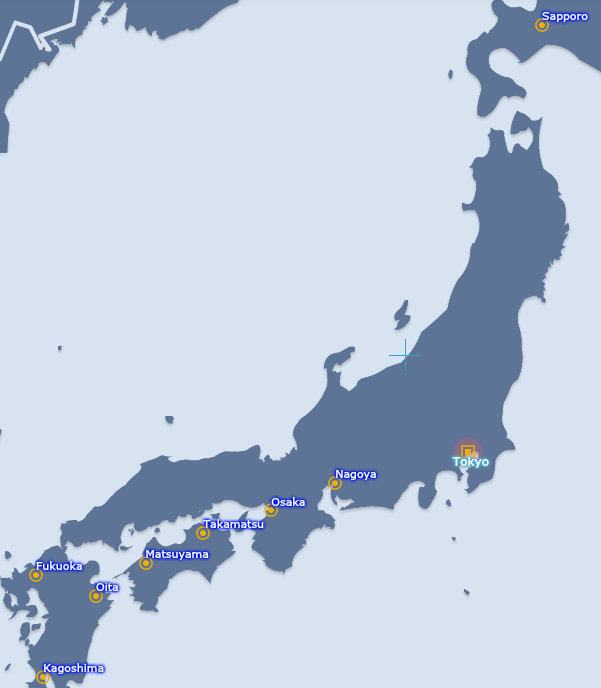 JAL rival ANA has a stronghold on destinations on the island, consistent with ANA having a larger domestic footprint in Japan than JAL. 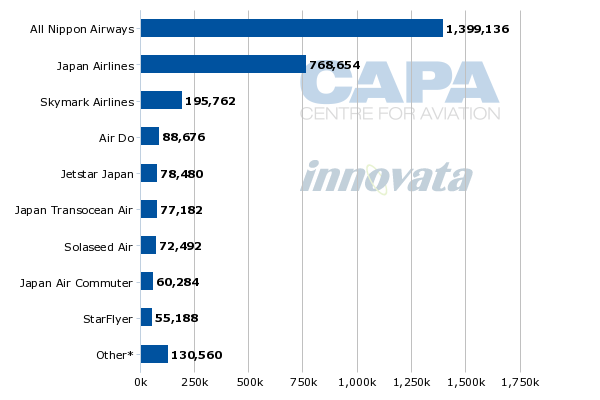 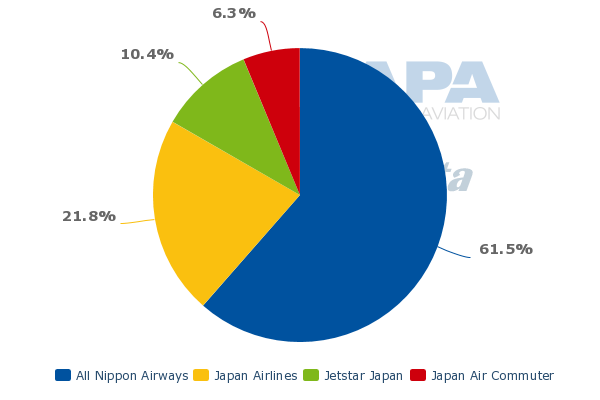 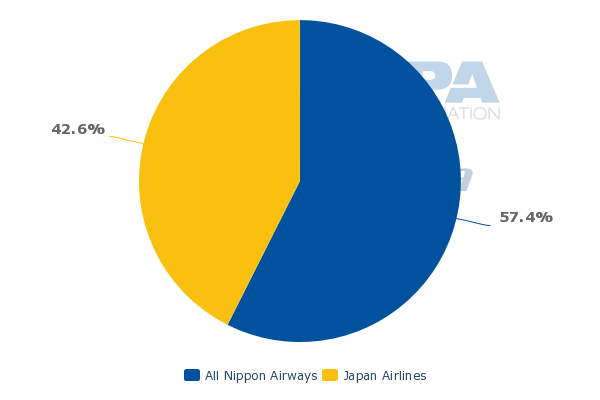 Jetstar Japan had planned to launch international services in the first half of 2013, but this has now been pushed back until summer 2014 at the earliest. This delay was partially caused by Jetstar Japan putting a hold on its growth in response to not complying with its internal procedures.

Broadly the carrier plans to link Tokyo Narita and Osaka Kansai with points in mainland China and Korea. Chinese destinations will depend on relations between Japan and China, as a territorial dispute flared in Sep-2012, causing rapid decreases in traffic. While traffic has rebounded, there is still some way to go. Another flare-up could see 2014 pushed off the cards.

Approximately 40% of Peach's ASKs are in international markets while the figure is 45% for AirAsia Japan. Both will likely see the international share increase. 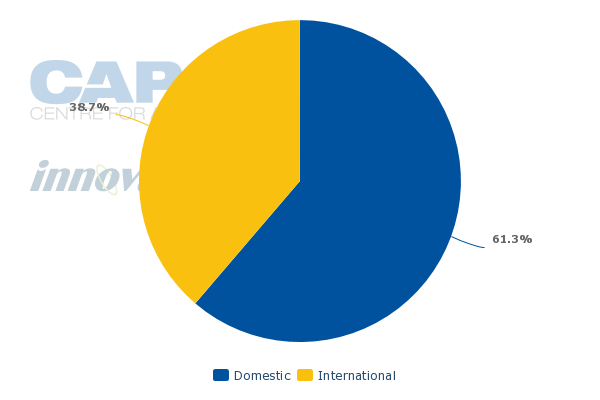 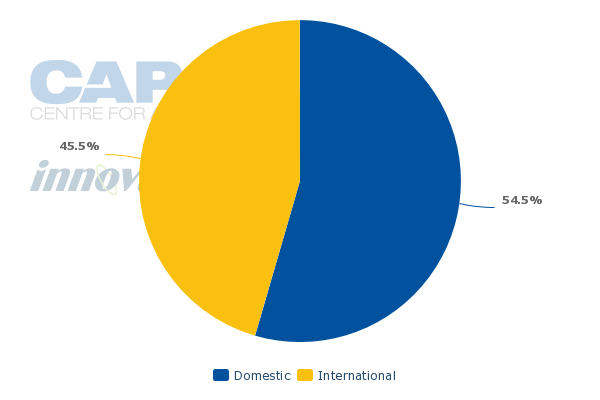 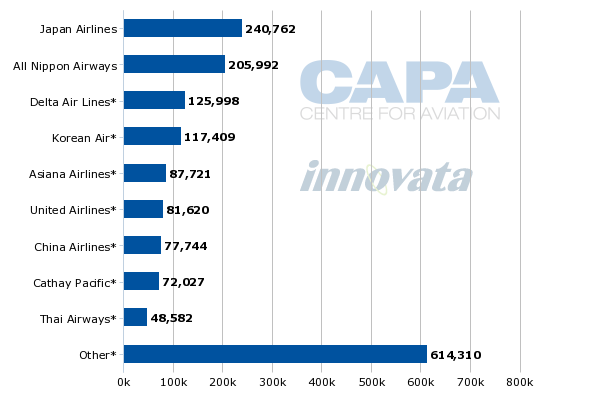 Jetstar Japan intended to open a base at Osaka Kansai but this was postponed. Jetstar in 2012 failed to follow its own internal procedures, which were more strict than Japanese regulations, regarding maintenance matters and, rather than face a reprimand and limitations by the Japanese regulator, Jetstar Japan limited its growth to ensure it had a strong operational base. In Japan where the public is easily disturbed by safety concerns, this was a setback.

But Jetstar Japan still intends to open a base at Kansai. The airport is open 24 hours and will allow Jetstar Japan to make some much-appreciated boosts to its utilisation rate. Jetstar Japan in Sep-2013 has seven daily flights: three to Okinawa (Naha), two to Tokyo Narita, and one each to Fukuoka and Sapporo.

A deeper entry into Kansai will see Jetstar Japan take on Peach, which will enter the Osaka Kansai-Tokyo Narita market in Oct-2013.

Jetstar Japan has been rewarded by its willingness to adapt to market nuances. This contrasts to AirAsia Japan, where part-owner ANA found that AirAsia wanted a universal model rather than pursue Japan-specific strategies that could benefit the carrier. Ms Suzuki openly welcomes non-direct distribution, noting that 20% of the carrier's tickets are sold indirectly. That figure will rise to 25% in the short term.

A significant step was Jetstar Japan's deal to sell tickets via Japan's omnipresent Lawson chain of convenience stores. Credit cards are not widely used in Japan, especially in the key demographics Jetstar Japan is targeting: the elderly and students. Convenience stores however accept alternative method payments, including cash. While this distribution method comes at a cost, Ms Suzuki says tickets sold through Lawson have a yield 15-20% higher than tickets sold on Jetstar Japan's website or through its call centre.

The carrier also has over 30 partnerships with travel agents. This helps Jetstar Japan smooth out its booking curve, as many tickets are still sold close to departure, providing some uncertainty to the carrier.

Additional distribution partners are planned, and Jetstar Japan also intends to build its interline relationships, currently limited to JAL and Qantas. Jetstar Japan also codeshares with JAL, but only on international itineraries. Another revenue boost is delivered in the form of JAL frequent flyers being able to redeem miles for travel on Jetstar Japan. While business passengers may earn miles when flying on JAL, which operates out of convenient Tokyo Haneda Airport, when it comes to taking their family on holiday, Jetstar Japan offers greater value.

Jetstar Japan's benefit extends beyond aviation. Together with its LCC peers, it is changing Japanese tourism – and by extension the economy. Narita hotels that once struggled to fill rooms are now frequently booked, bus companies are adding transport options to Narita, and individuals are flying more and pursuing trips that without LCCs would have been prohibitively expensive. While the focus is on leisure traffic, Ms Suzuki says she has met one woman who has flown Jetstar Japan 23 times for business.

Narita Airport is also changing. The terminal building is now open during the night and has a 24 hour convenience store. To accommodate passengers who arrive the previous night for 0600 flights, Narita has added benches for them to sleep on and removed arm rests on the benches so people can sleep flat. Ms Suzuki says such passengers even have their own nickname: the "airport tribe".

But this is also testament to the considerable change Japan is still to undergo if it is to support and reap the benefits of LCCs. Narita especially has challenges with public transport options that are affordable and available for early morning flights.

Japan has already seen the benefits of its new LCCs at a top level: in FY2012 for the first time in six years, the domestic market grew. While there would have been growth without the LCCs, they accounted for about 42% of the additional passengers in FY2012 compared to FY2011. This is a fundamental re-structuring of aviation, and it does not come easily. And by extension, nor do profits. All three LCCs were in the red in their first year, which is to be expected for a start-up. AirAsia Japan fared particularly worse and, seeing little prospect of improvement AirAsia pulled out, while Peach had respectable performance and projects it will post a profit in FY2013. Jetstar Japan has not released financial details.

See related report: Japan's LCCs' financial and performance results in: how did they fare in their first year?

Part-owner Qantas is no stranger to pain in the short term or even having that stretch over a few years, as occurred in Vietnam with Jetstar Pacific. Jetstar Japan had hiccups in its early months but is moving past those. The Qantas group commitment here is for the long term. For Japan, the history of LCCs is still in its infancy, and with more change to come, the potential upside remains very large.