The introduction of three low-cost carriers to Japan in 2012 – Peach, Jetstar Japan and AirAsia Japan – may still be fragile with Jetstar Japan curtailing growth and AirAsia Japan losing its founding partner, but the three are showing meaningful improvements to the Japanese economy. In the 12 months to 31-Mar-2013, their passenger traffic has given the Japanese domestic air market, the world's third largest, a needed bump by helping it grow for the first time since 2006.

But the situation is still dire. 2012 was only the third year of growth since 2002, and passenger numbers in 2012 are the same as they were in 1997. No other major market in the world – and high-growth Asia especially – has seen such abysmal performance. International traffic fared only slightly better, with 2012 traffic around only 1999 levels. And despite innovation and new best practices, load factors in the domestic market are at the same low 60% figure of two decades ago. Incumbents have signalled they must change. LCCs may force it.

Japan is the world's third largest domestic market, a title it may lose to Brazil in the short term and in the medium term may be taken over by a combination of Indonesia, Brazil and India. Looking at ASKs, Brazil is just slightly behind Japan.

Japan has the unenviable distinction of being the only major market in the world to have about the same traffic today as 15 years ago. Some domestic markets – South Korea, Taiwan and some European countries – have seen domestic passenger numbers decrease but in all those cases international traffic has ballooned. The position of such a stagnant market in Asia is a sharp juxtaposition to the growth elsewhere in the region where some airlines are held back only by the number of aircraft they can obtain. The trends in aviation underscore the larger issue Japan's economy is facing. 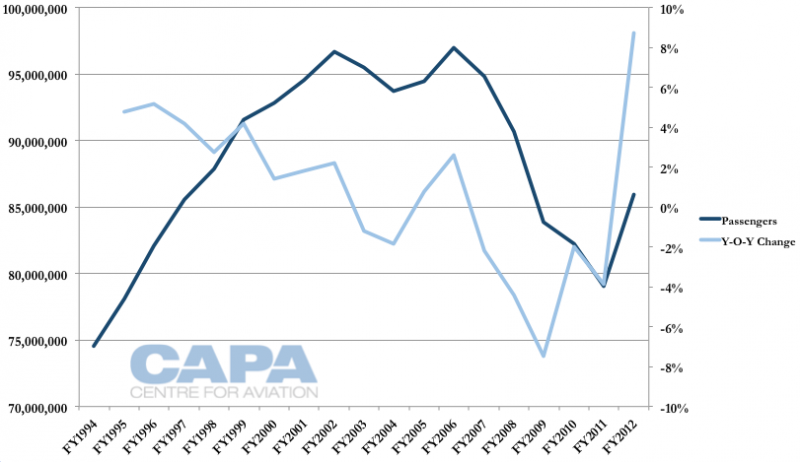 The domestic market in FY2012 is about the same as in FY1997, creating a 15 year period of lost growth. The domestic market stopped its growth streak in FY2003, which commenced 01-Apr-2003, right at the start of the US-Iraq War that increased fuel prices, depressed travel demand and created economic uncertainty.

While the market in FY2006 was back to FY2002 levels, the global economic crisis stunted demand while Japan Airlines' spectacular bankruptcy filing (see graph below) and the Mar-2011 earthquake and tsunami resulted in significant cuts in FY2010. 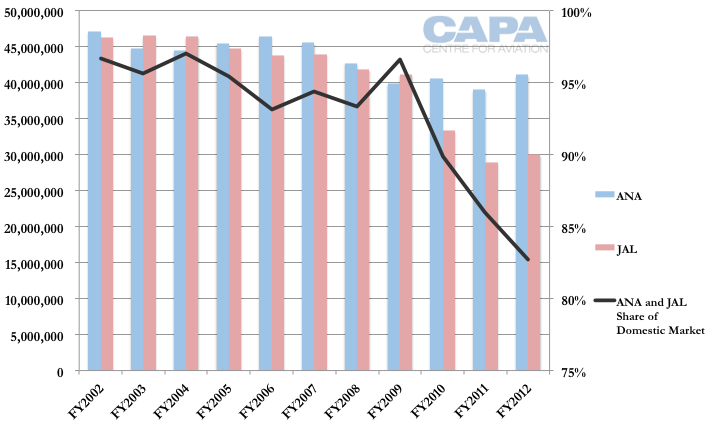 LCCs may still be ramping up, but they are delivering passenger numbers

Introducing LCCs was never going to be easy in conformist Japan long accustomed to the ANA-JAL duopoly and their pampering. AirAsia Japan has paid a price while even Jetstar Japan has had to slow down growth. So while AirAsia Japan and Jetstar Japan are not as bullish as they once were (Peach has been consistently conservative, and doing well) and profits are yet to come, the LCCs are delivering passenger numbers. Peach, which launched first, carried 1.2 million passengers in FY2012 while Jetstar Japan carried 1 million and AirAsia Japan a weak 300,000. 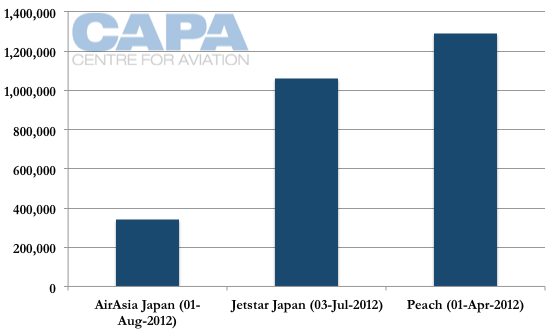 LCCs accounted for half of growth

53% of the passenger growth in Japan in FY2012 was supplied by low-cost carriers: the three new entrants (AirAsia Japan, Jetstar Japan and Peach) as well as Skymark and Solaseed. But it was mainly the three new LCCs that drove growth, accounting for 42% of FY2012 growth in the domestic market. Peach and Jetstar Japan contributed the most growth, 20% and 17% respectively. Jetstar Japan's achievement is particularly notable considering it launched only on 03-Jul-2012 whereas Peach launched in FY2011, so FY2012 takes into account a full year of Peach operations but only about three-quarters of a year of Jetstar Japan operations. Peach has a more international focus whereas Jetstar Japan remains entirely domestic, also helping explain Jetstar Japan's disproportionate growth contribution. The higher growth rate of LCCs than full-service carriers mirrors the trend in Europe of LCCs growing more than their full-service counterparts. 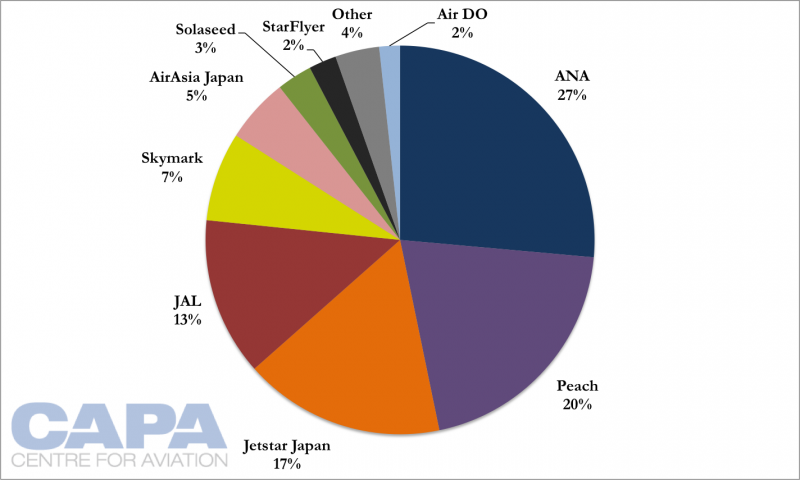 The weakest is clearly AirAsia Japan, which launched less than a month after Jetstar Japan on 01-Aug-2012 but only contributed 5% of growth. AirAsia Japan has embarked on international services, although not to the extent of Peach. The main drivers for its lower contribution to growth is its slower aircraft induction and weaker demand as passengers found difficulty booking and paying for AirAsia Japan flights even though its network and fares largely mirror Jetstar Japan. So it is unsurprising AirAsia Japan reached a crisis point and AirAsia pulled out, leaving the operation to ANA.

Efficiency has not improved: load factors still in the mid-60s

While external events and larger macroeconomic trends have impacted demand, Japanese carriers have stunted demand due to their high cost base. In CAPA's recent ranking of Asian airline costs, the three most expensive airlines were from Japan: StarFlyer, All Nippon Airways and Japan Airlines. 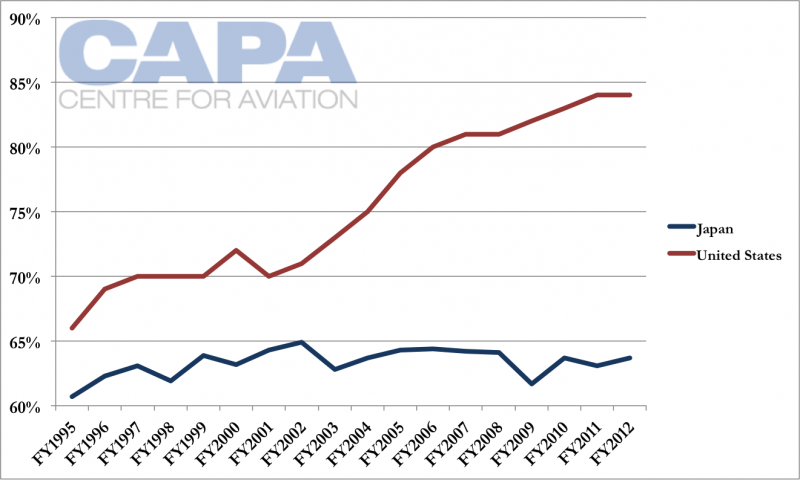 Japan's international market is fairing better, but not by much. The market grew almost 10% in FY2012, a level not seen since FY1999. But this growth came after contraction in the latter half of the previous decade, prompted by economic downturns as well as the Mar-2011 earthquake. Passenger volumes in FY2012 were about that of FY2000. Growth in FY2012 came from Peach's international operations (Seoul Incheon, Taipei Taoyuan and Hong Kong) as well as the increasing number of long-haul flights from ANA and JAL, particularly to North America.

See related report: Despite new air routes, traffic between Japan and the US is down from last decade 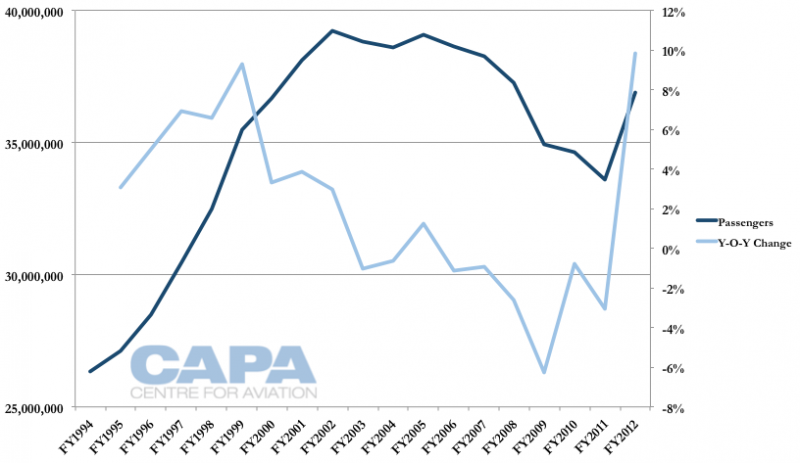 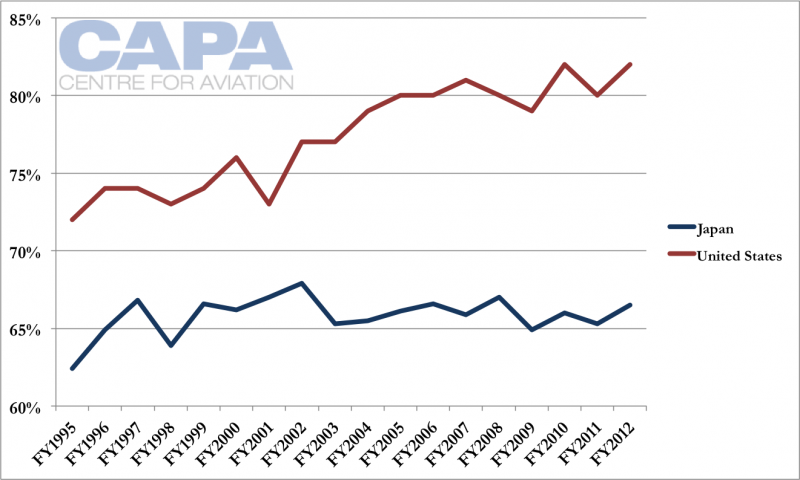 LCCs will have role in bringing Japan back

Shareholders may be waiting for their new Japanese LCCs to make a profit, but the airlines are already positively impacting Japan. The contribution is not just in greater volumes of passengers whose travelling has a trickle-down effect across the economy, it is also in giving Japan's legacy carriers an incentive to become more efficient. The cost dynamics of a full-service carrier with a 60% load factor competing with a LCC with an 80% load factor are vastly different to a full-service carrier with an 80% load factor taking on an efficient LCC. The LCCs are also showing Japanese carriers a new way of doing business with less bureaucracy and a more lean structure. With greater acceptance from the public, the LCCs will continue to grow, increasing their contribution to Japan. LCCs continue to breakdown barriers.