Japan's LCCs' financial and performance results in: how did they fare in their first year?

Japan's Peach Aviation has reported an operating loss of JPY900 million (USD10.8 million) in FY2012, its first full year of operations. At a negative 6.3% margin, this is a not unacceptable performance from such a young start-up. Peach intends to have a significant improvement in FY2013 by posting an unspecified profit. This is far better performance than AirAsia Japan, which recorded about USD33 million of losses. Jetstar Japan has not released financial results.

Peach's CASK, according to CAPA calculations, stands at USD10 cents – 31% lower than ANA but 29% higher than Skymark, although increasing scale and diminished start-up costs will see CASK reduce. A very approximate CASK calculation for AirAsia Japan suggests its CASK is higher at USD11.6 cents, which combined with lower yields and load factors underscores its difficulties that culminated with AirAsia pulling out. Peach has been the highest yielding of Japan's new LCCs, although understandably well below ANA and JAL. Of the LCCs, Peach has shown strong performance in on time and cancellation rates, critical in punctuality-minded Japan. Its utilisation rate is also the highest.

ANA during 1QFY2013 results said Peach is now forecasting an undisclosed profit for FY2013, ending 31-Mar-2014. In FY2012 Peach incurred operating revenue of approximately JPY14,300 million (USD172.3 million) and an operating loss of JPY900 million (USD10.8 million) giving it a negative 6.3% margin – a very reasonable performance in its first year. Its net loss was JPY1200 million (USD14.5 million), the carrier confirms to CAPA. Quarterly figures were not disclosed. This performance is ahead of Peach's business plan, which anticipated being profitable within three years.

Jetstar Japan has not released financial details but losses are clearly expected. The Qantas Group said start-up losses for the 12 months to 30-Jun-2013 for Jetstar Hong Kong and Jetstar Japan were AUD50 million (USD49 million). The majority of that is likely with Jetstar Japan, which Qantas owns 33.3%. 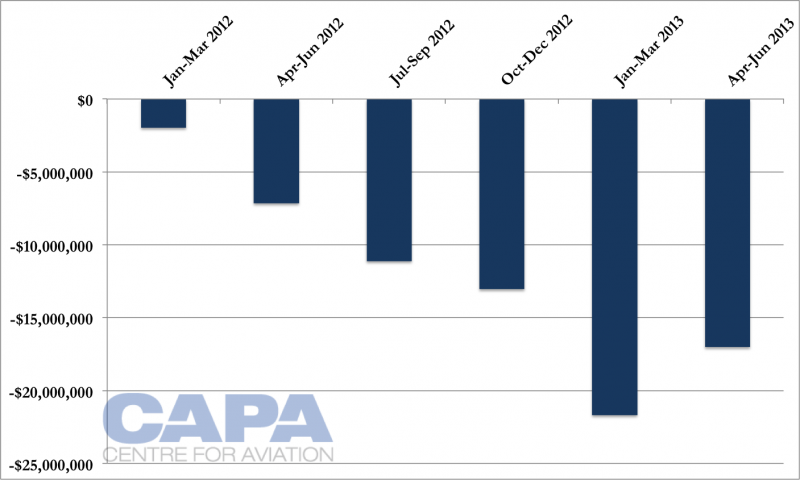 AirAsia Japan's performance was significantly worse than at Peach. AirAsia Japan in its operational quarters accumulated three times the losses of Peach despite AirAsia Japan flying one-third the ASKs Peach did in FY2012. 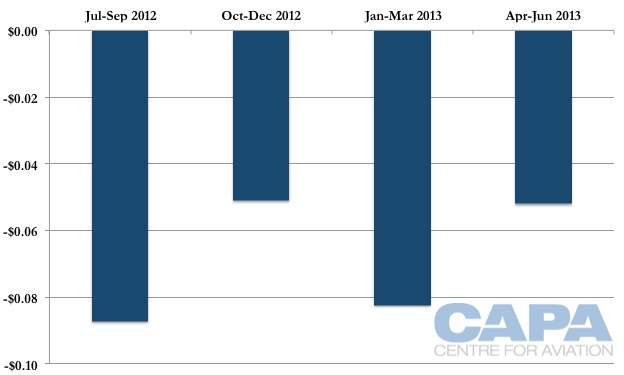 Using capacity figures from OAG, we can estimate Peach to have CASK of USD10.0 cents and AirAsia Japan's CASK to be approximately USD11.6 cents.

These figures are heavily skewed, given that the carriers incurred start-up costs from new routes and operated with a sub-ideal amount of aircraft that did not permit great opportunities to achieve scale. Nonetheless, Peach's CASK comes in about 29% below ANA with a slight difference in average stage length. (The longer the stage length, generally the more efficient the carrier given the more efficient nature of long-haul flights as fixed costs can be distributed over a longer distance.) 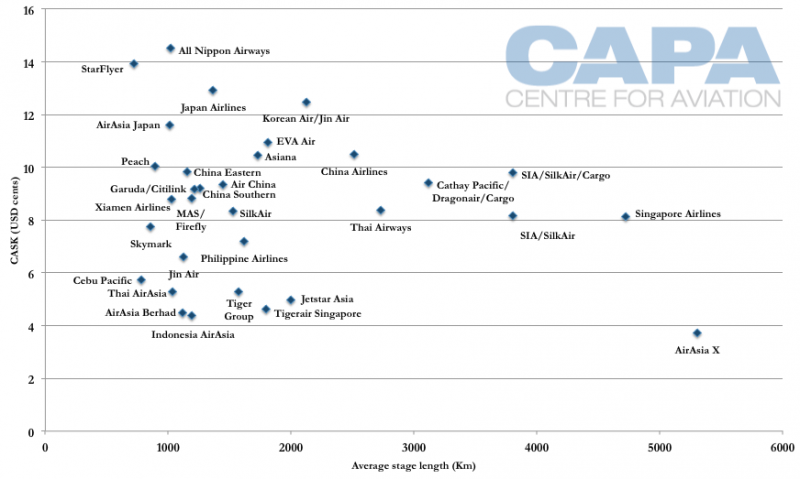 Peach's CASK is about the same as China Eastern, whose average stage length is notably longer than Peach. But with the CASK of long-haul carriers skewed by the efficient nature of their long-haul operation, comparing CASKs between Peach and long-haul carriers on similar routes would yield a considerably higher advantage for Peach than the average CASK suggests. Peach's CASK should further fall as it gains scale and moves past its expensive start-up phase, but ground will need to be gained: Peach and Skymark have almost identical stage lengths but Peach in FY2012 had an average CASK 29% more expensive than Skymark. Peach ended FY2012 with seven A320s whereas Skymark ended the year with 29 737-800s.

With an estimated CASK of USD11.6 cents, AirAsia Japan had an operating cost about 16% higher than Peach, but Peach's cost is higher than ideal due to some inefficiencies and not fully adopting LCC tactics, making AirAsia Japan's performance even worse. Once AirAsia Japan amassed scale it was expected to have a lower operating cost than Peach. Although AirAsia Japan's CASK is once again skewed due to lack of scale, it would have been exceptionally challenging for it to achieve the JPY6 CASK that ANA projected AirAsia Japan to achieve in FY2013 or FY2014 (at the time of ANA's projection of this CASK, JPY6 was equivalent to approximately USD7.2 cents).

AirAsia Japan ended FY2012 with four A320s (one of which was delivered at the end of Mar-2013, the last month of the 2012 fiscal year). Start-up costs would have been high given its immediate move into foreign ports, Korea's Busan and Seoul (services to Taipei did not commence until FY2013), but there have also clearly been issues with achieving a low-cost base independent of scale and start-up costs.

The relative similarity in CASK but large gap in profitability between Peach and AirAsia Japan can be explained by yield and load factor. Peach had the highest yields of the three new LCCs, but its strong performance tapered in 4QFY2012. Peach ended FY2012 with an average yield of JPY7.5 while AirAsia Japan recorded an average yield of JPY7.4 and Jetstar Japan JPY5.8. As to be expected, these yields were significantly lower than incumbent airlines. The next lowest average yield was held by Skymark at JPY12.1. The new LCCs had yields less than half of heavyweights ANA and JAL.

On paper Skymark has an enviable position as it has a yield advantage over the new LCCs but lower CASK. Skymark has however warned that on city-pairs it overlaps with the new LCCs its performance is weakening. Higher yields elsewhere on Skymark's network are offsetting lower yields where it competes with the LCCs. 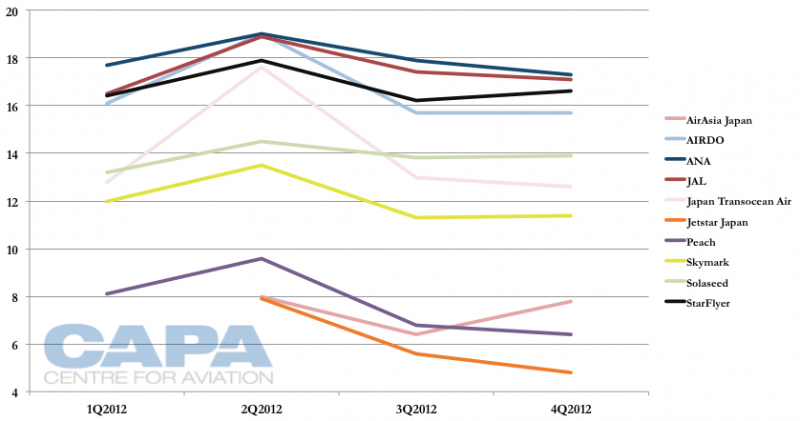 Load factors softened as 2012 wore on and the peak summer season, when they launched and when passengers booked heavily to try the LCCs, faded away. Load factors at ANA, JAL and Jetstar Japan started to climb in Mar-2013 with school holidays and spring vacation, with Apr-2013 and May-2013 performance high due to Golden Week holidays. 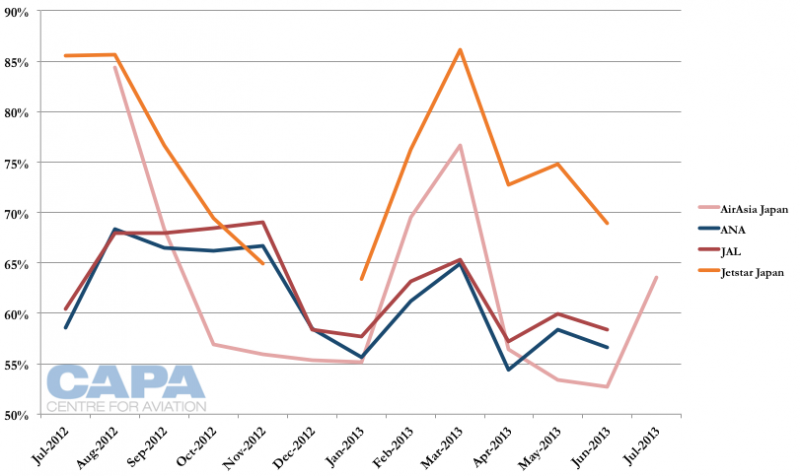 Source: CAPA - Centre for Aviation and airline reports
Note: Data incomplete. AirAsia Japan load factor is for system performance whereas other carriers are for domestic only

AirAsia Japan struggled to fill seats due to a number of reasons including limited distribution and a reputation for being late and cancelling flights – a reputation that is not unfounded. Only 64% of domestic AirAsia Japan flights departed within 15 minutes of scheduled departure time. This compares to 80% at Jetstar Japan and 81% at Peach. 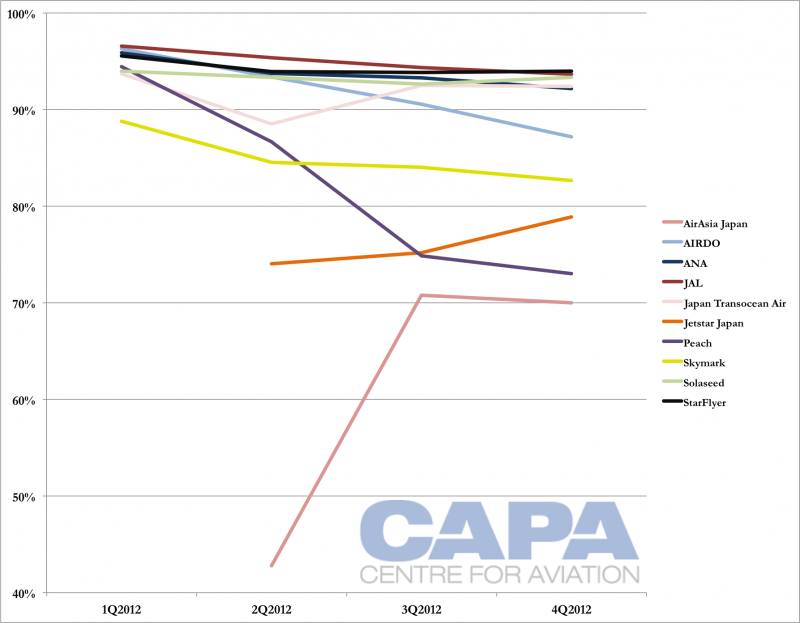 Yet AirAsia Japan still developed a reputation early on for cancelling flights. AirAsia Japan miscalculated its operations early on, with cancellation rates the highest at the start of its operation: 3.8% in Aug-2012 and 3.6% in Sep-2012.

The timing of this was particularly bad - while the spotlight was on them, the public was eager to know how the country's three new LCCs were performing; even a single cancelled flight became a regular media topic; at the time of AirAsia Japan's launch it was nearly four times as likely to cancel a flight as JAL. AirAsia Japan quickly brought its performance in line with 1.5% and 1.9% cancellation rates in 3QFY2012 and 4QFY2012 respectively, but the reputation had been established. Jetstar Japan's performance meanwhile deteriorated, with the carrier in 4QFY2012 having a higher cancellation rate than AirAsia Japan during its worst moment. Delays during this period were also subject to media coverage.

Peach's performance stands out. Its domestic cancellation rate has consistently improved and in 4QFY2012 has the second-lowest cancellation rate of reporting carriers. An advantage for Peach over AirAsia Japan and Jetstar Japan is that its home base, Osaka Kansai airport, is a 24-hour airport whereas Tokyo Narita airport, the base for AirAsia Japan and Jetstar Japan, has a curfew, resulting in cancellations if a flight misses the curfew. 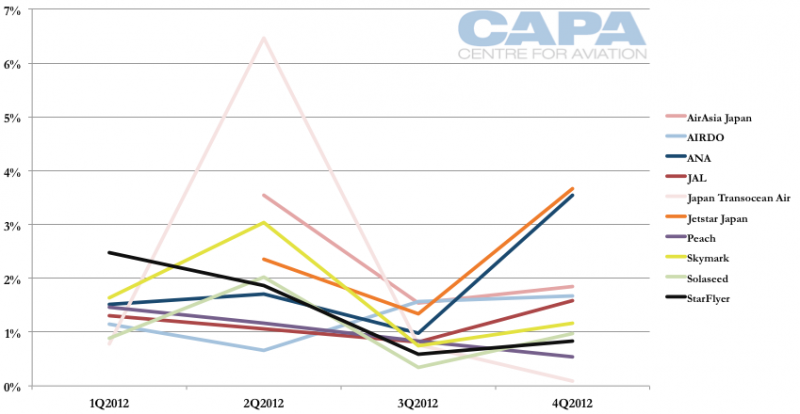 The LCCs have not disclosed utilisation rates, but using CAPA's Fleet Database and OAG we can estimate utilisation rates for the week of 26-Aug-2013. Although this time period is not in FY2012, it gives a more useful indication of utilisation rates as the carriers have now amassed their greatest scale yet. 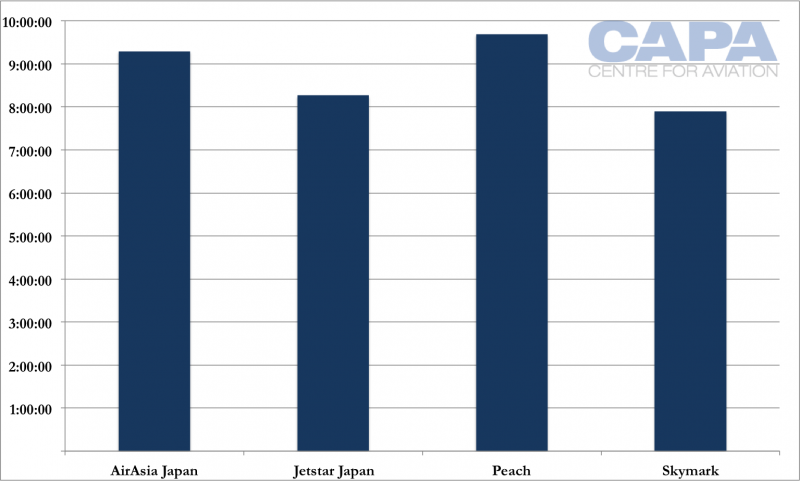 Peach is the clear leader with an utilisation rate of approximately 9h42m. AirAsia Japan is not far behind at 9h18m. Jetstar Japan is distinctly lower at 8h16m while Skymark is at 7h54m. As mentioned, Peach benefits from operating at a curfew-free airport. But Skymark is also based at a curfew-free airport, Tokyo Haneda, but with a lower utilisation rate.

While there are differences in management approaches to scheduling, Peach also benefits from operating overnight services to/from Hong Kong. Back-of-the-clock operations are expected to grow at Peach as the carrier looks to launch services from Okinawa to Southeast Asia, which could be scheduled overnight. Peach has stated it planned to operate midnight-hour services to Chinese cities where daytime slots are all but gone; these services were postponed due to decreased China-Japan traffic as a result of a territorial dispute.

Profitability will demonstrate the ability to grow market, and doing so sustainably

The figures once again affirm Peach as the most successful of the three 2012 LCC start-ups. Its yields, utilisation and on-time performance are the highest while cancellations are the lowest. Peach has demonstrated it was savvy about local operations, having the best initial on-time and cancellation rates and since then, maintaining the momentum. It has been advantaged by its curfew-free base as well as having been operational for all of FY2012, allowing greater scale and for blips to be averaged out whereas initial low performance from AirAsia Japan and Jetstar Japan cannot be averaged out as much.

Yet these figures are not set in stone. Peach's yields are trending south and in 4QFY2012 were lower than AirAsia Japan. Its on-time performance has also dropped 10ppt. More time is needed for AirAsia Japan and Jetstar Japan to gain scale, although AirAsia Japan will take longer as it re-builds its operation under the Vanilla Air branding.

Skymark is holding its ground well, but yields on common routes with LCCs are a concern, as well as its cost base being encroached as Peach grows its utilisation with overnight flights, which Jetstar Japan and later Vanilla Air, the post-AirAsia Japan subsidiary of ANA, are also expected to do.

The bottom line from a public policy perspective is however the very important one that the new LCCs helped grow domestic traffic for the first time in six years. Tourism and consumers alike are the beneficiaries. There are clear signs too that the benefits of efficiency-consciousness are starting to spread through Japan's aviation and transport system.

With a positive earnings result looming from Peach, the LCCs look to be on their way to fuelling a growth renaissance - profitably.

Unless otherwise noted, exchange rates were calculated based on the year's average rate.