The story of low-cost carriers in Japan follows not just the classic script of the youthful carrier taking on legacy incumbents. It also borrows from the Indian and Latin American experience of LCCs providing an alternative to long bus rides. And in a situation unique to Japan, LCCs provide an inexpensive alternative to pricey high-speed trains.

It is this broad context that explains Peach Aviation's entry into the Tokyo-Osaka market, which connects Japan's best-known cities but is not the country's largest domestic air route. Peach and Jetstar Japan will offer 3,780 weekly one-way seats, a drop in the bucket to the over 111,000 offered by airline competitors on this 405km route. But airline incumbents are not the sole target: one-way fares on the shinkansen cost about USD140 while an overnight bus, sometimes without bathrooms, could be USD32-100 depending on availability. So a one-way fare from USD42 on Peach or Jetstar Japan represents a seismic change. Competing with the shinkansen, the LCCs do require a trip out to Narita, but the fare is a third of the price. Competing with buses, the LCCs may be cheaper or about the same but with comfort and a shorter journey time. The story of LCCs in Japan is young and they are still finding traction, but their impacts are indisputable and will steadily grow.

Tokyo-Osaka is viewed as something of a flagship route as it links Japan's two best-known cities (and largest, depending on definition) but the air route is only the third largest city pair. The largest is the link from Tokyo to Sapporo, in Hokkaido island in northern Japan where the shinkansen does not reach. Second largest is from Tokyo to Fukuoka, much further south than Osaka and so longer to reach on the shinkansen. Osaka's shorter distance to Tokyo makes the shinkansen very competitive.

But Tokyo-Osaka is still a significant route in the world, indeed it is the fourth largest as of Jul-2013. Tokyo-Sapporo is first in the world while Seoul-Jeju is second and Tokyo-Fukuoka third.

The city pair is dominated by All Nippon Airways and Japan Airlines while Skymark is in a very distant third place. 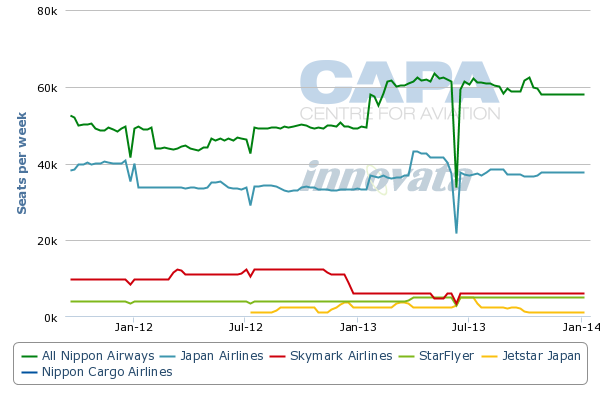 Peach from 27-Oct-2013 will offer double daily service between Tokyo and Osaka with its 180-seat A320s. Jetstar Japan has served the Tokyo-Osaka market since its Jul-2012 launch, initially with a daily flight and then increasing to its present double daily capacity. AirAsia Japan, the third LCC to launch in Japan in 2012, never entered the Tokyo-Osaka market, but had been looking at it strongly.

While Peach is entering a route already served by LCCs, its entry is of note, given its higher capacity year-round as well as Peach finding greater traction in the market than Jetstar Japan. 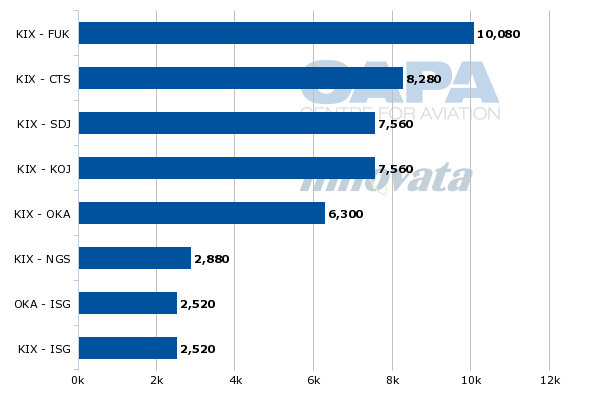 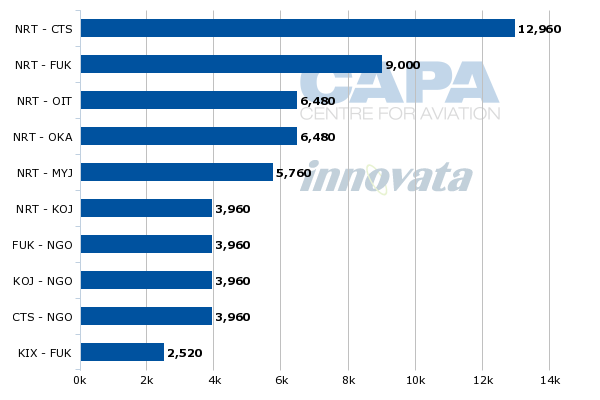 With limited frequency and far-flung airports, ANA and JAL are not the main competitors

The competitive impact to ANA and JAL will be small, a fact that will not be lost on the head offices of each, as their respective subsidiaries expand. The two mainly operate between Tokyo and Osaka from the more convenient and downtown Tokyo Haneda and Osaka Itami airports whereas Peach and Jetstar Japan are, for now, confined to farther-flung Tokyo Narita and Osaka Kansai.

Independent Skymark, whose significantly lower cost base than ANA and JAL translates to lower fares, operates from Haneda to Kobe, west of Osaka. ANA alone has over 20 flights a day from Haneda to Itami, most on widebody aircraft.

Peach will have a stronger frequency advantage than Jetstar Japan, but both are the underdogs to ANA and JAL. Combined with their service to/from less convenient airports, business travellers will be a minority of passengers. But as is typical of LCCs, if business markets are targeted, this occurs later. Peach and Jetstar Japan are however valuable alternatives for leisure passengers and those looking for lower fares willing to trade convenience for price: Peach and Jetstar Japan have three-month advance purchase one-way Kansai-Narita fares from around USD42; ANA's is USD92. But travel in Japan is often arranged last minute, partially because yield management had been nearly non-existent. Closer to departure, ANA and JAL's fares increase more than on LCCs (although this is partially due to the LCCs still gaining awareness – and passengers).

Peach and Jetstar Japan (and AirAsia Japan in other markets) are following the well-trodden path of using their lower fares to stimulate travel. When ANA or JAL were largely the only travel options, travel was a limited occasion due to prohibitive costs. Peach has even offered same-day shopping trips from Osaka to Seoul – which prior to its entry in that market would have been seen as too luxurious an activity to undertake. Anecdotally, AirAsia Japan has found school sports teams travelling to other cities to participate in a match for the day. It is these new types of travel the LCCs generate that can help sustain flights, rather than poaching ANA and JAL's passengers (but some passengers will naturally follow the lowest fare, and this has already occurred).

Ground competitors: shinkansen is expensive while buses long and not always cheap

Another sustaining passenger source are those taking the shinkansen and buses. The shinkanen's efficiency is notorious: departures leave every few minutes at peak hour and the trains have almost near perfect on time performance. But this efficiency comes with cost, and the one-way shinkansen fare is JPY14,050 (USD141), and that is a recently reduced fare as the operator takes note of greater airline competition. There is negligible revenue management on this corridor (some trains elsewhere in the country have started to experiment with advance-purchase fares since the entry of LCCs), so booked in advance airlines are cheaper but perhaps not as fast once door-to-door times are included.

Tickets on ANA and JAL a few days out from departure can rival or exceed the shinkansen fare; in Jul-2013 some last minute purchases on ANA are at least JPY13,670 (USD137) one-way, again on a route of only 405km. While business travellers often see flying as the way of life and, perhaps, a source of some prestige, the shinkansen can be easier and less stressful for leisure passengers compared to the small cost saving of flying. And, with a remarkable 250 each way services daily on the route, the train is a very convenient option. But bringing in LCCs with substantially lower fares begins to change the calculation. What would cost three passengers to fly on a LCC is the cost of one on the shinkansen.

LCCs are targeting shinkansen passengers looking to trade down (depending on perception), and are also targeting highly price sensitive bus passengers looking to trade up. It may seem odd that in Japan, perceived as super-efficient and perhaps even futuristic, there could be a notable long-distance bus transport sector, but this is the result of expensive flights (pre-LCC era) and trains. Bus fares from Tokyo to Osaka vary widely. Some operators have started offering advance purchase discounts. A JPY5,500 (USD55) one-way bus fare from Tokyo to Osaka might be as low as JPY3,900 (USD39) if booked in advance and travelling on a weekday.

Other operators have flat-rate fares: JPY10,000 (USD100) for a standard seat or JPY10,800 (USD108) for a more spacious seat. Other routes in Japan have seat offerings that rival that of airlines, ranging from 2-2 to 1-1-1 to even suite-like seats that have a fixed wall behind them to create privacy. The journey  by road from Osaka to Tokyo is long, at eight hours or more overnight, and some buses do not have toilets, although they do make stops. The LCCs will have a strong cost advantage over buses, and will either be cheaper or offer far greater convenience for little additional cost.

Outlook: Change comes slowly in Japan, but the LCCs are turning the wheels

Much is stacked in favour of the LCCs: travel for a fraction of the cost or similar cost but with greater value. This is apparent on the Tokyo-Osaka route. No doubt that with time additional frequencies will be added, making the LCCs more convenient even if they never rival ANA or JAL. But the short term poses challenges. Change is slow in Japan, especially when its potential ramifications are so seismic. And there will be nuances; Peach and to a lesser extent Jetstar Japan have been careful to cater to the Japanese market while AirAsia Japan overlooked some small but seemingly important subtleties.

Although the LCCs are still ramping up, their impact is already pronounced on Japan's transport sector. Buses and even some train lines are offering advance purchase fares - and are specifically recognising the new competitive climate. With experience they will get more savvy and advanced with their yield management. And there will surely be more change to come as the LCCs inevitably grow, sometimes making a step backwards but still going forward.

Japanese aviation and tourism officials will speak on the growth of Japanese LCCs and changes to Japanese tourism as a result of greater domestic and foreign LCCs at CAPA's second annual LCCs and New Age Airlines in North Asia Summit to be held in Seoul, 4/5 September. It is proudly hosted by Incheon International Airport Corporation and supported by Travelport, SITA, Sabre and Bombardier. Click here for full details.