Australia’s international traffic is on the rise with the Bureau of Infrastructure, Transport and Regional Economics (BITRE) reporting a 10.8% year-on-year improvement in international passenger numbers for Sep-2010, to 2.3 million. This follows strong month-on-month growth rates of more than 9% recorded since Sep-2009, except for Apr-2010 and May-2010 where the growth rate was more moderate.

The rise for Sep-2010 came on a 7.3% rise in flights to 12,097. Fifty-two international scheduled airlines operated services to/from Australia during the month, including four dedicated freight airlines but excluding airlines operating only via codeshare arrangements.

Total international yield excluding foreign exchange for the 12 months to Oct-2010 was up 14.2% year-on-year. 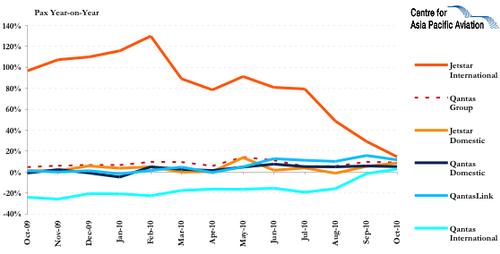 The share of passenger traffic accounted for by Australian designated airlines rose 0.6 ppts for the period, to 33.9%. The Qantas Group, Pacific Blue (3.8% - excludes services operated under New Zealand designation), Strategic Airlines (0.2%) and V Australia (2.6%) contributed to the Australian airline share in Sep-2010.

Sydney remains the dominant international gateway with 43.0% of all international passengers for the 12 months ended Sept-2010, followed by Melbourne, Brisbane, Perth and Gold Coast. Passenger numbers for the year ending Sep-2010 grew by 37.4% at Gold Coast, 15.6% at Perth, 14.7% at Melbourne, 9.0% at Sydney and 4.0% at Brisbane. 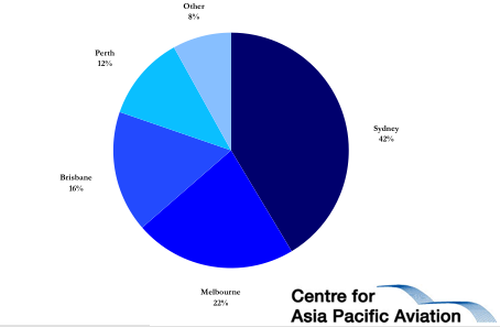 International traffic growth unlikely to slow in near future

The growth in international traffic is unlikely to slow, as a number of carriers are set to launch new routes or increase frequencies to/from the country over coming months, particularly for summer 2010-11.

Discount domestic fares down ahead of Christmas

More recently, Australia’s business and full-economy domestic fares were up year-on-year for Nov-2010, while restricted economy and best discount fares were down for the month. 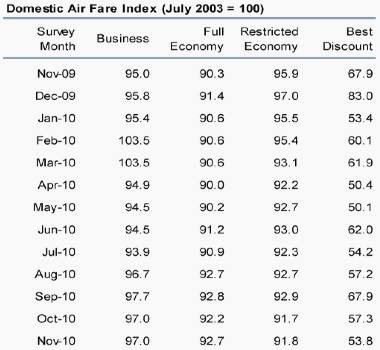 Best discount fares in particular have fallen, presumably ahead of an increase again in Dec-2010 for the Christmas holidays. 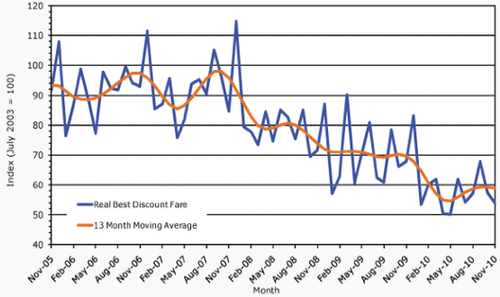