Indonesia’s third largest airline group, Sriwijaya, is planning to resume expansion in 2015 as conditions improve in Indonesia’s domestic market. Sriwijaya plans to add four 737-800s in 2015 and is close to placing an order for up to 30 new turboprops which will be operated by its regional subsidiary Nam Air.

Sriwijaya adopted a dual-brand strategy in 2013 with Nam being used as a full-service regional carrier. At about the same time Sriwijaya tried to move up market by introducing a business class.

But Nam has not expanded since launching in late 2013 while Sriwijaya shrunk in 2014. Sriwijaya is now again adjusting its strategy by removing business class.

In Indonesia, Sriwijaya is the third airline largest group, well behind market leader Lion and Garuda but ahead of AirAsia. Indonesia AirAsia and start-up Indonesia AirAsia X currently operate a combined fleet of 31 aircraft.

The middle group has been squeezed in recent years as competition has intensified with LCCs. Airlines in Indonesia’s medium-service category offer some frills including drinks and snacks but generally compete on price with the LCCs. 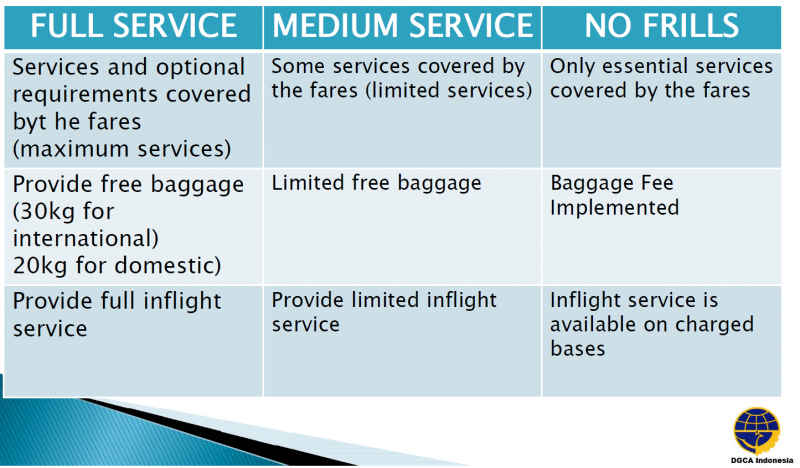 Two of the three largest airlines in the middle category, Batavia and Merpati, have ceased operations, leaving Sriwijaya as the only significant sized carrier in this grouping. The other six airlines from the medium-service category that are currently authorised by Indonesia’s DGAC include Nam Air, Aviastar, Kalstar, Transnusa, Trigana and Xpress Air.

Passenger traffic in the middle category has shrunk since 2009, driven by consolidation, while traffic in the full-service and no frills categories have more than doubled. (Note: Indonesia passenger data for 2014 is not yet available.)

Sriwijaya tried to move upmarket in 2012 by introducing a business class product.

Sriwijaya, Batik and Garuda are currently the only Indonesian carriers with a business class product. But Sriwijaya recently decided to start phasing out its business class.

Also in 2012 Sriwijaya decided to establish Nam as a budget airline subsidiary. This was a sensible strategy as it would have resulted in clear differentiation between the group’s two brands. Under the original strategy the two brands would have operated side by side on trunk routes, with Nam being used to compete against Lion and Garuda budget subsidiary Citilink at the bottom of the market and the Sriwijaya brand against Batik and Garuda at the top end.

But Sriwijaya reversed course in 2013 and decided instead to position Nam as a regional full-service carrier operating 737-500s in two-class configuration.

The current two-brand strategy essentially created a mere duplicate. Sriwijaya and Nam both operate 737-500s and provide the same product. Nam does not have its own website. All its flights are sold on Sriwijaya’s website and other Sriwijaya distribution channels.

Sriwijaya has only differentiated its two brands from a network perspective. Nam has been mainly operating thin under-served regional routes. But in theory Sriwijaya could also operate these routes as both brands have 737-500s, which is the smallest aircraft in the 737 family.

Sriwijaya has been very slow in renewing fleet

The group says it currently operates 17 737-500s, including two under Nam Air. This includes 13 aircraft which were leased from GECAS in 2012 and were previously operated by United Airlines.

Sriwijaya retained United’s original 120-seat configuration including 112 economy and eight business class seats. All 13 of these aircraft were built in 1994 or 1995, according to the CAPA Fleet Database. The other four 737-500s in Sriwijaya’s fleet are also of the same vintage but have other owners.

Sriwijaya began a long overdue fleet renewal programme in 2012 when it took delivery of four second hand leased 737-800s. But plans to lease more 737-800s as well place orders for new 737s and E190s have repeatedly been delayed. As a result the group did not add any aircraft for nearly two years.

Sriwijaya plans to phase out three of its ageing 737-400s in 2015, leaving one aircraft for growth. But capacity will increase at a faster clip as the 737-800s are larger and can be utilised more than the ageing 737-400s.

The group’s original fleet plan was to lease 10 737-800s by 2013 and order 20 new 737-800s from Boeing for delivery from 2016. But the planned order with Boeing never materialised. Sriwijaya also never completed a tentative order for 20 E190s and 10 options which Embraer announced in mid-2011 “subject to final documentation”.

Sriwijaya is now negotiating with ATR and Bombardier the acquisition of 20 to 30 turboprops. A selection between the ATR 72-600 and Bombardier Dash 8-Q400 is expected within the next couple of months. Leasing companies will likely be used to provide at least some of the aircraft. Deliveries could begin by the end of 2015.

Sriwijaya plans to allocate the new turboprop fleet to Nam. This will result in a more clearly defined role for the group’s second brand.

The Lion and Garuda groups both operate ATR 72s. Lion’s turboprop fleet is operated by its Wings Air subsidiary, which follows a regional low-cost business model. Garuda began operating ATR 72s in late 2013 and has turboprops along with its Bombardier CRJ900 regional jets under the sub-brand Garuda Explore.

Unlike Wings or Nam, Garuda Explore does not have its own air operator’s certificate and operates under Garuda’s GA code.

Garuda has been using its expanding ATR 72-600 fleet to launch services to secondary destinations which were previously only served by Wings Air and smaller independent regional carriers. Sriwijaya could potentially use its planned fleet of turboprops to start competing against Garuda and Wings/Lion in similar markets. But Sriwijaya is instead planning to focus its new turboprop fleet on opening new point to point regional routes which are not currently served.

The Sriwijaya Group has two network plans for Nam depending on which turboprop type is acquired. If the Dash 8-Q400 is acquired Nam will operate longer secondary routes, taking advantage of the Dash 8’s speed and range. The ATR 72-600 is more suited for shorter routes.

The new network plan for Nam is sensible as it enables the airline to carve out a niche and avoid competition. As Indonesia economy and middle class continues to expand rapidly there is growing demand for non-stop services connecting secondary cities. While Indonesia has the world’s fifth largest domestic market, almost all the capacity is currently allocated to trunk routes or short regional hops connecting a hub with a secondary city. Routes connecting two secondary cities are generally not served non-stop.

Sriwijaya will transition back to all-economy product

But Sriwijaya may not end up following through with the latest plan for the Nam subsidiary. The group has gone through multiple business plans for Nam and the parent brand – along with several fleet plans. It is therefore hard to say with confidence that the latest plan will be implemented.

Sriwijaya is also making another strategic U-turn as it has decided to phase out business class. Sriwijaya plans to remove the business class cabin from its six 737-800s and take additional 737-800s in all economy-configuration. A decision has not yet been made on reconfiguring the 737-500s as these aircraft may be phased out over the next few years.

The 737-300s and -400s have remained in all-economy configuration as Sriwijaya was reluctant to invest in retrofitting ageing aircraft when initially deciding in 2012 to introduce business class on some routes.

Sriwijaya’s  experiment with business class on 737-500s and 737-800s backfired as its business class product has not been able to command sufficient yields or load factors. Competing at the top of the market against Garuda, which has a loyal following among wealthy Indonesians, has proven to be a challenging task. The 2013 launch of Batik, which operates 737s and A320s in two-class class configuration, made it even more difficult for Sriwijaya to compete at the top of the market.

Reverting back to an all-economy product is sensible given the dynamics of the market. But Sriwijaya still faces a long-term risk of being squeezed by full-service carriers at the top and LCCs at the bottom.

The group previously looked at transitioning one of its brands to LCC while positioning the other brand at the top of the market. But Sriwijaya is now pressing forward with both brands retaining its middle market or “medium service” position. The group has no plans to apply for a category change with Indonesia’s DGAC for either of its two AOCs.

Strategically Sriwijaya may need to revisit how it positions its two brands. While focusing Nam on underserved regional markets makes sense, the group may need to implement further strategic adjustments to avoid being squeezed by much larger Lion and Garuda.

Sriwijaya however has survived a difficult period in the Indonesian market which led to several casualties among its peers. Sriwijaya also struggled in 2014 with passenger traffic declining for the first time in its history. Sriwijaya had tripled its annual passenger numbers from 2006 to 2013, emerging during this period as Indonesia’s third largest airline.

Market conditions in Indonesia were difficult in 2H2013 and most of 2014 due to depreciation of the rupiah and slower economic growth. The rupiah is now again on the decline but generally domestic market conditions are more favourable. Demand has been on the upswing and capacity is at relatively more rational levels as several carriers have exited or cut back. All Indonesian carriers are also benefitting from the drop in oil prices, particularly operators of ageing aircraft such as Sriwijaya.

Sriwijaya is optimistic it can again grow domestic passenger traffic in 2015. Sriwijaya is also planning to pursue international expansion in 2015 through a mix of new charter and schedule routes. The group is particularly keen on the fast-growing Indonesia-China market.

Sriwijaya is expanding in China and Malaysia

Sriwijaya launched three weekly flights from Bali to Hangzhou in Jan-2014. These flights are categorised as scheduled but are block booked by a Chinese travel agent partner. Sriwijaya also operated similar scheduled services to Chengdu in 2014 and has been serving Changsha on the same basis the last four months. Chengdu has not been served since Oct-2014 while flights to Changsha are not scheduled to continue beyond Mar-2015.

Sriwijaya is currently designated for six scheduled routes to mainland China. The other three it has not yet operated. But it also has served several other Chinese cities with seasonal charters.

Sriwijaya also currently operates three routes to Malaysia. Sriwijaya has operated the Medan-Penang route for several years, which it currently serves with one daily frequency. It launched services from Medan to two secondary destinations in Malaysia, Ipoh and Terengganu, in late 2014. Medan-Ipoh, which Sriwijaya serves four times per week with 737-500s, is also served by Lion Group’s Malaysian affiliate Malindo Air with ATR 72s while Medan-Terengganu, which Sriwijaya serves with three weekly flights, it not served by any carrier.

Both new Malaysia routes are mainly supported by travel agencies, providing Sriwijaya with little risk as is the case with its China routes. Sriwijaya sees opportunities to open up more regional international routes as it resumes fleet expansion.

The Sriwijaya Group is entering a new chapter as it tries to carve out a sustainable niche for both its airline subsidiaries in the dynamic Indonesian marketplace. There are huge opportunities in Indonesia for airlines of all categories.

But competition continues to intensify and increasingly the Indonesian market is controlled by the Lion and Garuda groups. Sriwijaya could be at a critical juncture.