Brazil's Gol has shifted the focus of its plans to re-launch US flights by applying for one-stop service to Miami and Orlando via Santo Domingo in the Dominican Republic after its attempts to serve Miami via Caracas were denied by the Venezuelan government. Gol’s failed attempt results in American Airlines and Venezuela's Santa Barbara Airlines retaining a duopoly in the US-Venezuela market, and a less desirable route for pick-up traffic for Gol through Santo Domingo.

The decision by the Venezuelan government appears to reflect a trend by the country’s authorities to deny South American airlines access to the US through Caracas. Aerolineas Argentinas earlier this year attempted unsuccessfully to secure authority to route its new second daily Buenos Aires-Miami frequency through Venezuela’s capital. Aerolineas will now launch the new flight as a non-stop service in Dec-2012 (it already operates one daily non-stop between Buenos Aires and Miami).

Meanwhile, smaller Caribbean carriers are trying to fill the void in the under-served US-Venezuela market by offering more one-stop connections via the Caribbean to circumvent the restrictive air transport agreement between the US and Venezuela.

Gol in Mar-2012 unveiled plans to launch US service as it submitted an application with Brazilian authorities for 14 weekly US-Brazil frequencies. It also applied to Venezuelan authorities for pick-up rights through Caracas from Sao Paulo to Miami.

The carrier was initially expected to use the other seven frequencies for non-stop flights from Belem, a growing region in northern Brazil, to Miami, but is now looking to use the other seven frequencies for a Rio de Janeiro-Orlando service via Santo Domingo. (Gol needs a stopover for Sao-Paulo Miami and Rio-Orlando as the carrier only operates Boeing 737s, while US flights from Belem could have been operated non-stop as it is closer to the US and is within narrowbody range of Miami.)

Gol operated a scheduled service to Miami for less than a year during 2007 with Boeing 767 aircraft as part of a long-haul push on routes previously operated by Varig, which Gol acquired earlier that same year. Miami along with other long-haul flights were quickly dropped due to unprofitability while the 767s were removed from scheduled service. (Gol for some time used the 767s for charters, including to the US.)

The re-launch of flights to the US is part of a new focus on international markets. During Jan-2012 Gol decreased its capacity deployed to international markets by 30% year-over-year, but during 3Q2012 its supply to those markets grew 7% while domestic capacity decreased 8% year-over-year. The carrier has spent nearly all of 2012 constantly pulling down domestic supply in the Brazilian market as yield weakness that began during the latter half of 2011 continued throughout 2012.

In addition to pursuing flights to Miami, Gol has taken advantage this year of casualties of smaller South American airlines and expanded its international flights in the wake of their demise. It introduced daily non-stop service from Sao Paulo to Montevideo after Uruguayan carrier Pluna ceased operations in Jul-2012. Gol also launched flights from Sao Paulo to Santa Cruz in Bolivia after Bolivian carrier Aerosur ceased operations in May-2012.

While Gol quickly capitalised on the misfortune of other South American carriers, its attempts to re-enter the Miami market initially proved unsuccessful as the Venezuelan government seems to have denied its request for pick-up rights through Caracas even though the Brazil-Venezuela pact technically allows for some pick-up rights through Venezuela.

Opting to route passengers through the Caribbean

Now Gol is proposing new routes to Miami from Rio de Janeiro through Santo Domingo, and from Sao Paulo to Orlando with a stopover in Santo Domingo.

The Santo Domingo-south Florida market is fairly well served by American Airlines from Miami (which offers roughly 4,200 weekly seats in the market) and also from low-fare carriers JetBlue and Spirit Airlines, which contribute approximately an additional 1,200 seats to Santo Domingo from Fort Lauderdale, located 40km away from Miami.

There is no doubt that Gol’s preference would have been to develop a Miami schedule with a stopover in Caracas, given that the Miami-Caracas market is underserved, with a US legacy carrier – American Airlines – accounting for roughly 54% of the seating capacity. Venezuelan carrier Santa Barbara Airlines represents about 42% of the seat share, giving those two airlines a duopoly on the pairing as LAN accounts for only about a 5% share. 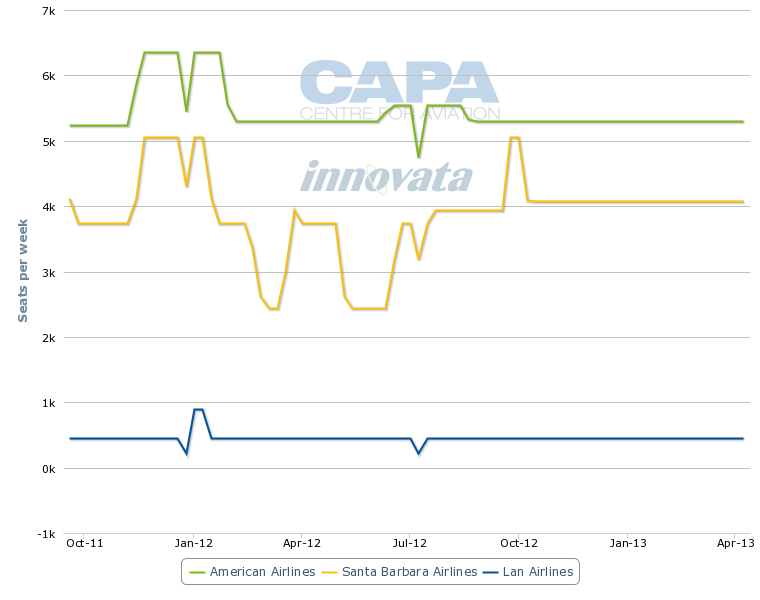 Even though Gol only offers a single-class service, the Miami-Caracas market generates a larger share of business class passengers than the leisure-dominated route of Santo Domingo-Miami. Based on current schedules in Innovata (22-Oct-2012 to 28-Oct-2012), nearly 5% of the one-way weekly seats departing Caracas are business class seats, which is also the global average. The market commands a higher percentage of business traffic due to the large oil industry in Venezuela, which is one of the top five oil suppliers to the US. 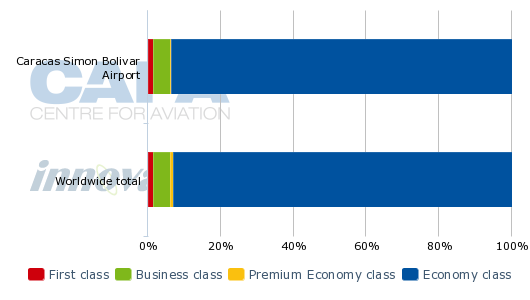 Gol could have likely secured some price sensitive business travellers through Caracas by charging more than its average fare, but still offering prices that were significantly lower than American.

The decision by Venezuela’s government to deny Gol’s request for stopover service was likely driven by a desire to protect Santa Barbara Airlines. Even though the carrier is privately owned, Gol would have likely taken more passengers from Santa Barbara than American due to American’s ability to generate strong point of sale traffic in the US market.

Venezuelan authorities probably used the same logic in denying a request from Argentine carrier Aerolineas Argentinas to route a second daily Buenos Aires-Miami service through Caracas. The Buenos Aires-Miami market is also dominated by American Airlines, which holds roughly 52% of the seats in the market compared with a 27% share by Aerolineas and LAN’s 21% share. Aerolineas appeared to be attempting to supplement its second daily flight with passengers in Caracas, but now will have to attempt to stimulate enough local demand to sustain the second daily flight. 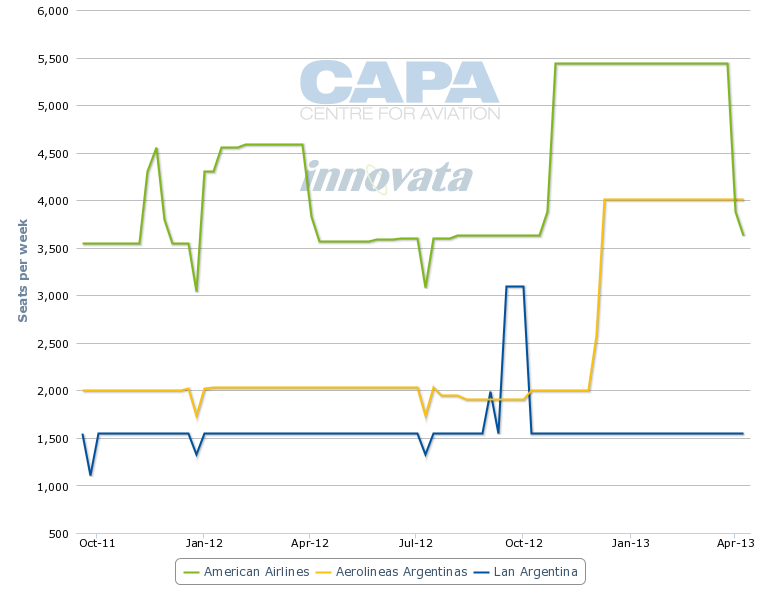 As Venezuela appears to be stringent in granting pick-up rights in Caracas for larger carriers in South America, smaller Caribbean carriers are taking advantage of transiting passengers from south Florida through the islands to Venezuela.

Aruba-based Tiara Air is launching its first service to the US beginning in Nov-2012, when it inaugurates flights between Aruba and Fort Lauderdale. Tiara explains it has been working since the end of 2011 with authorities to incorporate a Boeing 737-300 into its fleet of three 30-seat Shorts 360 turboprop aircraft and a Learjet 35 used for private jet and air ambulance services. With the 737-300 being incorporated into its schedule, Tiara states the commercial process has been started to open new routes to Fort Lauderdale, Caracas as well as Medellin and Armenia in Colombia.

Tiara currently accounts for about 10% of the seating capacity on offer between the Caribbean and Venezuela, but it appears the carrier has ambitions to expand its offerings in the country with new service to Caracas. Maracaibo is currently Tiara's only destination in Venezuela and is served with one daily Shorts 360 flight. New jet flight from Fort Lauderdale to Aruba and from Aruba to Caracas could be the groundwork for building substantial connection traffic to Caracas through Aruba. 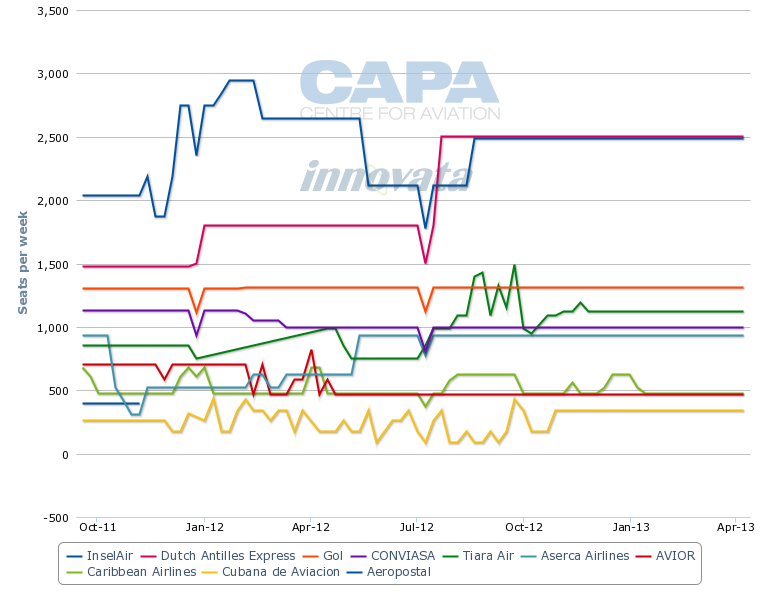 Tiara will only faces competition from Spirit Airlines in the Fort Lauderdale-Aruba market, which is largely an origin and destination route from the US. But Florida has also seen a significant rise in its population of individuals with Venezuelan descent during the last decade, and increasing demand between south Florida and Miami has accompanied the rise in the Venezuelan population in the US.

Spirit Airlines has been attempting to take advantage of the visiting friends and relatives (VFR) traffic growing between south Florida and Venezuela by attempting to launch flights from Fort Lauderdale to Caracas, noting Venezuela and Cuba are the remaining holes in its Latin American network. But so far the carrier has been unsuccessful in its efforts to persuade Venezuelan authorities to grant approval for the flights to Caracas.

Another Caribbean carrier, Curacao-based InselAir, is also a large player in the US-Venezuela market with a one-stop product via Curacao. Tiara clearly have taken note of the strategy used by InselAir for tapping into this under-served market.

InselAir currently accounts for 24% of capacity between the Caribbean and Venezuela. InselAir offers service from Curacao to the Venezuelan destinations of Barquisimeto, Caracas, Las Piedras and Valencia. In the US the carrier offers nine weekly flights from Miami to Curacao and one weekly flight from Charlotte to Curacao (it also operates from Miami to Bonaire and Port Au Prince).

A majority of the InselAir’s traffic is comprised of transit passengers as Curacao is a tiny local market. The biggest transit market is neighbouring Aruba (Curacao-Aruba is InselAir's biggest route) but the carrier also sees a large number of transit passengers heading to or originating at its South American destinations (in addition to the four destinations in Venezuela it serves Medellin in Colombia and Paramaribo in Suriname).

The carrier is the sole operator on flights from Curacao to Las Piedras and Barquisimeto. Curacao-Caracas is the most competitive market, served by Dutch Antilles Express, InselAir and Venezuelan carrier Avior. 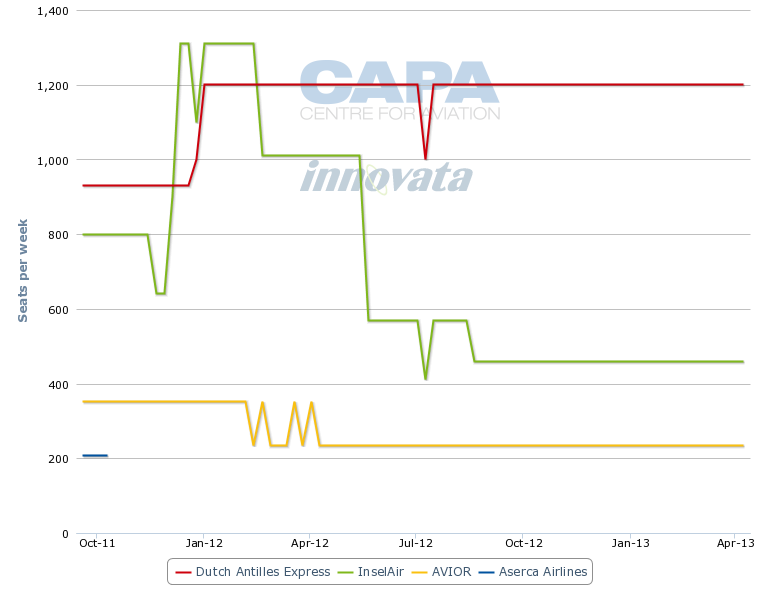 Dutch Antilles Express accounts for 63% of the roughly 1,900 weekly seats in the Curacao-Caracas market while InselAir holds a 24% share and Avior represents a share of 12%. Dutch Antilles Express inaugurated flights from Miami to Curacao in Jun-2012 and plans to bolster its weekly frequencies from 10 to 14 in Dec-2012.

Since launching service between Miami and Curacao, Dutch Antilles Express has built up a 32% share of the seats in the market, surpassing InselAir’s 20% share. American Airlines is the market leader in terms of seats, holding a 48% share. Dutch Antilles Express is likely enjoying a large volume of connecting traffic from Miami to its Curacao service since the 1,364 mile trip on the Miami-Curacao-Caracas routing its just four miles more than the 1,360 mile trip from Miami to Caracas. 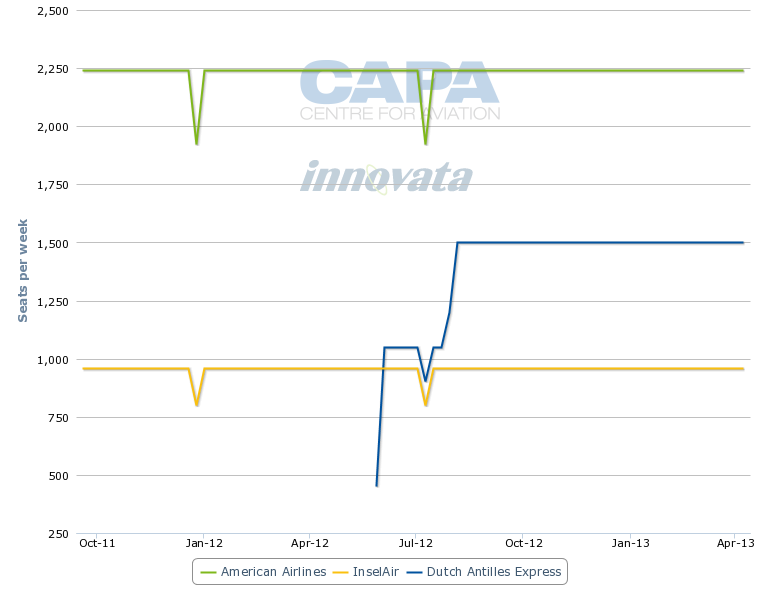 Tiara, InselAir and Dutch Antilles Express are taking advantage of the restrictive bilateral US-Venezuela air transport agreement by capitalising on connecting traffic from the US to Venezuela through the Caribbean. As those smaller carriers continue to benefit from the US-Venezuela demand, Aerolineas, Gol and Spirit will continue to lose out as Venezuela is unwilling to allow those three larger airlines access to the still under-served market. Since Venezuela seems unwilling to allow for traffic increases to the US, Gol is now being forced to seek out a less attractive alternative to re-launch its service to the US.