Efforts by Brazilian carrier Gol to convince the industry at large that its weak financial condition could turn a corner during 2H2012 so far have drawn little success. After the carrier recorded a 2Q2012 loss of BRL715 million (USD354 million) ratings firm Standard and Poors (S&P) opted to downgrade the carrier’s long-term corporate credit rating, concluding the company’s business risk profile as weak and highly leveraged. While the carrier’s Aug-2012 performance showed slight promise with a 1% rise in yields, pricing traction in the Brazilian domestic market remains weak, which will continue to pressure Gol’s results well into 2013.

Unlike its Brazilian rival TAM, which has a more diversified network with a larger number of international flights (and now has more network leverage through its merger with LAN), Gol’s focus until the last few months has been solely on the Brazilian domestic market. Yields in Brazil began weakening in 2011, and the country’s macroeconomic conditions have continued to diminish throughout 2012 as Brazilian GDP growth forecast are now 2% compared with previous estimates of 4%. It is a drastic drop from the 7.5% GDP growth posted by Brazil just two years ago.

All those factors and foreign exchange rate woes conspired to trigger a BRL700 million (USD346 million) loss for Gol during 2011 and a loss of BRL756 million (USD353 million) during 1H2012. At the same time the carrier’s adjusted gross debt for 2Q2012 was 16 times higher than its 12 months trailing pre-tax income, more than double than 2Q2011. 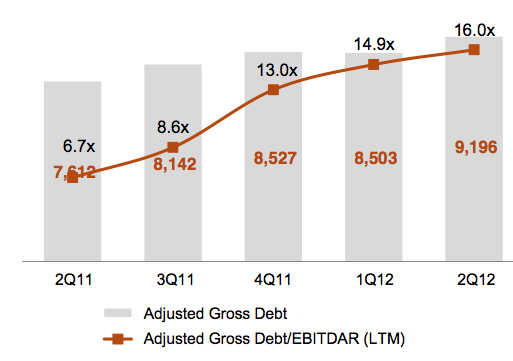 Gol has seen some positive results from its 2011 acquisition of smaller Brazilian domestic carrier Webjet as the company recorded more than BRL48 million (USD24 million) in synergies from the purchase since the end of 2011. But that has done little to deflect attention on Gol’s ongoing dismal financial performance.

Pushing for better days ahead

Gol is stressing efforts it has made in streamlining costs and continuing cuts in its domestic capacity throughout 2012 are allowing the company to foresee some improvement in its fortunes during 2H2012. However, investor relations officer Edmar Lopes warned the carrier is not declaring the exact level of improvement, “because we still need some, let us say, less volatility over the main indicators to be more positive”.

Despite proclaiming better days ahead, Gol is predicting the recording of a negative margin for 2012 after posting a negative net margin of 39% in 2Q212.

It is hard to tell how Gol will exactly right its course as one of the largest factors dragging down its results – foreign exchange rates – is largely out of the carrier’s control. Mr Lopes stated that BRL325 million (USD160 million) of the BRL355 million (USD175 million) slide in Gol’s pre-tax earnings for 2Q2012, or 91%, was attributed to foreign exchange rates. Gol estimated during 2Q2012 the Brazilian real decreased 23% against the US dollar, while S&P estimates that about 50% of Gol’s total cost are dollar-denominated expenses.

Asked how the company plans to manage a large external risk like exchange rates, Gol’s new CEO Paulo Kakinoff stated the airline is working hard to keep unit costs under control while looking for new ways to maximise unit revenues. While Gol’s unit costs excluding fuel increased sequentially from 1Q2012 to 2Q2012, CASK decreased from USD5.3 cents to USD5.1 cents year-over-year during 2Q2012. Gol maintains that its unit costs remain the lowest among a select group of its Latin American and US peers.

Unit cost of Gol compared with select Latin American and US carriers: 2Q2010 to 2Q2012 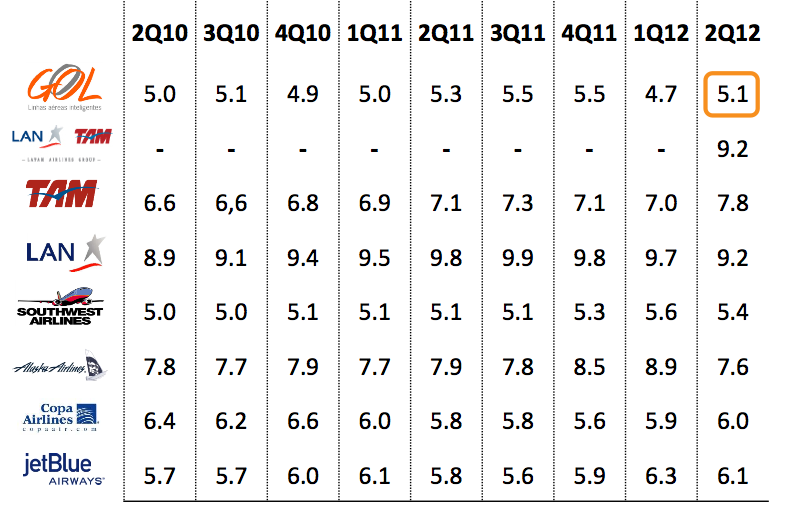 Recent efforts by Gol to maintain relatively low unit costs include strengthening an agreement with Delta TechOps (Delta now holds a 3.5% stake in Gol) and cutting staffing levels on Boeing 737-700 flights from four to three crew members. At the same time Gol recorded a 2.5% rise in unit revenues during 1H2012 through the reduction of 130 daily flights from the combined Gol-Webjet operations, strengthening its position in southern and southeast airports in Brazil and expanding its buy-on-board offerings to bolster its ancillary revenues.

Despite those efforts Gol’s yields only grew 0.8% during 2Q2012 and 1.6% for 1H2012. TAM faced the same difficulties with exchange rate pressure during 2Q2012, which also helped push the carrier into a quarterly loss of BRL928 million (USD459 million). But TAM recorded much better yield growth in the Brazilian domestic market during 2Q2012 of 14.3% on a 1.2% decline in capacity.

The disparity in TAM and Gol’s performance in the Brazilian domestic market continued in Aug-2012 as Gol’s domestic traffic fell 6.4% on a 8.5% reduction in capacity. LATAM (driven by TAM’s operations) recorded a 12.6% rise in Brazilian traffic year-over-year during Aug-2012 on a 2.8% drop in capacity. TAM’s 74% load factor was also 3ppts better than the 71% recorded by Gol in Aug-2012.

Efforts by Gol and TAM to rationalise the Brazilian domestic marketplace through capacity reductions have been met by increases from fast-growing smaller domestic players seeking to establish themselves, which is creating challenges for the country's larger carriers in mitigating negative macroeconomic conditions.

Data from Brazil’s ANAC show that from Jan-2012 to Jul-2012 all of Brazil’s smaller carriers increased capacity substantially. Avianca Brazil’s supply increased by 98%, followed by a 62% rise from TRIP. Azul’s rapid growth continued as its capacity grew 37% year-over-year while Webjet also grew supply 17%. Conversely, Gol’s supply fell 2% during that time while TAM only produced a 1% capacity increase.

As a result of their declining supply Gol and TAM have relinquished market share as Gol’s share of the domestic market fell 4ppts year-over-year from Jan-2012 to Jul-2012 to 34% while TAM’s share dipped 2ppts from 42% to 40%. Avianca Brazil, Azul, TRIP and Webjet all saw market share gains associated with their continuing growth.

DGAC data from the corresponding period of Jan-2011 to Jul-2011 show just how much the Brazilian domestic market has deteriorated during the last year. During that time total capacity in Brazil increased by 14% as traffic grew 21%. For the same timeframe in 2012 both capacity and traffic diminished equally and considerably by 7%. During 1H2011 TAM’s capacity increased 14% as traffic jumped 22% while Gol recorded a 5% rise in capacity and 12% traffic growth.

Mr Kakinoff at the start of 3Q2012 declared that the competitive environment remained tough, and said yield recovery was slow. He also concluded that Gol’s market share, “in combination with our main competitors, is going down because the newcomers are investing a lot in increasing their capacities to regional flights”.

Both Gol and TAM are continuing to revise their capacity targets for 2012 downwards in the hopes of ushering sustained market rationalisation. Gol estimates its supply declining 2% to 4.5% during 2012 while TAM expects a decline of 2% to 3%. But it is not clear their capacity discipline will have the desired effect if the smaller carriers looking to make their mark keep growing at a rapid clip.

Looking outside of Brazil

Gol is starting to make an international push into regional South American markets in an attempt to diversify out of the weak Brazilian domestic market. The service includes new daily nonstop flights from Sao Paulo to Montevideo (taking advantage of Pluna’s demise), and from Sao Paulo to Santa Cruz, Bolivia (filling a void created by the cessation of operations by Aerosur). Other new services include direct flights from Sao Paulo to Asuncion and an increase in service from Porto Alegre to Buenos Aires Ezeiza airport.

The carrier also has applied to serve Sao Paulo-Miami through a stop-over in Caracas. Gol briefly served Miami with Boeing 767s in 2007 after it acquired Varig, but dropped the service within a year. Prior to Brazil’s economic slowdown and the onset of weakening demand conditions in the country’s domestic market, Gol had made a concerted effort to focus on flights in Brazil and service within South America lasting less than three hours.

Management at Gol is taking great effort to stress the airline is taking all the necessary steps to right its course to regain profitability. But warnings of negative margin production for 2012 and slow yield recovery in Brazilian domestic yields are not reassuring signs the carrier will reverse its fortunes in the near future. Its debt levels are producing new concerns as S&P warns overcapacity in the Brazilian domestic market will delay the carrier’s recovery.

Unless overall supply in the domestic market place decreases, Gol’s yields will continue to suffer, and unlike TAM, it does not have the benefit of a large network that would allow it to redeploy significant amounts of capacity into other markets. While Gol remains optimistic improvements will start to emerge this year, market forces are working against the carrier’s recovery.