South America airline group Sky took a major step in 2019 with the establishment of a new subsidiary in Peru, and through its own resolve and with the help of market exits by other Peruvian domestic competitors, in less than a year of operations Sky has become the third largest domestic operator in Peru based on passengers carried.

Now that Sky is firmly entrenched in Peru’s domestic market, the airline is examining new international routes and is planning to introduce service from Lima to Cancún and Punta Cana in Apr-2020. The airline has also set its sights on serving the US from Lima, and hopes to inaugurate flights to Miami later in 2020.

Sky’s international ambitions outside South America are only just beginning, and once the airline begins taking delivery of its AirbusA321XLR narrowbody aircraft, it will be able use those jets to reach further into North and Central America and points into the Caribbean from its major bases in Lima and Santiago.

During the past few years Chile’s Sky Airline has transitioned from a full service airline to a low cost carrier, and faced new competition in Chile’s domestic market after the ULCC JetSMART launched operations in 2H2017.

Overall, Chile’s domestic passenger levels increased by 11.3% year-on-year in 2019, to 15 million, even as the country’s domestic market contracted late in the year due to civil unrest. 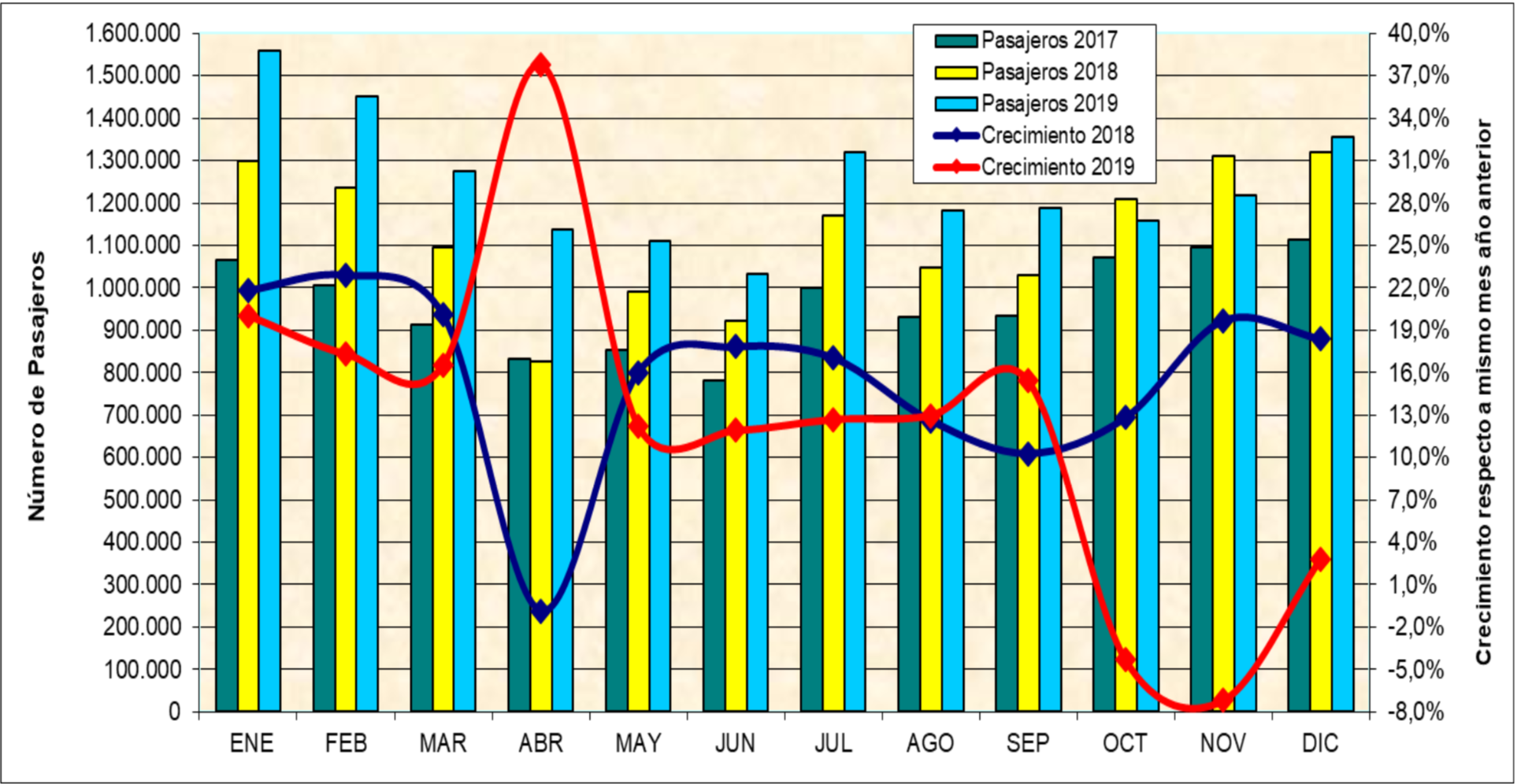 With its transition to the low cost model, Sky opted to examine expansion elsewhere in Latin America, concluding that the Peruvian market was expecting a real “LCC to enter with new aircraft, and that’s what we’re going to offer”.

Sky launched operations in Peru in Apr-2019 and current serves 11 domestic destinations in the country.

From its launch in Apr-2019 to the end of 2019, Sky transported approximately 1.1 million passenger in Peru’s domestic market.

As of early Feb-2020, Sky Peru was the country’s second largest airline measured by domestic ASK deployment, with a 16% share.

Domestic ASK share among Peru's airlines, as of early Feb-2020 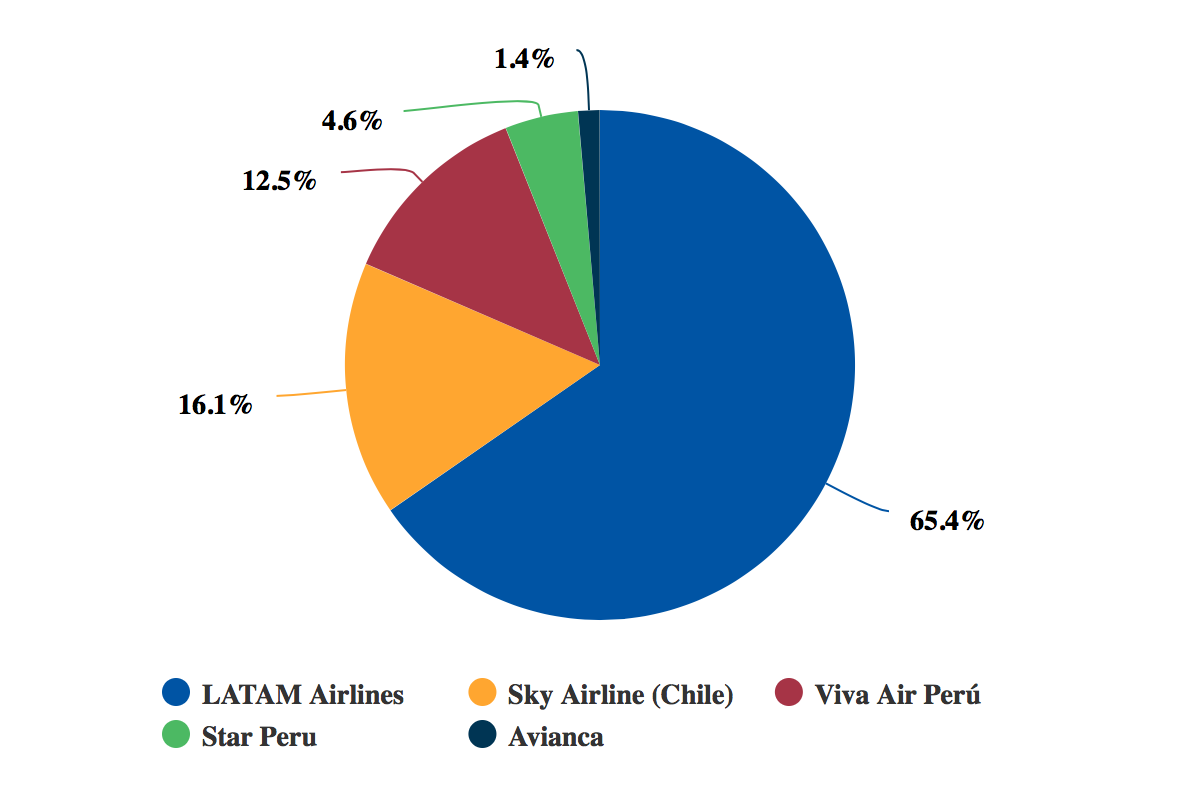 Sky has benefitted from using the lessons learned from its LCC transition and the demise of two of Peru’s weaker domestic airlines in 2018 and 2019: Peruvian Airlines, which at one point was the country’s second largest airline measured by passengers carried, ceased operations in Sep-2019, and LC Peru exited the market in Nov-2018.

Sky uses Lima as a springboard for international expansion in 2020

Sky Peru is turning its attention outside the country’s domestic market in 2020.

During Apr-2020 Sky Peru is introducing flights from Lima to Cancún and Punta Cana.

Interjet and LATAM Airlines Group operate flights from Lima to Cancún, and data from CAPA and OAG show that Avianca exited the route in early 2020. LATAM and Avianca both operate service from Lima to Punta Cana, but it appears that Avianca is ending that service just before Sky’s launch.

Avianca has been reducing its overall presence in Peru’s domestic market and culling other routes due to underperformance. For 2020, Avianca aims to bolsters connectivity as its hub in Bogotá, with plans to increase its international city pairs from El Dorado International by 20%.

See related report: Avianca Holdings: positive start to 2020 after a rocky start to 2019

Mr Mino also said that Viva Air Peru had put some of its international expansion on standby, which, along with the fate of LC Peru and Peruvian Airlines, has changed Peru’s landscape during the past year.

In addition to its new international service to Cancún and Punta Cana, later in 2020 Sky is aiming to introduce service between Lima and Miami, which is a route served by LATAM, American and Avianca.

Sky envisages building a solid international and domestic network by 2024

Sky will become an all-Airbus A320neo operator in April of this year, said Mr Mino, and its Airbus A321XLR aircraft are joining the airline’s fleet in 2023.

The new A320XLRs open up numerous possibilities for Sky: Mr Mino touted that the aircraft’s range could enable flights from Lima to San Francisco, Los Angeles Toronto and New York, and from Santiago to the Caribbean and Miami.

Mr Mino also remarked that Sky is able to benefit from counter seasonal patterns in Chile and Peru, and move its assets around from one country to another.

In some ways, Sky has quietly executed its plan to maintain its leading position in Chile and stake a claim in Peru, which is a growing market in South America. Other airlines often talk of Lima’s strategic location, particularly as a North-South transit point for the Americas.

Now, after building up a solid presence in the country’s domestic market, Sky believes opportunities are ripe to use Lima as an international launch pad in upper South America for routes to North America and elsewhere.