Peru’s domestic aviation landscape has undergone significant changes in the last year and these culminated in the recent suspension of service by Peruvian Airlines, which had risen to become the country’s second largest airline.

But the fate of Peruvian and other airlines has increasingly been called into question as low cost operators Viva Air Peru and Sky continue to grow in the market.

LC Peru, which had nearly an 8% share of Peru’s domestic in 2018, has now ceased operations, and the question will be whether Peruvian can revive itself. Avianca Peru has turned its attention to international destinations, which are also creating some opportunities in the country’s domestic market.

Even with all the jockeying occurring in Peru’s domestic market, the long-standing market leader LATAM Airlines Peru is maintaining its dominance and is also looking at ways it can take advantage of shifts in the domestic landscape.

Domestic passenger growth in Peru has been among the fastest in Latin America during the past few years, jumping from 5.5 million annual passengers in 2010 to 12.7 million in 2018.

Despite the more than doubling of passenger levels in the Peruvian domestic market over the past eight years, there is still plenty of room for passenger stimulation. Peru’s trips per capita in 2017 were just 0.5, which nevertheless was a jump of 102% since 2010.

Aside from LATAM Airlines Brazil retaining its leading position in the market, significant changes have occurred in Peru’s domestic market during the past few years.

Avianca Peru, which was the country’s second largest airline for a number of years, has been steadily reducing its presence in the domestic market; most recently the airline pulled out of Trujillo, Juliana and Puerto Maldonado.

Avianca executives recently explained that the company would maintain its presence in the Lima-Cuzco market, but is planning to focus largely on international routes from Peru’s capital to Latin America and the US.

As Avianca relinquished it domestic share, Peruvian Airlines became the second largest airline in the country’s domestic market, holding a 13.8% passenger share in 2018.

But there have been shifts in the country’s domestic market during the past year: Chile’s Sky Airline has launched a new domestic subsidiary in Peru and Viva Air Peru, which launched domestic operations in 2017, has continued to grow.

Peruvian’s strategy has been somewhat questionable during the past year.

In 2018 it pledged to order 10 Sukhoi SSJ-100s and 10 Irkut MC-21 jets, for operation by a new subsidiary, but nothing ever materialised.

Peruvian also operates with a much older and less fuel efficient fleet than its start-up LCC rivals, with an average fleet age of 29.7 years.

Peruvian Airlines average fleet age for aircraft in service: as at 07-Oct-2019 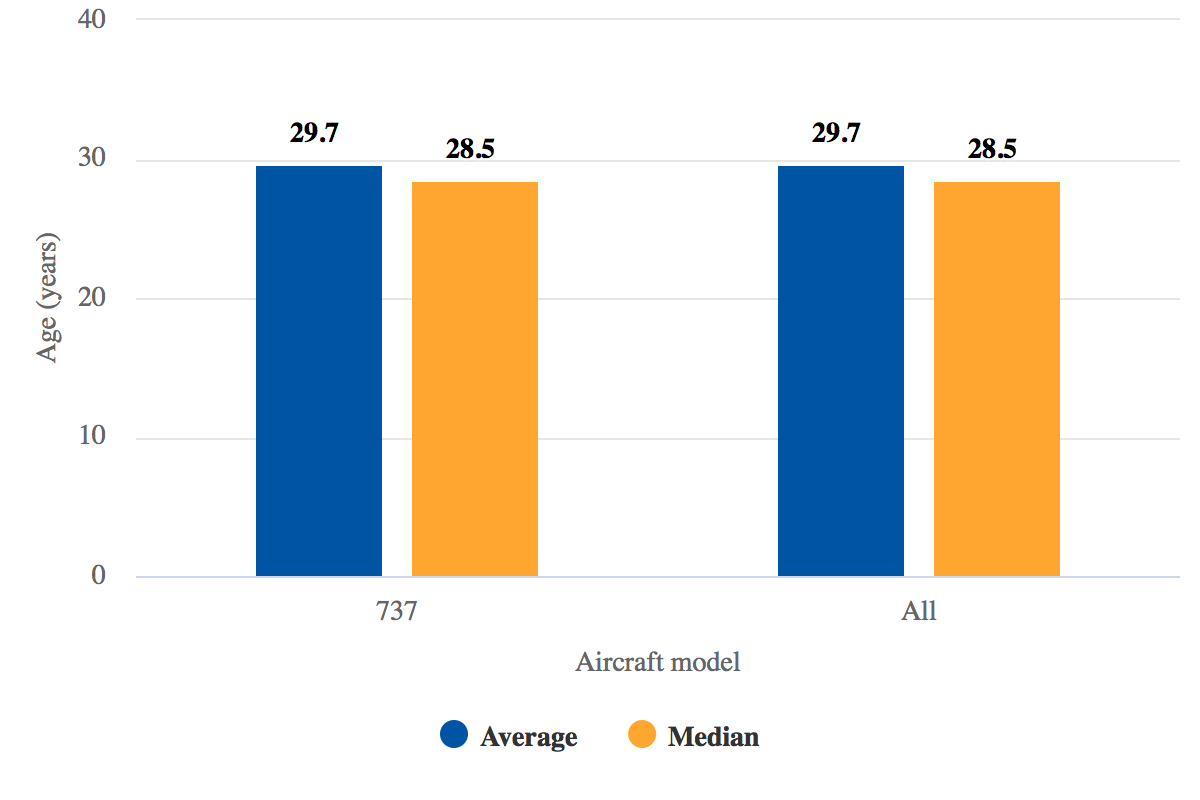 In early Oct-2019 Peruvian reportedly had to cancel its operations due to a freeze on its bank accounts, and the airline subsequently suspended operations until further notice.

The suspension follows the market exit of LC Peru in late 2018 after it temporarily halted service due to a suspension of its insurance policy. LC Peru has never resumed operations.

Sky, which has long been Chile’s second largest airline, successfully transitioned to the low cost model a couple of years ago.

Sky Peru launched service in Apr-2019, and recently its CEO Jose Raul Feldmuth stated via his LinkedIn account that the airline had transported 500,000 passengers during its first six months of operations and noted that it is likely the airline will exceed its passenger targets for 2019.

Before launching its new subsidiary, Sky executives concluded that the Peruvian market was expecting a real “LCC to enter with new aircraft, and that’s what we’re going to offer”.

Viva Air Peru’s parent company is owned by Irelandia Aviation and Grupo IAMSA. Previously, Viva Air Peru has stated that it would achieve an 11% domestic market share in 2019 and, given its 12.4% share for the 7M ending Jul-2019 and the low likelihood of Peruvian returning to service, the prospects for Viva exceeding that goal by a solid margin look bright.

LC Peru’s exit and Peruvian being unlikely return to service obviously creates opportunities for both Viva Air Peru and Sky to continue growing their shares and for there to be overall continued growth in Peru’s market.

However, LATAM Airlines Peru will continue to be a fierce competitor, previously having determined that interesting opportunities were arising in the country, given the changes that are occurring within Peru’s domestic market.

As a result of the shuffling in position among some of Peru’s domestic airlines, LATAM achieved a 61.8% market share for the 7M ending Jul-2019, compared with a share of 58% in 2018 (see chart above).

After a good deal of start-up activity there seems to be a shake-out occurring in Peru’s domestic market, with LC Peru and now potentially Peruvian exiting the market. Viva Air Peru and Sky have the key competitive advantages of strong parent companies and much younger, fuel efficient fleets critical for the execution of the low cost model.

Increasingly, it looks as if Peru’s domestic market will settle at three large domestic players, each with growing ambitions to take full advantage of the country’s steady passenger growth.