Austrian Airlines is facing a testing period after posting operating losses of well over EUR100 million (USD129 million) over the past two years. The carrier, under the leadership of new CEO Jaan Albrecht, is aiming to return to profitability in 2012 but significant changes will have to occur for this to become a reality. Austrian has stated that it suffers from multiple historical structural disadvantages, forcing it to implement a restructuring programme to stabilise the carrier and ensure its future “once and for all”. But rumblings from staff suggest this might not be plain sailing.

Cost reductions reaching EUR200 million (USD255 million) in 2012 are going to be key factors in the airline’s mission to return to the black. This year will also see continued uncertainty in the airline’s focus markets, with the crisis in the Eurozone and increased expenses resulting from the European Union’s Emissions Trading Scheme likely to affect plans at the carrier.

Austrian Airlines to report losses in 2011 despite traffic increase

Austrian reported an operating loss of EUR66 million (USD84.2 million) in 2010 and expects to report a similar loss for 2011. The second consecutive year of equally disappointing financial results came despite a 3.4% increase in passengers carried to 11.3 million in 2011. The airline’s long haul traffic decreased 1.1% last year to 1.6 million, partly driven by the earthquakes in Japan, which affected its Tokyo route.

The carrier, with substantial encouragement from its parent Lufthansa, plans to turn the results around in 2012. The improvement in the carrier’s financial performance will be through both cost reductions and higher revenues, suggesting potential fare increases and changes to Austrian’s route network, focusing on destinations with higher yields. 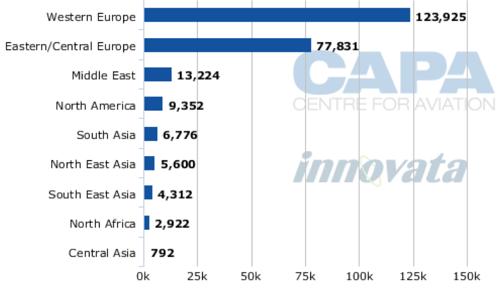 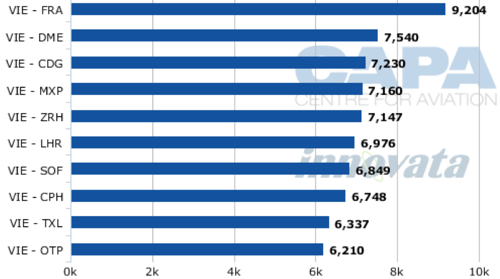 Austrian recently stated it plans to continue cementing its position as the preferred carrier on key Eastern European routes. But Mr Albrecht has signalled the carrier may cease operations to less popular destinations in the region. Such capacity cuts would be in favour of more long-haul services.

Austrian is the dominant carrier at Vienna International Airport, offering just over half the available seat capacity. However the airline’s share of movements over peak times (between 6:00am-9:00am and 4:30pm-7:30pm) is only 20%. NIKI, airberlin, Lufthansa and KLM also have significant shares of the Vienna market. 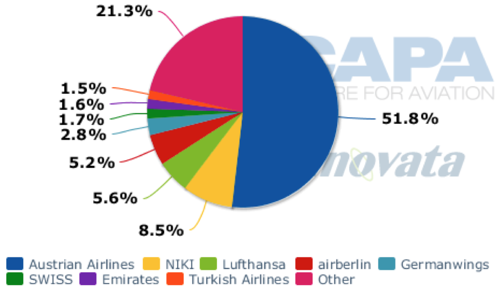 Austrian is looking for ways to reduce costs at its base at Vienna with Mr Albrecht calling for local aviation authorities and Vienna International Airport to consider reducing charges as the carrier attempts to reduce costs. He believes the airport is too expensive compared to competitor airports while strong competition is placing immense pressure on fares from the Austrian capital. Austrian also plans to renegotiate fees with ANSP Austro Control and other suppliers.

Austrian’s EUR200 million (USD255 million) in projected annual cost savings are planned to come from fleet, staff and network changes. The airline believes it needs assistance from both internal sources (i.e. staff) and externally (i.e. Vienna International Airport) in order to turn the carrier around.

With fare levels decreasing yet fuel expenses increasing, the airline, like many, is no longer receiving the yield margins it has in previous years, meaning unprofitable routes are no longer able to be compensated in part by more profitable services. However, Mr Albrecht told CAPA last month that Austrian is not planning to reduce system-wide capacity. Capacity in 2012 is expected to be flat, as frequencies on profitable routes are increased to offset reductions in capacity on unprofitable routes (including the cancellation of some routes). Bucharest, Belgrade and Sofia are already set to see increased frequencies with the implementation of the airline’s summer 2012 schedule.

Further savings will be achieved as Austrian streamlines the leisure sales activities of Lauda Air and Austrian while keeping the Lauda Air brand. Corporate sales will be developed further with the Lufthansa Group. 2012 will also see the implementation of a new revenue management system aimed at helping Austrian become more reactive and flexible in the face of increased competition.

The carrier recently revealed plans to replace its 11 Boeing 737s with up to seven A319 or A320 aircraft, resulting in a streamlined narrowbody fleet consisting only of Airbus aircraft. The airline stated it would not be able to fund the acquisition of aircraft itself, leading to Lufthansa stating that it is “prepared to support Austrian Airlines in this but only under the precondition that Austrian has significantly improved its cost structure first".

Austrian’s current short- and medium-haul fleet consists of 11 Boeing 737s, seven A319s, nine A320s and six A321s. The additional A319s would likely come from Lufthansa, which has 27 A320 and 25 A320neos on order. Fleet modernisation and harmonisation will allow Austrian to reduce its maintenance, operational and training costs.

Staff contracts are also expected to change in the near future. The airline has 5,800 full time employees, but its staff cost is the same as it was in 2009 - when it had a workforce of 7,300. According to the airline’s original plans for 2012, workforce expenses were to increase by 7% from 2011 to 2012 alone due to automatic salary increases and annual inflation adjustments. Staff, however, are promising to dig their heels in against “another savings package,” so there could be stormy times ahead.

Austrian to increase integration with Lufthansa

Mr Albrecht also told CAPA he plans to deepen the integration of Austrian into the Lufthansa Group and will look for more synergies between the airlines. Austrian was acquired by Austrian three years ago but Mr Albrecht says synergies were only partly explored following the initial acquisition. “It is a process,” he says, pointing out that Lufthansa had a lot on its plate as the group also acquired bmi, Brussels Airlines and Swiss. “For Lufthansa it’s a big undertaking. They have progressed very nicely. But there’s always a surge for more creativity, for more profitability.”

As part of the effort to deepen the integration with Lufthansa, Austrian is extending its cooperation agreement with Lufthansa’s low-cost subsidiary Germanwings at Vienna. Integration of this kind should allow the Austrian to make better use of the advantages of the Lufthansa Group’s different business models. Germanwings is the fifth largest carrier at Vienna with a 3% share of international capacity. Lufthansa itself is Vienna’s third largest carrier (and the largest foreign carrier) with a 6% capacity share. The combination of Lufthansa, Germanwings and Austrian give the Lufthansa Group control of over 60% of the Vienna market.

As Austrian looks to become more deeply integrated with Lufthansa, Austrian may become a more important component in the group’s Eastern European strategy, with Vienna as the gateway into Eastern Europe. Austrian already operates a large number of Eastern European services, so combined with its extensive Western European and Asian networks (as well as those of other Lufthansa Group carriers feeding into Vienna), Austrian should become the Group’s preferred Western link into the East. This is a role that Austrian, Vienna Airport and the Austrian government are keen to promote. If there is any hint of downgrading this role it will likely quickly become a source of friction.

Other key threats to Austrian in 2012: the EU ETS, airberlin, NIKI

Besides the economic challenges confronting all European carriers in 2012, a number of other threats will be playing in the minds of management, such as the European Union’s Emissions Trading Scheme. Parent Lufthansa expects to incur in 2012 EUR130 million (USD167 million) in expenses as a result of the new tax.

Austrian will also need to address the threat of increased competition, especially from airberlin-NIKI. The takeover of Austrian hybrid low-cost carrier NIKI by Air Berlin in Nov-2011 was presumed to be partly driven by airberlin’s wish to exploit Vienna’s position as a gateway into Eastern Europe. This would encroach on a number of routes where Austrian is currently the sole operator.

Another concern for Austrian is Lufthansa’s current focus on its core business. It has already disposed of its under-performing British and Italian units (bmi is in the process of being sold to IAG and Lufthansa Italia was shut down in Oct-2011) and this tough stance towards its subsidiaries may be worrying to Austrian. But Austrian is still the flag carrier of Austria and borders Germany. bmi and Lufthansa Italia were purely secondary carriers and did not have the prestige of being a national airline. As a result, Austrian is likely to remain an important asset to the Lufthansa Group.

Lufthansa group will push to ensure a more competitive Austrian

Austrian Airlines’ restructuring programme is set to significantly change the carrier’s structure, allowing it to move into a new era where it is better positioned to react to increased competition at its Vienna base. It has little choice. Lufthansa has made it clear that the Austrian flag will need to be much leaner if it is to play a significant role in the group’s activities.

With a grim outlook for European traffic this year, there will be little sympathy for inefficiencies – and little tolerance for any part of the Lufthansa Group that does not pull its weight. The first reaction of Austrian’s staff is to resist further change. So Mr Albrecht will not be expecting his new role to be a sinecure.