Small steps by the US to increase visa processing capacity for Brazil and China are the result of a campaign by the country’s travel and tourism advisory board to enrich understanding about the economic repercussions of failing to bolster efforts to increase the annual number of visitors from those countries. If those initial moves to strengthen visa processing capacity are successful, more initiatives could follow to capitalise on the economic benefits in opening travel to more visitors from Brazil and China to the US. Airlines already entrenched in those markets stand to increase traffic from those countries if travel restrictions are further loosened.

US Government working to expedite visas

The administration of US President Barack Obama earlier this year unveiled a sweeping initiative to increase travel and tourism to the US that includes assigning the Departments of State and Homeland Security with three tasks to the visa acquisition process: increase non-immigrant visa processing capacity in China and Brazil by 40% in 2012; ensure 80% of non-immigrant visa applicants are interviewed within three weeks of receipt of an application; and increase efforts to expand the country’s Visa Waiver Programme and travel by nationals eligible to participate in the programme.

In formal recommendations issued in 2011, the US Travel and Tourism Advisory Board – a group of executives from the travel and tourism industries appointed by the Commerce Secretary to advise the Government on current and emerging issues in the travel and tourism business – stressed the need for visa processing reform for the economic powerhouses of Brazil and China.

The US Government has calculated that in 2010 Brazil was the fifth largest international market for US travel and tourism-related exports, with visitors from the country spending USD5.9 billion on US travel-related goods and services, which is a 30% increase from 2009. Visitors arriving from China to the US grew 52% year-over-year in 2010 and jumped 644% from the 157,000 arriving in 2003.

Members of the board stressed the US has lost a third of is long-haul tourism market share in the last 10 years from 25.9 million in 2000 to 23.8 million in 2009. The board admitted that while some of the lost market share can be attributed to competition from an increasingly diverse set of countries, “it is striking that most of the market share loss happened in the 2001-2 time frame, coinciding with heightened security concerns by the US." 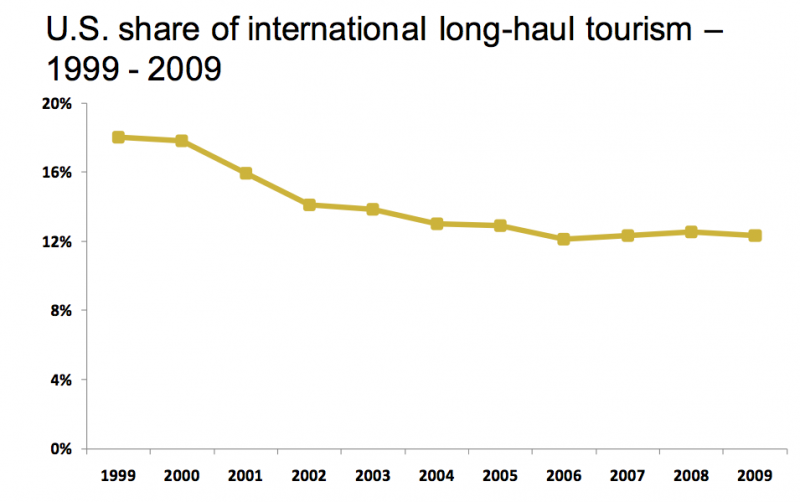 Source: US Travel and Tourism Advisory Board

Particularly noteworthy to the board was the lost ground by the US in the travel and tourism business among the BRIC (Brazil, Russia, India and China) countries. The board highlighted the number of annual visits from China to Europe is around 3 million versus 500,000 for the US, and pointed out the lacklustre performance in the BRIC countries is particularly troubling since the GDP of those regions is expected to represent 20% of the world’s GDP in 2014 versus 15% in 2009 and 7% in 1999. 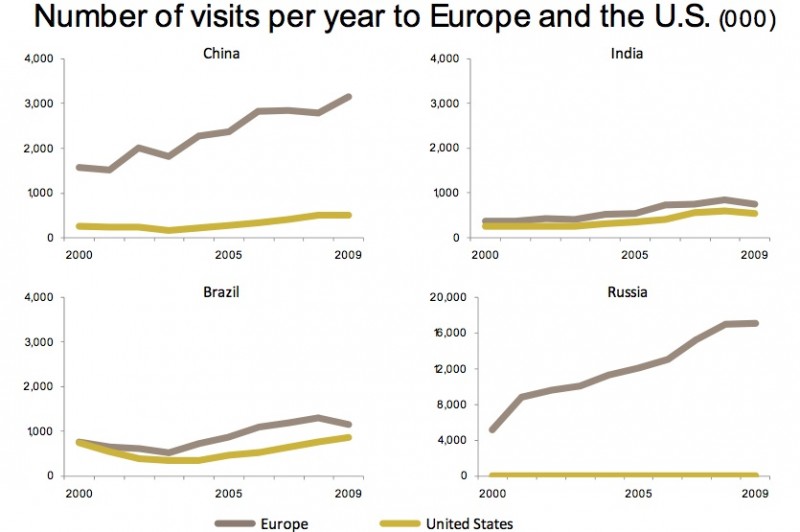 Source: US Travel and Tourism Advisory Board

But in attempting to gain a visa for travel to the US, a Brazilian citizen must make an appointment at one of four US visa processing centres and wait several months for that appointment. The process often results in Brazilian citizens having to sometimes make long journeys to visa administration centres. The board estimated a cost of USD2600 for a family of four to travel from Manaus in the country’s northern region to Brasilia, located in the central-western portion of the country, to make their visa appointments.

The travel advisory group also pointed out a Chinese citizen aiming to travel to the US needs to wait several weeks to have an appointment for a required in-person interview, compared with five to 12 calendar days for travel to a European country.

Estimated current processing time for US visas: Jul-2010 vs Oct-2010 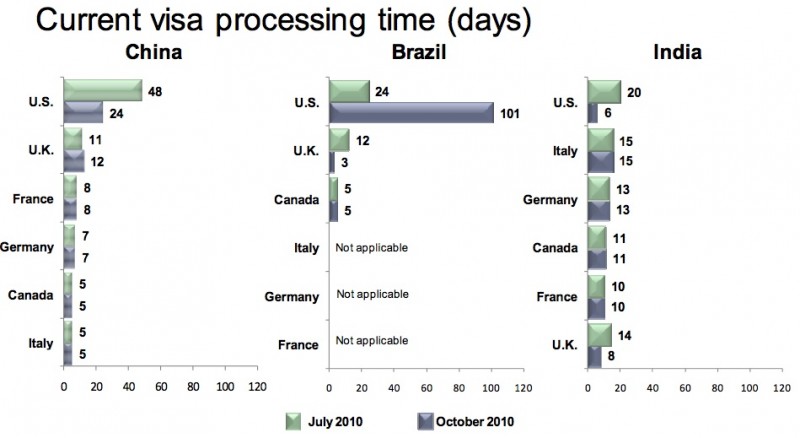 Source: US Travel and Tourism Board

Members of the board have pressed the US Government to increase the number of processing locations in Brazil, China and India, and recommended adding four to six centres in each country. The board cited “an aggravating” factor in China, where the US only has visa processing centres in five cities compared with 12 for the UK. “As a result there are 10 cities in China with more than 2 million urban inhabitants who do not have a visa processing centre,” said the advisory board. Based on size and economic importance, the group recommended Chongqing, Dalian, Shenzhen, Tianjin and Wuhan as priority locations for new processing centres.

US visa processing centres in Brazil, China and India 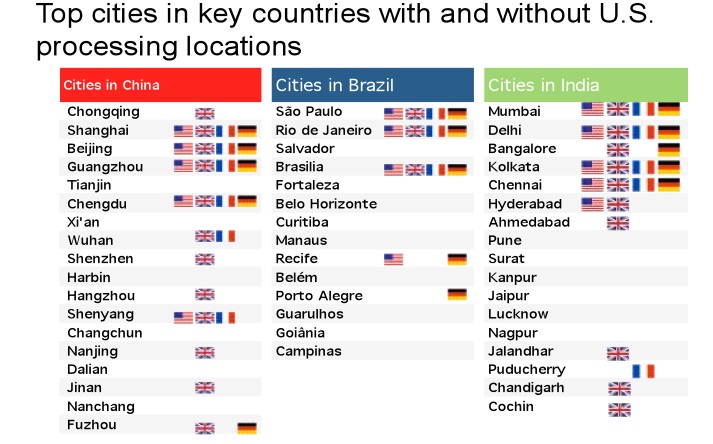 Source: US Travel and Tourism Board

The board did cite progress on some of its recommendations, noting that consular staff has nearly doubled in Brazil, China and India and two new processing centers are scheduled to be opened in China during fiscal 2013.

While US-Chinese air links are primarily to Beijing and Shanghai, China has been encouraging development of second-tier cities and under its current Five Year Plan is targeting growth in central/western Chinese cities like Chengdu and Chongqing. Sichuan Airlines, based in Chengdu, plans to launch its first long-haul flights this year to Melbourne, Australia and Vancouver, Canada (the latter from a hub in northern China). European carriers are already acquainted with having services to China's secondary cities: Finnair in May-2012 will launch services to Chongqing while Air France last week announced intentions to serve Wuhan.

There is enormous potential for China-US traffic to grow. The Northern Hemisphere summer 2012 schedule will offer 44,000 weekly seats between mainland China and the US, but 116,000 weekly seats between the US and Japan – nearly triple the amount to China. The lack of service between China and the US, let alone to secondary Chinese points, is not a direct fault of airlines. Market access remains tightly controlled; specific routes are awarded to airlines. Lack of further liberalisation is partially the result of Chinese authorities fearing US carriers can grow faster than Chinese carriers. Reasons are varied, but if Chinese nationals were able to more quickly and easily secure a US visa, Chinese carriers would likely have more confidence in growing the US market, and the Government in turn would promote further liberalisation.

In comparison, France, Germany, Netherlands and the UK – countries with more relaxed visa procedures – have a higher proportion of seats to China relative to their population than the US does. (Almost all passengers on China-US services originate or make their final destination in the US whereas a considerable number of passengers on China-European services originate in or make another European country their final destination. But with UK passengers taking Chinese flights from Amsterdam or French nationals going through London, the transfer traffic begins to balance out.)

The clearest indication for potential of China-US traffic is to look at US traffic to the more relaxed and liberalised Hong Kong. Even though its nationals are not eligible to partake in the US Visa Waiver Program, this summer season there will be 29,842 seats between Hong Kong and the US, although two-thirds is supplied by Cathay Pacific and its extensive sixth-freedom network (but mainland carriers are now building their own sixth freedom networks). Hong Kong has two-thirds the seats to the US as does mainland China despite Hong Kong having a population of 7 million to China's 1.3 billion. (Hong Kong's GDP PPP typically ranks in the world's top 10 while China hovers around 90th place.)

More tellingly, United Airlines this summer will operate 7154 seats between Hong Kong and the US, with almost all traffic O&D, unlike with Cathay Pacific. Yet United's seats to the much larger China are only slightly double, with 16,744 seats.

For Brazilian traffic, the US in some instances still sees disproportionately less traffic than some European peers despite the US being considerably closer than Europe. France, the Netherlands, Portugal and Spain have higher proportions of traffic, although Portugal and Spain have closer cultural and historical ties. Still, the US has a geographical advantage that should lend to a higher share of seats (unlike in China, where the US and Europe are more equidistant).

Data from the US Government show 49% of Brazilian travellers arriving in the US during 2010 visited New York City. The benefactors from any increase in tourism would certainly be Brazil’s TAM, which accounts for roughly 47% of the seat share in the market, and American Airlines with a share of roughly 27%. 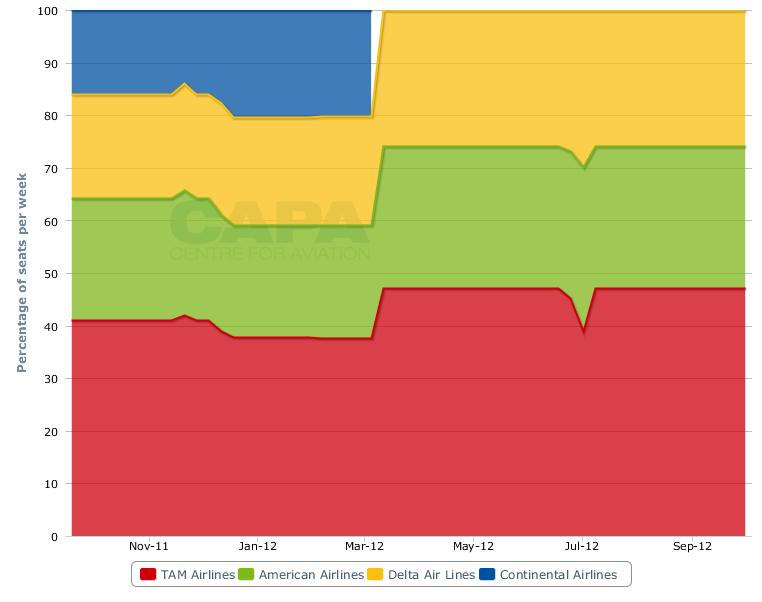 Even as American has made network cuts during its bankruptcy process, it remains the number one carrier from the US to Latin America, and continues to build up its presence in Brazil with new flights from Miami to Manaus, and is adding capacity from Dallas to Sao Paulo and Miami-Belo Horizonte. American would be a significant beneficiary from increased tourism volumes between Brazil and the US.

TAM is also in the process of building up its US network.

During 2010, 49% of Chinese travellers to the US visited the state of California as San Francisco and Los Angeles are the two gateways in the state for Asian travellers visiting the country. United and Air China would benefit significantly from more Chinese travellers to the US. On the San Francisco-Beijing pairing, United has 55% of the current seat share while Star Alliance partner Air China accounts for the remaining 45%. United has 100% of the seat share from San Francisco to Shanghai. From the second US gateway to China from the US west coast Los Angles, Air China accounts for 100% of the seats to Beijing while China Southern is the only carrier on the LA-Guangzhou route. Three carriers offer flights in the Los Angeles-Shanghai market, with China Eastern holding 38% of the seat share, followed by United at 32% and American with a 30% share. 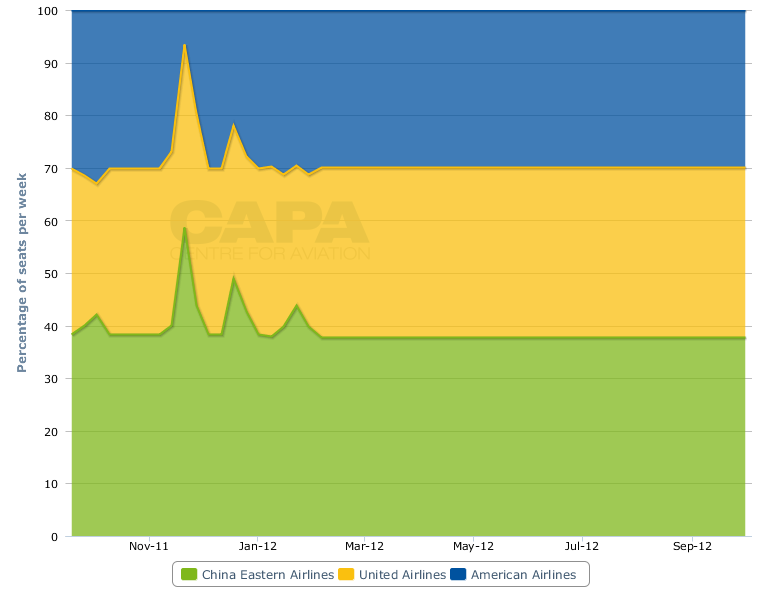 Pressure will likely continue on the US Government to increase visa throughput for Brazil and China as trade group Airlines For America (A4A) has stressed the tedious process travellers endure to obtain visas places the US at a competitive disadvantage. The association has included visa reform as a talking point in its broader push for a national airline policy.

The travel advisory board also is likely to keep pushing improved efficiency for citizens from Brazil and China in gaining travel visas. “The middle-class of China and India will soon reach several hundred million individuals with a purchasing power comparable to that of the developed countries, many of whom are and will be eager to travel internationally,” the group stressed to the US Government. “This represents a dual opportunity for the United States: the opportunity to sell US products and services to these countries; and the opportunity to attract visitors from these countries who are interested in visiting the United States as tourists or as business people. It is critical that the US does not miss this opportunity.”