Costly new regulations imposed by the US government designed to protect consumers and a spate of looming new taxes have galvanised the country’s airlines to launch a full-scale campaign to communicate the urgency surrounding the need to create a national airline policy. The stakes are incredibly high as some of the proposed taxes could hike the industry’s costs by USD36 billion over the next decade, and the heavy hand of government regulation ushers in new rules that could also add billions of dollars in compliance expenses for US carriers that are working tirelessly to prove their nascent profitability has staying power.

US industry trade group Airlines For America (A4A) started its campaign to convince government of the necessity for a national airline policy in late 2011 as the administration of US President Barack Obama proposed a USD100 tax on every flight and a tripling of the security taxes over a five year period.

Airlines escaped having those taxes imposed last year after a US Congressional Supercommittee failed to reach consensus on a deficit reduction package. But now A4A president Nick Calio is warning that the tax proposals on airlines have been revived in the Obama administration’s fiscal 2013 budget, and US Congressman Paul Ryan is considering a doubling of the current security fee for every segment flown.

Taxes collected from US carriers in 2011 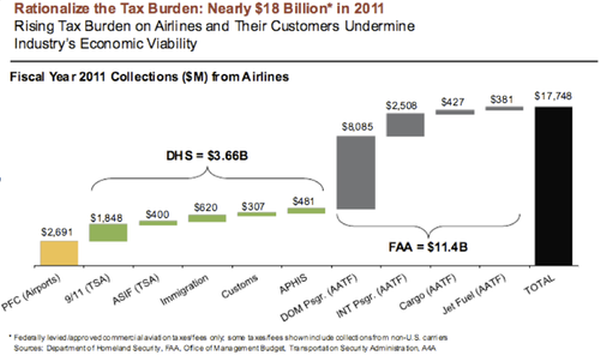 Mr Calio warns the resurgence of the new taxes in the White House’s budget proposal would increase costs for US carriers by USD36 billion over 10 years. He stresses that increase is against a backdrop of US carriers recording an average profit margin of only 0.3% in 2011 (see Background Information).

The USD2.7 billion profit recorded in 2010, which is viewed as a favourable performance, is USD900 million lower than the USD3.6 billion carriers would pay annually under the administration’s proposed tax scheme. Those taxes would fall on top of a USD18 billion in taxes the US airline industry paid in 2011, as the airlines through the A4A contend taxes on commercial aviation in the country are 17%, which is higher than so-called sin taxes on alcohol and tobacco. 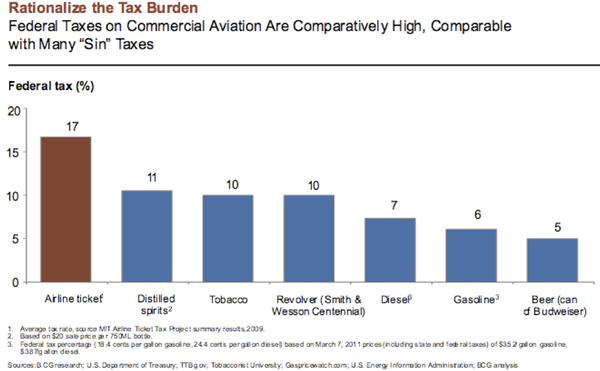 Independent think tank the American Aviation Institute (AAI) in a report released in late 2011 examining the taxation and regulation on the US airline industry, estimated a USD100 per departure tax was equal to 20% of American Airlines’ operating income per flight in 2010. American is in the midst of a Chapter 11 restructuring aimed at achieving a cost structure similar to its US legacy rivals.

AAI calculated that airlines pay an average of USD59 per ticket sold in taxes across domestic and international flights, which suppresses tourism and business travel resulting from higher fares and lower airline capacity. The group calculated that a USD10 reduction in federal taxes on airline tickets would benefit local US economies by USD13 billion annually.

Recently IATA CEO and director general Tony Tyler weighed on the Obama administration’s proposed tax hike, arguing much of the funds collected from the increased taxes would be used to balance the US budget or decrease the country’s deficit. “That won’t simulate air travel or economic activity,” warned Mr Tyler. He also remarked that “the best way to kill an industry is to over-regulate and over-tax it”.

Mr Tyler was referring to a spate of new airline regulations rolled out by the US government since 2009 that largely are designed as consumer protection mechanisms. Under Transportation Secretary Ray LaHood, the US Department of Transportation has aggressively moved to roll-out a series of rules designed to protect passenger rights.

Two of the new passenger protection rules have been rolled out during the last couple of years. The first in 2010 was a new tarmac delay regulation that prohibits airlines from keeping aircraft on the tarmac for more than three hours, with exceptions allowed for safety or security. Foreign carriers operating flights to and from the US were folded into the rule in August of last year. Carriers face a USD27,500 fine per passenger if they violate the rule. To avoid fines carriers are opting to cancel flights, which creates disruptions throughout an airline’s entire network. AAI research showed that the on-board delays rules instituted two years ago triggered a 42% increase in bad-weather flight cancellations.

The second rule has sparked strong controversy within the industry specific to its requirement that all government taxes and fees must be included in airfares advertised by airlines. A4A contends the rule is actually disingenuous to consumers, since the government is essentially “hiding the ball” and not held accountable for the taxes it imposes. It also allows the government to raise taxes included in fares without consumer knowledge.

Other elements contained within the second rule are a requirement for carriers to hold or refund tickets for 24 hours, which ties up valuable inventory, the prohibition of post-purchase price increases, a 30 minute requirement for customer notification of flight changes, new fee disclosure on baggage charges in e-tickets and increases in denied boarding compensation.

AAI points out the new requirements on post-purchase price increases also prohibit increases on ancillary products offered to a consumer at the time of sale, even if customers opt not to purchase those products when they purchase tickets. The organisation questions that if suppliers of ancillary products such as cars and hotels raise their prices before a passenger’s departure, “is the airline bound to the price offered during ticketing?”

Compliance costs for the second rule designed to protect consumers is estimated by AAI at USD14.8 billion for the 10-year period spanning 2011 to 2021 as carriers must ensure they have the necessary technology in place to comply with the regulations.

Projected compliance costs of new consumer rules for US carriers

Spirit Airlines and Allegiant Air last year filed litigation against the sound round of consumer protection rules, charging they violated the first amendment of the US constitution outlining the right to free speech. Their request to stay the rule was denied and now all carriers are moving forward with compliance as the lawsuit remained tied up in the US courts.

US Airlines face a potential third rule that would require carriers to report revenue collected from 19 separate items, including meals, drinks and upgrades. Airlines would be mandated to make those products available through the global distribution systems. If the latest proposal is pushed through, carriers could face taxes on their ancillary products, which are a significant source of revenue for all airlines. A draft of the proposed rule could be issued during the second half of the year.

The prospect of both increased tax and regulatory burdens led the A4A to concludes its overarching strategy is the pursuit of a national airline policy in the US. It has delivered a proposal to the US DoT upheld by five pillars - tax reform, regulatory reform, infrastructure improvement through the development of the NextGen air traffic control, the mitigation of fuel costs volatility and the creation of policies that ensure US carriers will remain competitive in the international market place.

A4A reiterates previous arguments that governments in other countries, especially in emerging markets, seek to promote aviation through favourable tax and regulatory policies. They’ve also raised the issue that the US Ex-Im Bank is helping to foster their growth by giving low interest loans to airlines in those countries for the purchase Boeing aircraft.

Delta Air Lines has been the most vocal, and believes all export financing for Boeing and Airbus widebody jets should eventually be eliminated. Legislation was recently introduced by Congressional Republicans to only extend the Ex-Im Bank’s charter through 2013 after the current charter expires in May of this year. There is also a dispute within the Congress over the credit ceiling for the bank, with some members seeking a USD113 billion cap and others aiming for a USD140 billion dollar ceiling. 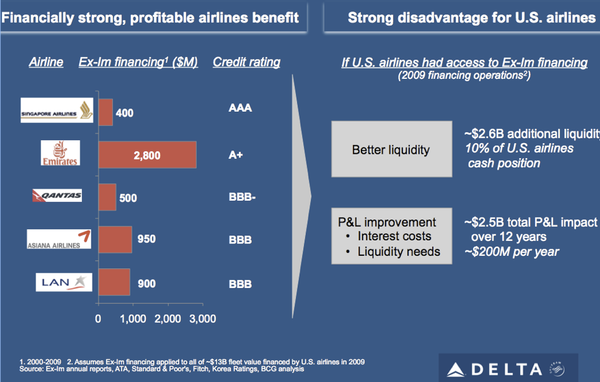 A4A has folded its push for the Commodities Future Trading Commission to honour its mandate to curb excessive speculation in the oil futures market into its national airline policy proposal, arguing every one dollar increase in the price of crude oil per barrel leads to an annual cost increase of USD415 million for US carriers. In making its case for NextGen acceleration the A4A concludes the consequences of flight delays and cancellations caused by the current system could reach USD31.2 billion annually.

Using the railroad industry as a blueprint

A4A believes the Staggers Rail Act introduced in 1980 that deregulated the US railroad industry could be a model for the national airline policy it believes is crucial for the airline industry.

Improvement in railroad industry ROIC after introduction of the Staggers Act 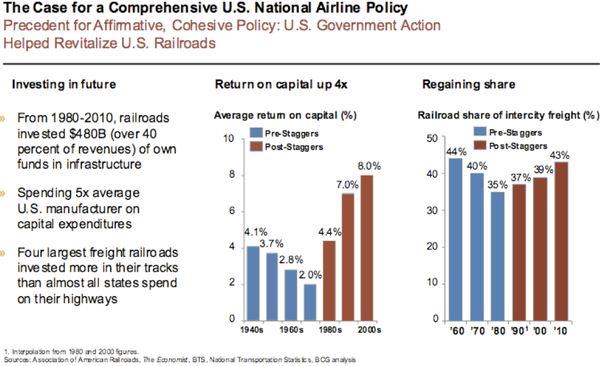 Even though the Airline Deregulation Act was introduced in 1978 two years prior to the Staggers act, A4A concludes “commercial aviation is the most highly regulated, supposedly deregulated, industry in America”, says Mr Calio.

Through the loosening of US government’s grip on the railroad industry, companies were able to make the necessary investments to improve their profitability, and improve their return on invested capital from 4.4% in the 1980s to 8% in the 2000s. Delta in late 2011 also used the railroad industry as an example, noting the government reforms ushered into that industry ended discriminatory taxes and improved merger procedures.

It is virtually impossible to predict whether A4A will succeed in its efforts to convince the US government that reforming taxation and regulation of the country’s airline industry is critical as its airlines eked out profits during the last two years after bleeding roughly USD55 billion during the previous decade. A4A acknowledges its policy proposal requires a great deal of work, and unified engagement with Congress and the Obama administration to achieve its goals.

An election year in the US compounds the uncertainty as reform could be pushed back to focus on more pertinent issues of the populace like the economy and health care reform. But one certainty that remains is Mr LaHood is unrelenting in his consumer rights agenda, and has indicated there is likely more to come in his passenger protection campaign, which could create more compliance havoc for carriers already bogged down in working to ensure they are abiding by the first two set of rules. 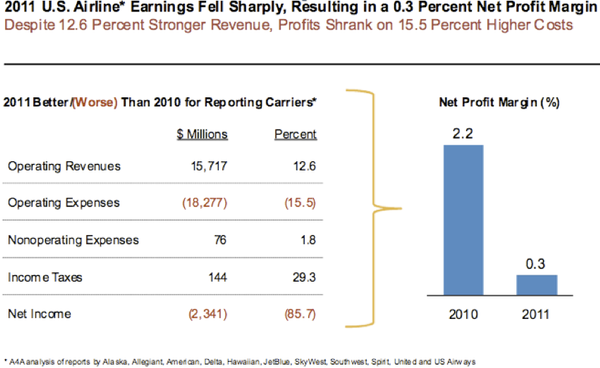