Every aviation group came out foursquare against the aviation tax hikes proposed as part of President Barack Obama’s deficit reduction packages. The plan would raise the passenger security fee from USD5-10 per return trip to USD15 by 2017 and give the Homeland Security Department the right to revise it upward. Obama's plan would also impose a surcharge of USD100 per flight to help pay for air traffic control. Airlines argue the move runs counter to measures the administration should be taking to promote aviation since it is a proven economic driver contributing 12-15 jobs for every airline job produced. The argue it implies airlines cannot be part of the recovery plan for increased hiring.

US job impact (in millions) by aviation activity 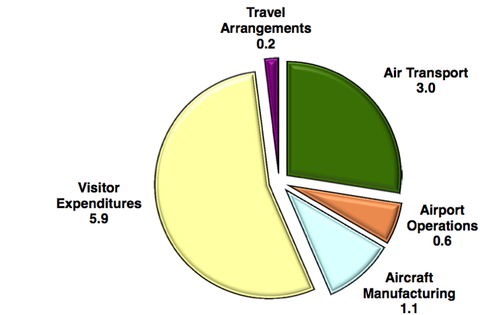 Ironically, airline employment was only just beginning to stabilise this year, but that progress could be threatened if the proposals go through.

Clearly, industry pleas to lower taxes have fallen on deaf ears in Washington, despite the heavy talent hired by the Air Transport Association earlier this year. However, since the Federal Government has switched increasing income taxes to imposing fees in order to raise revenues over the last 50 years, the new taxes are the least politically painful way to address the deficit. Ironically, this is a similar approach to that of the airlines themselves and their ancillary fees.

The USD100 per flight tax on each departure would apply regardless of aircraft size, which threatens to compromise the gains airlines have made in the last two years through ancillary fees and cost and capacity cuts. This tax would also be imposed on departures for aircraft with as few as nine passengers.

Ironically, the USD100 per flight would go to fund air traffic control, which is currently funded by a substantial ticket tax paid by passengers. Even so, it would not guarantee deployment of the NextGen air transportation systems which has been stalled by problems. It is expected to raise USD11 billion during the decade for the Airport and Airway Trust Fund.

Increasing aviation taxes was already proposed by Congress during its debt-reduction deliberations this summer. The industry urged legislators to drop the plans, saying the increases would slow recovery, further burdening passengers and cost jobs.

“The industry already pays more than its fair share of taxes – more than alcohol and tobacco, products that are taxed at levels to discourage their use”, said ATA President Nick Calio at the time. “Today on a typical USD300 round-trip ticket, passengers already pay USD63 in taxes and fees.”

“No other industry or mode of transportation pays for its security as airlines do, even though it is clear that the terrorists targeting commercial aircraft are not attacking the airlines themselves but rather the US economy and our way of life,” Mr Calio said. “This is absolutely unacceptable; we should advance a tax policy that encourages air service to grow, not contract. Airlines are critical to the nation’s economic health. Since 9/11, the US airline industry has lost USD55 billion and 160,000 jobs – over a third of its workforce. Adding to that burden is not ‘reform,’ it is a jobs eliminator.”

Regional earnings could be wiped out

For regional airlines, the USD100 fee per departure would likely be more than all of the profits the industry earned last year, imposing a further challenge on an already challenged industry in the middle of restructuring as a result of changes at their mainline partners.

The Regional Airline Association (RAA) said the two new taxes would combine to add nearly USD900 million in new taxes – USD408 million on passengers and USD475 million on airlines in just the first year. It is also likely to further exacerbate the capacity cuts already imposed in the post-Labor Day period. In addition, RAA indicated the taxes would likely cause the complete elimination of air service at hundreds of small- and medium-sized communities in addition to forcing more airline furloughs.

"The context and math here is pretty easy to understand”, said RAA President Roger Cohen. “Our nation's debt crisis will be worsened, not solved, by eliminating air service and jobs across the nation.”

Airlines are not the target

The industry has opposed per-passenger security taxes saying they should come out of the national defence and security budgets.

“Airlines and their passengers are being asked to pay for national security, although it clearly is a responsibility of government,” said IATA Director General and CEO Tony Tyler, who pointed to a similar tax in the Netherlands which cost the economy more than it raised in revenues. “This is absolutely the wrong approach. Aviation is a catalyst for growth in the worldwide economy. The economic outlook is uncertain and confidence among both businesses and consumers is low. Making air travel progressively more expensive is not a sound economic strategy.”

The hikes include tripling the USD2.50 9/11 passenger security fee per flight now and then continuing its increase by USD0.50 cents per year between 2013 and 2017. This would mean the security fee would rise from the current USD2.50 to 7.50 by 2017 or USD30 per round trip assuming two segments each way. More than half of the increased security fee would be diverted to raise revenues for the general treasury fund and would not be used to improve security.

Groups are also active in trying to reform the entire aviation security funding structure to more accurately reflect the actual cost of aviation security. Originally imposed in 2001, the Aviation Passenger Security Fee was originally intended to recover the full costs of aviation security. But the current USD5.00 per one-way trip (two segments) only recovers 43% of costs, says the Government, owing to cost escalation in the ensuing years. Even so, this does not address the issue that aviation is the only mode needed to self-fund security. Indeed, aviation is the only mode that must self-fund its infrastructure as well.

Mr Calio also said the proposal would give another advantage to foreign competitors. “We should advance a tax policy that encourages air service to grow, not contract,” he said. “Airlines are critical to the nation’s economic health. Commercial aviation drives more than USD1 trillion in economic activity and more than 5% of US gross domestic product each year – and is responsible for more than 10 million jobs. Every 100 airline jobs support about 388 jobs outside of the industry.”

The new security tax would raise USD8.8 billion over five years and USD24.9 billion over a decade. The White House said the first USD15 billion would go to the general treasury for deficit reduction with the balance going to the Transportation Security Administration’s discretionary appropriations.

It is well known security hassles and rising fees have forced many passengers into their cars and the increased taxes proposed by the administration is likely to exacerbate the situation. Aviation taxes on airline passengers range from between USD16 billion at the bottom of the business cycle to USD20 billion at the top.

Washington would also end special depreciation for corporate aircraft purchases which has fuelled job recovery for an industry flattened at the outset of the recession on withering criticism from Washington. Many built in the US, business and general aviation aircraft supports hundreds of thousands of Main Street jobs making it the quintessential nexus between Wall Street and Main Street. The loss of the special depreciation is likely to cost jobs again.

The administration also said the USD100 per departure fee will provide more equitable funding for air traffic services. This argument has been advanced by the airline industry, which said business and general aviation did not pay their fair share. However, the air traffic system is designed and run for maximum throughput which means prioritising on airline flights. Airlines, however, say all flights, no matter the size of the aircraft require the same air traffic services.

Should these proposals pass, business aircraft will have the same depreciation schedule as airline aircraft at seven years. It is expected to raise USD1.84 billion over five years and USD4.65 billion over 10 years. The additional revenue, stemming from reduced tax deductions, will be used for deficit reduction.

The general and corporate aviation groups all opposed the provision, saying in a joint statement, “We believe this per-flight tax not only imposes a significant new administrative burden on general aviation operators who currently pay through an efficient per-gallon fuel charge at the pump, but it will also necessitates the creation of a costly new federal collection bureaucracy.”

Both chambers of Congress have passed bills that endorse the per-gallon fuel charges rather than adopt a per-flight tax similar to that proposed, they said, noting a letter sent by 116 members of the House urged the President to drop proposals for new aviation charges.

They threatened such a proposal would be dead on arrival on Capitol Hill. However, House efforts may fall to political expediency after it hyped the debt issue last summer which only served to dampen consumer confidence. Aviation has never been high on the agenda in Washington. The groups also noted the devastating impact of per-flight fees in other countries that have imposed them.