After many years of waiting for Asian service, Boston Logan International Airport will see two Asian services this year after China Eastern Airlines announced it will open a daily Beijing-Shanghai route from 01-Jun-2012. The route launch follows recent CAAC approval. While Japan Airlines (JAL) will be the first Asian carrier to serve Boston, with a Boeing 787 service to commence on 22-Apr-2012, it is worth contemplating the speed with which China Eastern can launch its route compared to JAL. While JAL has had open access to Boston for many years, the Beijing-Boston route authority had been sitting idle since being granted to Hainan Airlines/Grand China Air in 2006. China Eastern’s approval for the route indicates Hainan has lost the route authority.

China Eastern is expected to take up the capacity in the short-term, reflecting the underlying strong potential of the China-US market, as well as the increased agility Chinese carriers have compared to fellow North Asian carriers in Japan, Korea and Taiwan.

ANA and JAL are planning to open new US cities in the medium-term while Asiana is increasing frequencies. The China-US market remains heavily regulated, with authorities on each side approving specific routes for each carrier. There is scope for further growth and market liberalisation is a progressive goal, although the Chinese government is more hesitant, fearing the stronger US carriers that typically achieve higher load factors than Chinese carriers.

The Beijing-Boston growth comes as the larger North Asia-North America market expands, including Chinese carriers adding frequency and services in the US and Canada.

China Eastern is second largest Chinese carrier between US and China

China Eastern is the second largest Chinese and Asian carrier based on available seats and is also the second largest Chinese carrier operating between mainland China and the US. (The largest is Air China, the country's third-largest airline. China and Asia's largest carrier, China Southern, is the third-largest operator between China and the US.) China Eastern serves Los Angeles and New York JFK from its Shanghai hub. The Beijing-Boston route would be the carrier's first long-haul route from Beijing; Chinese carriers are typically relegated to operating flights from their hub. Air China's US services all originate in Beijing although Hainan operates a Beijing-Seattle service. China Southern's attempts to deploy its A380 from Beijing – an aircraft type Air China does not operate – have been met with significant government hurdles. 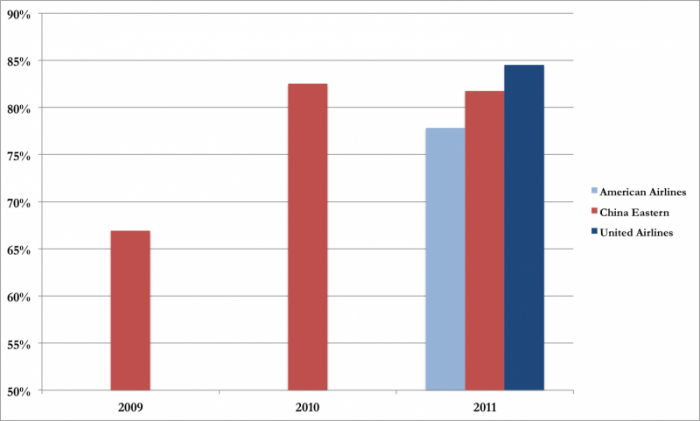 Source: CAPA – Centre for Aviation & US DoT
Note: 2011 data is through September only.

United also operates between New York and Shanghai with United's service (inherited from the Continental merger) serving Newark and China Eastern's serving New York JFK. As at Los Angeles, China Eastern's performance lags that of United. While specific yield information is not available, United can be expected to have better performance. Chinese carriers have a marginal cost advantage, although that advantage will grow in coming years as they become more efficient. 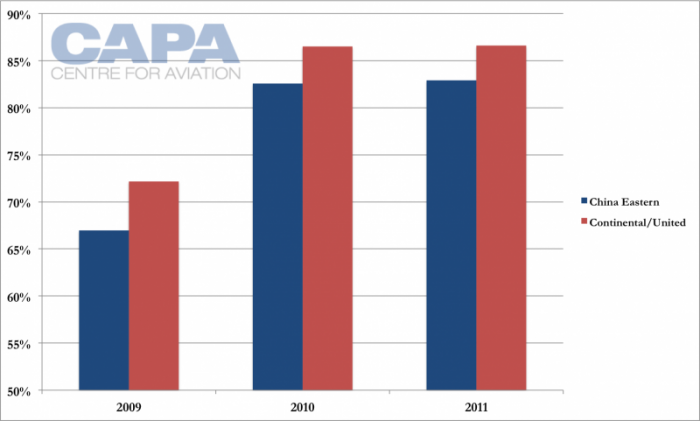 In Boston, JAL waited for 787 and anti-trust while China Eastern forges ahead

JAL cited the dual combination of the 787's efficiency as well as anti-trust immunity with alliance partner American Airlines as critical to allowing JAL to open its Boston service. China Eastern, however, will launch with neither of those advantages, underscoring the potential the carrier sees as well as how under-served the US-China market is. The Northern Hemisphere summer 2012 schedule offers 116,000 weekly seats between the US and Japan while only 44,000 weekly seats are offered between the US and mainland China.

While China Eastern's long-haul fleet is being fully utilised, it placed an order in Oct-2011 for 15 A330s (12 -200s and three -300s) due for delivery between 2013 and 2015, supplementing its existing A330 fleet. While the aircraft would not ordinarily reach Boston from Beijing, they could be used to allow China Eastern to shift capacity across its network, facilitating the launch of Boston services. At the same time as the A330 order, China Eastern cancelled its 787 order and announced plans to dispose of its A340-300s, which could either launch the route or facilitate movement of other aircraft.

United Airlines is the dominant carrier on US-China routes with a 39.5% capacity share. United is trailed by Star Alliance partner Air China with an 18.2% capacity share. Three US carriers and four Chinese carriers operate services between US cities and Chinese cities, with US carriers holding around 63% of the total weekly capacity, according to Innovata schedule data. 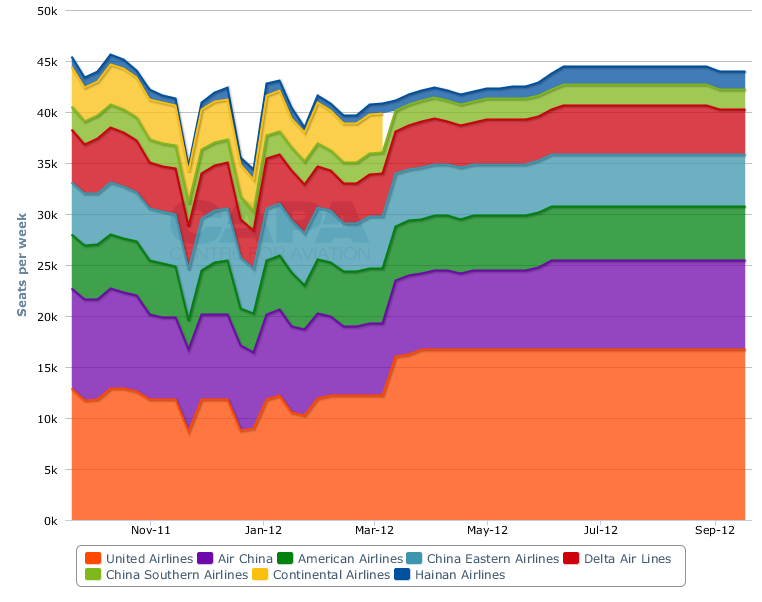 Service between the world's two largest aviation markets will continue to grow from a relatively small base in 2012 and beyond as airlines from both sides increase service as permitted by their governments. While market liberalisation is needed, also a limiting factor for traffic growth is the tight visa regime the US has implemented for Chinese nationals.

Passenger levels between the US and China have increased by almost 200% over the past decade, to a record 2.7 million annual passengers in 2010 (+30.5% year-on-year). Capacity constraints at China’s largest airports has also limited growth prospects. 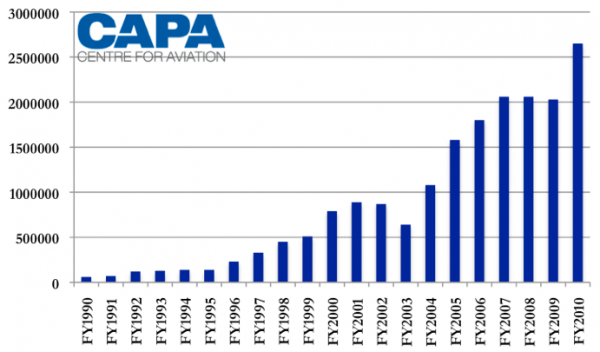 As a result, while the main gateways are likely to remain the focus of trans-Pacific services, subject to the availability of landing slots at conducive times, China's high potential second tier markets will come into the frame later this decade as the marker further opens, Chinese economic development spreads and aircraft types capable of serving thinner markets profitably enter the fleets of US airlines.

Despite moving some of its planned international capacity growth back into the domestic market, China Eastern Airlines’ North America capacity expansion is not limited to Boston. The carrier plans to increase Shanghai Pudong-Vancouver frequency from seven to 11 times weekly from 22-Jun-2012 to 10-Sep-2012. Services will be operated with A330-200 equipment. According to Innovata, Air Canada operates on the sector with daily frequency.

Vancouver is seeing an influx of Chinese capacity, with China Southern increasing Guangzhou-Vancouver frequency from three to five times weekly from 23-Jun-2012. The carrier launched the service on 15-Jun-2011 and as of 31-Jan-2012 has transported 44,000 passengers on the sector. The carrier has also signed a special prorate agreement with WestJet Airlines, allowing passengers on Guangzhou-Vancouver service to connect to WestJet’s 26 domestic services from Vancouver.

Hainan Airlines also plans to introduce a fourth weekly Beijing-Toronto frequency from 20-Jul-2012 through 07-Sep-2012 as part of efforts to expand its North America network to be more competitive on China-North America operations.

The carrier at present operates Beijing-Seattle and Beijing-Toronto services, with plans to increase Beijing-Seattle frequency to five times weekly between 14-May-2012 and 09-Jun-2012, increasing to seven times weekly between 10-Jun-2012 and 27-Oct-2012. According to Innovata, Hainan Airlines is the smallest of nine operators on services between China and North America with a 5% capacity share in the current week.

Sichuan Airlines is also planning to launch direct services to Vancouver in Apr-2012 as part of a route expansion which will also see the carrier launch services to Amsterdam and Frankfurt in Jul-2012 and to Melbourne in Sep-2012.