Thai Airways has stated average forward bookings for Apr-2010 are in the 40-50% range, lower than 50-60% at this stage in Apr-2009, as a result of the citizen protests, as bookings have fallen from Australia, China, Hong Kong, India, Japan, Singapore and South Korea. Thai AirAsia stated that some passengers have requested changing their services to other destinations during the protests, but added that it has not yet seen any cancellations.

Airbus stated it would delay its first A380 delivery to Korean Air (shares up 1.0% yesterday), due to production of the aircraft falling behind schedule. The South Korean airline is now scheduled to take delivery of its first A380 in 2Q2011, instead of Dec-2010 as previously planned. Airbus is hoping to deliver approximately 20 A380s in 2010 (twice as many as delivered in 2009), with three delivered as of 09-Mar-2010. Korean Air has ten A380 orders.

On the other end of the spectrum, shares in Skywest Airlines jumped 6.3%, as the carrier announced that it has leased an A320-200 from Aviation Plc, with the 36-month lease to help the carrier fulfil its requirements of higher-density mining charter contracts. 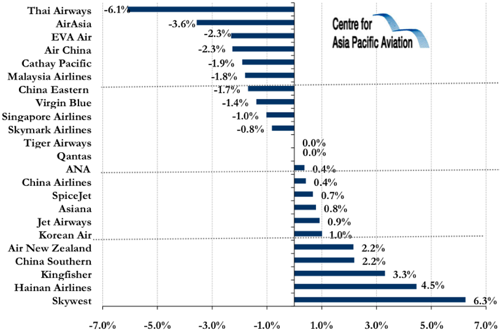