The less active half of the world in aviation terms, the southern hemisphere, is appropriately under-represented in the Airports Top 30. Only Sydney Airport ranks in that group. But this is set to change as Latin America starts to assert itself as a force for the 21st century. (Note: Jakarta of course also sits below the equator, so is technically also in the southern hemisphere, but Sydney is the only major airport deep in the hemisphere.)

Sydney remains the primary focus in the hemisphere, drawing from Johannesburg in the West to numerous South American cities to the East. Unlike multiple routing choices to the North, if you wish to circle the globe and stay in the Southern hemisphere, you will pass through Sydney.

Over the past decade, as sixth freedom operations proliferated with liberalisation, the number of legacy carriers operating direct services has diminished and Qantas has likewise cut its European reach. In 1999, Sydney remained a part of the route networks of KLM, Egyptair, Olympic. Alitalia, AOM, Gulf Air and Lauda. Qantas flew to London, Frankfurt, Rome and Paris. In 2011, all are gone save Qantas and BA to LHR (plus Virgin), Qantas to Frankfurt and two weekly flights operated to Paris by Air Austral, via Reunion (the carrier will operate the world's mostly densely configured A380 when it begins operation to Australia with it later this decade).

Filling the gulf - via the Gulf

However, that loss has been more than compensated by the arrival of Emirates and Etihad, both of which added Australia to their networks early on. Emirates for example operates double or triple widebody service daily into each major airport in Australia from the Gulf, as well as operating its A380s across to New Zealand from Sydney and Melbourne. Etihad is ramping up and its partnership with Virgin Australia appears certain to enhance its role. Qatar Airways currently only serves Melbourne on a daily basis, but with many aircraft on order and Australia's relatively relaxed access regime, Sydney is a likely addition from Doha as well.

There has also been an increase of service frequency via points in Asia. Here, significantly, there has also been substantial use of larger aircraft (A380s) and reduced services that combine/triangulate Sydney and Melbourne, so frequency increases understate their real growth.

Sydney's major tenant remains Qantas by a long way, reflecting its home base and the focus of most of its international services, along with holding a 65% domestic market share. 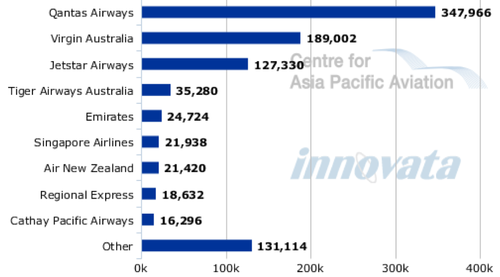 Qantas, as a brand, supplies 37% of the weekly seats from SYD but that rises to 51% if its partner Jetstar is included. 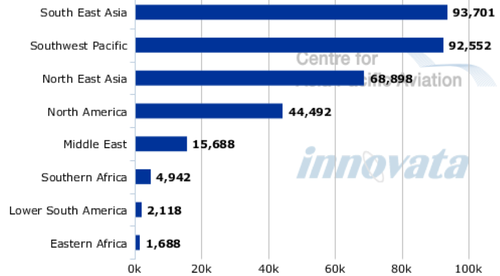 The chart showing international traffic by region provides further evidence of the way in which the airport’s service is distributed. Not only is there a significant local traffic offering to SE Asia, but the through flights to Europe (excepting Air Austral) all travel via Bangkok, Hong Kong or Singapore, adding to the point-to-point offers.

The next chart provides a more specific breakdown of the cities to which most of the traffic flows.

While Air New Zealand offers seats to a wider range of trans-Tasman destinations,  Singapore-Sydney has multiple A380 services, making for a great many seats. Still, Auckland tops the list of international destinations, aided by the Emirates' daily fifth freedom A380 operations.

North American services are dominated by Los Angeles, capturing over half the seats to the region. It is a hotly contested segment with 35 frequencies provided by 4 airlines, with each of the major alliances represented. Meanwhile San Francisco services are declining.

The other ranked destination, Tokyo, has actually seen a reduction in service since the earthquake and tsunami. Qantas has scaled down, relying on low cost subsidiary Jetstar to provide the Qantas Group's metal in that market. 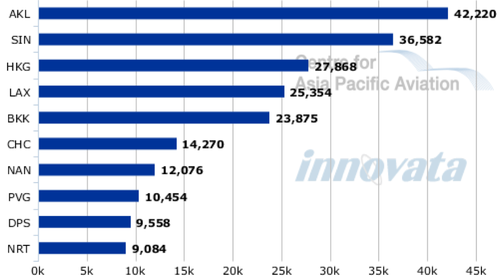 Low cost carriers also have a substantial presence in the Australian market, with close to 40% of the seats provided by this group. It is the oversight and compliance by Tiger, one of these operators, that has caused the current grounding and raised questions as to the regulatory oversight for the group. Obviously, should Tiger permanently disappear, the percentage will shrink. 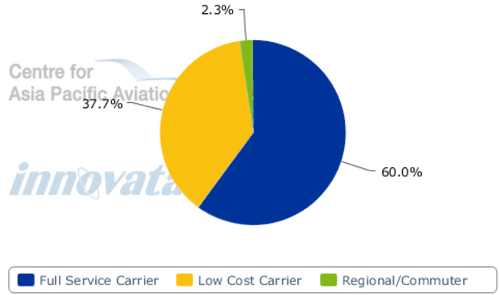 In terms of alliance presence, Qantas’ oneworld membership puts that group on top at Sydney. Nevertheless, that still gives the alliance less than half of the total offer, with the unaligned group, boosted by the Gulf carriers and LCCs, occupying the runner-up spot.

Star has a larger-than expected portion because of the presence of Air New Zealand, Air China, Thai, United and, of course, Singapore’s A380s.

SkyTeam is represented by a number of Chinese carriers, Korean and the newly-begun LAX-SYD service operated by Delta.

SkyTeam will benefit from the addition of more Chinese carriers and Garuda, while oneworld will be further strengthened by the entry of Malaysian, operating 14 weekly widebody services (744, 772). 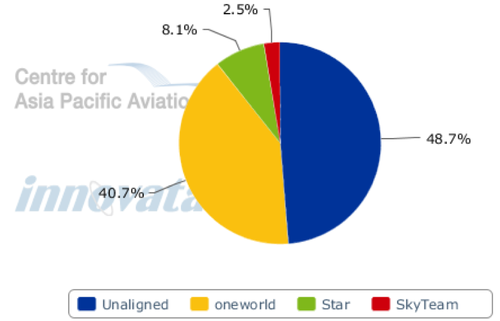 As we have found at most hub airports, domestic travel dominates the operations, with almost a 2/3 share of the seats produced. This is perhaps a surprisingly high number given the presence of so many A380s operating to Sydney. 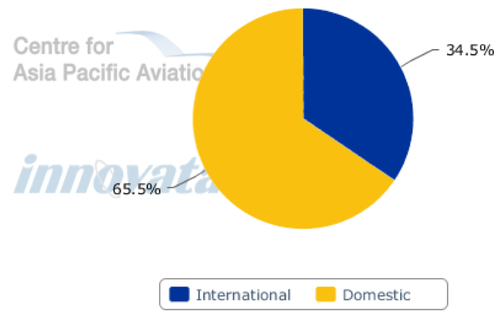 In general, the entry of the B787 and A350 should benefit Sydney and Australia in general. Their lower predicted costs should make long, thin routes, like India, feasible and profitable, bypassing the current required intermediate stops that already have ample service and add expense.

With large expatriate populations from Italy, Greece and India present in Australia, routes like Rome-Delhi-Sydney or Athens-Mumbai-Sydney may be economically viable. There is also a sizable group of Chinese that will spur addition traffic between China and Australia.

Latin America - Brazil in particular - is booming, but infrastructure suggests a yawning gap

Meanwhile, as aviation in Brazil heats up and the infrastructure, especially at Sao Paulo, is improved, Sydney may not remain the sole southern hemisphere representative for much longer. Already the combined airport traffic totals at Sao Paolo's airports exceeds Sydney’s numbers and the city's Guarulhos International Airport has doubled its throughput between 2001-2010, from 13 to 26 million passengers. For Brazil, soon to host almost back to back global sporting events with the World Cup and the Olympic Games, infrastructure will however be the big issue - not the propensity for growth.

Indecisiveness over allocating funds to vital new airport construction threatens to embarrass the nation's politicians as the big events - with their immutable deadlines - roll around. Although a very different economy, Australia, which hosted the 2000 Olympic Games, was only too aware of the importance of having in place the necessary Sydney airport access and forged ahead with development - shortly afterwards the government was able to privatise the airport, capturing a substantial return for taxpayers. Meanwhile all of the country's other main airports had already passed into private ownership.

Brazil has a booming private airline industry and one which is helping transform the economy. The government will need to act quickly if it is to generate the returns and profile it hopes from these major events.