AirAsia X confirmed on 12-Jul-2011 its plans to relocate its UK base from London Stansted to Gatwick from 24-Oct-2011. The move will bring an end to its relationship with Stansted, which is essentially London’s low-cost dedicated airport, after launching five-times weekly services to the facility in Mar-2009.

At the launch of the Stansted route in early 2009, AirAsia CEO Tony Fernandes stated Stansted was selected due to its “great low-cost connectivity across Europe”. The airport won out over Manchester, which is another LCC stronghold in the UK.

Key to ensuring the success of a long-haul low-cost carrier, according to Mr Fernandes and his AirAsia X counterpart Azran Osman-Rani, is ensuring there are adequate connection opportunities for onward travel at both ends, in Kuala Lumpur and London. This would ensure AirAsia X avoids problems that had brought down other long-haul LCCs in the past, most notably Oasis Hong Kong Airlines, which learned the hard way how a lack of feed and distribution can hurt loads and profitability.

Kuala Lumpur-based and Southeast Asia’s largest carrier, AirAsia has always ensured onward connections at Kuala Lumpur. The London end, however, has been trickier. True to the LCC mantra, AirAsia X passengers take care of their own onward services as no formal links have been established. CEO Osman-Rani has previously told CAPA that the “self-connect model at overseas ports will be the mainstay”, with the airline to focus on developing connections primarily at Kuala Lumpur.  Mr Osman-Rani also stated that “there are airports that have started discussions on how to facilitate connections ... the more innovative ones that are open to new ideas and models that are more suitable for low-cost operations than trying to impose the traditional ‘one-size-fits-all’ approach.”

Less than a month after advising CAPA of this, AirAsia X confirmed it would relocate to Gatwick. The move will be made on 24-Oct, after which service will be reduced to three times weekly in Nov-2011, increasing to five times weekly on 01-Dec before being restored to the current six times weekly schedule by mid-2011. A340-300s are currently used on the route and these will be replaced with more fuel-efficient A330-200s in 2012.

Mr Osman-Rani said the decision to switch was aimed at maximising commercial opportunities and increasing traffic flows between the UK and Malaysia. Most importantly, Gatwick offers passengers a far wider choice of destinations and “airline diversity”, compared with Stansted. The CEO also noted Gatwick’s superior surface transport connections as a contributing factor. In line with AirAsia X’s new flat-seat offering aimed at the (cost-conscious) premium passenger, Gatwick offers a user-pays airport lounge through the No 1 Traveller, something which may appeal to a market of travellers the airline is increasingly targetting, although this was not mentioned by Mr Osman-Rani. Gatwick, with its wider catchment area, is also a far better market for higher fares. "In a period of high costs you have to get higher yield [passengers]," Mr Osman-Rani said. "You are seeing some of the low-cost carriers shifting aircraft to Gatwick [for the same reason].”

“Gatwick Airport was chosen as it demonstrated the passion to work with us in realising our objectives to grow passenger traffic between our hubs in Asia Pacific and London,” Mr Osman-Rani stated. Gatwick Airport is understood to have made an “irresistible” offer on landing and parking rates. London Gatwick has been under new ownership since 2009 and has made a concerted effort to reposition itself as a real rival to London Heathrow. “AirAsia X sees strong potential for the airport as we believe our entry will address the fact that direct services to Asia is significantly underserved from Gatwick,” the CEO said. 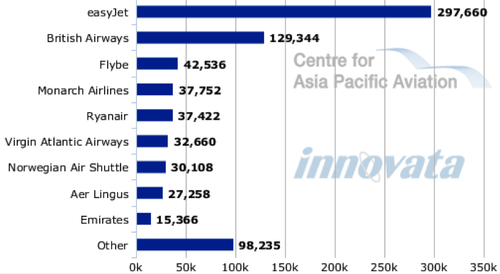 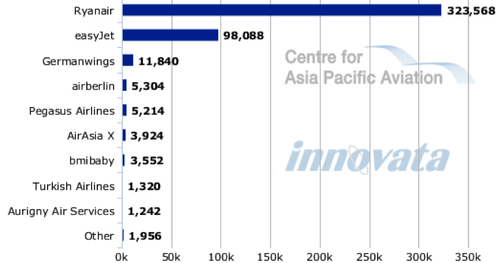 As Mr Osman-Rani mentioned, in addition to the greater opportunities for feed provided by the greater frequency and wider network, Gatwick also offers a greater diversity of airlines. Some 56.3% of airlines serving Gatwick are LCCs, and 35.7% are full-service carriers. 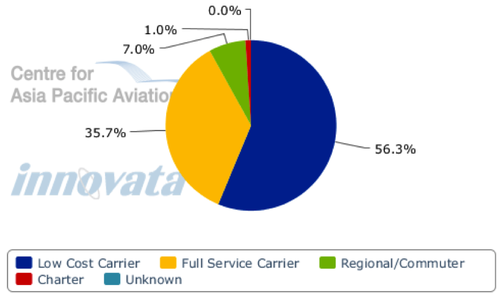 At Stansted, an overwhelming 99.2% of capacity is provided by LCCs. 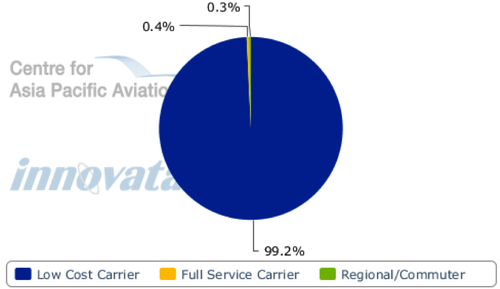 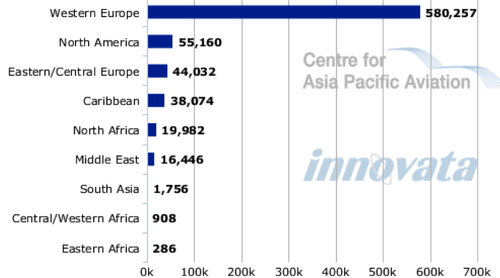 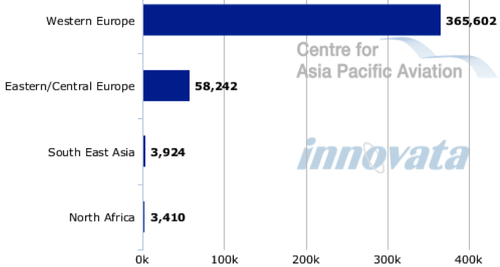 The move to Gatwick is also in line with Mr Osman-Rani’s plans to increase traffic flows between the UK and Malaysia, as Gatwick offers a more comprehensive domestic network than Stansted. The only domestic destinations served from Stansted are Belfast, Edinburgh and Glasgow, all by easyJet. These three points feature on easyJet’s domestic network at Gatwick, and the LCC also operates more domestic frequencies from Gatwick. flybe is another major differentiator between Gatwick and Stansted in terms of domestic travel. flybe operates to eight domestic destinations from Gatwick (including Channel Islands services). It has no presence at Stansted. The low-cost regional airline has announced plans to expand its use of alliances, interlines and codeshares with other airlines and could consider AirAsia X an appropriate candidate. AirAsia X, however, has made no mention of looking to create formal links with other airlines, but is keen to foster relationships with airports looking to encourage onward connections.

For direct LCC connections, AirAsia X’s move could almost be viewed as an easyJet vs Ryanair decision. Both airlines maintain dominance at their London base; easyJet at Gatwick, with 40% of available seats, and Ryanair at Stansted, with 71% of available seats. In absolute numbers, however, easyJet offers about 300,000 weekly seats at Gatwick and Ryanair 320,000 seats at Stansted. Both LCCs maintain a presence at each other’s major London base.

More Europe services on the agenda

AirAsia X’s plan to move to Gatwick is separate to the LCC’s proposed European network growth. Mr Osman-Rani expects the carrier to launch two new routes within 12 months. It launched four-times weekly services to Paris Orly in Feb-2011 using A340-300 equipment. AirAsia X announced in Jul-2011 that it had received a “tremendous response” to the recent Request for Proposals (RFP) for the expansion of its European route network. The final deadline for responses is 01-Aug-2011 and by 01-Sep-2011 AirAsia X will have formalised a shortlist of possible new airport partners.

Rival Jetstar plans to launch services to Europe from its Singapore base, a move which has been slowed by the delay of B787 equipment. It is expected to announce plans to launch services to southern European ports. Athens, Rome, Munich and Barcelona have been floated as potential targets but nothing has yet been confirmed. In the meantime, Jetstar is expanding aggressively into China.

AirAsia’s decision is another loss for Stansted, which has been struggling in recent years due to myriad factors. The airport continues to weigh down the performance of parent BAA’s portfolio, as the airport’s traffic figures have been in an almost perpetual decline since Nov-2007. Mr Osman-Rani stated that his services to Stansted were also suffering from weakening loads, which encouraged him to look elsewhere. Since BAA sold Gatwick in 2009, which made Gatwick a real rival to BAA-owned Heathrow and Stansted, the Surrey facility has had a far more aggressive strategy. In the slow-growth and capacity-constrained UK market, this has meant taking customers (airlines) away from other airports. AirAsia X’s decision demonstrates Gatwick’s success at doing this. London Southend Airport has also emerged as a potential rival to Stansted. Southend is another Essex airport and Stansted-client easyJet has announced plans to launch services from the airport in Apr-2012.