Air Nigeria is resuming its long-haul network after services were cut during a period of restructuring, ownership transfer and re-branding three years ago. The privately held flag carrier, formerly known as Virgin Nigeria and briefly as Nigeria Eagle Airlines, will resume long-haul services in May-2012 to London Gatwick and Johannesburg with plans in the short-term to launch Rome and Paris services.

The Lagos-based carrier has had a false start, expecting last year to resume long-haul flights in Sep-2011, but plans this time are more concrete, with Air Nigeria loading schedules and fares. Its planned services will see notable competition, but like many routes in and out of Africa, are typically high-yielding. Air Nigeria’s forthcoming Lagos-London route is the latest in West Africa-Europe expansion, following notable capacity increases from Brussels Airlines.

Air Nigeria first flagged its intent to resume long-haul operations when the carrier spoke to CAPA last year. At the time the carrier had anticipated an earlier return to service, which was subsequently delayed.

Johannesburg and London services to be followed with Rome and Paris

In Apr-2012 chairman Jimoh Ibrahim announced the airline planned to resume Lagos-London Gatwick service on 16-May-2012 followed by Lagos-Johannesburg service on 17-May-2012. London Gatwick service will initially be operated three times weekly, increasing to daily from 19-Jun-2012. Operating equipment will be A330-200s, which the carrier has not taken delivery of yet. Air Nigeria aims to follow these services with flights to Rome Fiumicino and Paris Charles de Gaulle by the middle of Jun-2012. 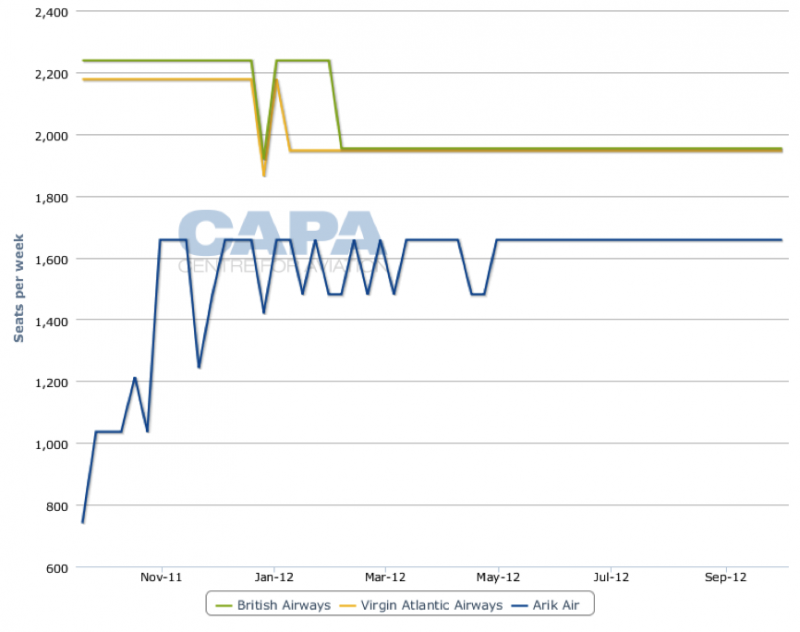 Lagos-Johannesburg service is also currently already operated by Arik Air and South African Airways, which each operate daily services. Air Nigeria will initially operate thrice weekly services on its A330-200. 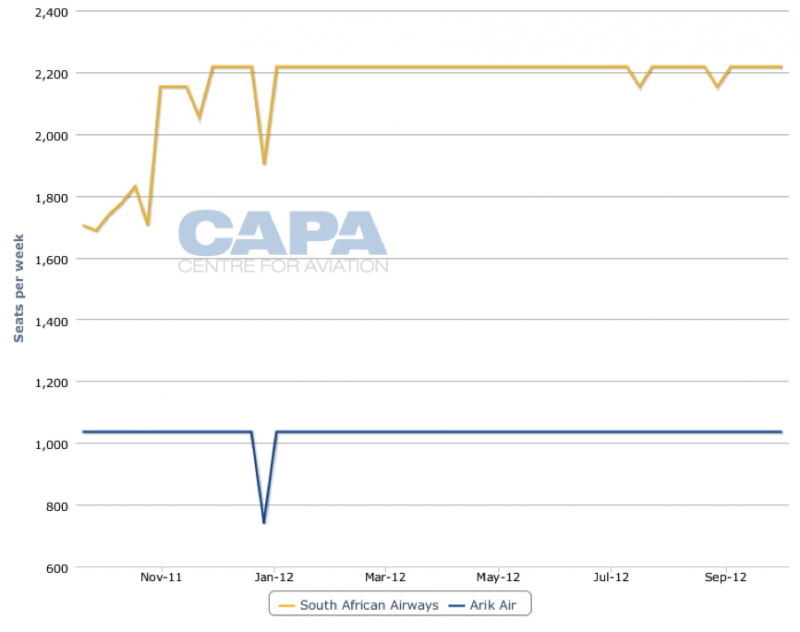 While Air Nigeria will face competition from longer-established carriers, including those with global networks and alliances, Air Nigeria will have the advantage – small but not to be underestimated – of a regional African network that it is growing.

Coinciding with the airline’s new long-haul services, Air Nigeria plans to expand its West African network with the launch of services to Kinshasa, Democratic Republic of the Congo; Freetown, Sierra Leone; Ouagadougou, Burkina Faso; Pointe Noire, Republic of the Congo; and Malabo, Equatorial Guinea. These five new routes expand Air Nigeria’s coverage of Western Africa from 16 destinations in 11 countries to 21 destinations in 15 countries.

To help operate its expanding regional network, as well as new long-haul network, Air Nigeria plans to acquire two A330s and two additional 737s, increasing its fleet to 16 aircraft, which also includes the Embraer E190 type. On long-term order are eight more E190 aircraft to be placed on its domestic and regional network, according to CAPA’s fleet database.

While Air Nigeria’s expansion is a positive move, it does mean Arik Air, Nigeria’s largest carrier by capacity, now faces expanding competition, although Arik Air will remain the leading carrier in the country and growth opportunities are numerous. Currently the second largest is Aero, which mainly operates domestic services to oil and gas-rich areas as well as international service to Ghana’s capital, Accra.

Further increased competition in West Africa is likely in the near-term, especially considering the proposals for low-cost carriers, including high-profile discussions for a carrier, possibly named Fastjet, launched with support from easyJet founder Sir Stelios Haji-Ioannou. 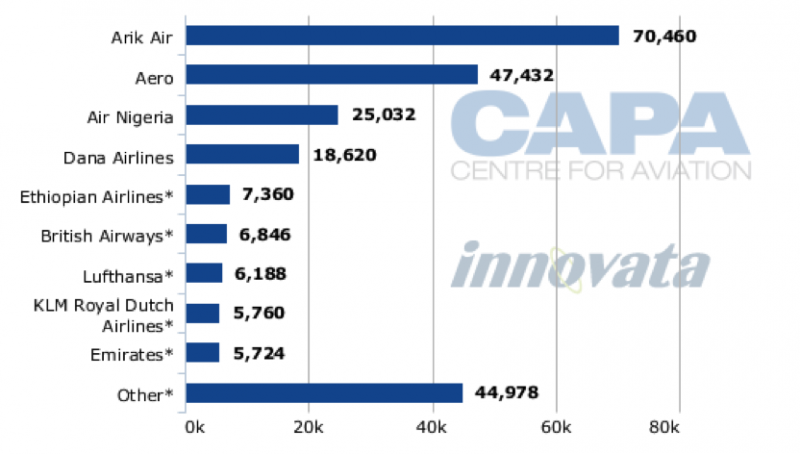 Air Nigeria has had a shaky history since its 2005 commencement of services under the Virgin Nigeria brand, changed as Nigeria Eagle Airlines in 2009 after the Virgin Group announced its intention to sell its stake. The airline adopted the name Air Nigeria once Barrister Jimoh Ibrahim of the NICON Group acquired in Apr-2010 a majority stake and became the airline's chairman.

Under his leadership, the carrier restructured and continued to concentrate on offering domestic Nigerian services and a limited international network covering Central and Western Africa, a strategy that commenced under the previous leadership team.

Growth in regional African aviation, while not headline-grabbing, is what the African continent needs the most. Domestic and regional flights facilitate trade, increasing the strength of local economies. The domestic and regional network will also help support the re-launch of long-haul flights.

The carrier’s medium-term goal is to operate to all major West African cities, now looking increasingly achievable. Through partnerships with Kenya Airways and Delta Air Lines, Air Nigeria is also strengthening its overall network reach. Having shown interest in North America, new long-haul service announcements could come in due course.

Air Nigeria is well-placed to tap into the increasing traffic volumes to, from and within Nigeria and the surrounding area from its base in Lagos. Lagos is one of six African cities Airbus expects to become an ‘airline megacity’, defined as cities that are expected to handle 10,000 passengers per day within the next 20 years. While Air Nigeria has had an eventful short life, there is no shame in restructuring to have a solid operating foundation to support growth that today is only in its infancy.