Air France-KLM and Air Europa are planning a new metal neutral joint venture for Europe-Central/South America routes. They are deliberating the detail of a collaboration that will widen and deepen existing commercial cooperation between Air Europa and both Air France and KLM over more than 15 years.

This includes "an in-depth legal analysis of the terms of this possible future agreement in order to ensure compliance with all applicable laws and regulations". It is hoped that the JV might launch in the summer of 2019.

Bilateral commercial cooperation between the SkyTeam partners is limited to codeshares on routes from their respective hubs to destinations in Europe. If concluded, the new JV would be the first such agreement between the two, and Air Europa's first JV.

In the market from Europe to Central/South America, Air France-KLM and IAG are neck and neck in the capacity ranking. IAG's JV with LATAM would pull ahead, whereas Air France-KLM's planned JV with Air Europa would maintain near parity in capacity and give it a clear lead in the number of destinations in Central/South America. It would also help to strengthen Air Europa in its intensifying competitive battle with its Spanish rival Iberia.

The Europe-Latin America market is dominated by European airlines and led by Air France-KLM, although IAG's Iberia is the biggest individual airline presence in this market.

According to data from OAG for the week of 13-Aug-2018, Air France is the number two airline by seats between Europe and Latin America, with 10.8% of seats and only fractionally behind Iberia, which has 11.1%. Air Europa is number three, with 7.3% of seats, and KLM is number four, also with 7.3%.

However, the planned JV between IAG and LATAM Group would have a seat share of 22.1%, taking it ahead of Air France-KLM. The Air France-KLM/Air Europa JV would reclaim the lead, with 25.4% of seats.

The planned JV will focus on the market between Europe and Central/South America (i.e. Latin America excluding the Caribbean).

In terms of airline groups, Air France-KLM's lead in this market is almost non-existent. Its 18.4% seat share compares with 18.2% for IAG. Moreover, the proposed IAG/LATAM JV would add in fourth placed LAN's 8.9% to create a combined share of 27.2%, significantly more than Air France-KLM.

The Air France-KLM/Air Europa JV would have a seat share of 26.4% on routes between Europe and Latin America excluding the Caribbean. This would still be less than the IAG/LATAM JV, but would narrow the gap considerably.

In the market between Europe and Latin America excluding the Caribbean, Air Europa has 15 destinations, while Air France has 13 and KLM has 14. As a group, Air France-KLM has 18 unique destinations (nine are served by both of its main airlines).

There are four destinations served by all three airlines (Bogotá, Buenos Aires, São Paulo and Lima) and four more destinations that are served by both Air Europa and one of the Air France-KLM airlines (Cancún, Caracas, Guayaquil and Quito).

Nevertheless, both sides will bring to the JV a significant number of destinations not served by the other party. 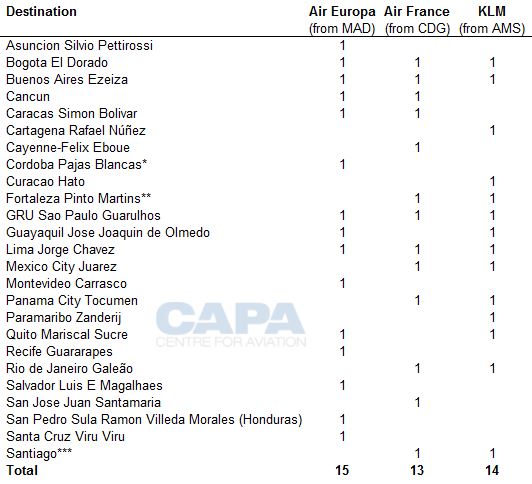 BA has eight destinations in Latin America excluding the Caribbean, while Iberia has 15. They have 16 unique destinations between them.

The LATAM JV will effectively bring additional seat capacity to IAG, but only adds one destination to those already served by BA and/or Iberia.

LAN Airlines has four destinations in Latin America served from Europe (São Paulo, Santiago, Lima and Guayaquil), but only one (Guayaquil) is not served by IAG airlines (the other three are served by both BA and Iberia).

Based on the week of 13-Aug-2018, the Air France-KLM/Air Europa JV would have 25 unique destinations in Latin America excluding the Caribbean, while the IAG/LATAM JV would have 17. 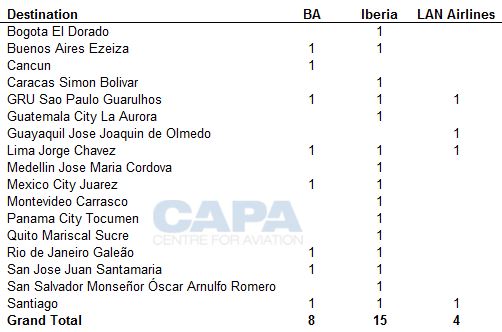 Air Europa already has 22 codeshare partners, including Air France and KLM in addition to most other SkyTeam members (these include Aeroflot, Delta, Alitalia, China Eastern, and Korean Air). The only SkyTeam members that do not codeshare with Air Europa are China Southern and Kenya Airways.

In Latin America, it has codeshare agreements with SkyTeam's Aerolineas Argentinas and Aeromexico, in addition to Avianca Brazil. Outside the SkyTeam alliance, Air Europa's codeshare partners include Ethiopian Airlines, Etihad and Turkish Airlines.

Latin America is by far the most important region for Air Europa's network outside Europe.

The region accounts for 37.3% of the airline's international departing seats in the week of 13-Aug-2018, or 29.1% excluding the Caribbean. Overall Latin America makes up 87.4% of Air Europa's long haul seats (source: OAG). 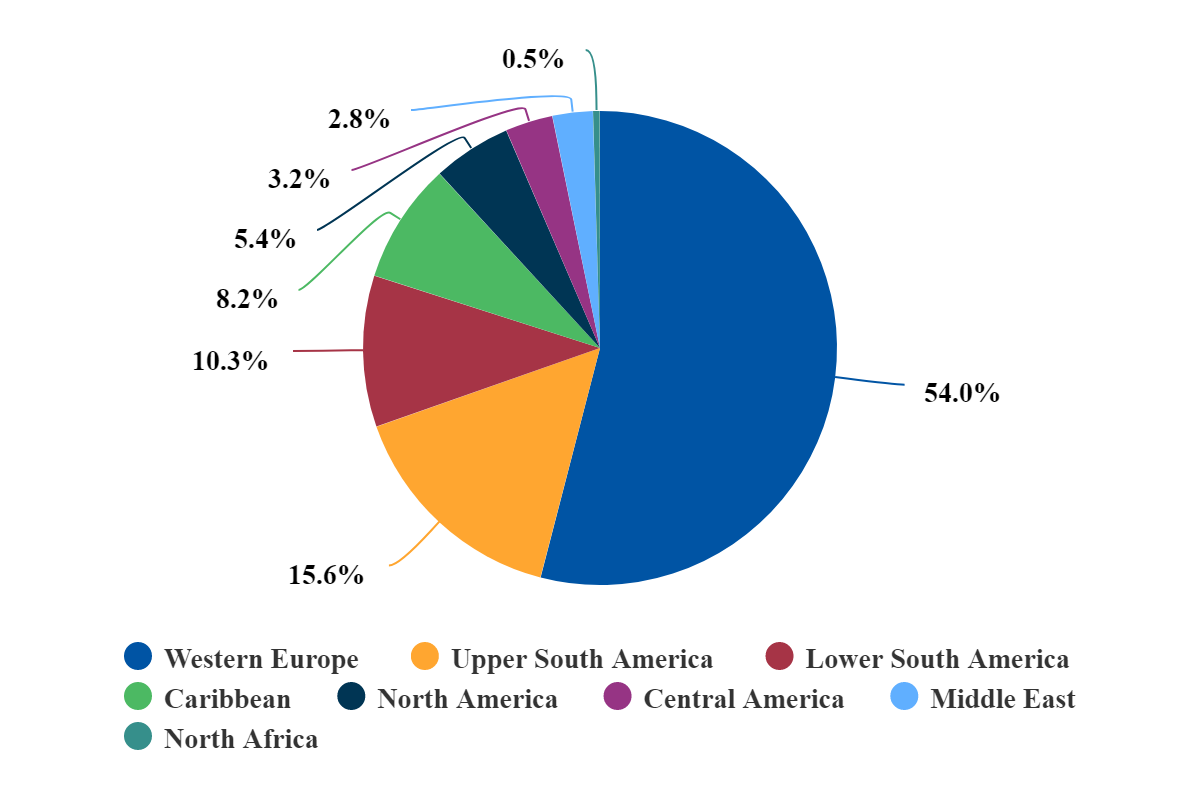 The proposed new deal looks positive for both sides

There remains much detail to be worked through by Air Europa and Air France-KLM and finalised.

An important related element will be to ensure sufficient feed and beyond traffic in Latin America. This may require some expansion of codeshares with local airlines in the region for both Air Europa and Air France-KLM, possibly eventually bringing Latin American partners into the JV.

In addition, there may also be some concerns from competition authorities.

Nevertheless, at first sight, the proposed new deal between the two looks to be positive for both sides. The planned JV between IAG and LATAM was announced in 2016 and is thought to be nearing final competition authority approval. That deal will result in a grouping with a clear lead on routes between Europe and Central/South America.

A JV between Air France-KLM and Air Europa looks like a suitably aggressive response.