Wizz Air to pursue further expansion in Lithuania and Ukraine

Eastern European low-cost carrier group Wizz has unveiled plans to expand its Vilnius base in Lithuania and establish its third Ukrainian base in Lviv. The announcements follow other recent expansion announcements that will see Wizz expand its bases in Bulgaria and Macedonia.

In the Lithuanian capital Vilnius, Wizz Air will expand its fleet of A320s at the airport to three aircraft. The carrier will use the additional aircraft to launch three new routes and increase frequencies on five existing routes.

Meanwhile the group’s Ukrainian subsidiary Wizz Air Ukraine plans to base one A320 at Lviv from 30-Apr-2014. The aircraft will be used to launch five new routes from Lviv, which Wizz Air Ukraine now serves with three routes. The A320 to be based at Lviv Airport will be Wizz Air Ukraine’s fifth aircraft overall.

Wizz Air to increase seat capacity by 30% in Vilnius

Wizz Air’s plans to expand its Vilnius Airport network will initially see the launch of one new route, Vilnius-Tel Aviv, in Oct-2013 with two more to Kutaisi and Corfu to follow in Mar-2014. The airline will also increase frequencies on five of its existing routes from the airport.

To operate this expanded network Wizz Air plans to base a third A320 at the airport from Mar-2014. The additional aircraft and expanded network will see the Hungary-based LCC increase its seat capacity in Vilnius by 30% and operate 16 routes from the airport.

There have been no domestic air transport networks in Lithuania since the collapse of the country’s former flag carrier FlyLAl in Jan-2009. 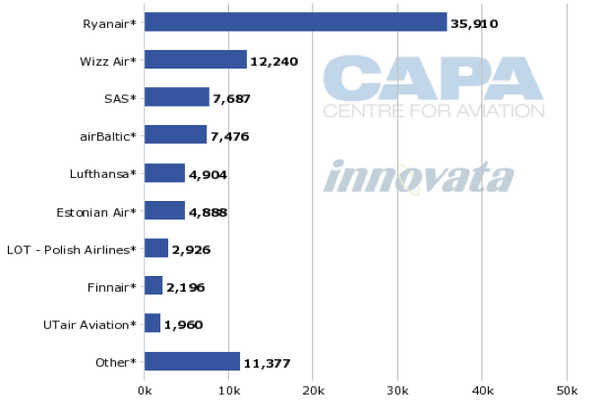 When only considering operations from Vilnius, Wizz Air and Ryanair offer similar capacity volumes at just over 12,000 and 15,000 weekly seats, respectively. This equates to around 19% and 23% of overall capacity at the airport by Wizz Air and Ryanair respectively. The airlines currently compete on six routes from Vilnius. Of the five existing routes Wizz Air plans to increase frequency on, it currently competes with Ryanair directly on three and indirectly on one.

Particularly due to Ryanair and Wizz Air’s operations in the country, LCCs have a very high capacity share in the Lithuanian market of almost 65%. However, of the 18 airlines which operate to and from Lithuania, only four are LCCs and one (airBaltic) is a hybrid carrier.

Wizz Air’s planned growth in Vilnius in summer 2014 will likely see it overtake Ryanair to become the leading carrier in Vilnius. But overall Ryanair will retain its leading position in the Lithuanian market due to its operations in Lithuania’s second-largest city, Kaunas, where it currently accounts for almost 98% of international capacity.

Wizz Air Ukraine’s existing Ukrainian operations consist of international services from key cities in the country. The airline’s main base in the country is located at the capital’s secondary airport, Kiev Zhuliany International Airport, where it operates to 14 international destinations. The carrier currently only has two bases, with its second located at Donetsk Airport. The Donetsk base opened on 1-Oct-2013.

From the new base at Donetsk, four new routes have been launched to Milan Bergamo, Rome Fiumicino, London Luton and Munich Memmingen. The Donetsk based aircraft have also taken over existing services from Donetsk to Kutaisi and Dortmund. Kutaisi and Milan Bergamo are operated four and three times weekly respectively, with the remaining routes to be served twice weekly.

Wizz Air now a significant player in the Ukrainian market

Wizz Air Ukraine has accelerated growth in 2013 following the collapse of Aerosvit, which was one of Ukraine’s two main international carriers. From operating only two aircraft until Mar-2013, Wizz Air Ukraine has doubled its fleet to four aircraft and plans to take delivery of its fifth aircraft in the coming months.

Aeroflot is the largest foreign carrier in the Ukraine and also has about a 10% share of international capacity in the country, according to CAPA and Innovata data. 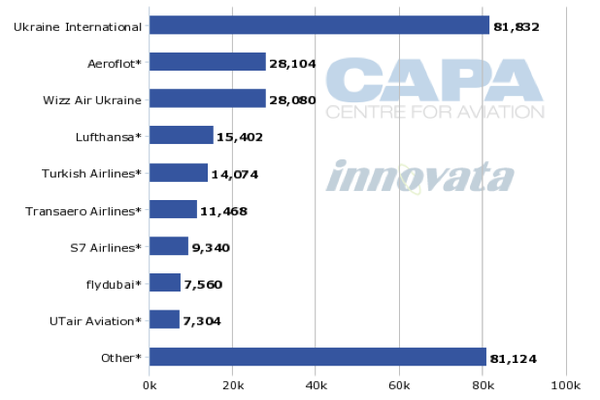 Wizz Air Ukraine’s expansion, particularly with its growth in Lviv, will see the airline separate itself from Aeroflot and become the stand-alone second largest international carrier in the Ukraine. However despite this growth, UIA will remain the leading carrier in the country with a strong market share, particularly thanks to the demise of Aerosvit in early 2013 which saw it take over a number of ex-Aerosvit routes and aircraft.

Wizz Air’s continued expansion in Eastern Europe will enable it to strengthen its position in the region ahead of any further expansion by rival Ryanair. Wizz Air Ukraine’s further operations into Ukrainian comes ahead of the country’s open skies agreement with the EU, which is expected to be finalised in 2014.

Ryanair recently expressed its interest in the Ukrainian market and said it would look at entering the country following the EU open skies agreement. Ryanair has reportedly already commenced preliminary talks with airports in Kiev, Lviv and Donetsk. Wizz Air Ukraine remains a small carrier but its recent expansion gives it a more significant presence in the Ukrainian market ahead of any entry by Ryanair.

As LCC competition intensifies across the Eastern European region, Wizz is keen to accelerate expansion by expanding several of its existing bases and adding new bases. The recent flurry of announcements is likely just the tip of the iceberg as Wizz, Ryanair and other European LCCs continue to tap into the opportunities in Eastern Europe’s emerging markets.