Wizz Air recently unveiled plans to further expand its presence in the Eastern European market with expansion of its Skopje operations from Apr-2014.

The expansion will see the Hungarian-based LCC base a second aircraft at the Macedonian capital and launch three new routes, as well as increase frequencies on existing routes.

Since entering the market nearly two years ago, Wizz has grown to become the country's largest operator, accounting for more than a third of seats in week beginning 26-Aug-2013.

The Republic of Macedonia, also referred to as the former Yugoslav Republic of Macedonia (FYROM) (due to a naming dispute with Greece) is located in Southeast Europe and shares borders with Serbia, Kosovo, Bulgaria, Greece and Albania. According to the World Bank, Macedonia had a population of about two million and a GDP of about USD9.6 billion in 2012. Since 2004 the small country has been a candidate for accession into the EU. It is now one of five remaining candidate countries along with Iceland, Montenegro, Serbia and Turkey.

Macedonia has seen considerable aviation traffic growth over the past year, driven by low-cost carriers including Wizz Air, Pegasus Airlines and flydubai. The country has two commercial airports, with the majority of traffic handled by Skopje Airport. Macedonia does not have any local carriers but there are nine foreign airlines including four LCCs operating to the country.

Wizz Air to double Skopje base in Apr-2014

Wizz Air’s planned expansion of its Skopje Airport base will see it grow its existing network of eight international destinations to 11 with the introduction of Brussels Charleroi, Frankfurt Hahn and Paris Beauvais. The expansion will also see the airline base a second A320 aircraft at Skopje Airport, increasing the airline’s total fleet investment in Skopje to over USD160 million.

Wizz Air first entered the Macedonian market in Jun-2011 with London Luton-Skopje service. This was followed by Venice Treviso-Skopje service in Sep-2011.

The government initiative to subsidise new LCC routes came after talks failed with two full-service carriers, Jat Airways (now Air Serbia) and Turkish Airlines, to base an aircraft at Skopje. The government has been proactive as it seeks to fill a void stemming from the lack of a local Macedonian carrier.

With the flights added last winter, Wizz Air currently offers a total of 9,720 weekly seats, making it the largest carrier of the nine operating in Macedonia.

There are currently no operators on any of Wizz Air’s planned new routes from Skopje. Jetairfly, however, serves Skopje from Brussels, which will provide indirect competition to Wizz Air’s new Skopje-Charleroi service.

From Apr-2014 Wizz Air also plans to increase frequencies on six of its eight existing routes from Skopje. The only two routes not slated to be increased are London Luton and Milan Bergamo.

As earlier stated, Wizz Air is currently the largest of the nine airlines currently operating to/from Macedonia, contributing around 35% of total seat capacity in the country. Wizz Air is followed by Austrian Airlines and Turkish Airlines, with approximately 14% and 13% of total capacity, respectively.

There are no scheduled domestic flights in the country so all routes are international. Macedonia has not had an operational national carrier since 2009 when MAT Macedonian Airlines collapsed. Remaining flag carriers in the other former Yugoslavian countries have also been struggling in recent years, which led to suggestions they should unite to secure their futures. Three of these carriers now serve Macedonia: Serbia’s Air Serbia, Croatia Airlines and Slovenia’s Adria Airways.

This also shows the considerable impact Wizz Air has had on the overall Macedonian market with the market having significantly expanded since Wizz Air’s winter 2012/2013 expansion. The market is poised to further change as Wizz Air again expands in summer 2014, resulting in Western Europe becoming an even more significant market for Macedonia. 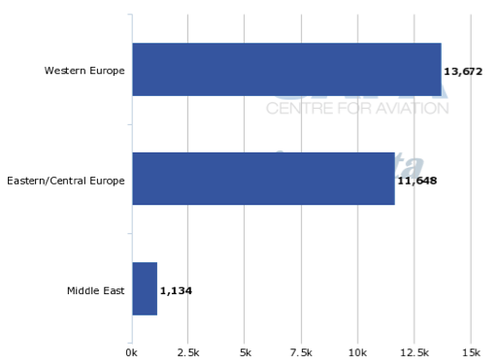 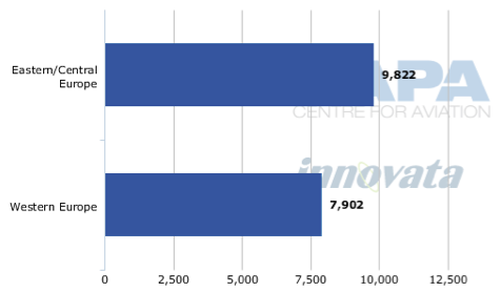 96% of Macedonian capacity handled through Skopje

Skopje Airport is located in northern Macedonia and serves the country’s capital. The airport is the largest airport in the country and handles an overwhelming majority of the traffic. According to CAPA and Innovata data, Skopje Airport currently accounts for 96% of the country’s passenger capacity, equating to nearly 27,000 weekly seats. Macedonia’s only other airport, Ohrid Airport, is located in the southwest of Macedonia.

Air Serbia and Jetairfly are the only carriers currently operating scheduled flights to the airport, according to Innovata data.

Air Serbia and Jetairfly serve Ohrid from Belgrade and Brussels, respectively. Both these routes operate via Skopje but no local traffic is allowed to be carried on the domestic segment. The Ohrid Airport is around 200km from Skopje Airport and currently accounts for about 4% of the country’s capacity, equating to just over 1000 seats.

Wizz Air’s expansion plans in Apr-2014 will see not only Wizz Air’s position in the market strengthen even further but also the LCC penetration will exceed the 50% mark. As a result the LCC model will become the dominant airline model operating in the country.

A notable absence from the Macedonian market at the moment is Ryanair. Considering Ryanair’s recent expansion in Eastern Europe, including in Slovakia, it is likely to be monitoring the Macedonian market closely, particularly with the government’s current policy towards attracting LCCs to the country.

Regardless of whether Ryanair eventually enters the Macedonian market, the growth by Wizz Air alone is resulting in Macedonia’s aviation market developing at a rapid pace. Whether this will be sustainable in subsequent years when subsidies are no longer on offer is yet to be seen. But it is possible that the head start Wizz Air has received will be enough to see the increased links between Macedonia and the rest of Europe become entrenched over the long term.