Wizz Air is pursuing further expansion in the Eastern European market with recently announced plans to grow its Sofia base in 2013 and 2014. The expansion will see the low-cost carrier base a fourth aircraft at the Bulgarian capital and launch two new routes, as well as increase frequencies on four existing routes.

The expansion will focus mainly on Western European destinations, including a new twice weekly flight to Malmo in Sweden. But there will also be a new thrice weekly link from Sofia to Dubai’s new airport.

Wizz's expansion places further pressure on flag carrier Bulgaria Air, which currently accounts for 26% of capacity in its home market.

The Wizz Air expansion at Sofia will further increase the LCC penetration rate in Bulgaria, continuing a trend which started with the country’s first LCC service in 2005. Bulgaria has since seen considerable LCC growth. LCCs contributed 0% of international capacity in 2004 but accounted for 30% of international seat capacity in the country in 2012, according to OAG data. 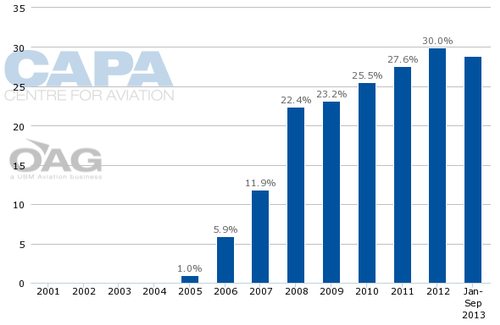 Source: CAPA – Centre for Aviation with data provided by OAG

Bulgaria is located in southeastern Europe and shares borders with Romania, Serbia, Macedonia, Greece and Turkey. With a population of around 7.3 million and a GDP of about USD51.03 billion in 2012, Bulgaria has been a member of the EU since 2007, according to the World Bank.

Bulgaria has four main commercial airports - Burgas, Plovdiv, Sofia and Varna. The majority of traffic is handled by the capital’s Sofia Airport in the western area of the country. Bulgaria has some local carriers, primarily Bulgaria Air, which serves domestic and international destinations.

Burgas and Varna are Bulgaria’s second and third largest cities and are located in eastern Bulgaria on the Bulgarian Black Sea coast. According to CAPA and Innovata data, 85% of Wizz Air’s overall Bulgarian capacity is through Sofia, with the remaining 15% equally shared between Burgas and Varna.

To operate its expanding network from Sofia, the airline will add a fourth A320 to the base in May-2014. The new aircraft will support operations of a total of 16 Sofia routes and increase seat capacity by 30%.

Wizz Air’s new route to Dubai World Central Al-Maktoum International Airport will increase the number of weekly seats to the Middle Eastern region but this will remain the smallest international market for Bulgaria. Wizz Air will be the first passenger airline to operate from Dubai World Central when it begins operations from the airport’s recently completed passenger terminal in Oct-2013 with several initial routes. (The airport has been handling some cargo flights since 2010.) 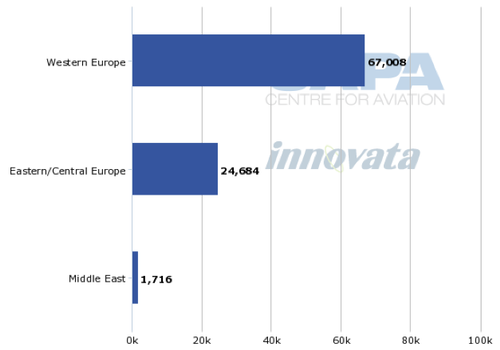 Wizz Air and Bulgaria Air currently compete on eight routes, including four directly and five indirectly due to secondary airports. All these routes are from Sofia as the airlines also do not currently overlap in Burgas or Varna. Therefore just over half of Wizz Air’s Sofia routes see it compete with the Bulgarian national carrier. Three of these, Brussels South Charleroi, London Luton and Milan Bergamo will see frequency increases from Wizz Air in 2014.

Wizz Air’s continued expansion in the eastern Europe will continue to strengthen its position in the region ahead of any further expansion by Ryanair.

Wizz Air’s increasing eastern European presence will also be potentially concerning to the region’s remaining flag carriers such as Bulgaria’s Bulgaria Air, which is already competing against Wizz on eight western European routes.