UK airports record strong summer and first half, but charter carriers face up to new realities

The UK’s major airports have reported a surprisingly upbeat summer season, with the country’s largest airport operator BAA setting a new passenger traffic record. London Luton, Gatwick, City and Manchester have also posted encouraging results this year, as the country shifted back into growth mode after a difficult few years. But BAA has warned that the better times could to be coming to an end, with a weaker-than-expected growth outlook for the remainder of the year.

BAA’s director of strategy and forecasting Andrew Macmillan told the Financial Times on 12-Sep-2011 the company expects a slowdown in passenger growth over autumn 2011, on the back of deteriorating global economic conditions.

“We had a record summer, but would always urge some caution. Economic trends do suggest a slower autumn,” Mr Macmillan said, adding there was nothing to indicate a decline in business travel at BAA’s airports during Sep-2011. The resilient business travel sector has been a boon to both BAA, the owner of London Heathrow, the world’s largest premium travel hub, and its largest client British Airways, in 2011. IAG, in its first half (six months to 30-Jun-2011) earnings report, noted that its exposure to London’s premium travel market through BA and this market’s “continued strength” contributed to the group’s surprisingly strong first half result.

The cargo sector paints a rather bleaker picture, one that is also largely seen across global cargo markets. Softness in the worldwide trade flows partly reflects the 2010 recovery, when companies were restocking inventories following the downturn, but it also reflects a softening in the economic outlook for much of the developed world, particularly Europe and the US. Air cargo is generally viewed as a bellwether for underlying economic conditions.

First half traffic up, but UK’s charter segment the laggard

While the short-term outlook for the UK market is less buoyant, the latest data from the UK Civil Aviation Authority (CAA) confirms that UK airports returned to growth in the first half of 2011 (six months to 30-Jun-2011), despite myriad headwinds including weak economic growth, low consumer confidence and a slew of new taxes, most notably the controversial Air Passenger Duty (APD). Total traffic was up 6.8% to 102.1 million. Excluding the months of Apr-2010 and Apr-2011, which were heavily skewed by the ash cloud event, more accurately capture underlying traffic trends, passenger traffic is up 2.7% year-on-year to 84.1 million.

Stark differences remain between the UK’s major air transport markets. London, unsurprisingly, continues to post stronger numbers than the rest of the UK. While scheduled traffic is on the up, charter traffic continues to struggle, which is forcing the UK’s largest charter airlines to adapt.

Scheduled passengers are boosting the system passenger traffic growth rate, rising 7.7% year-on-year to 92.9 million. The balance is held by the UK’s struggling charter segment, which has been in negative territory for almost a decade. In 2001, the sector’s peak, 38.4 million passengers travelled on a charter service, according to the CAA. Nine years later, in 2010, that figure had plummeted 40% to 22.7 million, due largely to the growth of the LCC segment. 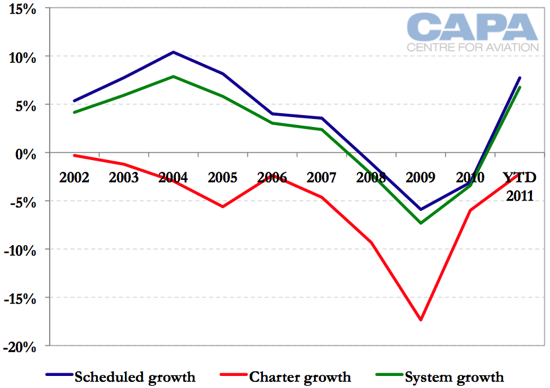 The UK charter sector had a remarkable rise in the 1980s and 1990s, culminating in 2001, when one in every five air passengers in the UK on a charter service. Now that figure is just one in ten and the sector continues to weigh on the UK system growth rate, posting sharp year-on-year declines in every year of the past ten.

Whilst charter traffic continues its decline, the share of the UK travel market attributable to LCCs continues to increase. The largest single charter markets from the UK, which include Spain and the Canary Islands, Greece and Turkey, are also the markets where growth-hungry LCCs such as Ryanair, easyJet and Jet2.com are expanding. In addition, the fall of the charter sector coincided with the rise of the Internet and online bookings, rendering the charter sector’s traditional distribution channels less effective.

London also continues to record stronger growth rates than the rest of the UK, reflecting the capital’s economic importance and better recovery from the downturn in 2008. London’s passenger traffic tends to grow 1% ahead of the rest of the UK. 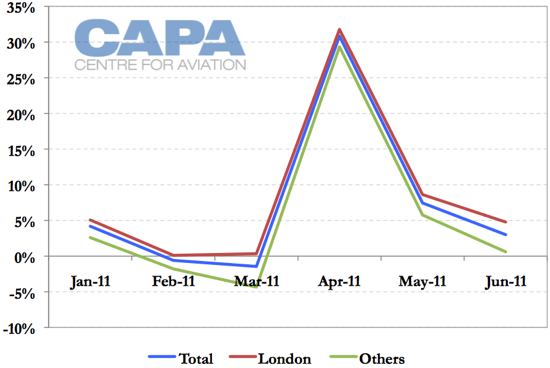 The London area accounts for an disproportionately large part of UK aviation activity, relative to its population. While the city and its surrounds account for 20% of the UK population, London airports handle two-thirds of the country's passenger numbers. London airports handled 62.8 million passengers in 1H2011, a 7.8% year-on-year increase. All other airports handled a combined 39.4 million passengers, up 4.7%. Excluding the impact of the ash-cloud affect results on Apr-2010 and Apr-2011, it is evident the London area has stronger underlying demand than does the rest of the UK. Excluding the April results, London traffic is up 4.7% year-on-year, and the rest of the UK is up a much more muted 0.8%.

These results reflect the economic importance of London to the UK economy, the capital’s economic health relative to the rest of the UK, and the city’s airports as a transit hubs for much of the UK population.

Also important is the difference between the traffic types across the UK. London is far less reliant on the embattled charter industry than is the rest of the UK. In 1H2011, charter traffic accounted for 2.8 million, or 4.4%, of London-area passenger traffic. In the rest of the UK, charter traffic accounted for 6.5 million, or 17.3% of the total. While London handles nearly twice as many scheduled passengers as all other airports, these facilities handle twice as many charter passengers as London, and therefore have far more exposure to a sector in perpetual decline. 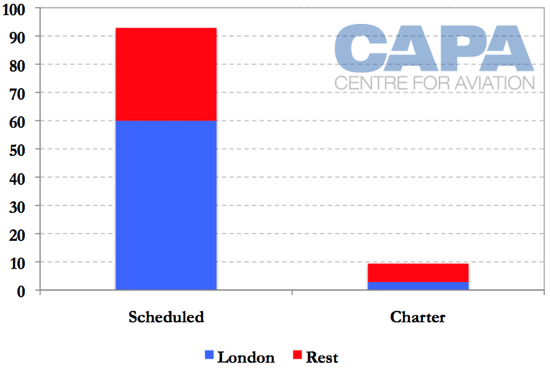 Monarch Airlines and Thomas Cook Airlines, the UK’s two largest charter operators, are both making major changes to their strategies as they adapt to the new realities of UK aviation. The UK’s leisure segment, particularly the long-haul segment, has been hit hard in recent years, initially a problem stemming from the economic downturn in 2008, but one that has been compounded by a sluggish economic recovery, sustained high fuel prices and new government taxes on the aviation industry, which disproportionally affect long-haul passengers.

Monarch Airlines has detailed plans to depart from the charter model and transition into the scheduled market, joining the likes of Ryanair and easyJet, two airlines largely responsible for the collapse of the charter market, in the short-haul LCC space.

Despite the clear downward trend in charter travel and the rise of LCCs and Monarch’s previous moves to increase its share of the LCC travel market, Monarch has said the move is not an attempt to take on the rival LCCs, but the strategic overhaul rather “reflects the direction of the industry”. Group CEO Fabio Mantegazza believes the move will allow the airline to have a “more balanced” relationship with its tour operator partners in a market where scheduled operations are growing and charter operations are not. “We have dealt with tour operator all our lives, we understand tour operations, and we think selling them scheduled capacity gives us the opportunity for a more balanced business relationship,” Mr Mantegazza said.

Charter operations will continue to play a role at Monarch, despite the sector's perpetual decline in the UK. “We have not changed the strategy. We are adapting to the way the business is evolving and as far as tour operators are concerned we want to do business with tour operators as long as it makes sense,” the chairman has stated.

In line with its renewed focus and plans to streamline its fleet, Monarch has cancelled its order for six B787-8s, a move that was widely anticipated. The airline made clear it will be focusing on scheduled, short-haul international markets and there was clearly no longer a requirement the range capability of the B787, nor the available capital to support the aircraft purchases. The carrier has 30 aircraft in its fleet, including four A300-600Rs and two A330-200s, according to Ascend. It has no other orders at present. The widebody equipment is likely to either be sold or remain in the fleet to allow Monarch to continue operating charter services. CEO Conrad Clifford has recently stated that Monarch is looking to increase its fleet by at least 10 aircraft over the next five years.

The Thomas Cook Group, owner of charter-exposed Thomas Cook Airlines, has been engaged in wide-scale restructuring following three profit warnings in the past 12 months and the departure of Group CEO Manny Fontenla-Novoa. The cutbacks are now being extended to the airline. The group has confirmed plans to shed six aircraft and 250 jobs from Thomas Cook Airlines by the end of 2011. It said the cutbacks will mostly affect staff based in Manchester but added crews at other bases could also be affected.

“The fleet reduction is one measure within our overall strategic and operating review of the UK business and demonstrates the decisive action that we are taking to improve the profitability of our UK business,” Thomas Cook Mainstream CEO Ian Ailles stated. “The airline review has focused on leases, seasonal capacity and mainstream tour operator demand, as well as operational efficiency and profitability.”

Meanwhile the incumbent LCCs are also tweaking their models to better compete in the new economic environment. Rising input costs and a revised weaker outlook for revenue growth has seen Ryanair and easyJet hunt for yield, which has seen changes to route networks, airports served and the introduction of various yield-supportive measures such as ancillary offerings and capacity cuts.

The UK aviation market, while back in growth mode, is far from a picture of financial health, at least for the airline sector.

Approximately 210 million passengers passed through UK airports in 2010, a 3.4% year-on-year decline. 2010 was the UK’s third consecutive annual fall in passenger traffic. Despite the positive trends of the first six months, the UK aviation market remains smaller than it was in 2004, essentially having lost six years of growth.