The return of the European fifth freedom route

Estonian Air’s Chairman, Joakim Helenius, has indicated the carrier plans to develop a new route plan using Vilnius (Lithuania) and airports in Poland as layover points for services into western Europe. The carrier has already trialled Tallinn-Vilnius-Amsterdam services, achieving average load factors of 83%, including a record 90% average in Jul-2010. Using the scheme will allow the carrier to operate daily services to Paris, London, Milan, Rome and other western European routes. Some profitable direct services, such as Moscow, Brussels and Copenhagen will be retained. Estonian Air hopes to announce further details of the strategy in early Feb-2011.

Using the scheme will allow the carrier to operate daily services to Paris, London, Milan, Rome and other western European routes. Some profitable direct services, such as Moscow, Brussels and Copenhagen will be retained. Estonian Air hopes to announce further details of the strategy in early Feb-2011.

Under the existing European regulations the skies are "open" to this sort of arrangement for airlines domiciled in, and operating within, EU member countries but it is an uncommon one in the era of direct point-to-point flights by budget airlines that mainly bypass primary airport hubs. The key is the economic viability of the route, which is determined by the supply provided by other airlines, the price offered, and flight timings, the latter consideration especially important on business routes.

Lithuania does not have a national carrier since the demise of FlyLal but in this instance Paris CDG and Rome Fiumicino are already served from Vilnius by Latvia’s airBaltic. They are not fifth freedom routes but airBaltic has established a presence outside Latvia with direct services in Norway, Sweden and Finland. Wizz Air will commence services between Vilnius and Rome and Milan for summer 2011. An opportunity exists for Estonian Air on the London route, which is only operated seasonally at present.

Apart from Wizz Air, Norwegian Air Shuttle and airBaltic (which is a marginal case), there are no other LCCs at Vilnius, with a distinct absence of Ryanair, easyJet, airberlin, Vueling et al, though Ryanair has opened a base this year at Kaunas, Lithuania’s second airport, with an 18-route network that includes London's three airports and Milan Orio al Serio. easyJet has a single route network (London Stansted), actually at Tallinn.

For a variety of reasons Poland remains less well served by air than it might be. Ryanair operates at nine cities, not including Warsaw, but none of them are a base and easyJet is present only at Krakow. There may be opportunities for Estonian to operate via one or more of Poland’s cities but from Warsaw the cities of Paris, London, Rome and Milan are already served by LOT and (except in the case of Milan) the national airlines of the other country. Some analysts believe Estonian’s marketing costs within Poland would be too high to make the operation sustainable.

While LCC penetration in Europe as a whole has risen to 35.3%, and in western Europe to 37.3% it remains comparatively low in Eastern Europe at just 7.9% (source: CAPA/OAG Facts). 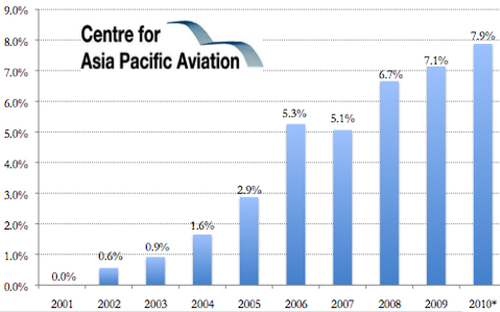 It is uncertain which strategy Estonian Air will follow. There is no evidence it is preparing to change into an LCC but it is facing up to the challenge of Ryanair at its home base (see: Estonian airline prepares to meet the challenge of Ryanair). In order to compete with LOT, national flag carriers and airBaltic it will have to offer low prices on the fifth freedom part of each route, (eg Vilnius-London, or Warsaw-Paris) as has always been the case, although that could have interesting repercussions for yield management procedures. In fact, to become a de facto LCC for one part of a route, suggests it might be better to be an LCC for all of a route except that higher airport-related costs might make that unsustainable. It is quite a conundrum.

Long-haul fifth freedom activity has been prevalent in Europe for many decades, for example Air India and Kuwait Airways via London Heathrow to and from North America, Pan Am also had rights through London for many years and more recently the US-Europe Open Skies agreement, which was skewed in favour of US airlines, provided opportunities for carriers such as Delta to connect points in Europe with trans-Atlantic services.

Before Europe’s skies were deregulated in the late 1980s and 1990s short and mid-haul fifth freedom routes were attempted only occasionally, within the framework of existing bilateral air service agreements, which usually meant that the route had to be to the satisfaction of three countries rather than two (and occasionally four). One of the best examples was Aer Lingus, which operated such routes from Dublin via Manchester to European cities such as Amsterdam, Dusseldorf, Brussels, Frankfurt, Zurich, Rome and Copenhagen in the 1990s with traffic rights on each sector of the journey, as it attempted to set up a secondary hub at Manchester. This was at a time when pooled services were at their peak, with often just the national carrier of each country operating one round trip service every day, in the morning and evening rush hours, sharing revenues on the route.

Aer Lingus came into the frame prompted by the emergence of a new competitor, Ryanair, in the late 1980s (though Ryanair was quite a different airline at that time offering low fares but with much less in the way of cost control); the dramatic growth of Manchester as a gateway in that period; and as a result of the much more relaxed regulatory regime from 1987 onwards (the "first package"), which was introduced in stages. By varying its frequencies it could offer services useful to business travellers that filled the gaps between these pooled services.

Ultimately, the Aer Lingus experiment was not successful as swathes of new air services were started once the regulatory barriers were removed, stifling the need for such secondary hubs and leading to the abandonment of the pooled services that had opened the door for Aer Lingus in the first place. Another example was Air Portugal, which launched European services from Lisbon Airport via intermediate points at which it automatically had fifth freedom rights as a consequence of the first package of reforms, for example Lisbon-Amsterdam-Hamburg. Again, they were only sustainable for a short period, until the regulations were relaxed further, and eventually allowing any airline to operate anywhere.

Although all this happened 20 years ago there might be some useful success indicators Estonian Air could glean from these early examples of multi-sector short-haul services in similar or different markets. The operational scenario now is quite different. Total deregulation, now in its 14th year, has still left schedule gaps that the airline thinks it can exploit in a fashion that was prevalent two decades ago, but the critical success factors remain the same.

Other, and current, examples of multi-sector activity include airberlin with its "hub" at Palma de Majorca (though that is more in the way of a ‘sixth freedom’ operation) and Icelandair, which operates a circular route from Keflavik Airport via Glasgow and Manchester (with UK cabotage traffic rights that are not taken up) and back to Keflavik, where it connects to and from trans-Atlantic flights (to aggregate sixth freedom services), an unusually innovative arrangement in an industry that has become dominated by point-to-point.