The power of an airline’s network

Network optimisation continues to be a key revenue generator for carriers, with technological and data advancements injecting a new level of sophistication in to the practice. [By Nawal Taneja]

In my last column (Airline Leader Issue 26), I wrote about the overwhelming power of an airline’s network in the generation of total revenue – that about 80% is attributable to network management. A number of airline executives responsible for network have since been in touch with me to elaborate on the point I made, namely, that we must not overlook the value of proactive customer management (e.g. revenue management and customer experience). While this is true, the fundamental characteristics of an airline’s product continue to relate to its network, and exploitation of network characteristics. We need look no further than the successful expansion of the LCCs and newer-generation network airlines, particularly from the Gulf, and also the recent realignment of Japan Airlines’ network and fleet. What is different, and this is very significant, is a new level of vision and intuition and a new type of data and technology that are now used to optimise an airline’s network.

Traditionally, airlines have used five types of basic input in the analysis and planning of their network, fleet, schedules (frequency, capacity, and times of departures and arrivals) and cabin configurations. The most important input has come from the size and seasonality of the O&D traffic. The second input relates to market demographics; the third competitors (schedules and frequency); the fourth partners (interline initiatives); and the fifth local sales teams in each market.

While these five considerations are still important, the role of each factor has been evolving significantly and technology has changed to enable optimisation to be at the enterprise level and from a system perspective as opposed to a functional level and on a piecemeal and sequential basis. 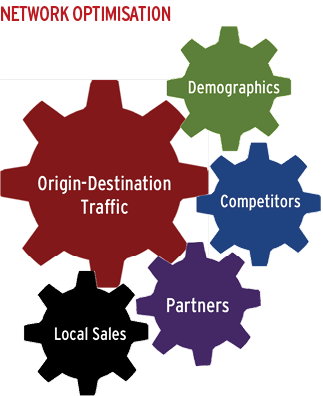 Let us start with the size of the O&D market. While this will continue to be an important factor, the experience of LCCs and the new players based in the Gulf suggest that the market has the potential to be developed to incredible levels, while being ready to respond to new marketing. Many LCCs started service in markets, often at secondary airports, where the reported O&D traffic was insignificant. Yet by offering service they developed those markets – for example, Southwest in the US, Ryanair in Europe, Azul in Brazil, and Spring Airlines in China. Similarly, Emirates Airline’s entire network, fleet and schedules could hardly be considered to be built around the traffic to and from Dubai.

As for demographics, they clearly have been and will be changing in emerging markets. A few carriers are aligning their networks radically to capitalise on the opportunities. For example, the planned capacity of IndiGo within the Indian domestic market is almost double the capacity offered by Air India and more than the total capacity offered by all other LCCs combined – SpiceJet, GoAir, AirAsia, Air Costa and Vistara. Also, the planned capacity of Emirates to and from India is likely to approach that of Jet Airways. On the other hand, it is interesting to note the lack of planned expansion by carriers such as Air France-KLM to and from India, compared with the Lufthansa Group of airlines for example, or planned expansion by carriers based in China or India between the two countries. Would it not make sense for the two main international carriers based in India, or the four main international carriers based in China, to start developing networks between the two largest emerging markets?

Continuing with the changing importance of demographics, it is now important to consider the value, and not just the number, of customers in a market. This customer value goes beyond passenger yield or average fare or even wallet share. Customer value also includes aspects of loyalty and advocacy in social media platforms. A passenger buys tickets on an airline that has 80% of the flights out of a given airport. Is that considered loyalty or patronage? Similarly, a passenger who is likely to be a supporter of an airline’s products and services in social media platforms has much higher value than one who is neither active in social media nor a promoter. Customer value can now be scored and analysed in ways that can play an important role in the analysis and planning of networks and schedules.

It is also important to consider new O&D marketing approaches and technologies. Within a market, demographics and their outlook toward emerging consumer technology can play an important role in dynamic customer acquisition, growth and retention, supported by agile business and customer intelligence. In other words, some markets may not just have a greater proportion of business travellers but a new generation of travellers who have greater expectations from the use of consumer technology. They may require and respond to different marketing value propositions. It is worth considering how people, including those residing in emerging markets, use their mobile phones to access information relating to travel and even pay for travel products and services.

Then there is the expanding role, and changing nature of, partnerships. In the formative days there were interline partners, followed by codeshare partners, and most recently, alliance partners. Now, there are joint venture partners and equity partners. These new partnership arrangements make a big difference as to how the basic network-related product is aligned in a given market, which then significantly affects the outcomes of revenue generating efforts. For example, Delta must execute its trans-Atlantic network with care now that it has acquired equity in Virgin Atlantic, essentially competing with fellow SkyTeam alliance founder Air France for the same global traffic flow in key markets.

The competitive analytics are changing as well. First, airlines that were not considered serious competitors are now serious competitors. Not too long ago major US airlines did not consider Southwest Airlines to be a direct competitor as the latter sold the product directly through one channel, in purely domestic short-haul markets, and to and from secondary airports. Now the airline sells through multiple channels, offers long-haul flights, and operates to and from major airports, and in some near-international markets. Additionally, airlines that were partners may now be competitors, or vice versa – for instance the changing relationship between Delta and Alaska Airlines in the US. While they have been codesharing for some time, which way is the relationship headed? India’s powerful conglomerate, TATA, has an interest, along with Singapore Airlines, in Vistara. TATA also has an interest in AirAsia India along with AirAsia. Will the common owner, TATA, consider these two upstarts to be partners or competitors? In Australia, Qantas is still an anchor at oneworld, but is also redefining its network through collaboration with Emirates. 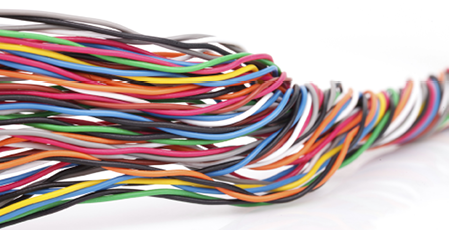 What about input from local sales? In the early days, this played a key role. Frequency and schedules were impacted significantly based on the input and commitment from sales at one or both ends of a market. With the use of centrally based planning systems, input from local sales decreased, leading in some cases to scenarios of “Here is the schedule, now go and sell.” With O&D based revenue management systems, the dynamic between field sales and revenue management is as loaded as ever. Yet changing demographics, and the availability of locally targeted marketing technologies that develop new traffic and defend against emerging savvy competitors, has made input from local sales vital again.

Besides new sources and types of information, network optimisation can now also benefit from the availability of more advanced analytical techniques. In the past, market selection, capacity, frequency, schedules, and so forth had to be performed on a piecemeal and sequential basis due to technological limitations. Then adjustments were made, almost always manually, for constraints such as airport slots and noise restrictions. Then there were also maintenance and crew assignment considerations, not to mention day of week schedule changes to allow for peaks and troughs. Now with improvements in optimisation techniques, including computation power and speed, it is possible to perform simultaneous optimisation processes.

With the availability of more precise data on customers and customer-centric forecasting techniques, it is now also possible to undertake targeted network, fleet and schedule planning. Knowing that passengers travelling in premium cabins generate a disproportionate percentage of the revenue, it is possible to introduce cabin profitability in the network-fleet-schedule-cabin configuration optimisation process.