You have to be in it to win it. That mantra of Asia’s air freight industry is more apparent after Thai Airways’ late Mar-2015 exit from the sector. Thai confronted many challenges and its exit of only two dedicated freight aircraft is small but underscores changes in Asian air cargo.

Thai only operated converted 747 freighters, which provided a quick fix during the last cargo boom but have inherent inefficiency, and peers are phasing the type out. Thai lacked the advantageous North Asia geography and hub power of Cathay Pacific and Korean Air. This is important for the North America market, which Asian freighters focus on with some lift from passenger bellies.

Thai's core long-haul passenger market is between Europe and Asia, but supplementing this with freighters is difficult as Gulf carriers are strong competitors. Gulf carrier flights to Asia have increased from 28 a day in 2010 to 52 in 2015, compared to Western Europe-Southeast Asia flights increasing only from 57 a day to 61.

Thai's freighter services ended 29-Mar-2015. In 2014, Thai's dedicated freighter network only covered the long-haul points of Amsterdam and Frankfurt. Stopovers, most commonly in Delhi, allowed other cargo to be picked up, but Thai mostly operated a point-to-point cargo network that heavily overlapped with its business passenger business.

Thai's home airport of Bangkok has lost momentum as a cargo hub with 2014 and 2013 volumes down compared to growth at Hong Kong and Seoul Incheon. There is little impact on cargo volumes from the rapid growth at Bangkok Don Mueang, which now handles most LCC traffic in Bangkok, as almost all movements at Don Mueang come from narrowobody aircraft. 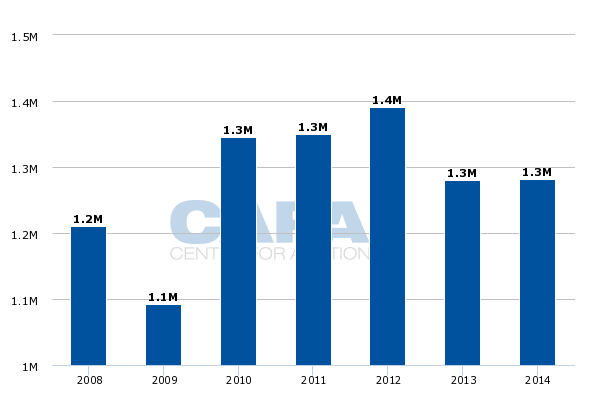 Source: CAPA - Centre for Aviation and Airports of Thailand PLC 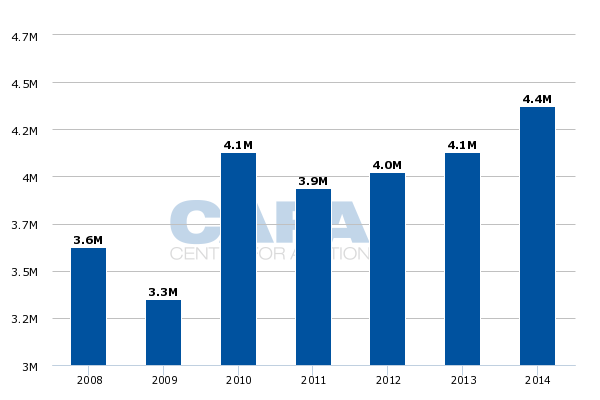 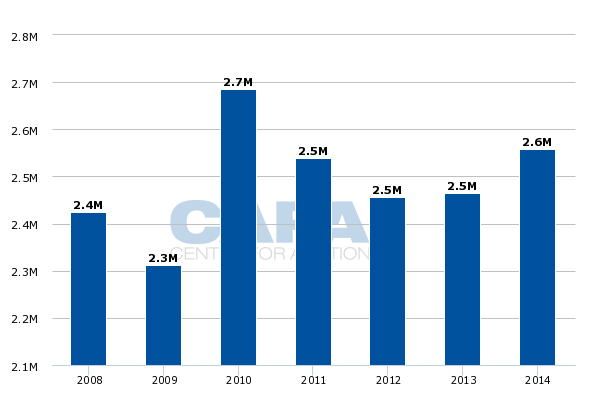 Singapore Changi long ago has lost cargo momentum with flat performance since 2008. But perhaps some credit is due that Changi has been able to maintain volumes rather than see them shrink, as occurred at Bangkok. 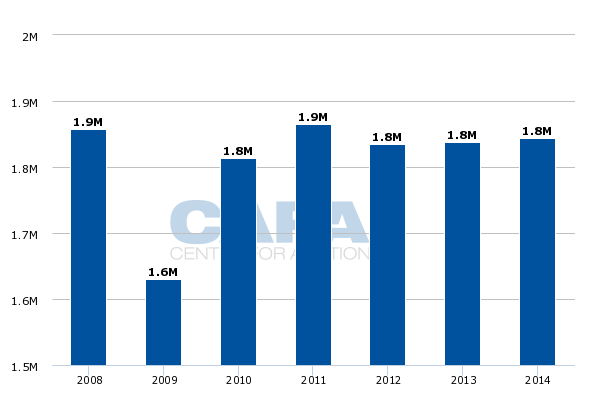 Thai Airways lacked geography to be a strong cargo hub

Asia’s dedicated freighters mostly concentrate on the market to North America with regional Asian services. These intra-Asia flights largely support feeding a cargo hub for onward North American traffic or the flights help move components around as they become assembled, with this latter activity concentrated around North Asia, making Thai’s Bangkok hub circuitous for this.

As for long-haul cargo markets, Thai has a minimal presence in North America with four weekly flights to Los Angeles (via Seoul Incheon). Regional peer Singapore Airlines operates more dedicated freighters and also has a much larger presence with passenger flights.

The effectiveness of SIA’s cargo division is certainly questionable as SIA Cargo continues to post losses. But there should be some caution with the figures as the precise accounting depends how revenue and costs are shared with the larger passenger aircraft operation.

SIA, through early and extensive liberalisation, has been able to have significant access to North America. Anchorage, Dallas and Los Angeles feature in its top 10 ports for dedicated freighter service based on ATKs. Singapore has a notable network through India and the Middle East with some presence in Europe. 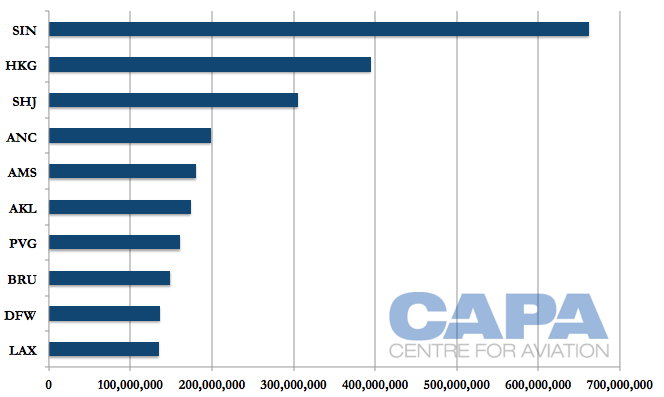 The only other main cargo division at a Southeast Asian carrier is Malaysia Airlines. Its MASkargo division primarily uses A330s, with the type's shorter range reflecting its more regional focus whereas SIA is more intercontinental.

MASkargo top 10 destinations based on ATKs: 2015 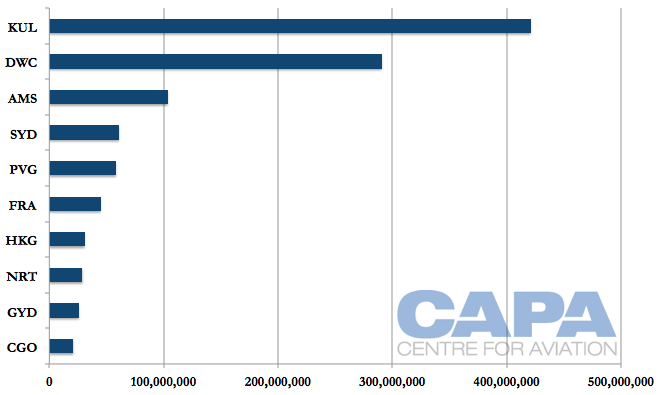 North Asian freight divisions are not reporting enviable results, but their steadiness and optimism contrasts to Thai’s freighter withdrawal. A key difference is that those North Asian carriers have the North America market.

Korean Air in 4Q2014 reported 47% of cargo revenue came from the Americas. Europe was a smaller 25%. 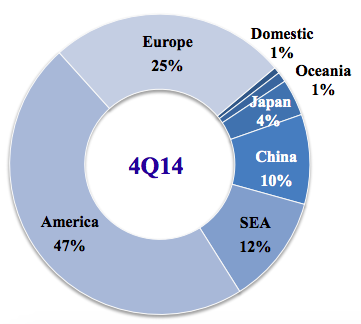 Cathay Pacific and China Airlines see various North American ports as their top cargo destinations based on AFTKs, according to OAG data. (This includes theoretical capacity that may not be commercially available.) 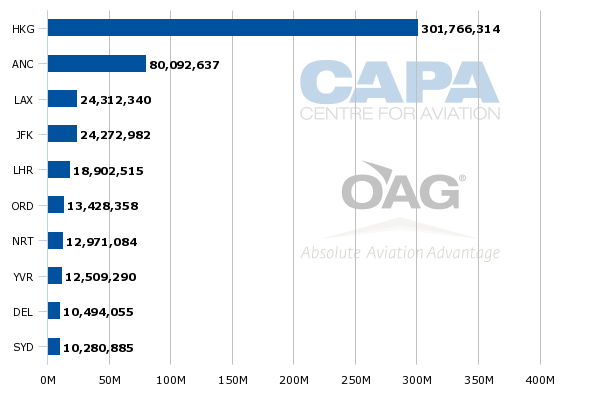 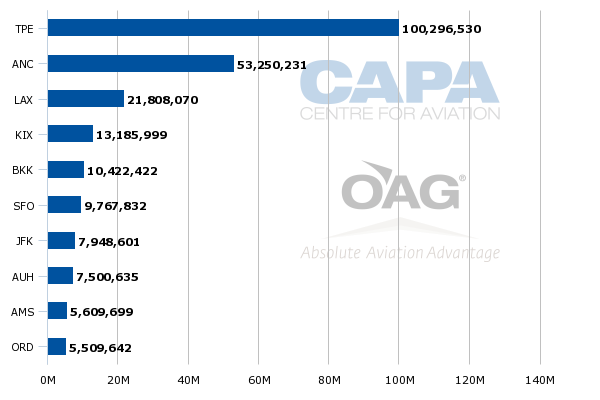 A strength for North Asian cargo operators is that there are no intermediary hubs between North Asia and North America. This is unlike the Asia-Europe market where the growth of Gulf carriers has greatly added to passenger belly supply. The Gulf carriers have also increased the range of European cities that can be accessed with belly space; previously some cities would have relied on surface transport or dedicated freighters, which operate at a higher cost to belly space.

The closer distance between Europe and Asia means more passenger aircraft belly space can be used. This compares to passenger services from Asia to North America that may not be able to carry cargo to the east coast and could be limited to the west coast, creating a market for dedicated freighters.

Thai’s freighter fleet consisted over the last couple of years of only two aircraft, both 747s. Previously Thai supplemented its freighter fleet with wet-leased capacity, including 777Fs operated by Southern Air Cargo.

Thai was able to have some scale by pairing the fleet with its 20-odd passenger 747s. However, as part of its restructuring Thai is accelerating the retirement of its passenger 747s. As CAPA wrote in a 26-Mar-2015 analysis report on Thai's overall fleet and network restructuring, which includes the suspension of freighter services and capacity reductions to Europe:

The previous fleet plan did not earmark the 747-400 fleet for retirement until the end of the decade, with an initial two aircraft slated to be phased out in 2017. But as CAPA highlighted in Apr-2014, Thai had been looking previously at moving up four to six 747-400 retirements to 2015. The airline’s new management team has accelerated this further and is now aiming to phase out 10 747-400s in 2015, including eight passenger aircraft and its only two freighters. This would leave Thai with only four remaining 747-400s. The difference of course is that SIA and Cathay have scale on those freight fleets whereas Thai with two freighters did not. Nor would it have been practical to consider expanding dedicated freighter operations given market over-capacity and Thai’s structural disadvantages.

Malaysia Airlines operates two 747-400 freighters without any passenger 747s in service, although two passenger -400 variants are in storage. While MAS would be challenged to get efficiency on its 747 freight fleet, the average age of its 747 freighters is only nine years. MAS' 777-200s have an older average of 15 years.

Freight 747s in operation in Northeast/Southeast Asia and comparable passenger/combi units: as of 2-Apr-2015

Thai’s freighter fleet situation was further hampered by Thai operating 747-400BCFs. These conversions were a quick fix to gain cargo lift during the 2010 boom but in the ensuing downturn quickly fell out of favour.

The conversion has inherent operating disadvantages that were exacerbated by the rising cost of fuel and over-supply in cargo capacity. Thai's freighters averaged 25 years old, making them the oldest aircraft in its fleet. 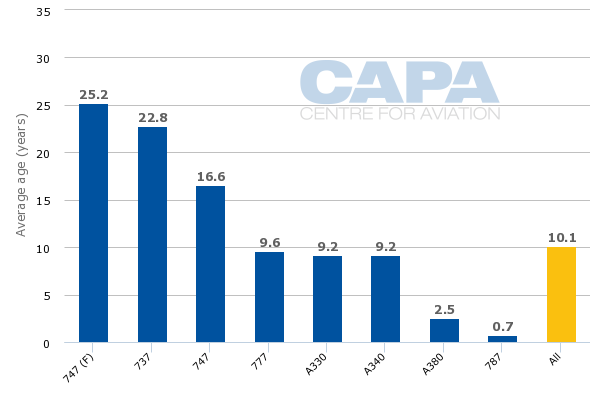 Asian airlines have moved quickly to withdraw converted long-haul freighters, and it is expected future converted freighters will be concentrated on short-haul sectors.

CAPA's Fleet Database tracks 54 747-400 converted freighters. Of these 54, only 26 are currently in service. One has been destroyed, two have been retired and 25 are now inactive (including the Thai's two aircraft).

Globally, the largest 747-400 converted operators are Kalitta Air with six in service and Atlas Air with five in service. Aircraft ages are typically 20-25 years old. Oriel's average appraisal is USD9 million although some have an appraisal as high as USD10 million or as low as USD7.5 million.

Outlook: the strong get stronger

Over-capacity remains in the cargo market and Thai's exit will not have a significant impact. But its withdrawal and changes (exit or reduced capacity) from other carriers will help strengthen the existing large players, the likes of Cathay Pacific, Korean Air and China Airlines.

There are not bigger rewards up for grabs, not yet at least, but the requirements have grown: minimum connecting times must be reduced and sensitive cargo must be handled, to name some. This is a taller order than before and airlines must be committed – with capital and management resources – to the cargo sector if they are to be in it.

In Asia there will be some niche cargo operators: those operating wholly within the region or those that have secured favourable traffic rights (for example, Qantas from China to the US). But mostly there is consolidation.

The hope is the removal of capacity will help cargo carriers, but they face external threats and a much more volatile environment. The passenger side of the business starts to look good.