The Myanmar-Singapore market is facing potential over-capacity as more flights are added, led by low-cost carriers. Tigerair launched services to Yangon in Oct-2013 while Jetstar Asia and Golden Myanmar have both unveiled plans to add capacity on the Yangon-Singapore route.

Passenger numbers between Myanmar and Singapore have increased by about 50% over the last two years. But capacity levels are now up nearly 100%.

Without a waiver of current visa restrictions it is unlikely the market will be able to absorb the additional capacity. Singapore has not approved a proposal from Myanmar to lift visa restrictions although Myanmar is the only Southeast Asian country for which Singapore requires visas. A visa free environment is particularly important for the LCCs, which are eager to stimulate demand on the Yangon-Singapore route.

This is the second in a series of reports on the dynamic Myanmar market. The first report looked at Myanmar’s largest international market, Thailand, where capacity has also grown at a much faster clip than passenger growth. But Thailand has approved a proposal from Myanmar to lift visa restrictions which should lead to increased demand. Singapore is the second largest international market for Myanmar.

Myanmar has proposed transitioning to visa-free policies with all ASEAN members. Currently Myanmar only allows Vietnam citizens to enter without visas but Myanmar has been negotiating visa waivers with several other ASEAN countries including Indonesia, Thailand and the Philippines. Thailand appears the closest, with a deal expected to be finalised by the end of Nov-2013 and visas for trips of less than 14 days from citizens of either country to be waived by the end of 2013.

Singapore has so far not responded to Myanmar’s proposal and is believed to be not willing to lift visa requirements on Myanmar citizens. Singapore’s reluctance is somewhat surprising as it does not require visas from any other ASEAN country.

Passenger traffic between Myanmar and Singapore increased by 23% in 2012 and by a further 28% in the first three quarters of 2013. For the full year 2013 the number of passengers flying between the two countries will exceed half a million for the first time.

But capacity in the market has increased at an even faster clip. Total capacity between Yangon and Singapore, the only route between the two countries, is expected to soon exceed 10,000 weekly one-way seats, representing growth of over 100% compared to two years ago.

Based on current schedules, there will be over one million seats on the Yangon-Singapore route in 2014. But without the lifting of visa restrictions it is unlikely the market will be able to support more than 650,000 passengers. 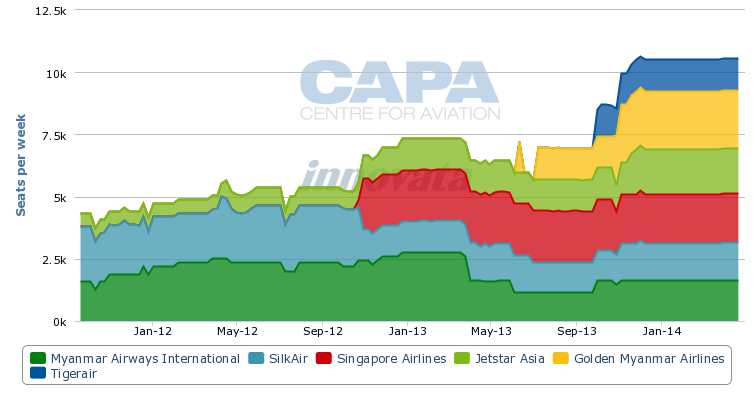 Myanmar and Singapore have close economic and business ties which remained in place while Myanmar was under sanctions from the EU and US. There is considerable and growing investment from Singaporean companies in Myanmar. There are also a large number of Burmese migrant workers in Singapore. But with the current visa requirements traffic flows between the two countries are much smaller than they should be.

Myanmar is emerging as a popular tourism destination. But it is hard for Myanmar to attract Singaporean tourists as they can enter any other country in Southeast Asia without a visa. Singaporeans take frequent short holidays, often with LCCs, which have successfully stimulated demand, particularly in the short-haul market.

LCCs now account for almost one-third of capacity in the Singapore market, compared to virtually zero a decade ago, and over 50% of capacity between Singapore and other Southeast Asian countries. But the cost and hassle of getting a visa for a short holiday makes Myanmar a less attractive destination compared to other countries in Asia. There were less than 20,000 Singaporean visitor arrivals in Myanmar in the first seven months of 2013.

Singapore is also an attractive holiday destination for Myanmar’s middle and upper classes, particularly for shopping. But Singapore competes with Bangkok for short holidays and as Thailand lifts visa requirements, Singapore will be put at a competitive disadvantage. The Yangon-Bangkok and Yangon-Singapore markets are now both well served by LCCs, making short holidays affordable but the extra hassle and cost of a visa can limit the ability of LCCs to stimulate new demand.

Jetstar was the first LCC to serve Myanmar

Jetstar Asia was the first LCC to serve Myanmar, initially launching services to Yangon in 2005. Jetstar Asia has had a partnership for several years with full-service carrier Myanmar Airways International (MAI), which now includes a codeshare and previously included Jetstar wet-leasing an A320 to MAI.

Jetstar Asia’s increase in capacity to Yangon could be seen as a response to the entry of two LCC competitors. Singapore became Golden Myanmar’s first international destination in early Apr-2013, when the carrier launched one daily A320 flight on the Yangon-Singapore route. In early Oct-2013 Golden Myanmar filed six additional weekly flights to Singapore, for a total of 13 frequencies. (The carrier initially planned to begin the additional frequencies to Singapore at the end of Oct-2013 but it is not currently selling tickets for the new second flight although it is already included in the Innovata schedule database and on the carrier’s own website.)

Tigerair meanwhile launched one daily flight to Yangon on 1-Oct-2013. Based on the schedules currently filed, there will be 30 weekly LCC flights from Yangon to Singapore in Dec-2013, providing 5,400 weekly one-way seats. One year ago there were only seven weekly LCC flights in this market and two years ago there were only four weekly flights, providing just 720 weekly one-way seats. LCCs currently account for about 44% of total capacity in the Yangon-Singapore market compared to only about 14% one year ago. Based on the current schedules for Dec-2013, the LCC penetration rate will reach about 51%.

Without the lifting of the current visa requirements, it is unlikely the 5,400 weekly one-way LCC seats that are planned for the Yangon-Singapore market can be absorbed. There will need to be capacity adjustments.

LCC load factors on Yangon-Singapore route have not been stellar

The entry of Tigerair on 1-Oct-2013 and the prospect of more capacity from Golden Myanmar could lead to even lower load factors for Jetstar Asia, particularly as the carrier is about to expand capacity on the route by 43%. Jetstar is likely adding capacity on the route in an attempt to cement its position as the leading LCC on the route and leverage its first mover advantage.

Golden Myanmar also has struggled in the Yangon-Singapore market, with an average load factor of only 40% in the first six months of operating the route. The low load factor is not too surprising given it was the carrier’s first international route and the fact it was launched at the beginning of the off-peak season. But it indicates how challenging the market is, even before the recent surge of additional LCC capacity.

Golden Myanmar carries mainly point-to-point passengers that are originating in Myanmar. Its traffic flows have not been balanced, with 15,723 passengers carried from Yangon to Singapore in the first three quarters of 2013 but only 9,636 passengers carried on the return leg from Singapore to Yangon. This indicates a large volume of migrant worker traffic.

Golden Myanmar is unlikely to succeed at attracting a large share of the Singapore origin market as its brand is not known outside Myanmar. But it would benefit significantly from the waiver of visa free restrictions as more Myanmar citizens would take the opportunity to holiday in Singapore or visit Singapore for more frequent shopping or medical trips.

Jetstar and Tigerair are better positioned to tap into the Singapore origin market although again growth in this market is restricted given the current visa requirements. Jetstar and Tigerair, however, benefit from offering connections, including to Indonesia and the Philippines where visa restrictions are more likely to be waived. Neither Indonesia nor the Philippines is served non-stop from Myanmar, leaving Singaporean carriers to compete with Thai and Malaysian carriers for one-stop traffic.

SIA remains the market leader but load factors are under pressure

Singapore Airlines (SIA) would not be as impacted by the visa issue as it carries a much larger portion of transit passengers than Jetstar or Tigerair. But the SIA Group has added a significant amount of capacity into the Myanmar market since Oct-2012 that has not yet been completely absorbed. The intensifying competition in the local Myanmar-Singapore market is making it challenging for SIA to fill up the extra capacity. (Expansion into Myanmar from other countries, including the launch of services by several North Asian carriers, has also resulted in increased competition for the SIA Group in connecting Myanmar with markets beyond Singapore.)

SIA mainline launched services to Yangon just over one year ago, on 28-Oct-2012, taking over seven of the 16 weekly Singapore-Yangon frequencies that had been operated by its regional subsidiary SilkAir. SIA served Yangon with 323-seat 777-200s until 27-Oct-2013, when it switched to 285-seat A330-300s.

The switch to the smaller A330-300 is an indication that SIA has had some challenges filling up the 777 on the new Yangon widebody service. In the first three quarters of 2013, Singapore Airlines carried 176,358 passengers to and from Yangon. As it operated 546 flights during this period, its average load factor was only 64%.

SilkAir also has seen a drop in load factor in the Yangon market over the past year although an exact figure cannot be calculated as the carrier uses a mix of A319s and A320s on the route with seasonal fluctuations. (Its A319s seat 128 passengers and its A320s are in two configurations seating 142 and 150.)

Despite the drop in load factors SilkAir has continued to add capacity to Yangon since handing nine of its 16 weekly flights to SIA in Oct-2012. The carrier now operates 11 frequencies, up from nine a year ago, including four with A319s and seven with A321s, according to Innovata data.

MAI is the only other full-service carrier in the Singapore-Myanmar market. It currently operates 10 weekly non-stop flights on the route but previously served Singapore with three daily flights, including two non-stops and one via Bangkok.

MAI has struggled in the market as the Singapore-based carriers and Golden Myanmar have expanded. MAI’s traffic on the Yangon-Singapore route dropped by 21% in the first three quarters of 2013 to 73,999 passengers. At the same time the number of flights it operated dropped by 10%, indicating a drop in load factor.

MAI has seen its share of traffic in the Yangon-Singapore market slip over the past year from 33% to 20%. The carrier currently accounts for about 19% of capacity on the route but this will drop further as the LCCs in the market continue to expand. MAI, like all the carriers in the Myanmar-Singapore market, would benefit from the lifting of visa restrictions.

The Myanmar-Singapore market has huge potential in terms of local demand as well as for connecting passengers. Myanmar has been one of the fastest growing markets for Changi Airport, with a 23% surge in traffic in 2012 followed by the 28% growth recorded in the first three quarters of 2013. Double-digit growth will almost certainly continue in 2014. But if Singapore gave Myanmar the same status as the other eight ASEAN members and lifted visa requirements, the growth would be much, much faster.