Ryanair in the dock

Ryanair may have to repay millions of euros as Germany’s highest court ruled fees it has received to operate from airports may amount to subsidies in breach of EU competition rules. Lufthansa and airberlin have been awarded the right to pursue legal action accordingly. Together with the other difficulties the Irish airline faces in Germany could this be the beginning of the end for its operations there? Or might there be even more significant outcomes?

In mid-Feb-2011, Germany's Federal Court of Justice stated it has awarded Lufthansa and airberlin the right to pursue legal action over subsidies given to Ryanair. The two German airlines allege the subsidies came in the form of lower airport charges at Frankfurt Hahn and Hamburg Luebeck airports. The European Commission is also currently investigating allegations the Irish LCC enjoys subsidies at other German airports. Ryanair maintains it never sought or accepted state aid.

Potentially, Ryanair may have to repay millions of euros; not the first time it is has done so, the most famous case being at Belgium’s Charleroi/Brussels South airport in 2004 (EUR4 million). The circumstances then were similar, with the European Commission ruling that discounts on landing fees and ground handling services at the (then) publicly owned airport south of Brussels should be repaid because they could be classified as illegal subsidies under European Union antitrust rules. That ruling prompted Ryanair to reduce some services at Charleroi (notably London) for a while though it has since built the base (its first ever in mainland Europe) back up, to the point where it now serves no less than 69 cities. The London routes were never reinstated.

Ryanair appealed the decision, as it always does. Such appeals can last for two years or more and it was not until 2008 that the EU General Court, the second highest, cancelled and overturned the annulment of the Ryanair/Charleroi subsidy agreement.

The most prominent in a raft of such disputes

Until now, this was the most prominent in a series of disputes between the EU and Ryanair, alongside probes into eight other airports around Europe, including Finland’s Tampere Pirkkala Airport, Aarhus Airport in Denmark, Alghero Airport in Italy, Pau Airport in France, Bratislava Airport in Slovakia and the German airports Frankfurt-Hahn, Berlin Schoenefeld and Hamburg Luebeck.

In this latest instance there is a further complication in that it appears that Lufthansa and airberlin, as plaintiffs, may be given the right to sue Ryanair directly for loss of income that they allege is a result of subsidies given to airports in Germany where neither operate (Frankfurt Hahn and Hamburg Luebeck). It is no longer a case of Ryanair merely repaying subsidies.

Lufthansa stated: “We expect that it will become more difficult for Ryanair and smaller airports to profit from illegal subsidies and distort competition in the air travel industry. We consider the court's decision to be a success."

There is some confusion, still, as to how the state support rules are applied to airports that may not be entirely in the public sector. Charleroi’s airport has attracted minority investment from Italy’s SAVE since the 2004 case. Frankfurt Hahn airport was partly (65%) owned by Fraport, itself a partially publicly listed and partially Lufthansa-owned entity until it sold its stake to one of the two Länder (Federal States) that were co-investors, in 2009. Hamburg Luebeck airport was 90% owned by Infratil Europe, until it sold the shares back to the municipality because of a failure to reach traffic targets, also in 2009.

What can be perceived from these transactions is that these new "subsidy" issues mainly concern airports that have come back into the fold of the public sector, reversing two decades when the trend was in the other direction.

What does that mean for Ryanair? There are a number of options it could take.

Firstly, it could adopt a do-nothing scenario and just ride out the storm while it commences another round of appeals. Ryanair is in the highest league where legal appeals are concerned, as it has access to leading lawyers who are easily financed from a huge cash reserve. This option is somewhat less likely on this occasion, however, because of the likelihood of additional and costly direct action by the appellant airlines.

Secondly, it may review its usage of publicly owned secondary level airports. If it is the case that Ryanair is extracting similar deals at most or even all of these airports (and the complaints by airports in France and Spain, below, indicate that is so) then this case in Germany will inevitably have knock-on effects across Europe. Towards the end of 2010 CEO Michael O’Leary and other executives made guarded reference towards Ryanair changing its strategy in respect of primary airports (it may begin to make more use of them) and of always being the cheapest carrier (it may focus more on yield). Counter-statements were also made by other executives, as is, again, often the case with Ryanair, a master deployer of smoke and mirrors, but it is conceivable the original statements might have been made in anticipation of this court ruling.

The disputes with airports throughout Europe that are current, mentioned above, and primarily over issues concerning subsidies and changes of administration, include the following:

In addition, Ryanair has, or recently had, running disputes with the Catalan and Andalucian governments in Spain over court decisions that challenged Ryanair’s right to charge EUR40 to print out a boarding card for any passenger who tries to check-in without a pre-printed one. In France, Ryanair is just starting to increase its presence again at Marseilles Airport after closing its base there in Jan-2011 in a dispute over work contracts, while in Ireland it is reported to have paid USD6.5 million to the Dublin Airport Authority to settle a legal action relating to the breach of a five-year contract with Shannon Airport on passenger charges.

All in a day’s work

It would be easy to refer to these disputes as all in a day’s work for the ultra combative and cost-focused carrier but the common theme throughout is that all these airports are public-sector managed. Moreover, the real threat, as previously stated, comes from the subsidies issue. Ryanair may opt to quit publicly operated secondary airports in favour of private ones where the competition rules don't apply to the same degree, though the regulations are not totally transparent.

Thirdly, those public airports themselves might decide Ryanair just isn't worth the problems it creates, in terms of low (or even zero) income from both aero and non-aero sources; demands from other airlines to receive the same terms; the likelihood of being drawn into unwelcome legal disputes; and the fact that when Ryanair withdraws from routes, or entirely from an airport, it sends out a subliminal message that no other airline has a chance of making those routes pay (even if that is not the case in reality).

Fourthly, Ryanair could demand a root and branch review of the competition rules on state aid in the European courts. That would open a bigger can of worms.

Fifthly, Ryanair decides that operating within Germany is no longer economically viable. The rationale for this option is that in few other countries has there been as much resistance, right from the word go, to Ryanair from a state/legacy/network airline as there has been from Lufthansa, which is now joined by airberlin, an airline that until recently might have classified itself in the same bracket as Ryanair but is now shifting distinctly into the network operator zone, joining the Association of European Airlines and preparing to join the oneworld alliance. Collectively they are a super heavyweight wrestling tag team and a match for anyone.

On top of that is the continuing problem of the German aviation tax, which was introduced on 01-Jan-2011 at rates varying from EUR8 to EUR45. The Association of German Airlines forecasts the ‘eco-tax’ will prevent five million passengers from flying in 2011 and 2012  The German government is expecting to raise USD1.3 billion annually with the new tax.

In Oct-2010, Ryanair announced it would cut 30% of flights, resulting in the loss of one million passengers at its Frankfurt Hahn base (one of the subjects of the subsidies case) from summer 2011 following the introduction of the tax. The following month CEO O’Leary warned it might make further cuts at its German bases in 2011 for the same reason, listing Niederrhein (Dusseldorf Weeze), Bremen and Berlin Schoenefeld as airports that may be affected. Reports from Germany hint that Weeze may be experiencing some financial difficulties because of its reliance on Ryanair. 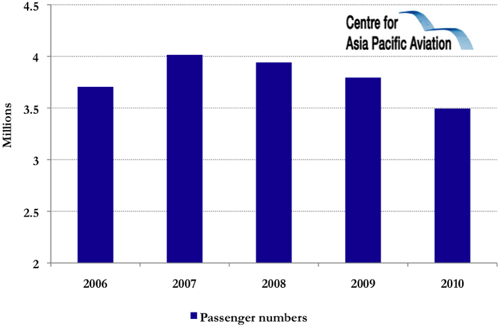 Ryanair’s German operations are currently centred on Hahn, Weeze and Bremen (all bases), also Hamburg Luebeck, Berlin Schoenefeld, Altenberg, Memmingem (Munich West), Karlsruhe-Baden and, from Mar-2011, Magdeburg. Three bases in a heavily industrialised country of 82 million people, does not amount to much. Spain and Italy both have eight, while even Ryanair's much-maligned UK has 10.

Another problem Ryanair has experienced in Germany – and one it might not have anticipated – is a peculiar lack of any propensity to travel amongst the indigenous population in some parts of the country, and this despite the fact that Germany is leading strongly the rest of Europe out of recession. Bremen, a base and an airport where Ryanair even invested in its own terminal, is often mentioned in this respect.

Ryanair has been scaling down its operations in the UK and Ireland over a period of years, with excessive taxation the primary reason given, and in favour of countries like Spain and Italy. But perhaps the airline would do well to remember that even in the midst of a financial nightmare (Ireland) and a post-recession (just) limbo (UK), citizens of both countries have such a travel ‘propensity’ that they will sell their children into slavery before they give up their cheap air holidays.

Finally, all of the above.

During the last decade, when the secondary and tertiary level airports throughout Europe emerged to cater for the demands of aggressive and very fast-growing LCCs, airports and airlines got very close, too close perhaps. Business was all too easily bought with insubstantial promises and both parties have tended to lose sight of the fact that, first and foremost, they exist to satisfy the needs of the passenger. It could be argued that this bonding got out of hand, became blurred and that the end result, legal proceedings, was inevitable. The latest court decision might well turn out to be the tipping point that will lead to a new era of more realistic contracts between two sides of the equation, for the ultimate benefit of the third.