Ryanair and Aer Lingus: will the UK CC’s order bring down the curtain on this Irish farce?

Those who attended Aer Lingus’ investor day in London in Sep-2011 will recall the drama of Christoph Mueller’s physical response to Ryanair’s CFO Howard Millar’s questioning on a number of topics. The Aer Lingus CEO stood to face Mr Millar as he spoke, fixed him in the eye and slowly moved towards him until the two were almost brow to brow.

This confrontation serves as a metaphor for the relationship between Aer Lingus and its largest shareholder. The irresistible force meets the immovable object.

Now the UK’s competition authorities have ordered Ryanair to sell its 30% stake, because its holding “had led or may be expected to lead to a substantial lessening of competition between the airlines … between Great Britain and Ireland”. Ryanair’s three bids for Aer Lingus were opposed by Aer Lingus, its employees, the Irish Government and the European Commission and consumed significant management time and effort. Rather than pursue it further, perhaps now it should cut its losses and concentrate on what it does best: beating competitors in the market place.

The Competition Commission had a number of concerns

In a 354 page report published on 28-Aug-2013 on its website, the UK’s Competition Commission (CC) recognised the European Commission’s view that Ryanair and Aer Lingus compete “intensely” and that competition between them is at least as intense now as it was in 2006, when Ryanair first took a stake in Aer Lingus.

Nevertheless, the CC felt that the tension between Ryanair’s position as a competitor and as a shareholder could provide it with an incentive to weaken Aer Lingus. The CC had a number of concerns, the most significant of which we look at in this report.

Ryanair could prevent Aer Lingus combining with another airline

First, the CC felt that Aer Lingus’ commercial policy and strategy was likely to be affected by Ryanair’s minority shareholding, in particular because it was likely to impede or prevent Aer Lingus from being acquired by, or combining with another airline.

It is almost certainly the case that Ryanair’s stake has discouraged other airlines from bidding for Aer Lingus – at least one unnamed carrier reportedly withdrew from merger talks when Ryanair launched its third takeover bid last summer – but it is far from clear that the Irish national carrier has attracted realistic interest from any of the major carriers over the years.

Aer Lingus’ (redacted) submissions to the CC reveal that it had also been in talks with at least two other airlines, one of which could have led to estimated cost synergies of GBP30-50 million. Talks about possible mergers, acquisitions, joint ventures and other forms of cooperation are commonplace in the airline sector and the ultimate test of genuine interest is when an actual bid emerges.

In a submission to the CC, IAG said that Europe’s Big Three legacy flag carrier groups “would probably not be interested in acquiring Aer Lingus at the moment.” Lufhansa said that Aer Lingus’ strong position in its home market would “in general probably make it an attractive takeover target for airlines”, but added that it “had a difficult shareholder structure”. According to Air France, however, “Ryanair’s presence as an existing shareholder in Aer Lingus was not considered a deterrent to another airline acquiring an interest in the airline”. Ryanair’s holding has not prevented Etihad from taking a stake of just less than 3%, taken in 2012.

Moreover, Ryanair has sought to address the CC’s concern in this area by offering to sell its stake to any carrier that secures a majority of the shares in Aer Lingus. Before the CC’s decision was announced, Ryanair is reported to have offered its whole stake to Etihad and previously to have offered it to Lufthansa, British Airways and Air France. In addition, in 2012, Turkish Airlines was linked with a possible bid for Aer Lingus, but chose not to progress with talks.

Presumably the thrust of the CC’s argument in this area is that Aer Lingus is prevented from becoming a stronger competitor through combining with another carrier. Indeed, the CC’s report says “By impeding or preventing Aer Lingus from combining with other airlines, Aer Lingus’s ability to increase the scale of its operations and reduce its unit costs would be limited.”

There is a slight irony that the only airline so far to have shown serious interest in combining with Aer Lingus is Ryanair, which planned to increase its traffic base and to lower its unit costs, but has been prevented from doing so.

Ryanair attempted to pre-empt this concern by saying that it would support any Aer Lingus rights issue by subscribing in accordance with its shareholding. It is worth noting that Aer Lingus has shown no sign of planning an imminent rights issue and it had a gross cash balance of more than EUR1 billion and net cash of around EUR500 million at 30-Jun-2013. Even the CC “found it unlikely that Aer Lingus would need to raise equity in the medium to long term.” 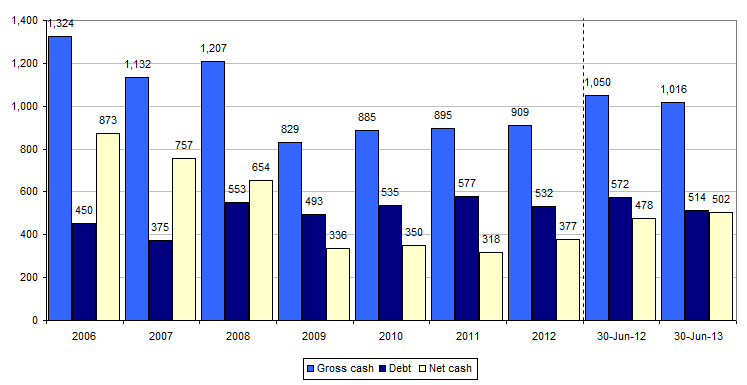 Since Ryanair first took a minority stake in Aer Lingus shortly after its stock exchange listing in Oct-2006, it is difficult to find evidence that it has been weakened financially. While its net cash balance dropped from EUR873 million at the end of 2006 to EUR336 million in 2009, this coincided with the global financial crisis and it has remained stable since then. Aer Lingus’ net cash balance, where most airlines carry net debt, owes much to its use of off-balance sheet operating lease funding of aircraft, but, even after adding capitalised operating leases at eight times annual rental payments to its 2012 year end debt, it would still have had a net cash position of EUR8 million.

As well as having a relatively robust balance sheet, Aer Lingus’ profitability has not visibly suffered as a result of the Ryanair shareholding. Its operating margin fell from a pre-crisis peak of 6.4% in 2007 to -6.7% in 2009 and it was hit more severely than European airlines as a whole (as illustrated by the margins for Europe reported by IATA).

However, in the years 2010 to 2012 it recorded higher margins than the IATA average for Europe. Moreover, while Ryanair continues to have a significantly superior operating margin, Aer Lingus’ 2012 margin of 5.0% was almost within 1ppt of its pre-crisis peak, while Ryanair's remained more than 6ppts lower than at that time. 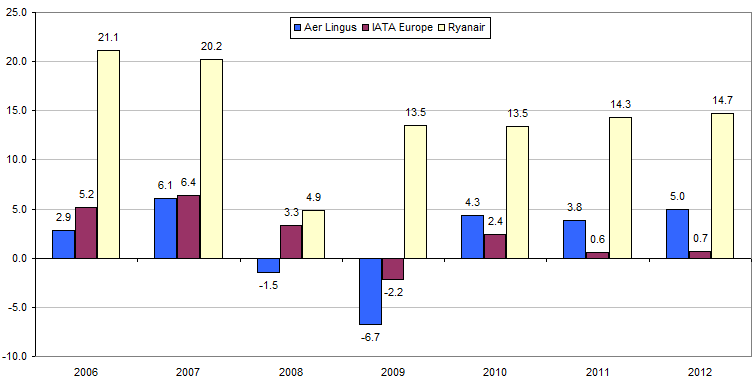 Ryanair also attempted to provide a remedy to the CC’s concern about Aer Lingus’ ability to manage its portfolio of Heathrow slots. At the time of Aer Lingus’ IPO in 2006, the Irish Government sought to protect the carrier’s position at Heathrow, which provides important connectivity for Ireland to the rest of the world, but inserting extra provisions regarding deals to sell slots.

Aer Lingus’ Articles of Association provide than any disposal of its Heathrow slots may need to be approved by a super majority of shareholders in accordance with a complicated formula that would likely allow Ryanair’s 30% to block such a proposal.

Ryanair did not oppose a slot transaction with British Airways earlier this year, although Aer Lingus told the CC that a previous transaction did not proceed when the other airline realised that Ryanair could have an effective veto. In order to address this concern, Ryanair offered to undertake not to vote against Aer Lingus’ board in the event that it sought to dispose of Aer Lingus’ Heathrow slots. Ironically, such a disposal would serve to reduce competition on London to Dublin.

A further concern expressed by the CC was that Ryanair’s presence on the share register increased the likelihood that it would mount further bids for Aer Lingus, “with the associated disruption to Aer Lingus’s ability to implement its commercial strategy”.

The three bids made by Ryanair between 2006 and 2012 certainly resulted in a significant distraction of Aer Lingus management time while fighting the bids, but Ryanair’s close attention could also be argued to have focused Aer Lingus on achieving greater efficiency. Perhaps more to the point, the bids have provided a major distraction to Ryanair management.

The Competition Commission had to decide if a “relevant merger situation had been created”. Essentially, this means deciding whether two parties come under common ownership or control and whether the test of UK turnover or share of supply is met. Ownership/control is assessed in three possible ways: a) the acquirer gains material influence over the target; b) the acquirer gains ‘de facto’ control over the policy of the target; or c) the acquirer gains a controlling interest (‘legal control’).

The CC concluded that Ryanair falls into the first of these categories. In coming to its conclusions, the CC did not have to decide whether Ryanair has in fact exercised material influence over Aer Lingus; rather, it had to consider whether Ryanair has the ability to exercise material influence and concluded that it does, based on its level of shareholding and the possibility of influencing the outcome of shareholder resolutions.

After satisfying itself on the material influence test, the CC concluded that there is a “relevant merger situation”, since the two carriers also meet the share of supply test by controlling more than 25% of the market for passengers between Great Britain and the Republic of Ireland. In 2012, they carried 82% of passengers between the two countries (Ryanair 50% and Aer Lingus 32%). Aer Lingus franchisee Aer Arann, which operates mainly between the UK regions and Dublin, Cork and Shannon, had a further 10% of the market.

This test revolves entirely around the definition of the market. The UK/Ireland market accounts for less than 5% of all seats from the UK, a market in which Ryanair and Aer Lingus have shares of 17% and 2% respectively.

Total number of routes, outbound passengers and outbound flights for airlines operating services between Great Britain and the Republic of Ireland: 2012 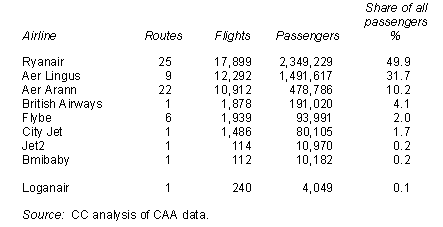 On certain city pairs, referred to by the CC as ‘corridors’, the combined share of Ryanair, Aer Lingus and Aer Arann is even higher. On London to Cork, Shannon and Knock, for example, they control 100% between them. On London to Dublin, the biggest corridor, their combined share in 2012 was 83%. 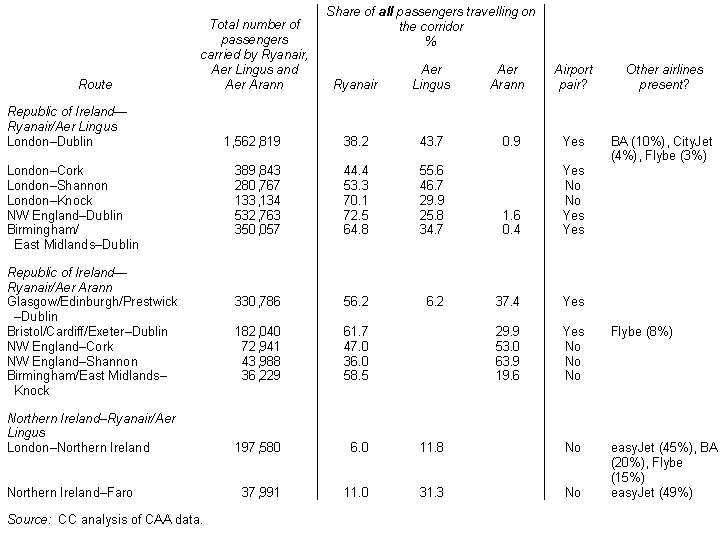 Ryanair will appeal the CC decision

Ryanair proposed a number of remedies to address the CC’s concerns, but the CC did not think it possible to cater for all eventualities and ordered Ryanair to reduce its holding to 5% and to refrain from buying further shares. Ryanair has said that it will appeal the decision. It is also in the process of appealing against the European Commission’s Feb-2013 prohibition of its bid to acquire Aer Lingus. Pending the outcome of that appeal, the CC cannot enforce the divestiture of Ryanair’s minority stake.

The EUR250 million value of the Aer Lingus stake is a drop in the ocean compared with Ryanair’s cash pile of EUR3.6 billion. As indicated by Ryanair’s 4-Sep-2014 warning that weak yields could threaten its FY2014 profit target, its management has more important concerns. Its single-mindedness have made it Europe’s most consistently profitable airline, but have also prevented it from abandoning its distracting pursuit of Aer Lingus and its habit of appealing every decision.

Meanwhile, Ryanair is continuing its sniping against Aer Lingus, recently accusing it of misleading Irish consumers by quoting seat sale fares which exclude a “non-optional” admin fee. This sounds like the kind of charge levelled at Ryanair many times in the past. Maybe Ryanair has exerted some influence.

Whether it’s a drama or a farce, this was probably not the last act.