Ryanair’s 1QFY2014 net profit falls, but 2Q will be key to the full year

As flagged by Ryanair in May, its 1QFY2014 net profit fell as a result of higher fuel costs and lower average fares (-4%), the first year-on-year fall in average fares in 14 quarters. With 90% of its FY2014 fuel bill hedged at USD980 per tonne, the key unknown variable for the full year is the development of average fares.

Ryanair says yields on close-in summer bookings have been weak recently, but it expects them to increase in 2Q. Moreover, ancillary revenue growth was strong (+25%) and this should also continue into 2Q. As is usual at this stage of the fiscal year, it made no change to its FY2014 net profit target, which is lower than market consensus forecasts.

Ryanair’s net profit guidance for FY2014 remains unchanged at between EUR570 million and EUR600 million, but this looks cautious compared with a consensus forecast among analysts of EUR646 million (source: Bloomberg, 29-Jul-2013).

Ancillary revenues were up 25%

Revenue growth of 5%, faster than passenger growth in the quarter, was due to ancillaries. Scheduled ticket revenues fell by 1%, with average fares down 1%, partly as a result of the change in the timing of Easter from April last year into March this year, thereby removing its beneficial impact out of 1Q. Average fares were also affected by the weakening of the GBP against the EUR and by the Jun-2013 French ATC strike.

Ryanair expects average fares to rise in 2QFY2014, by around 5%, although it says that yields on close-in summer bookings have been weak in recent weeks (likely due to the recent hot weather in North Europe).

Ancillary revenues grew by 25% to account for 27% of total revenues, their highest ever proportion. The strong growth in ancillaries reflected an improved product mix, the introduction of reserved seating across the network, higher admin/credit card fees and internet-related revenues. According to CEO Michael O’Leary on the conference call to discuss the 1Q results, there is little cost attached to reserved seating and the margins derived from ancillary revenues are also increasing.

Reserved seating, which cover eight rows of the aircraft, is helping to attract business-type passengers, particularly on routes where Ryanair has three or more daily frequencies. That said, Ryanair will not use travel agents or GDS to increase its appeal to business passengers.

Growth in operating costs of 8% was faster than revenue growth. Fuel costs accounted for almost half (47%) of the total and increased by 6% year-on-year. This was faster than the growth in passenger numbers due to increased average sector lengths and an increase in EUR-denominated fuel prices.

Airport, handling and route charges also grew faster than passenger numbers as a result of higher tariffs, particularly higher airport charges in Spain and ATC charges in Italy. Ryanair also says that these costs were affected by the mix of new routes and bases launched. This suggests that it may be having difficulty in finding such good airport deals as it has in the past, although it may just refer to longer sector length routes. Mr O’Leary sounded relaxed about this on the conference call, saying that Ryanair has a “myriad” of airport deals on offer as it is “the only show in town” for airports seeking growth.

Very competitive pricing, but not the only ultra-LCC in Europe

Key to its success, Ryanair has very low average fares by comparison with other European airlines. According to its 1QFY2014 presentation, its average fare of EUR42 compares with other LCCs such as easyJet on EUR80 and Norwegian on EUR83.

Ryanair also compares its average fares with those of FSCs with long-haul networks (see chart reproduced below).

Average fares for Ryanair and other European airlines 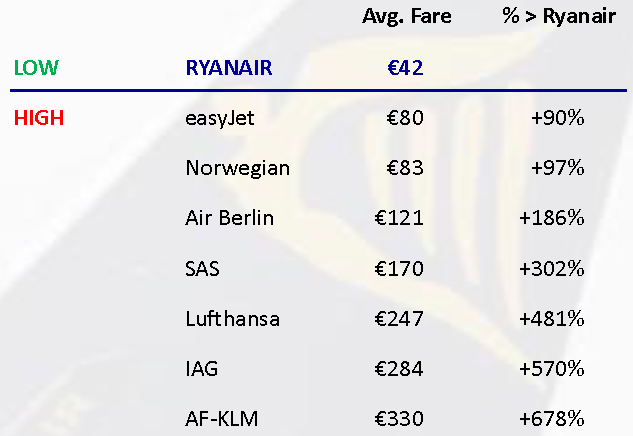 Ryanair’s comparison does not take account of ancillary revenues or average sector length. In addition, it is limited to a relatively small selection of carriers and to the most recent quarter. The chart below takes a wider view, comparing total revenue per passenger and average sector length for a larger selection of European airlines, based on annual figures for 2012.

This shows that Ryanair has the second lowest level of revenue per passenger among European airlines, with EUR62, 8% above that of Turkish LCC Pegasus on EUR57. With an average sector length almost 30% longer, this confirms Ryanair’s price competitiveness.

Nevertheless, our chart suggests that Ryanair may not be justified in claiming to be Europe’s “only ultra-low cost carrier”.

A chart of cost per passenger versus average sector length reveals a similar positioning and suggests that Pegasus and Wizz Air also have a valid claim to be included in such a group. However, it still has the best margins in Europe. 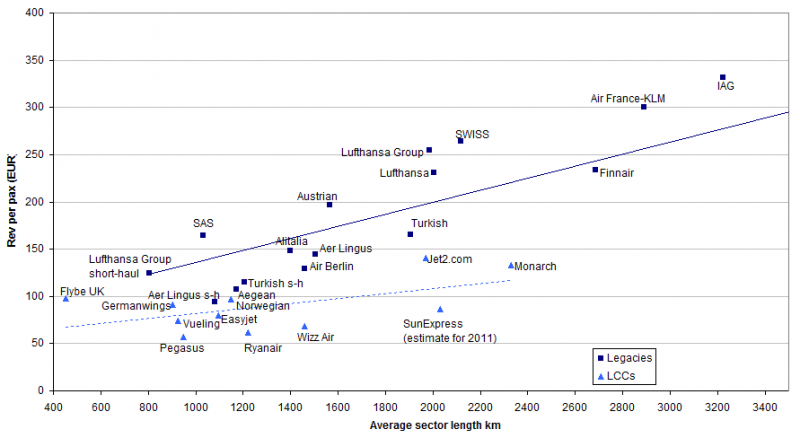 Ryanair increased its planned fleet numbers in late Jun-2013 as a result of increased demand and lower costs from both existing and new airport partners across Europe. As a result, its FY2019 passenger numbers target was increased from 100 million to 110 million. Over the current financial year (to Mar-2014), Ryanair’s fleet will fall by 15 aircraft due mainly to lease returns.

Nevertheless, it still expects 3% passenger growth in FY2014 as, in recent years, its fleet has included spare capacity in the winter months, when aircraft have been grounded. 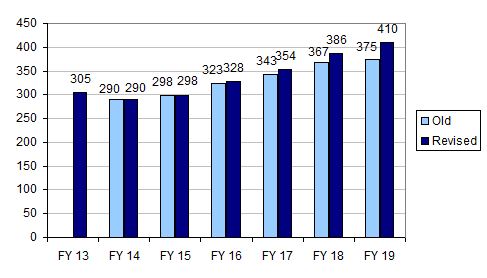 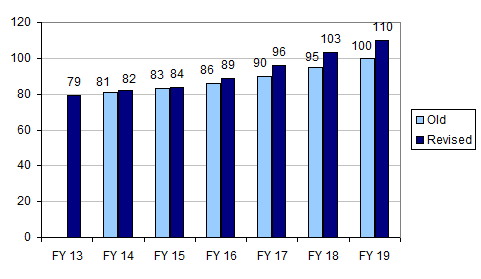 Ryanair continues to discuss a possible 737MAX order with Boeing, with a view to reaching agreement around the end of calendar 2013, subject to favourable terms including prices and delivery dates.

As CAPA has commented previously (6-Feb-2013), one of Ryanair’s weaknesses is that its earnings are highly seasonal.

This is also the case for the airline industry in general: indeed, Ryanair’s winter losses are typically less significant than those of its competitors. Nevertheless, Ryanair’s pattern of seasonality has become more pronounced since FY2009, although that year’s results were distorted by Ryanair’s failure to hedge its fuel bill just as oil prices hit their all-time high.

Ryanair’s cost structure is such that it is almost entirely a variable cost business, with fixed costs kept to a minimum. This has facilitated it in reaching decisions to ground some of its fleet in recent winters and this has at least had the effect of containing the losses suffered in the fiscal fourth quarter (Jan-Mar).

Over the past four full financial years, the first two quarters have been the key profit-making quarters. The first quarter (Apr-Jun) has accounted for a declining share of the year’s operating profit, while the second quarter has gained in importance. In FY2013, 1Q was 18% of the annual operating profit and 2Q was 81%.

The fall in profit in 1QFY2014 versus 1QFY2013 suggests that this seasonality pattern may become even more dependent on the second quarter. The next quarter will be decisive in whether or not Ryanair increases its guidance for full year profits, or whether market consensus forecasts will need to be reduced toward Ryanair’s guidance. Ryanair’s track record suggests that the former is the more likely outcome.