In early Jul-2013, Aer Lingus CEO Christoph Mueller declared that the carrier was “back to growth mode” (Financial Times, 4-Jul-2013), driven by Atlantic expansion. After 13% capacity growth on the Atlantic in 2013, Aer Lingus is planning a remarkable 24% growth in 2014. An important element of this growth involves attracting transfer traffic originating in the UK regions away from London Heathrow, building on Dublin’s geographic position and growing North American connectivity.

There are to be new routes from Dublin to San Francisco and Toronto and increased frequencies from Shannon to New York and Boston. A significant part of the new capacity will be operated under wet-lease by ASL Aviation Group. An important proportion of Aer Lingus’ regional feed from the UK into Dublin is also operated by a third party (Aer Arann) and Aer Lingus itself operates short-haul flights for Virgin Atlantic.

With these moves Aer Lingus appears to be testing and developing the concept of a virtual airline.

London Heathrow has 30 North American destinations, including nine of the 11 served by Dublin, so it is likely to remain the first choice hub for the majority of UK travellers to North America. Nevertheless, for large parts of the UK, Dublin is a viable alternative to Heathrow.

Dublin Airport has more weekly seat capacity to North America than any UK airport apart from Heathrow (source: Innovata, week of 8-Jul-2013) and it offers 11 destinations in North America, the same as London Gatwick and one fewer than Manchester.

In 2012, Dublin Airport saw growth of 5% in the number of trans-Atlantic passengers, to more than 1.6 million. In the first five months of 2013, more than 600,000 passengers travelled between Dublin and North America, an 11% increase on last year. This is faster growth than the 4% experienced by the airport as a whole in the first five months of 2013. Although detailed numbers were not yet published, the airport said on 3-Jul-2013 that passenger numbers on trans-Atlantic services were up more than 10% for the first six months.

North America represents Dublin Airport’s most important region by seat capacity after Western Europe, with just under 10% of international seats from the airport (source: Innovata, week of 8-Jul-2013). By country, the United Kingdom and the United States are the first and third most important international destinations by seat capacity to Dublin Airport. Between them, they account for 44% of Dublin’s seats, suggesting strong potential to develop connecting flows. 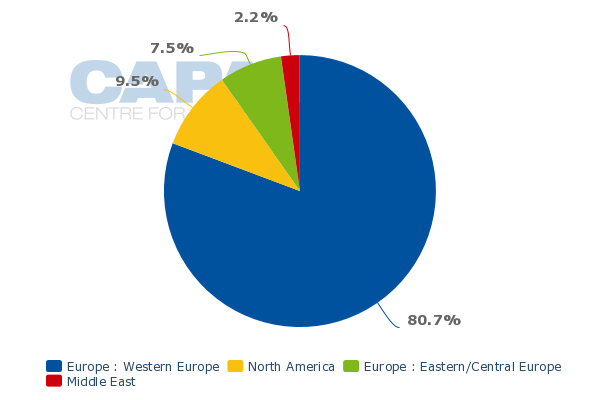 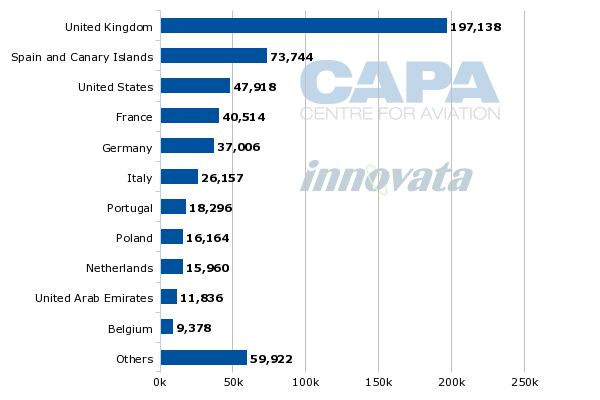 See related report: The North Atlantic: the state of the market five years on from EU-US Open Skies

North America accounts for less than 10% of Aer Lingus seats

North America currently represents less than 10% of Aer Lingus’ international seat capacity and around 9% of its total seat capacity (source: Innovata, week of 8-Jul-2013), but it is an area of growth. 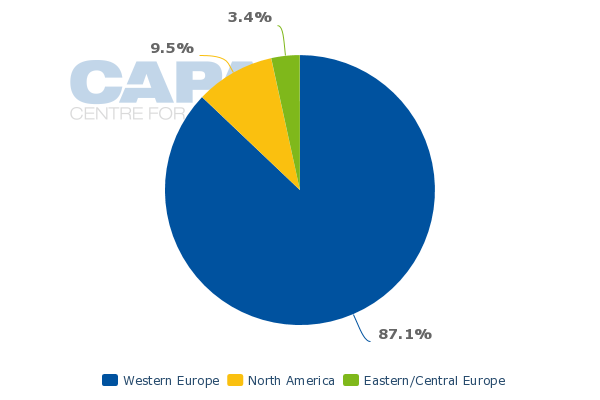 In 2012, the Irish airline carried 100,000 UK passengers to the US via Dublin, or 200,000 on a two-way basis. This compares with a total of 981,000 passengers reported on the airline’s long-haul network, which is exclusively to the US, meaning that just over 20% of passengers on its US network began their journey in the UK in 2012. Given a break-even passenger load factor of approaching 74% for the airline overall (source: CAPA analysis), these passengers make a significant contribution to Aer Lingus' profitability.

This strategy of targeting UK passengers builds on Dublin’s geographical position, which places it to the west of all the major UK cities. The UK’s main hub, London Heathrow, is located to the east of most of these cities. Aer Lingus flies from Dublin to New York JFK, Boston, Chicago and Orlando. 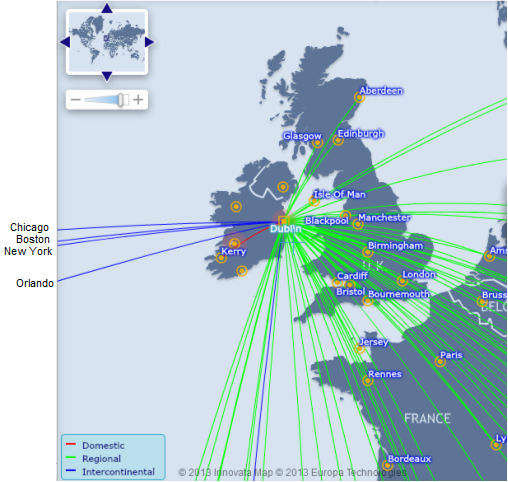 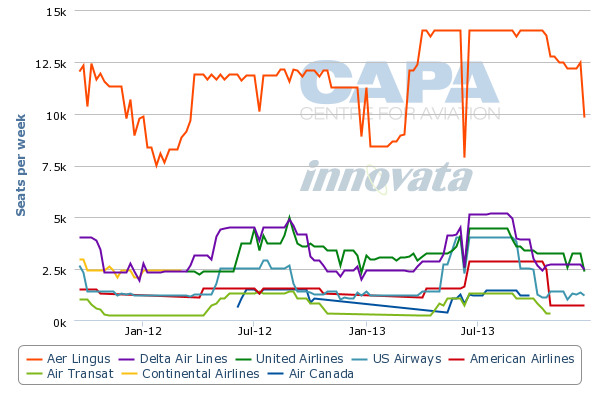 Aer Lingus also plans to continue strong capacity growth in the Atlantic next year, with a 24% increase in its trans-Atlantic capacity in 2014 through two new routes from Dublin and increased frequencies from Shannon to Boston and New York. It will base two Boeing 757 aircraft, wet-leased from ASL Aviation Group’s Irish airline Air Contractors, at Shannon. It plans to launch a daily 757 service to Toronto, also to be operated by Air Contractors, and to add San Francisco to the network in Apr-2014.

The San Francisco route, using A330 equipment and operated by Aer Lingus five times weekly, builds on the links between Silicon Valley and the Irish capital, where a number of technology companies have their European headquarters. Toronto is home to a large Irish community and this route builds on Aer Lingus’ strategy of connecting Ireland to the global Irish diaspora.

Using partner carriers in North America, Aer Lingus will offer customers travelling from a number of UK and European cities via Dublin onward connections to sixteen cities on the US west coast and beyond including Seattle, Los Angeles, Las Vegas and San Diego. Passengers travelling from UK and Europe via Dublin to Toronto will have the option to connect to eight key cities within Canada including Vancouver, Montreal and Calgary.

Aer Lingus has some strong market positions on its North American network and this serves to increase the likelihood that UK passengers will choose its service on these routes when connecting over Dublin. It is the number one carrier on all four of its existing North American routes from Dublin and the monopoly carrier on two of these (Boston and Orlando).

If existing competitors make no changes to their schedules, Aer Lingus will be a monopoly carrier on its planned new San Francisco route and have a similar weekly seat capacity to Air Canada on its new Toronto route. It also has a monopoly position on Shannon to Boston, but is currently only the third biggest carrier on Shannon to New York.

After the launch of the Toronto route in Apr-2014, there will still be five North American destinations that are served from Dublin by other carriers with no Aer Lingus presence: Atlanta, Charlotte Douglas, Montreal, Philadelphia and Washington Dulles. In addition, there are many routes not served from Dublin by any carrier, pointing to the potential for further growth.

Aer Lingus’ trans-Atlantic growth strategy, partly based on taking market share of connecting passengers away from carriers based at Heathrow, looks credible given Dublin’s geographic position and its improving North American connectivity. Nevertheless, to put it in context, Aer Lingus’ approximately 14,000 weekly one-way seat capacity to North America this summer compares with British Airways’ total of more than 90,000 seats from the UK to North America.

Ironically perhaps, this lack of scale for Aer Lingus may assist its growth, as a low percentage loss of transfer traffic for one of the big competitors translates into a significant percentage gain for Aer Lingus. It will have to manage potential conflicts with Virgin Atlantic, for whom it operates short-haul connecting flights from Manchester, Edinburgh and Aberdeen to its London hub.

Moreover, Aer Lingus will need to ensure operational consistency with its wet-lease partner on its long-haul routes. Nevertheless, this strategy certainly offers growth potential if these challenges can successfully be met. 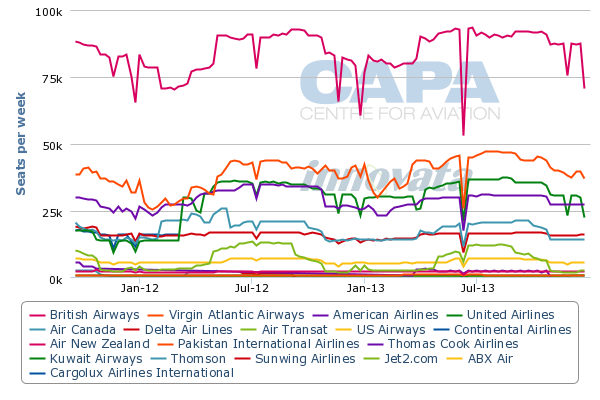