By virtue of shrinking less, Russia is now Europe's biggest market by airline seats in the week of 20-Apr-2020, based on data from OAG and CAPA. Its 75% year-on-year capacity cut compares with a 90% decline for all Europe as a result of the COVID-19 crisis.

According to the CAPA Fleet Database, Russia also has a higher share of aircraft in service than in the rest of Europe.

The pre-crisis European leader, the UK, has suffered a 94% decline in seats and slipped to third place this week, behind Russia and Italy (that latter has taken a first upward step in seat numbers).

The growing consensus is that domestic markets will lead the post-crisis recovery. If this prediction is borne out, Russia's move up the European aviation ranking could endure.

According to the CAPA Fleet Database, airlines registered in the Russian Federation have 746 aircraft in service as at 20-Apr-2020. Unlike almost anywhere else in Europe, this represents the majority of aircraft – 58% to be precise.

In the UK, the largest aviation market in Europe before the crisis, just 22% of aircraft are currently in service.

Percentage of aircraft in service for selected regions and countries: 20-Apr-2020 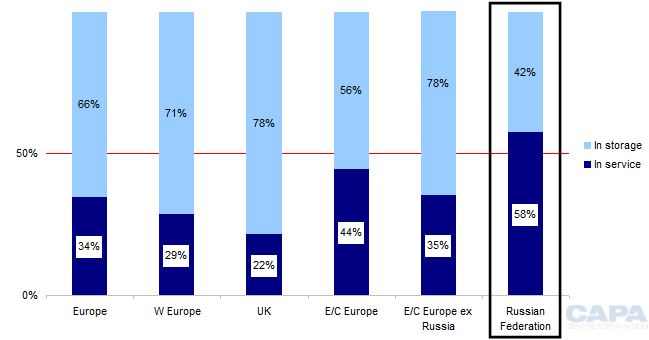 Russia's seat capacity has dropped by 75%, vs 90% for all Europe

Russia's seat capacity has been reduced by 74.7% in the week of 20-Apr-2020, according to data derived from airline schedules filed with OAG and seat configurations from the CAPA Fleet Database.

This is a massive fall, but compares favourably with a 90.4% decline for Europe as a whole.

Russia's domestic market capacity has dropped by 57%, vs 83% for all Europe

Russia's domestic market is a bigger share of total seats

Not only has Russia's domestic market been reduced by a lesser percentage than elsewhere in Europe, but it is also a more important part of its total market.

As it has fallen by less than the international market, Russia's domestic market now (week of 20-Apr-2020) accounts for 85.4% of the country's seats. Domestic seats are now 41.8% of the total for Europe as a whole.

As a result of shrinking at a lesser rate than the rest of Europe, Russia is now the continent's biggest market by airline seats in the week of 20-Apr-2020.

The pre-crisis leader, the UK, has suffered a 94.4% year-on-year decline and slipped to third place this week. Italy is second this week, after taking a first tentative upward step in seat numbers following its deep cuts. 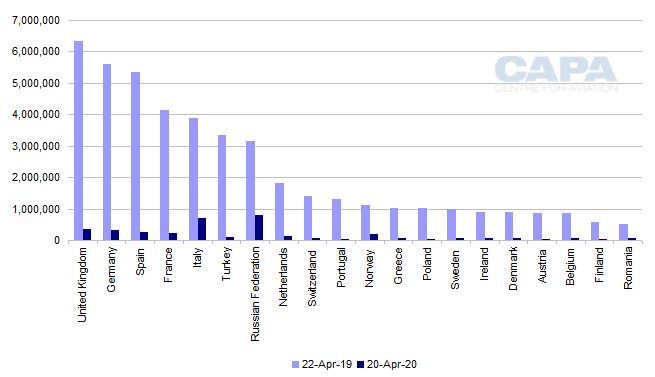 Aeroflot was Russia's biggest airline by seats a year ago

Russia's list of top 10 indigenous airlines by seats from a year ago in 2019 fairly well represents what normal used to look like. In the week of 22-Apr-2019, Aeroflot led the list with 1.1 million seats, almost three times the capacity of the number two, S7 Airlines (just under 400,000 seats).

Aeroflot's LCC subsidiary Pobeda was number three, with 204,000 seats, ahead of four airlines with between 110,000 and 190,000 seats: Ural Airlines, UTair Aviation, Nordwind Airlines and Azur Air.

Russian Federation: weekly seat capacity for top 10 airlines in the week of 22-Apr-2019 and percentage change to 20-Apr-2020

A year on, seven of last year's top 10 are still in the top 10 but the order is different.

However, Pobeda announced that it would suspend all operations during Apr-2020 and so, this figure does not seem to reflect reality, as can be the case with airline schedules filed with OAG.

S7 Airlines is still second, but with capacity reduced by 66%, and Aeroflot has slipped to third place after an 89% capacity cut. Ural Airlines and UTair retain fourth and fifth respectively, but seat numbers for both have been reduced by 75% to 80%.

Russian Federation: weekly seat capacity for top 10 airlines in the week of 20-Apr-2020 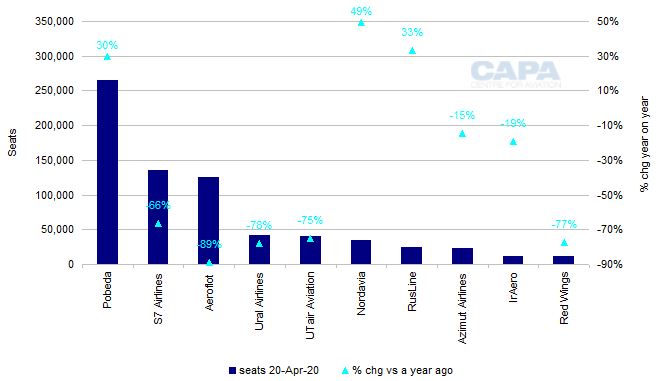 Russian capacity may be bottoming out

The 74.7% year-on-year reduction in total Russian seat numbers this week is the deepest cut so far in the country's weekly capacity during the current crisis.

Capacity data for future weeks, derived from OAG schedules filings and CAPA seat configurations, point to a narrowing of the reduction in seats to 55.1% next week (commencing 27-Apr-2020).

So far during the crisis future schedules have been revised downwards with each successive week and so, this outlook is subject to change.

Russian capacity cuts may be bottoming out (as seems to be the case across Europe), but the steep recovery curve currently indicated looks optimistic.

Nevertheless, Russia's large domestic market should allow it to experience a faster recovery than for the rest of Europe.

*Note: dotted line indicates future capacity based on airline schedules filed as of the week commencing 20-Apr-2020 and is subject to change.
Source: CAPA - Centre for Aviation, OAG.

The Russian government is providing some support to aviation

Meanwhile, on 21-Apr-2020, Russia's Government announced a plan aimed at mitigating the economic impact of the coronavirus outbreak.

The government is also considering additional support measures, including the provision of RUB7.6 billion (EUR91.0 million) to carriers as compensation for lost revenue in Mar-2020 and RUB1.7 billion (EUR20.4 million) for revenue lost in Feb-2020.

Airports could receive RUB2.1 billion (EUR25.1 million) as compensation for revenue forgone as a result of restrictions on international travel.

Aeroflot Group will be a survivor of the crisis

On 17-Apr-2020 the credit rating agency Fitch Ratings downgraded Aeroflot's long term rating from BB to BB-, maintaining a negative outlook, as a result of the COVID-19 crisis and lower demand levels.

Nevertheless, Aeroflot and other Russian airline groups have an advantage relative to European peers in having a much higher share of revenue in the domestic market.

A CAPA analysis report of 8-Apr-2020 presented a chart showing the proportion of 2019 ASKs in domestic markets for Europe's top 20 airline groups (ASK share is a better proxy for revenue share than is seat share).

Heading the list were S7 Group, with 60.5% of ASKs, and Aeroflot Group, with 39.6% in the domestic market, based on data from OAG.

None of the leading five Western European airline groups – Ryanair, Lufthansa, IAG, Air France-KLM and easyJet – had more than 11% of 2019 ASKs in domestic markets.

Aeroflot Group was profitable in 2019, but its liquidity at year end (including undrawn lines of credit) was equivalent to a little more than two months of revenues, which was not much more than global airline averages.

In the continuing crisis, 226 of the group's 368 aircraft are inactive, a 61% share in contrast with Russia as a whole. Ownership of the regional airlines Rossiya and Aurora and of Russia's only LCC Pobeda give the group flexibility when applying capacity to markets where there is still demand – particularly domestically.

Aeroflot Group is stock market listed, but still 51% owned by the Russian state. It seems likely that the state would provide further support to the group if necessary.

Russia's move up the European aviation ranking could endure

Russia's move to the top of the list of European countries by weekly airline seats has been the result of exceptional circumstances that have distorted aviation markets.

However, those distortions are unlikely to snap back into their former shape any time soon, particularly for those countries and airlines where international markets dominate (as in much of Europe).

The relative strength of Russia's domestic market could prove to be an enduring advantage for the nation and its leading airlines.