The passenger throughput in the United Arab Emirates is associated with transfer traffic, and understandably since well over half of passengers connect. But often ignored is the growing point-to-point traffic, especially in Dubai, which is a hub for business, tourism and shopping.

Qatar Airways has made the UAE its largest source market. Qatar has more seats to the UAE than any other country, including India although this is skewed by Indian bilateral restrictions. In comparison, local carriers Emirates and Etihad do not feature Qatar amongst their 10 largest markets.

This is the second in a series of analysis reports on Ras Al Khaimah. The first report focused on opportunities for further LCC growth including from Air Arabia, which opened a small base at Ras Al Khaimah in May-2014.

A mention of the UAE undoubtedly draws to the mind the mega hub of Dubai and then the growing position of Abu Dhabi. But the country has a growing number of burgeoning hubs, even if they are much smaller than Abu Dhabi, let alone Dubai International.

Dubai's new airport Al Maktoum at Dubai World will one day overtake Dubai International but for now sees a sprinkling of services to be complemented in late Oct-2015 with a new base from LCC flydubai.

Sharjah is less than half of the distance to Dubai International as "Dubai" Al Maktoum is, but the facility is in a different emirate and thus cannot carry the Dubai name. Sharjah is the main and original base for Air Arabia.

The four airports – stretching from Abu Dhabi, passing Al Maktoum and then Dubai International and finally Sharjah – are within approximately 80 miles of each other. Qatar Airways has service to all four, and in May-2015 announced its fifth point in the UAE, Ras Al Khaimah (RAK, although the airport code is RKT). The daily service was due to commence 01-Oct-2015 but has been delayed to Feb-2016 due to scheduling requirements and aircraft availability.

On both frequency and seat capacity, RAK will be Qatar’s fifth and smallest point in the UAE after Dubai International, Abu Dhabi, Al Maktoum World Central and Sharjah. This is based on Oct-2015 data assuming Qatar had launched as first planned. Qatar's Feb-2016 UAE capacity is largely unchanged. 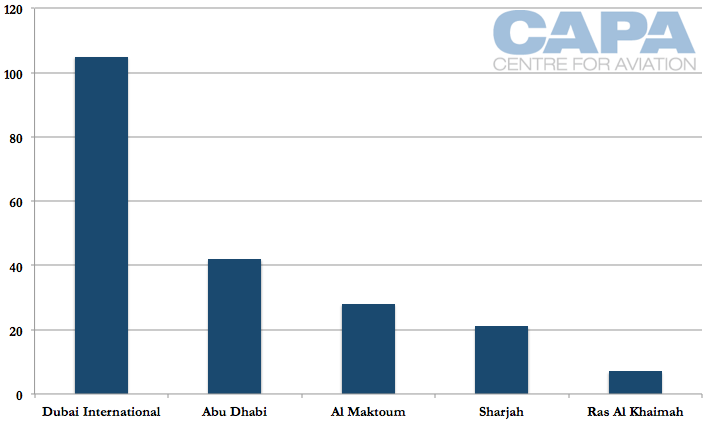 Note: Ras Al Khaimah capacity based on original plan for one daily flight from 1-Oct-2015
Source: CAPA - Centre for Aviation and OAG

Excluding the RAK service now due to start in Feb-2016, Dubai International is the largest market in the UAE for Qatar, accounting for 54% of its UAE frequencies and 58% of seat capacity, according to OAG data. Qatar's use of widebody aircraft on Dubai International services reflects the airport having a higher portion of seats than frequency.

Abu Dhabi is Qatar's second largest UAE market with 21% of both frequency and seat capacity. Sharjah has half the frequencies of Abu Dhabi and 43% as many seats (reflecting the use of smaller narrowbody aircraft). 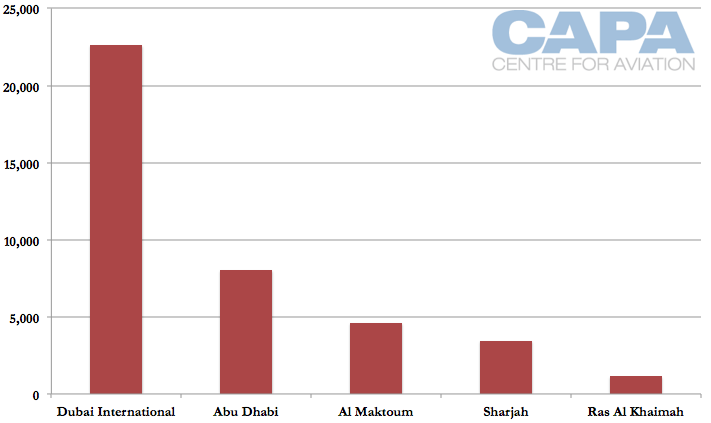 Note: Ras Al Khaimah capacity based on original plan for one daily flight from 1-Oct-2015
Source: CAPA - Centre for Aviation and OAG

UAE – not India – is the largest source market for Qatar Airways

The UAE is Qatar Airways' largest source market, and Qatar has 67% more seats to the UAE than India. 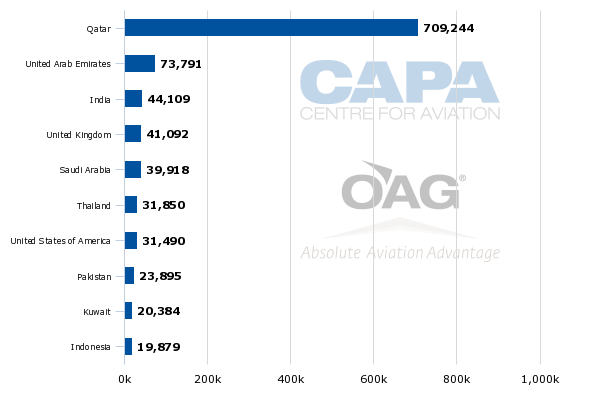 For Emirates and Etihad, India is the largest source market (Qatar does not feature amongst the top 10). 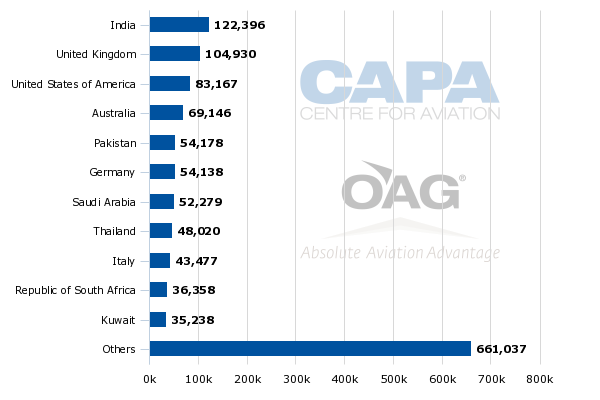 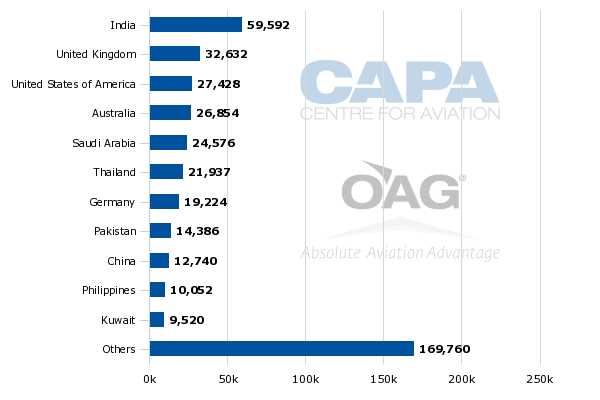 Dubai and the wider UAE are naturally an attractive source market market for Qatar. Dubai is less than an hour flight from Doha and Dubai is a hub for the region in terms of financial, shopping, tourism etc. While this draws connecting passengers who transit in Qatar's Doha hub, there is also local Doha-Dubai traffic.

Qatar offers ticketing flexibility, dedicated check-in counters at Doha and fast track services for its so-called "Dubai Shuttle" services. Qatar introduced its shuttle product for the Dubai and Dubai World Central markets at the beginning of May-2015.

Qatar's Doha hub attracts less point-to-point traffic than at Emirates in Dubai. Emirates and Etihad Airways each serve only their local hubs of Dubai and Abu Dhabi respectively, although Etihad runs shuttle busses to Dubai while both offer UAE-wide car transfers for premium passengers.

Emirates will up-gauge Dubai-Doha services, which in early 2016 will see its seven all-widebody flights having just under the seat capacity of Qatar's 15 flights on a mix of widebody and narrowbody aircraft. For now, Qatar has about a 44% share of seats in the Doha-Dubai International market, followed by Emirates with 30% and flydubai with 26% 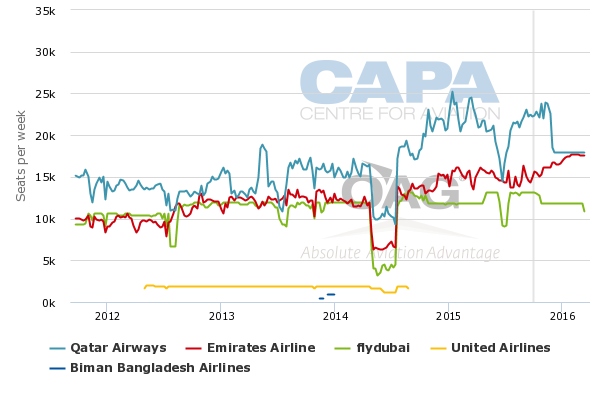 In the wider Doha-UAE market, Qatar has about a 50% share of seat capacity share followed by Emirates with 20%, flydubai with 18%, and then Air Arabia and Etihad each with 6%. 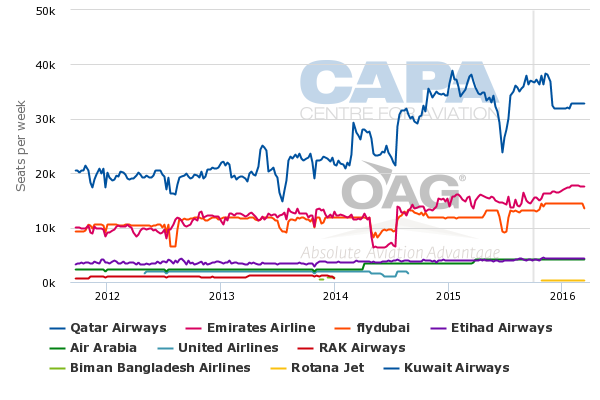 RAK airport would like Qatar’s service to link the emirate with Qatar’s global network. However, RAK understands Qatar will focus on linking RAK to Europe, where there may be some better understanding and awareness of RAK compared to Asian points.

There have been charters from Europe to RAK, giving some awareness to the smaller emirate. RAK airport says geography is also at play: Qatar sees Southeast Asia being too circuitous from RAK as RAK-Asia connections over Doha will require limited backtracking; Europe is more on the way.

Qatar's RAK flight was originally scheduled to depart Doha and arrive in RAK in the early evening. This would ensure connectivity with Doha's European network, which typically arrives in Doha in the late afternoon and early evening. The return flight would depart RAK and arrive in Doha in the late evening. This would provide some connectivity to Europe for Qatar's European services that depart Doha after midnight. However, some European destinations do not have service departing Doha until the morning, requiring an overnight stay.

RAK is certainly a thinner market for Qatar. Already Qatar's Dubai International and Dubai Al Maktoum flights can see low load factors, although there are no publicly available statistics on this.

RAK is looking to follow in the footsteps of its peers in the UAE and use aviation to grow the local economy. RAK is significantly less built-up than Dubai and offers tourists a less urban beach holiday, but RAK is pragmatic in that its greatest opportunity will be using its location as a low-cost alternative to Dubai and Sharjah.

The low-cost, secondary city airport is not the objective with Qatar's RAK service. Instead Qatar's RAK service supports RAK's smaller objective of bringing passengers into the emirates and staying there (rather than proceeding to Dubai) as well as providing residents with local flights rather than requiring them to drive to Dubai. The opportunity is surely small for Qatar and helped by generous incentives, although these are not disclosed.

Qatar's RAK service was scheduled to be daily, but the airport says there have been thoughts to potentially increase it the service to two or three daily in order to better utilise A320s. (This could explain Qatar delaying the service in part due to aircraft availability.)

Saudi intended to grant operating licenses to two new carriers, even those with majority or complete foreign ownership, in order to stimulate local growth. Qatar was selected, as well as a group that intends to launch Saudi Gulf. However, the certification process for both has been repeatedly delayed and both the airlines and regulator have remained opaque on the issue.

After storing the Al Maha aircraft, Qatar finally took delivery of them and placed them into service on its network. The aircraft have an Al Maha livery and interior but operate with Qatar crew.

Qatar has understandably made the UAE a strong focus for it. Within a short distance of Doha, the UAE offers some of the largest (and growing) O&D demand in the region.

Dubai is the most important link by far, with Qatar's other UAE points giving it wide spread. However, given the compact area of the region and Qatar's high frequency, there is risk of over-saturation.

The Ras Al Khaimah service is more important to the airport than to Qatar Airways. But the Qatar service will be more of an exception than the rule, or representative of future growth. The airport's focus is shifting towards LCCs and regional passengers. Volume in this segment is far more promising than intercontinental passengers.