Air Arabia and flydubai have hubs that are no more than 150 km apart and their networks overlap on better than 40 destinations, but the two fierce competitors have remarkably both been able to operate profitably. In 2013, combined, they handled traffic of almost 13 million passengers and earned an impressive combined profit of AED657.8 million (USD179 million).

Even rubbing shoulders as they do, the carriers' outlooks for profitability and growth in 2014 are positive. Both are maintaining the aggressive fleet and network expansion plans that have characterised their behaviour over the past few years.

flydubai is due to receive eight aircraft in 2014; Air Arabia is scheduled to take delivery of 10. As new aircraft are accepted into their fleets, the two will continue to build new connections within the Gulf and wider Middle East region. In addition, both are exploring new markets bordering the Middle East, particularly markets underserved by other Middle East-based airlines.

In Feb-2014, Air Arabia chairman Sheikh Abdullah Bin Mohammad Al Thani said the carrier was “extremely confident about the long-term fundamentals of the aviation sector in the region and believe we have the right business model, operating base and infrastructure in place to cement our position as the region’s leading low-cost carrier operator.”

flydubai CEO Ghaith Al Ghaith, commented in Apr-2014 that there is “much untapped opportunity for us”. The carrier’s recent fleet order for 75 Boeing 737 MAX 8s, as well as another 11 737-800s shows its “appetite for further expansion and the continued demand for our flights” according to Mr Al Ghaith.

Air Arabia is losing the growth race, but widening its operating base

When it started operations in 2003, Air Arabia brought the LCC revolution into the Middle East. Since its launch, it has enjoyed a position as the region’s largest low-cost carrier. However, the carrier has not been able to match the growth of the emirate of Dubai-backed flydubai,

Even before flydubai launched its first flights in mid 2009, it was apparent that the carrier’s intention was to become a major player, not just in the Middle East’s LCC sector but in the region’s aviation market as a whole. In 2008, the airline ordered 52 737NGs and announced it would operate to routes within a five-hour radius of its hub, a catchment area of around 3 billion people.

Despite flydubai’s move into the top spot, Air Arabia still has an advantage in its diversified and larger network. With three hubs operational and a fourth due to start imminently, the carrier operates across 91 routes in better than 30 countries (compared to 66 routes operated by flydubai).

66 of Air Arabia’s routes are operated from its main base at Sharjah, with capacity predominantly operated into destinations in the Middle East and South Asia. Air Arabia also has a significant number of routes into Western Europe from its Moroccan hub, as well as across North Africa from its hub at Alexandria.

Air Arabia will initially base two A320s at the airport. The carrier has announced it will launch operations from Ras Al Khaimah on 06-May-2014, with routes to Cairo, Islamabad, Jeddah, Lahore, Muscat and Peshawar. The carrier also plans to add service to Dhaka (Bangladesh) and Khozikode shortly after, although a timeframe has not been disclosed.

Ras Al Khaimah International Airport is showing rapid growth in its tourism and business travel sectors, albeit from a small base compared to Sharjah, Abu Dhabi or Dubai.

The emirate has grand plans for its development as a passenger and cargo hub. However, its ambitions had been frustrated by the less than stellar performance of RAK Airways, which failed in 2009 and then was restarted in 2010, with significant but ultimately unfulfilled expansion planes. Ras Al Khaimah Department of Civil Aviation chairman Sheikh Salem Bin Sultan Al Qasimi said the new agreement is “a natural step in the next stage of Ras Al Khaimah’s aviation development.”

Ras Al Khaimah is roughly 90 km from Air Arabia’s main hub at Sharjah International Airport. While the new hub operation could be seen as offering a potential threat of cannibalisation and a duplication of effort, Air Arabia is confident it can make it work as a secondary hub for the UAE. The carrier will grandfather in its existing operational and management structures, thanks to the uniformity of aviation regulations across the UAE. It has been working with the Ras Al Khaimah Department of Civil Aviation to ensure that it can quickly grow the required economies of scale at the airport.

flydubai outpaces Air Arabia in Russia and the CIS

Outside the UAE, one of the key battlegrounds for Air Arabia and flydubai has been Russia and the CIS (comprising Armenia, Azerbaijan, Belarus, Kazakhstan, Kyrgyzstan, Moldova, Tajikistan and Uzbekistan, as well as Ukraine and Turkmenistan as participating members). Both carriers have been building capacity into the region. The rapidly emerging economies, with expanding business links and underdeveloped tourism links, are tempting targets for the low-cost carriers.

Air Arabia has five destinations in Russia, four in Ukraine and four across the rest of the CIS nations. The carrier launched service to Shymkent, its third destination in Kazakhstan, in Mar-2014. It has not announced any future route to be launched in the region for 2014, as the start-up of operations from Ras al Khaimah will absorb much of its new capacity from May-2014 onwards.

flydubai entered the Russian market in 2010 and has since added flights to 18 destinations in the Russia/CIS region. In 2013, flydubai doubled its network in Russia, adding four new destinations: Krasnodar, Mineralnye Vody, Rostov-on-Don and Volgograd. flydubai plans to add a ninth Russian destination in Sep-2014, with Dubai-Moscow service. It has not yet revealed which Moscow-area airport it plans to operate to.

The Middle East’s LCC sector is still underdeveloped by global standards – LCCs in the Middle East account for only about 16% of traffic within the region and 10% of capacity to/from the region – and there are opportunities to develop short-haul routes to underserved regional economies.

Thus Air Arabia and flydubai still have the potential to grow without treading too heavily into each other’s territory. 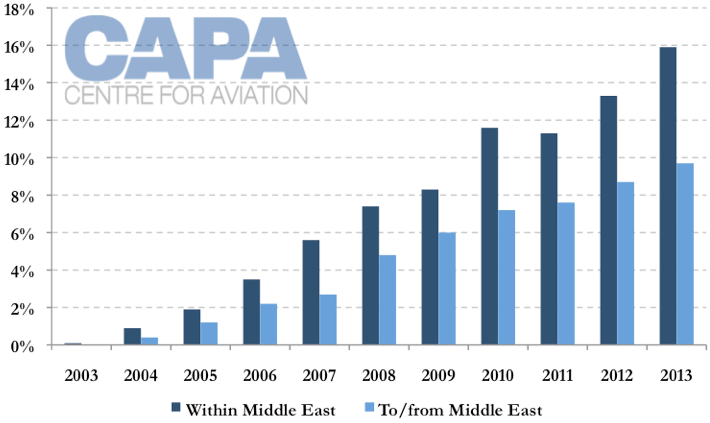 Air Arabia's distributed hub network in particular provides it with a multitude of expansion opportunities. Air Arabia is now looking at widening its network even further, opening up new regions. Ukraine, Russia, Kazakhstan and Armenia will remain a focus for the carrier’s Sharjah hub and more routes in the GCC and wider Middle East are planned for 2014.

China and JVs are on the radar for Air Arabia

In Oct-2013, CEO Adel Ali stated the carrier is hoping to launch its first flights to Chinese destinations in 2014. It has a number of cities it is interested in, including Chengdu and Kunming. At five to six hours flight time, the routes would be a stretch for the carrier’s A320s, but are technically possible. Western African routes are also on the agenda for 2014, as part of a diversification of routes for the carrier’s Casablanca operation.

Air Arabia will also continue to search for more local JV opportunities, and may even expand its brand beyond the Middle East and Africa. The launch of the carrier’s Levant hub has been indefinitely suspended for several years due to the instability surrounding Syria and Libya. However, there are plenty of other opportunities in the Middle East, Africa and even Central Asia. Turkey, with its booming economy and fast expanding LCC travel segment, has also been raised as a possibility. Saudi Arabia remains a possibility as well, although further liberalisation would be necessary in the market.

Both Air Arabia and flydubai expect the 2014 operational climate will remain much the same as last year. With new routes and aircraft being added, the carriers are optimistic there remains plenty of growth still to be tapped.