The policy will result in a “full implementation” of Executive Order No 219 issued by a previous government back in 1995 to boost tourism and investments. The order states the country should have at least two international carriers as flag carriers and the exchange of traffic rights and international routes should be based on national interest, "which shall include value for the Philippines in terms of promoting international trade, foreign investments and tourism, among others" including the principle of reciprocity or "the exchange of rights, freedoms, and opportunities of equal or equivalent value”. The Civil Aeronautics Board (CAB) will determine what is in the "national interest". Executive Secretary Paquito Ochoa noted the EO will prohibit cabotage.

The EO was to be implemented earlier in the month, but has been postponed, as President Aquino now plans to make minor changes to the directive, including alterations the composition of a panel that will negotiate the new policy.

The Philippine Government plans to implement the policy to boost further tourist numbers and stimulate investment in Philippine tourism industry. Mr Aquino stated the order has so far had a “dramatic” impact on domestic tourism, providing passengers with a “wider range of choices and travel opportunities”. According to the President, the Philippines’ “national development requires promoting an open and competitive international aviation sector that enables Philippine and foreign air carriers to expand their operations, maintain a strong Philippine-based aviation industry, and ensure international connectivity in order to allow Philippine and foreign air carriers to plan and make long-term investments in the Philippine market.” The government has also started work on a new campaign to “re-brand the country as a tourist destination”.

Tourist numbers to the country were growing in 2010. They rose 15.9% year-on-year for the first 10 months of 2010, to 2.8 million, according the Philippines’ Department of Tourism’s latest data. 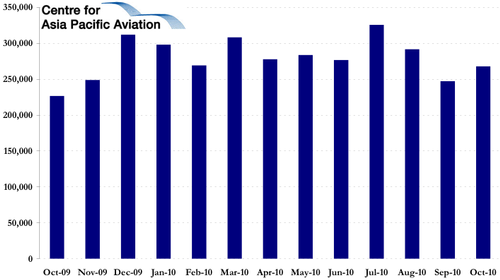 Mr Aquino is confident the policy will promote competition among carriers and lower fares to/from the country as a result. He noted the policy will be implemented in such a way to provide benefits for Philippine carriers, not just foreign carriers.

Philippines Tourism Secretary Alberto Lim stated airports are now being readied for the implementation of the new policy, which is to initially focus on liberalising operations to/from secondary airports. In the first phase, the pocket open skies policy will cover four secondary gateways; Cebu, Davao, Zamboanga and Laoag airports. Philippines' Bureau of Customs, Bureau of Immigration and the Bureau of Quarantine will deploy additional staff once additional flights start from these airports. Other secondary airports in the country include Bacolod-Silay City International Airport, General Santos International Airport and Subic Bay International Airport, but these are yet to be included under the policy.

Philippine Airlines welcomed the liberalisation plans, stating it will continue to work with the government to attract more foreign tourists to the country. PAL has the majority share of international capacity to/from the Philippines, with a 28% share. Cebu Pacific is the second largest carrier with a 16% stake. This may change though, as a number of airlines have already expressed interest in launching services to/from the country under the new policy, according to Mr Aquino. 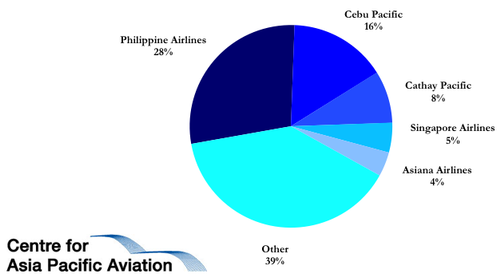 The move is part of a number of recent developments in the opening of ASEAN skies. In Nov-2010, ASEAN transport minister signed off on allowing designated airlines of member states to operate and carry traffic from any ASEAN city with an international airport to counterparts in other member states. The agreement allows full third, fourth and fifth-freedom traffic rights. ASEAN Economic Community Deputy Secretary General S Pushpanathan stated the agreement would “significantly enhance [ASEAN’s] air transport competitiveness, especially in facilitating air travel among ASEAN cities that ultimately support the tourism industry in the region”.

The ministers also approved the Brunei Action Plan for ASEAN strategic transport co-operation from 2011-15, which will guide cooperation and integration over the next five years in line with the formation of the ASEAN Economic Community in 2015.

A framework was also agreed upon for the region to enter similar air services arrangements with non-ASEAN parties, specifically dialogue partners, starting with China. Under this agreement, ASEAN designated airlines will be able to carry traffic from any city with an international airport in their territories to counterparts in China with third and fourth-freedom traffic rights. Mr Pushpanathan stated the agreement would help support the ASEAN-China Free Trade Area and also increase tourist traffic between ASEAN and China.

In addition to the ASEAN open skies developments, there have also been a number of other liberalisation developments within Asia as of late. This includes the recent open skies deregulation agreement between Tokyo Narita and Seoul Incheon airports. Japan is also scheduled to conclude open-skies agreements with Singapore in Jan-2011 and Malaysia in Feb-2011.

Cambodia also signed at the end of Dec-20101 a bilateral air services agreement with the UAE, allowing designated carriers one daily service with third and fourth freedom traffic rights between the countries and the right to exercise full fifth freedom traffic rights through three intermediate points (Bangkok, Kuala Lumpur and Singapore) and to three points beyond to be freely selected by the designated carriers. The UAE have designated Etihad Airways, Emirates, Air Arabia, RAK Airways and flydubai to operate the agreed services between the two countries.

Also at the end of 2010, Indonesia signed an MoU with Kuwait to update some clauses of their air transport regulation agreement and assign all Kuwaiti carriers to the agreement.

The further liberalisation of Asian skies is expected to boost this already steadily growing market into a major player in the aviation industry, with further bilateral and open skies agreements to surely continue to develop.