Christopher Luxon, who next year will take over as Air New Zealand CEO from Rob Fyfe, sees growth opportunities in the carrier's flagship long-haul division. A critical component of that growth will be alliances and partnerships, which in the past three years have taken on greater prominence in ANZ. Short-term growth prospects are in North America, with Air New Zealand evaluating service to destinations like Denver and Houston, hubs for Star Alliance partner United. Medium- and long-term growth opportunities are in Asia Pacific, where partnerships will be even more critical to help ANZ's disadvantaged position of a higher cost base and end-of-line positioning.

Mr Luxon's appointment, effective 01-Jan-2013, fulfils Mr Fyfe's objective to have an internal candidate succeed him, but with Mr Luxon having been with ANZ for a mere 13 months, he also brings critical outside experience. He has been the general manager of ANZ's international division and previously worked for Unilever in Asia, Australia and North America. At 42 years old, he continues the region's theme of young CEOs: Qantas' Alan Joyce is 46 and Mr Fyfe was appointed CEO when he was 44.

Mr Luxon to shadow Mr Fyfe for remainder of the year

The relatively early announcement of Mr Luxon's appointment – Mr Fyfe will remain as CEO through the end of the calendar year – indicates ANZ's course of strategy should see little upheaval. In comparison, John Borghetti took over as Virgin Blue CEO from Brett Godfrey on two months' notice and subsequently changed almost every aspect of the airline, big and small, from name (now Virgin Australia) to the food on board. Alan Joyce was appointed Qantas CEO four months before his start and made internal changes as well as an overhaul of the carrier's international division.

Additionally, while Mr Luxon has performed well in his 13 months in the airline's international division, he has many other areas of the business to better familiarise himself with. Mr Fyfe's legacy at ANZ is turning around the flailing carrier and creating a highly engaged staff that is one of the world's most respected. It is these people, core to ANZ's brand, that Mr Luxon wants to know and gain their backing before taking the reigns. He seems set to continue Mr Fyfe's hands-on role and direct connection with staff, terming ANZ an "awesome company" and promising his tenure will come with "a lot of fun along the way".

Mr Luxon joined ANZ in May-2011 as Group General Manager International Airline, only his second company he worked for, having spent his professional life with the Unilever consumer goods group. Mr Luxon started with Unilever in his native New Zealand and worked in Australia, Asia, London and Chicago before becoming president and CEO of Unilever Canada.

A future 'all about growth'

ANZ was thrust into the limelight last year after disclosing it would restructure its long-haul division, which was losing in excess of NZD1 million (USD791,000) a week on approximately 40,000 weekly seats. Interest was high as the restructure followed Qantas', whose international division was also loss-making. But ANZ's international restructure was relatively limited with minor adjustments to its North American schedule, consolidating its mainland China presence at Shanghai and switching partners in Japan from Japan Airlines (JAL) to Star Alliance's All Nippon Airways (ANA). While Qantas has announced further cuts, and flagged additional ones, Mr Luxon views ANZ as being in a position to expand, especially with the long-haul sector expected to be profitable in FY2013.

"I see a future that is all about growth," Mr Luxon said following his appointment. In particular he sees "huge opportunities" over the next 12 months and expects to spend the next six months identifying the opportunities. Indeed, some route launches may occur before Mr Luxon takes over. Mr Fyfe has recently discussed opportunities to grow in North America, including additional services to existing destinations of Los Angeles, San Francisco and Vancouver, as well as new destinations. Mr Fyfe has mentioned Denver and Houston as possible candidates that the airline could serve in the near future with existing equipment and not having to wait on forthcoming Boeing 787-9s.

The US market has become increasingly strong for ANZ this year. The economy is growing, albeit slowly, and the consolidation US carriers are practicing on the trans-Atlantic market has bolstered ANZ's Los Angeles-London Heathrow service, which originates in Auckland.

Mr Fyfe has said the performance of its US routes has improved over the last six months. The competitive landscape has also changed. Qantas in Feb-2012 announced it would withdraw Melbourne-Auckland-Los Angeles services in order to re-deploy the aircraft into its more lucrative domestic market. The change returned the New Zealand-US market to a monopoly position. 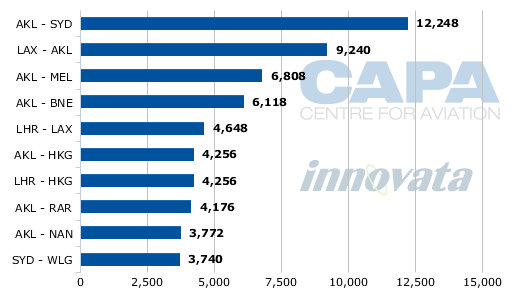 The recent decision by United Airlines to cancel plans to re-enter New Zealand with a Houston-Auckland 787 service ensures ANZ will continue to reatin its monopoly position in the New Zealand-US market. United officially blames the cancellation on Houston permitting competitor Southwest to construct an international terminal at Houston's smaller Hobby Airport. But more likely is that United fell out of favour with the route, which was announced by Continental prior to the Continental-United merger.

Onward feed from Auckland would have been critical and ANZ, the only major carrier at Auckland, had lukewarm reception to a new competitor. Continental selected the route to have a Pacific presence without clashing with ANZ's dominance on the west coast (Continental also had little feed there) or United's services to Australia. Following the merger and realignment of network priorities – a stronger focus on using 787s to replace older aircraft rather than open new routes – a service to Auckland was no longer critical, especially with United's Australian services being in low demand at certain times of the year.

Possible ANZ services to Denver or Houston would tap United's large network feed there. United is particularly keen to boost its Denver market and reduce reliance on local traffic, which has fallen under greater LCC competition. United's own Tokyo-Denver route will help that objective.

ANZ had delivered a vague response when Continental announced Houston-Auckland in May-2010, saying it was supportive of moves that would benefit the New Zealand economy, but more recently Mr Fyfe criticised Auckland Airport for offering discounts to Continental/United and looking to secure a new US carrier to Auckland instead of looking at a hometown option. ANZ will likely aim to launch new US services before the commencement of the peak southern hemisphere travel period in Dec-2012.

The US market in the medium term also holds the potential of ANZ working with partner Virgin Australia should the latter route its non-stop US services via Auckland to reallocate ultra long-haul aircraft.

Outside of the US, ANZ's growth will be challenging. ANZ has consolidated its mainland China position around Shanghai, dropping twice weekly Auckland-Beijing service and adding a fifth weekly Auckland-Shanghai 777-200 service and, by the end of the year, bringing the Shanghai route to daily, although additional frequencies will be operated by the smaller 767-300. ANZ faces competitive pressure in China that is growing: China-New Zealand air services were confirmed in Apr-2012 as expanding to allow airlines from each country to operate 21 weekly flights.

ANZ is unlikely in the near future to use the additional services while Chinese airlines, which have lower prices, will make greater use. But ANZ for now retains its valuable slots at Beijing, which give it the option of resuming Beijing services should market conditions warrant. The slots, however, will eventually have to be returned should ANZ opt not to resume Beijing in the next year or two.

ANZ is still honing in on deploying 787-9s, for which it is the launch customer, to Asia and possibly North America. While the aircraft will deliver improved efficiencies, those benefits also flow to competitors taking the 787 or A350.

Still, Mr Luxon is upbeat on the opportunities he sees, saying the "question is on how to access it". Growth will occur via its own aircraft, such as to the US, and also through partnerships and alliances, which will have a critical role in securing success. Mr Luxon pointed to ANZ's recent switching of Japanese partners from JAL to ANA, which is Japan's largest domestic carrier and so has larger local distribution. With sales and distribution comprising a larger part of his career at Unilever, Mr Luxon can bring new ideas to ANZ to enhance what is effectively the centre of any airline, or as he termed it, "the engine room of revenue generation".

Mr Luxon and Mr Fyfe rebuffed suggestions ANZ as an end-of-line carrier faced with growth limitations. But one market that does look increasingly out of reach is Latin America. ANZ would ideally serve Brazil with a local partner on the other end, but current aircraft do not make the route viable and current Star partner TAM is becoming closer to its merger partner LAN, which is in the oneworld alliance. Other Latin American markets are unlikely to be viable in the medium term.

Quiet short-haul market is where the money is

While much attention is lavished on ANZ's long-haul network, it is the short-haul network that is the company's core. Its domestic and regional network is especially strong and is positioned for growth following an order for 12 ATR 72 aircraft.

The Trans-Tasman market to Australia is ANZ's largest and has been improving following the introduction of its new Seats to Suit fare structure and alliance with Virgin Australia, which has seen the introduction of new routes and also up-gauging Auckland-Perth from 767-300s to 777-200s. The change follows a trend of end of line carriers shifting assets from long-haul intercontinental routes to higher yielding regional markets. ANZ will also reintroduce services to the holiday destination of Bali in Indonesia. 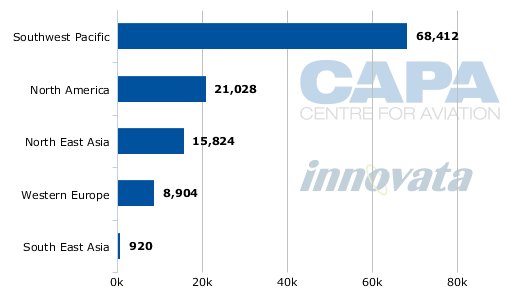 Mr Fyfe has stayed quiet on his post-ANZ plans and said that while he has had a few job offers, his focus is firmly on seeing ANZ out through the end of his contract expiring later this year. While international jobs have been floated for Mr Fyfe, he says he hopes to "find something here in New Zealand". His potential options are wide, having joined aviation as a newcomer following a career largely in finance and media.

Mr Luxon is also a relative newcomer to aviation, but as Mr Fyfe and others have shown, direct experience is not critical. Outside experience brings new views, even Mr Luxon's opinion that aviation is an "insane way to make money". Yet the industry may represent his largest challenge yet. Airline seats and belly space are merely perishable commodities where the costs and stakes are higher with less sophisticated seller control than in the retail sector. Airlines have stressed their need for better selling and to adapt practices used by the retailing rector, of which Mr Luxon has a deep knowledge. He may be the first airline CEO with such an extensive background in retailing – and if he can replicate his Unilever experience, he will not be the last airline CEO to come from retailing.

ANZ benefits from its lean structure to implement new ideas and selling practices. There has been some public discussion of what ANZ can be without its so-termed "rockstar" CEO. Indeed, Mr Fyfe has achieved the monumental task of taking ANZ out of an undesirable position to a solid and enviable platform. But Mr Luxon now may bring some of the most savvy practices yet to the industry, ensuring that no eyes are taken off ANZ.