The popularity of the current generation of narrowbodies continues unabated, with both Airbus and Boeing announcing strong orders for their respective A320 and B737NG families. While Emirates may have stolen the headlines with its order for 30 B777-300ERs, orders for narrowbodies totaled more than 150 aircraft, with leasing companies weighing back into the commercial aircraft market.

GECAS was the largest buyer, with orders for 60 A320 family aircraft and 40 B737NGs. Air Lease Corporation (ALC), the aircraft financing and leasing company recently formed by ILFC founder and ex-CEO, Steven Udar-Hvazy, announced orders for 30 A321s and 21 A320s. Norwegian Air Shuttle also weighed in to the narrowbody ordering spree, exercising an option for 15 B737NGs.

Apart from Emirates, the only other major widebody order of the first day came from Aeroflot, which confirmed a purchase for 11 A330-300s. Sukhoi had a breakthrough order in the Asia-Pacific, with Indonesia’s Kartika Airlines ordering 30 Superjet 100s. Embraer also announced a regional jet order, with five E195s going to Azul.

Boeing and Airbus are due to announce their decision on whether they will adopt new engines on their narrowbodies before the end of the year. Airbus reportedly plans to make an announcement by the end of Sep-2010, while Boeing confirmed that it would set a “strategic direction with respect to further developing the B737 and new airplane designs within a few months.”

With air travel returning, airlines are eager to see which direction Boeing and Airbus will take on the question of re-engining. The relatively lacklustre sales of the Bombardier CSeries, with just 90 orders in two years, stands in stark contrast to the popularity of the A320/B737NG. Bombardier is pressing ahead with the CSeries regardless, and is still confident that the aircraft will be a success.

In trading yesterday Bombardier was the biggest loser, down 6.5%, as the long-awaited CSeries order from Qatar Airways failed to materialise. Qatar Airways confirmed it is still interested in the aircraft, but unspecified issues have gotten in the way of negotiations.

Embraer and Boeing both posted strong gains, while EADS was also up, but not as strongly. European Transport Ministers from Spain, Britain, Germany and France confirmed they would continue to support EADS, Airbus and the A350 XWB programme with reimbursable launch aid instruments. The European Commission also confirmed it would launch a protest at the WTO’s repeated delays over its ruling on Europe’s case against US subsidies to Boeing. 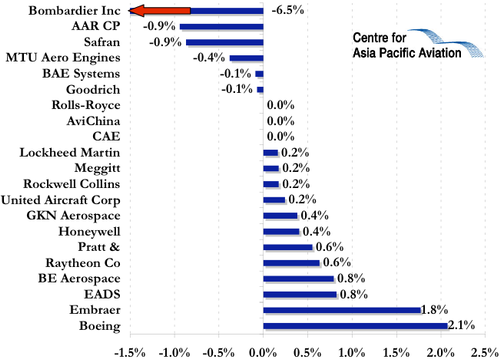 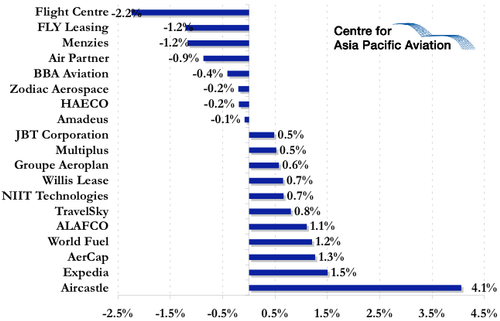